The dust is settling on a manic August personally, but September has been even more of a challenge, so far. However, when things are this crazy, I tend to find that I am drawn more and more to the calm of the painting table.
Add to this a new momentum brought about by last weekend's Wamp Workshop, where I met a great bunch of painty types, shared some knowledge, thoughts and stories, and drank copious quantities of rum - and beer with slices of orange in! Don't ask... - I have got it very much in mind to have a little clear through of part painted models from the desk, and to get on with my winter projects.
Mix in the fact that my first Kingdom Death shipment is en route, with the big box to follow in around 6 weeks, and I think that I ought to get on with it!!

The Workshop will get its own post in the very near future because there's a fairly large amount of photos to put up, but big thanks go out to Brett of WAMP for setting up the Kickstarter that provided the weekender as a pledge, and to Andy of 4TK gaming store for providing a comfortable, well set out place for our event. It really is ideal for painting and gaming gatherings - at the same time too, if needs be!

So, once I rebuilt my man cave, having dismantled much of it for the event, I sat down last night with some new brushes and some new paints and got busy tidying and progressing two models. It was one of those sessions where for the first half and hour I was wondering what the hell was going on, and by the end of it was wondering where the hell these new toys had been all of my life!

The paints were the Scalecolour flesh and Steampunk sets (both available via the Wampstore in the link above), and the one particular brush which may have changed the way I paint forever was the No2 Blender from the Wamp Select Series. This brush is a kind of "Filbert" shaped Kolinsky brush - basically a small flat brush which comes around into a tapered point. It allows fine detail work with the tip, wet on wet blending, glazing, and goodness only knows what else. So far it also seems equally at home on a 54mm model as it does on a 28mm one. It is just magic!
Now, I have a very particular style, so it may just be me that this brush suits, but the combination of this brush and the very particular properties of the Scalecolour paints made for some rather satisfying results, even over existing paint works. Base colouring using the Scale paints takes some getting used to, as they seem to move around a lot more than paints that I am used to, but the blended finish is really nice. With some more practice I am looking forward to seeing what I can come up with. I am also itching to try them out through the airbrush. :)

The JoeK minis Dragon Huntress herself is mostly painted, barring a few details, the hair and some tidying up. Then I will work on her shield and the actual dead dragon in the base. 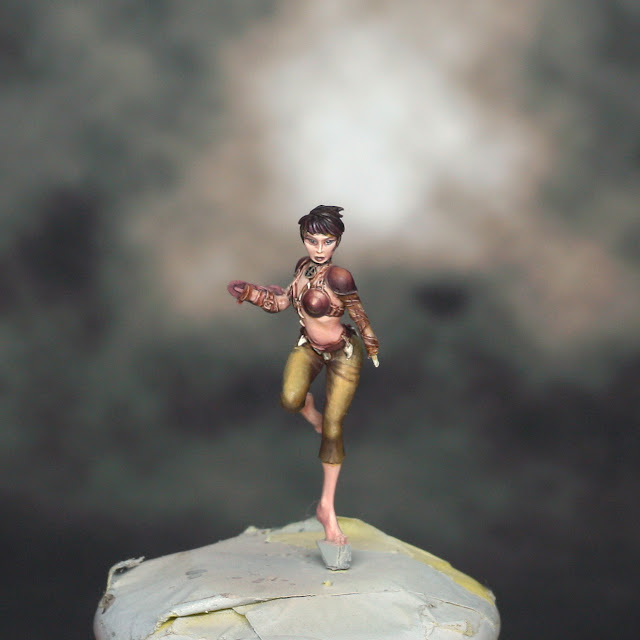 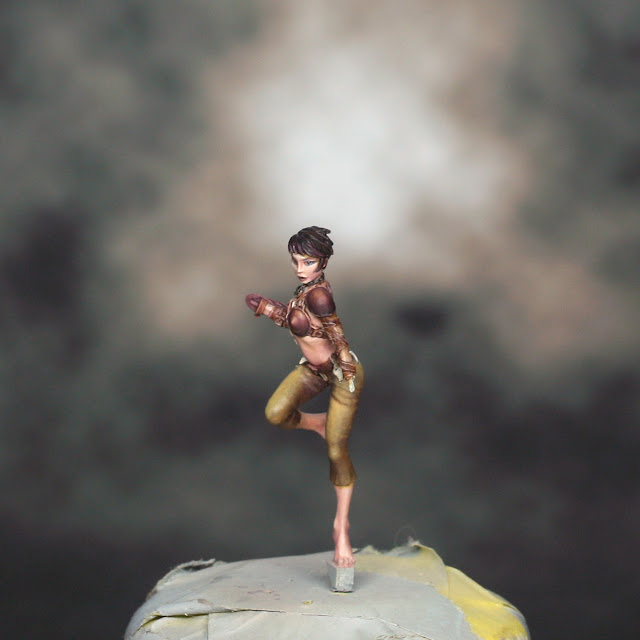 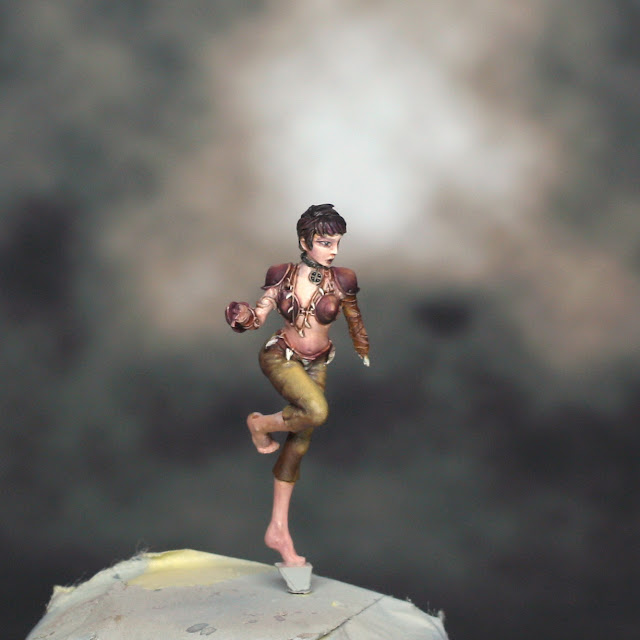 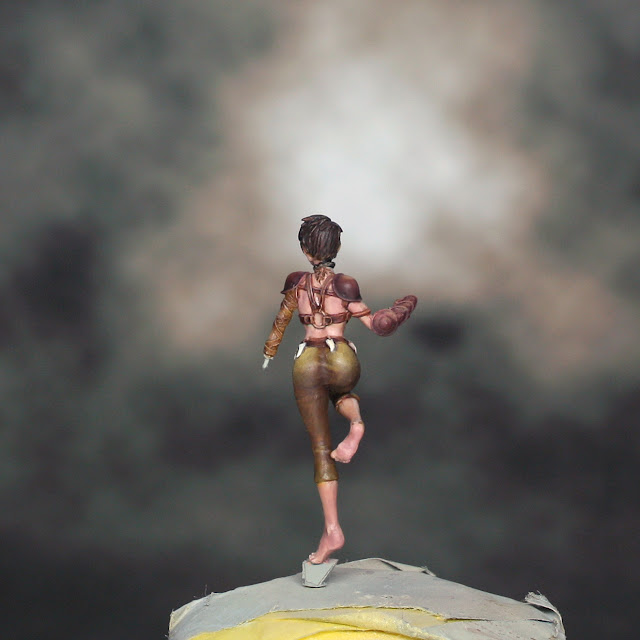 The Poppy's Angels piece is mostly finished in terms of skin, stockings and gloves. Need to do the scarf like the one on the chair, then add a little texture; then the final push will be the lantern/drip and books... 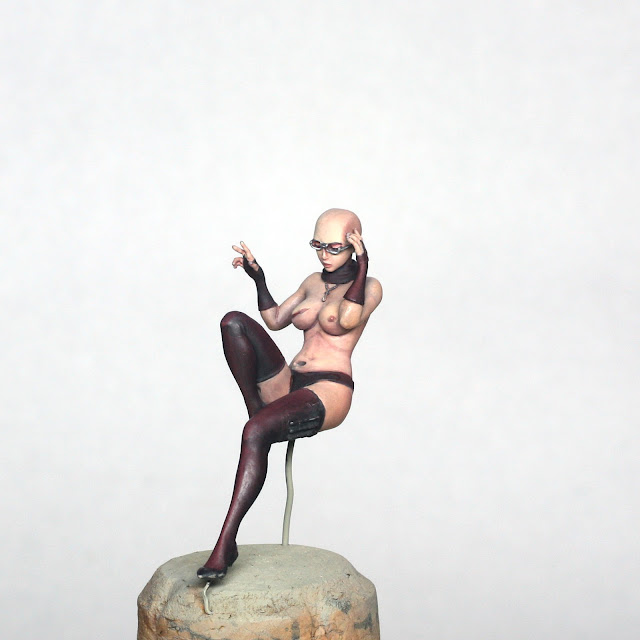 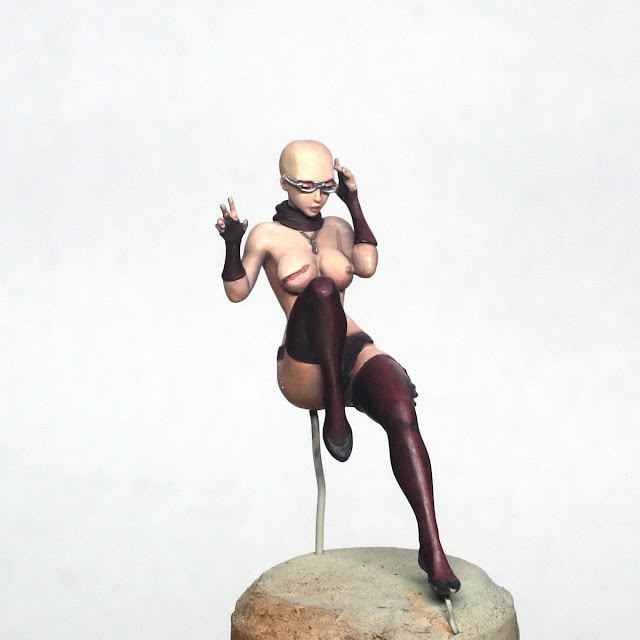 I'm thinking that I should actually use some metallic paint for the glasses and the details on her leg and gloves.
The shoes will be done in patent black finish, no tricks, just glossy black, which will be done when the whole piece has been matt varnished.

I'm keen to get these through now. There are a lot of toys on the way which will distract me, so I need to clear the decks and get myself set for the "end of term" after Euro, where I retreat to the cave and see out the winter! ^_^