It's been a little longer than hoped since the last post, but to be honest, I've been having a small block with regards to painting. I'm sure that all painters get them from time to time, and most either take a break until the urge came back, or push through until it feels more fun again - obviously full time pros have to do the pushing through bit!
Fortunately for me, I don't have to do this as a job right now, so I could "afford" to take a little time away from the table.
The reason for my block? I don't know, but I've been struggling with inspiration for my next piece and the piece after in terms of colour scheme for the current piece, and a setting for the next one.

Lets deal with the first one, Seb Archer's M'Dusa...
There's only a couple finished versions out there that I am aware of, the first is painted by the Twisted peeps - likely Seb himself, I'm guessing - and the other is a lovely colourful version by Marike Reimer. Both can be seen on the Twisted Games Facebook album.
I wanted to do something different. Initially I was thinking of how to apply snakeskin texture to the model, but she is so small that I just don't have the skills/inclination/patience (*delete where appropriate) to carry it off, nor do I have the vision in this instance as to where to apply said texture.
So, I spent at least a week procrastinating/researching what to do. Then last night I was having a little flick around and a Giger image popped up. Bingo! The kind of colours used in much of Giger's work was just what I wanted to try out, plus the details of the sculpt leant itself ideally to a Giger-esque scheme.
So, brush in hand, I set about her with renewed enthusiasm, and moved along quite quickly... 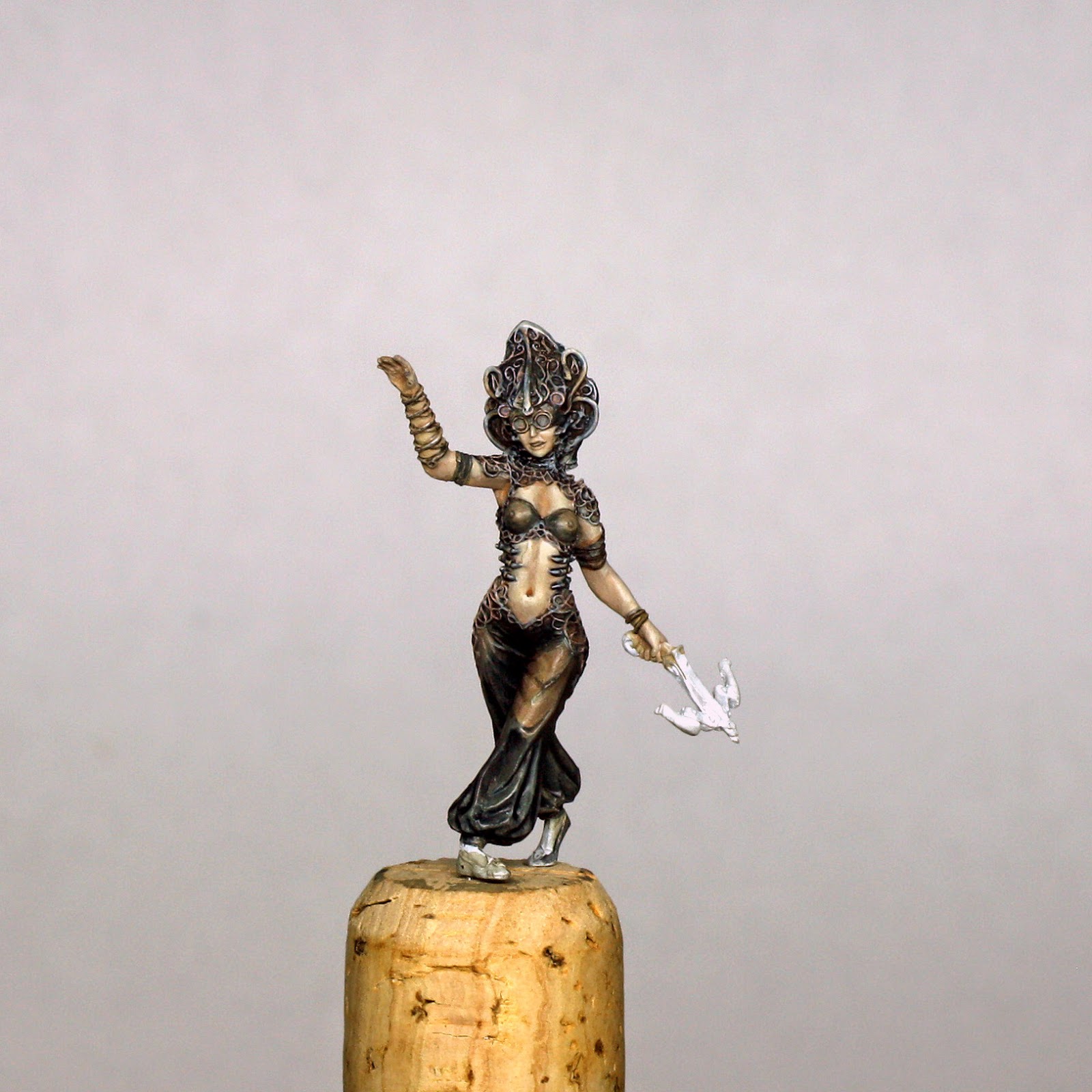 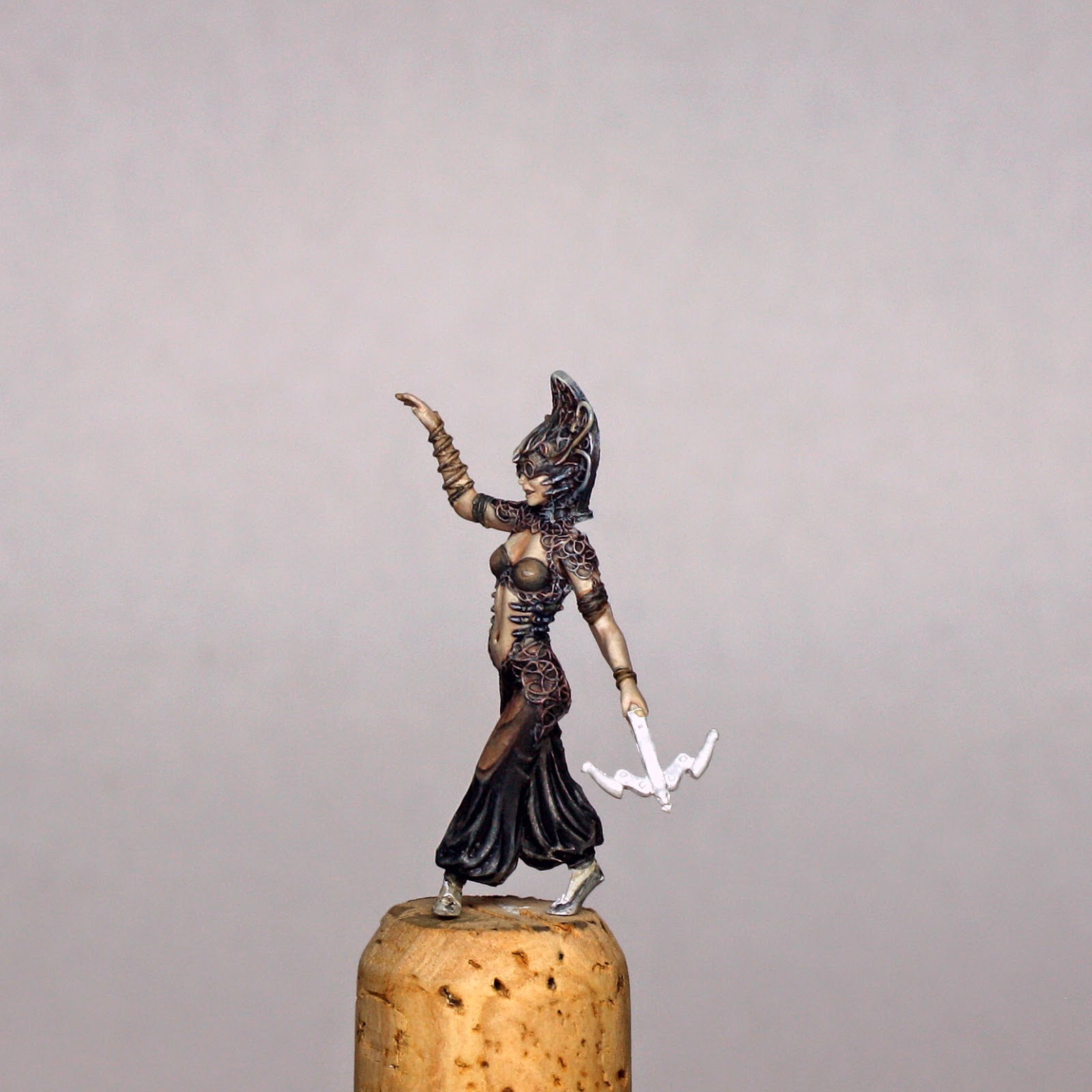 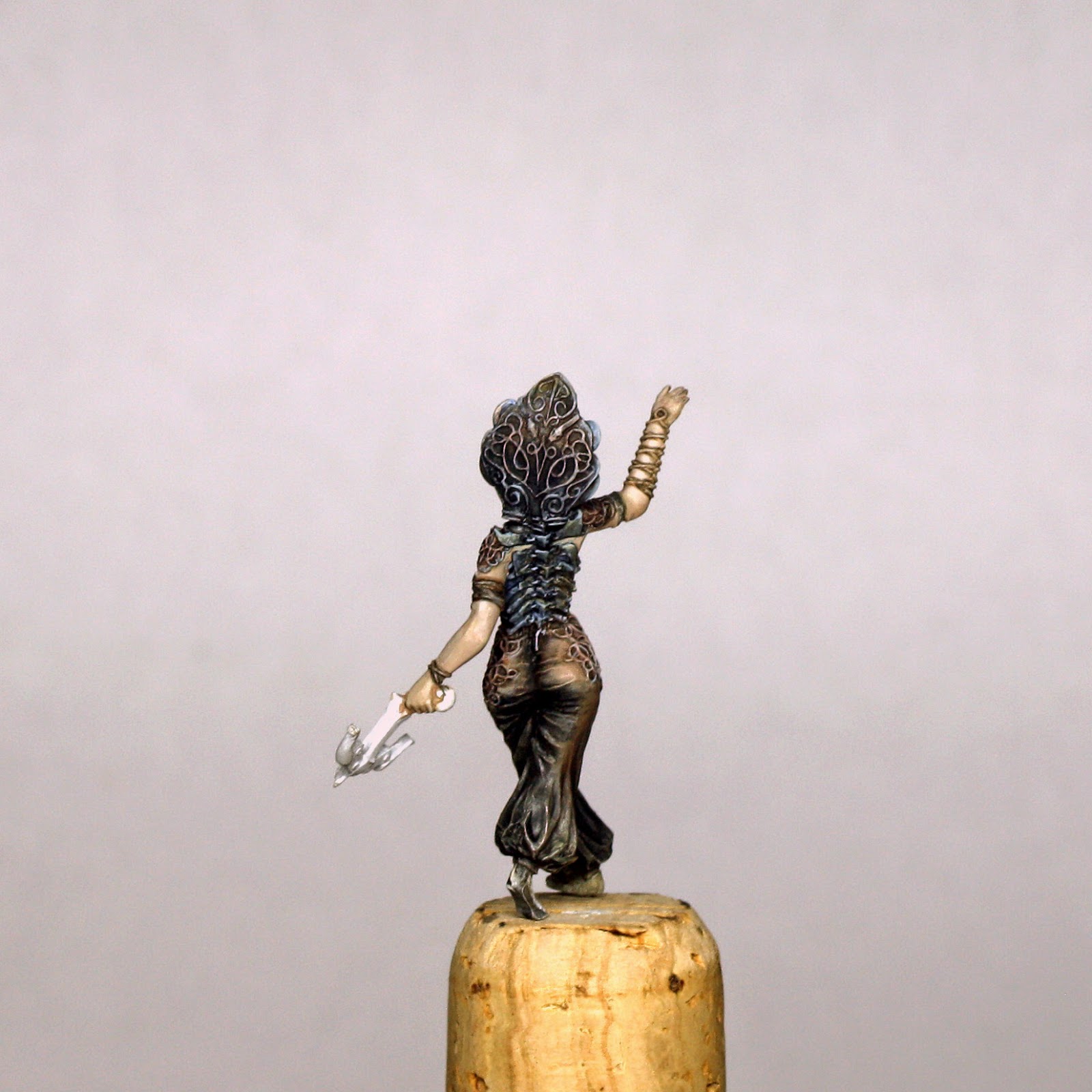 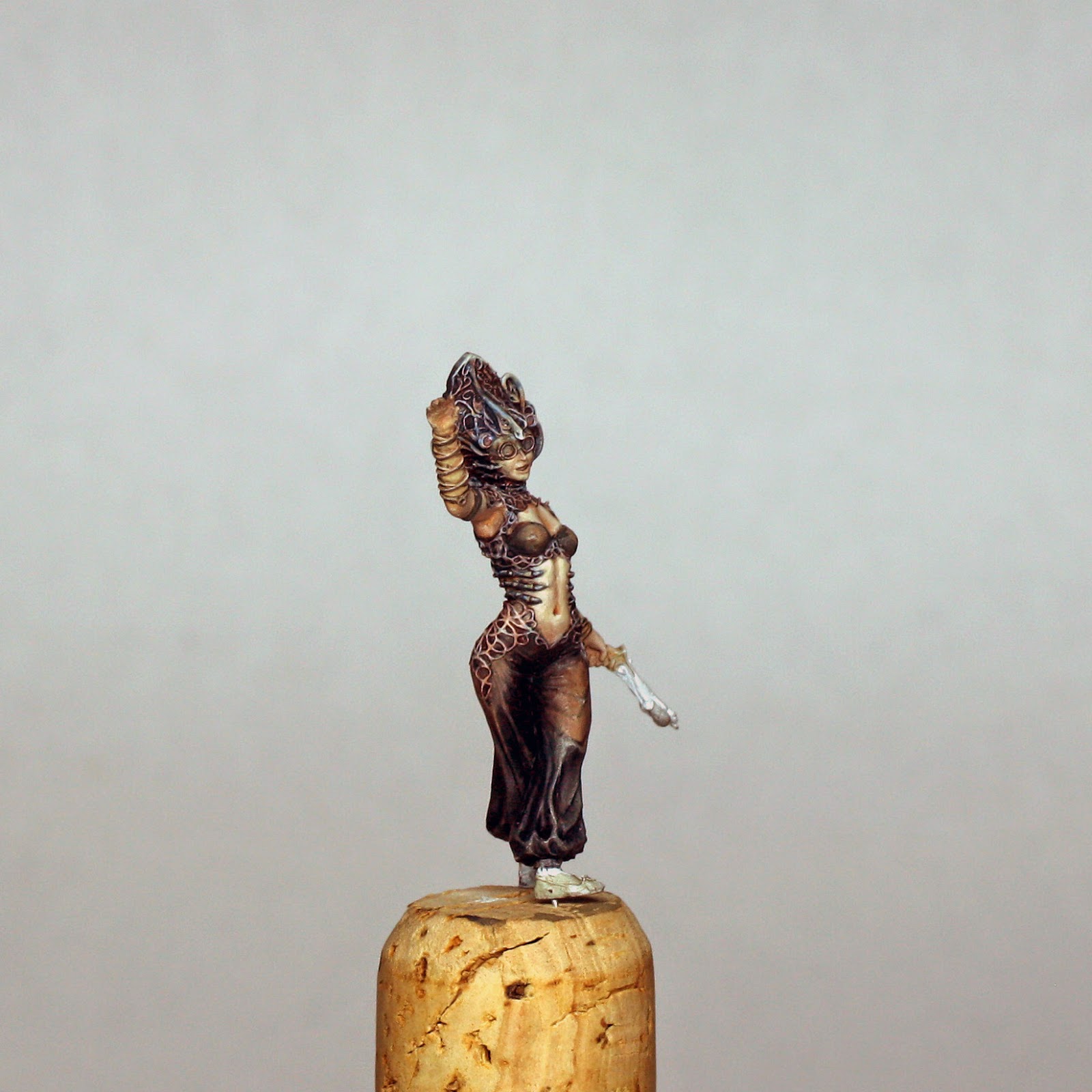 There's obviously a lot of tidying up to do, and also a lot of picking the details out before adding some more subtle tones - it is also rather glossy at the moment - but I'm quite pleased with progress so far.

After M'Dusa, I shall be moving onto Clio et Erato.

I've been looking at the comic strip that relates to this - spending quite a long time translating Italian into English! - and I think that I have an idea of the scenery that I want to do for them. Need to do a little bit of image searching, then I'll likely show my plans in the next instalment or so.

In other news, I received a rather wonderful, and unexpected, parcel last week from the gang at Kingdom Death, with a nice note attached too. Inside were some samples of the plastic pinups that will come with the expansions on Monster - which now appears to be moving towards its later stages of production at last - I shall be putting these together very soon and doing a new series of articles to accompany them. This may mean another quiet period, but not for a few weeks at least, as I have plenty to keep me occupied.
Yay for Kingdom Death! ^_^

In a slight aside to my usual flagrant self promotion (lol), I would like to point you, dear reader to a few places that I visit (perhaps not as often as I ought to...!)

David Zabrocki's site - www.davidzabrocki.com - an inordinately talented chap, who I believe paints almost entirely with enamels(!!). A top guy who I have been able to get to know a little over the last few years while attending Euro Militaire, where he is also a judge. Really inspiring painted works indeed!

Damien Pedley's blog - http://deespaintfilledhellhole.blogspot.co.uk/ - Another rather talented chap, who tends to do Games Workshop stuff, but with his own twist.

Rafael Garcia Marin's blog - http://volomir.blogspot.com - Won just about everything to do with paint, so why wouldn't you look!? ^_^
Plus he was gracious enough to pick out my Lion God as a model to watch out for recently too, so one good deed deserves another ;)

His blog is actually already on my Shiny Blogs list, the link to which is on the right side of the page ------->>
So, be sure to check out the links on there.

Another one bites the dust...

Since the last post I have been mostly weaned off of Drop Assault, preferring to get back to the desk a bit more and push Shido'ni along - Well. When I'm not hooked on Walking Dead or Fortitude or on who killed Lucy Beale (yeah, I'm a part time Eastenders watcher... What?! *_*).
Fortunately I had chosen to go for a super simple cracked desert base, so once the actual painting of the model was done, the base was mostly washes and pigments - and a load of sanding where I hadn't prepared the plinth properly...

In the end I'm quite happy with the amount of weathering that I've put on, and most of the rest of her too. The shoulder and gun icons were a cause for annoyance, to the point where I repainted 3 or 4 different designs before settling on the one that you see below. 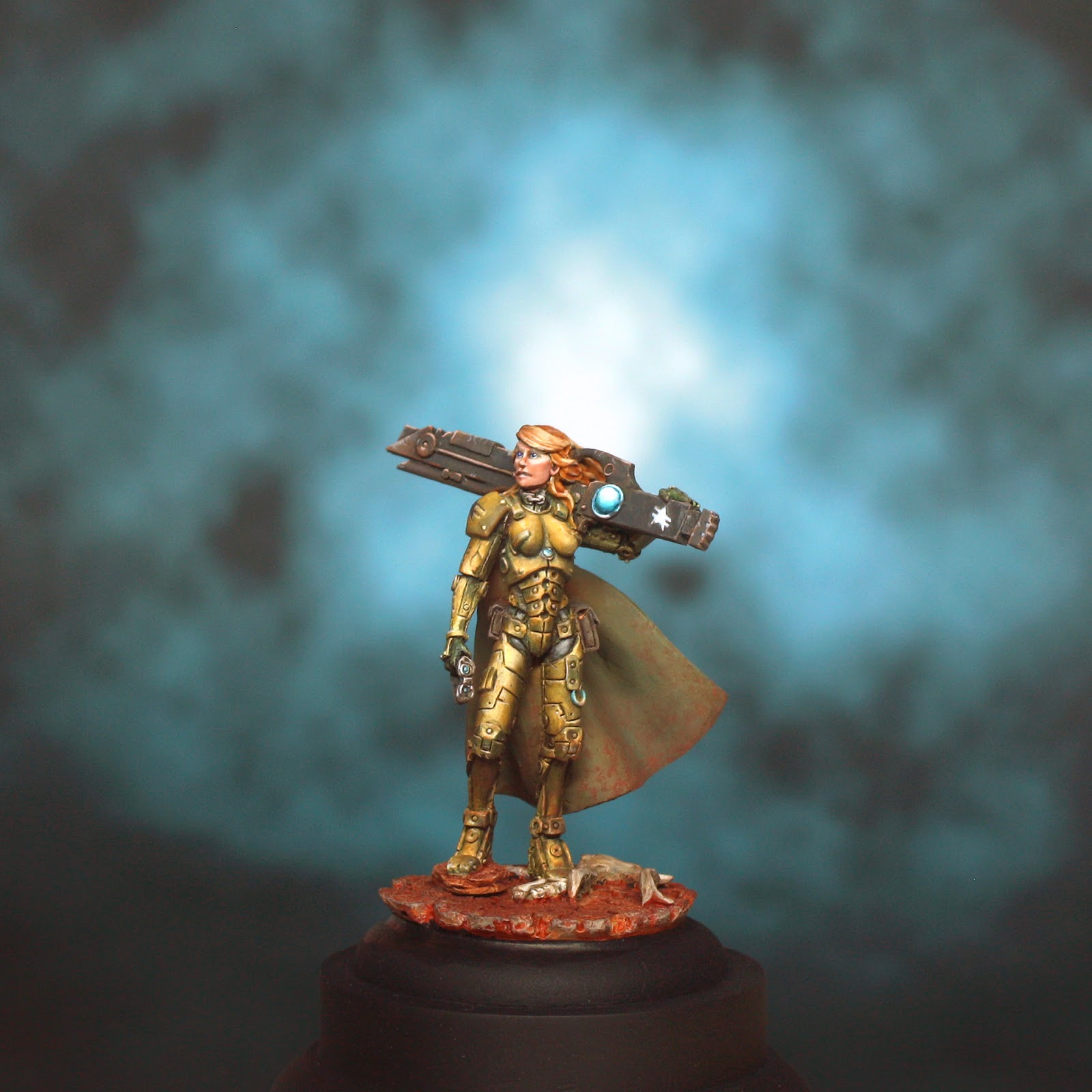 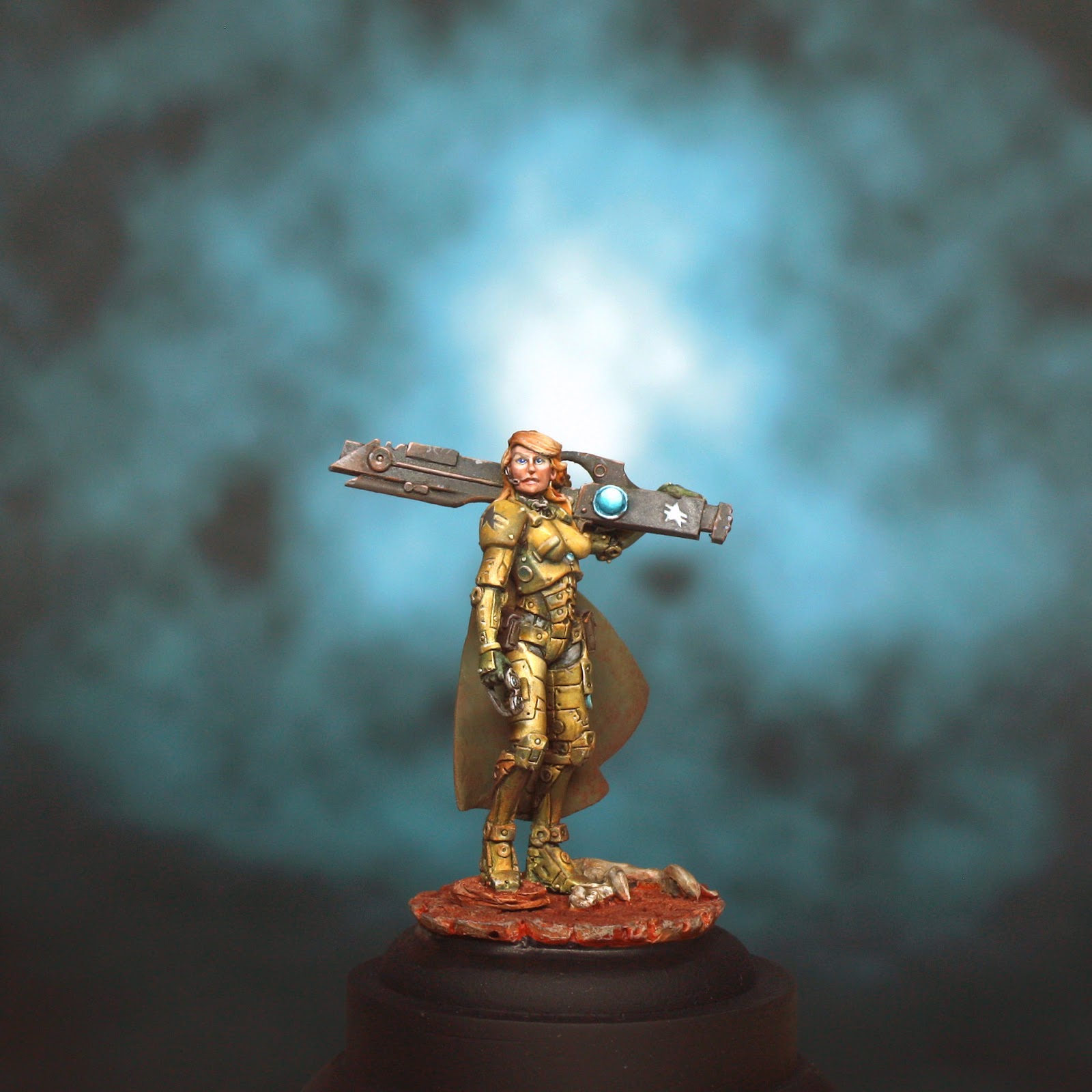 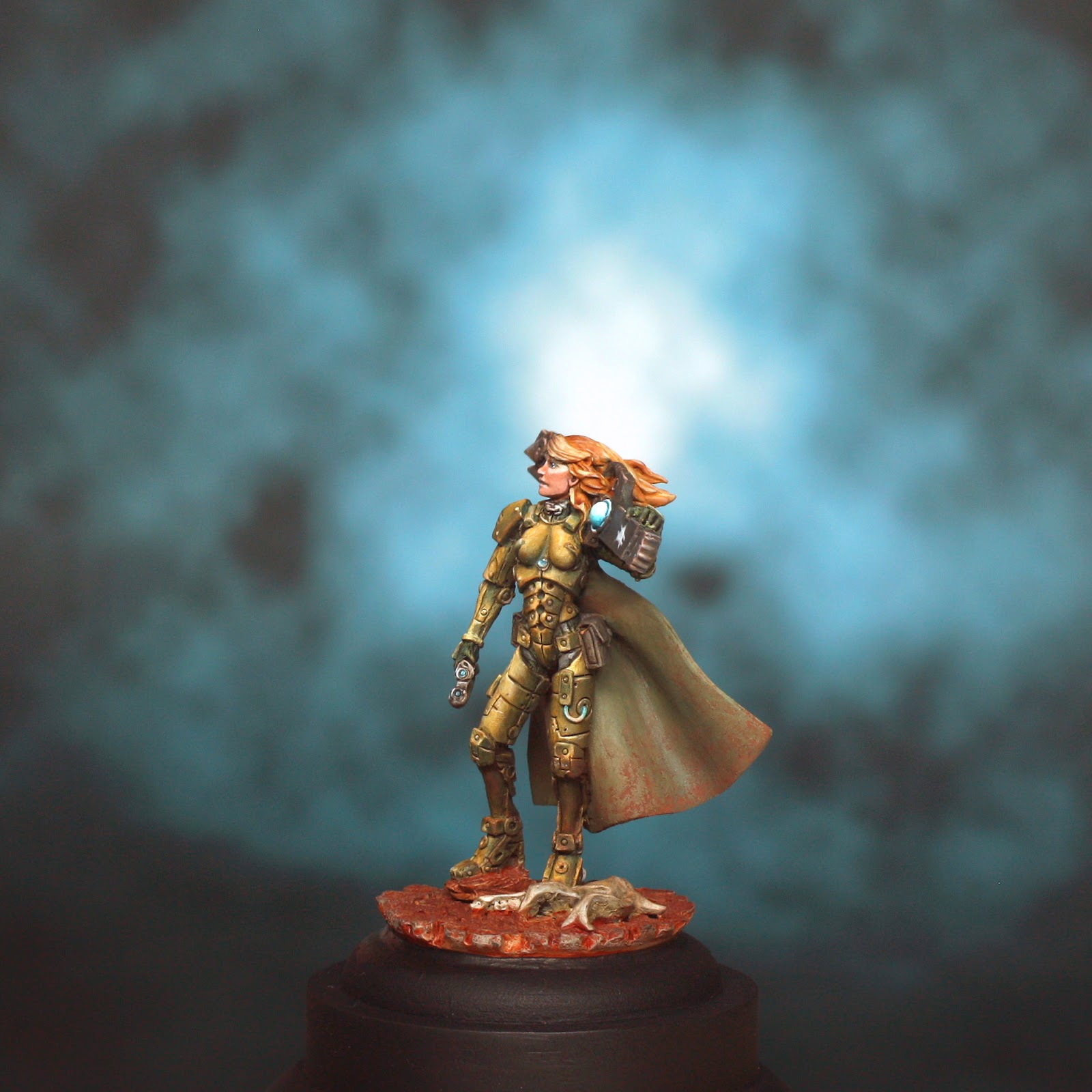 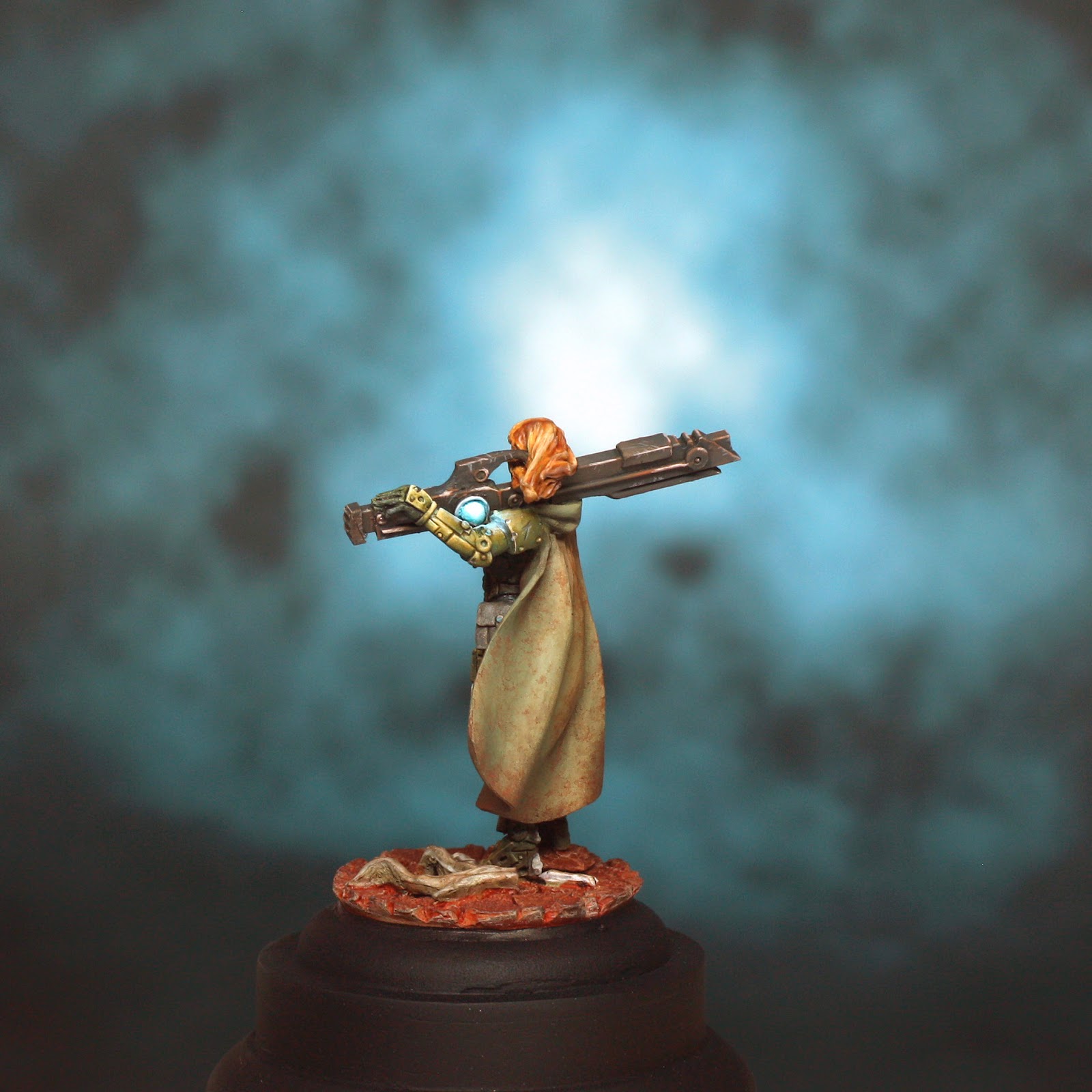 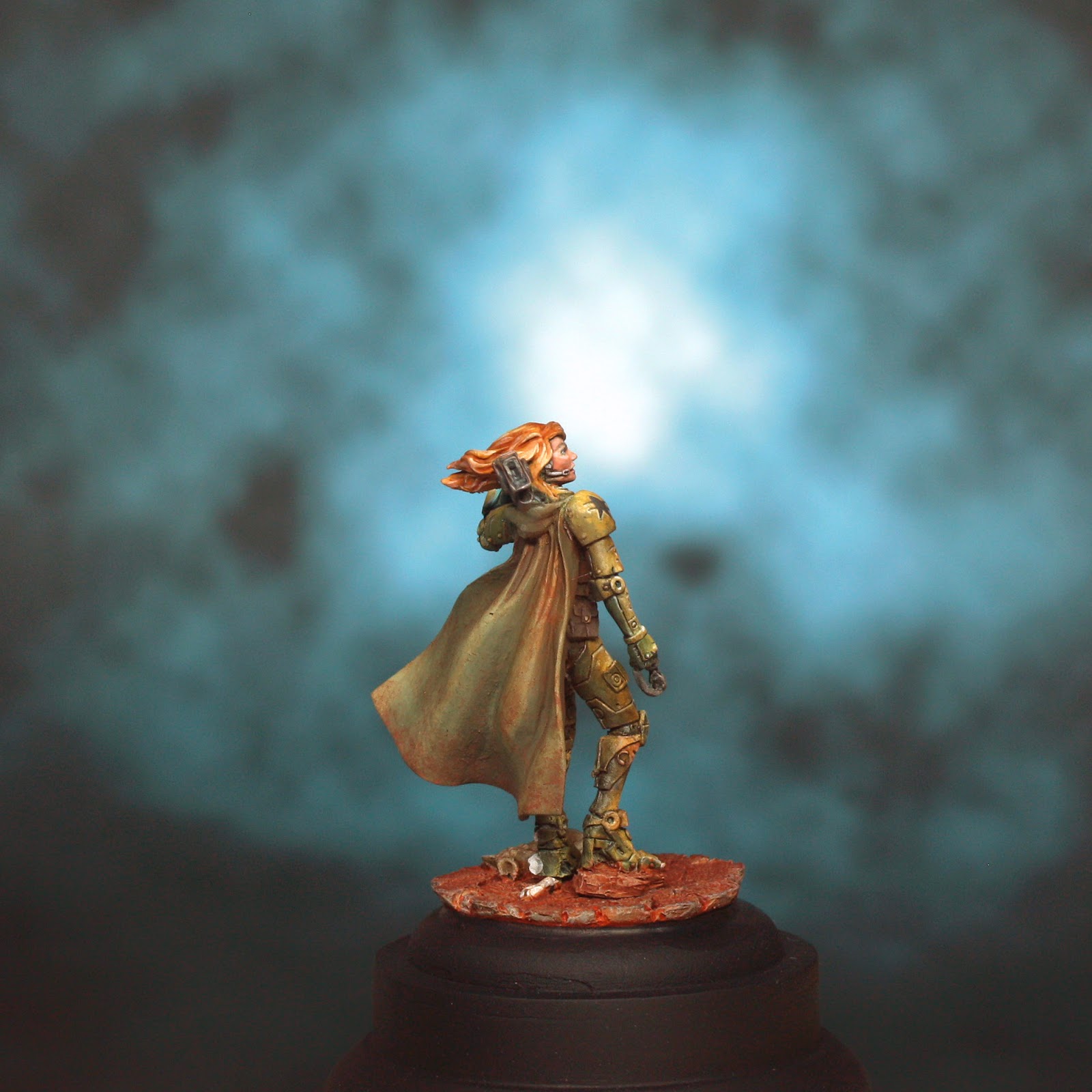 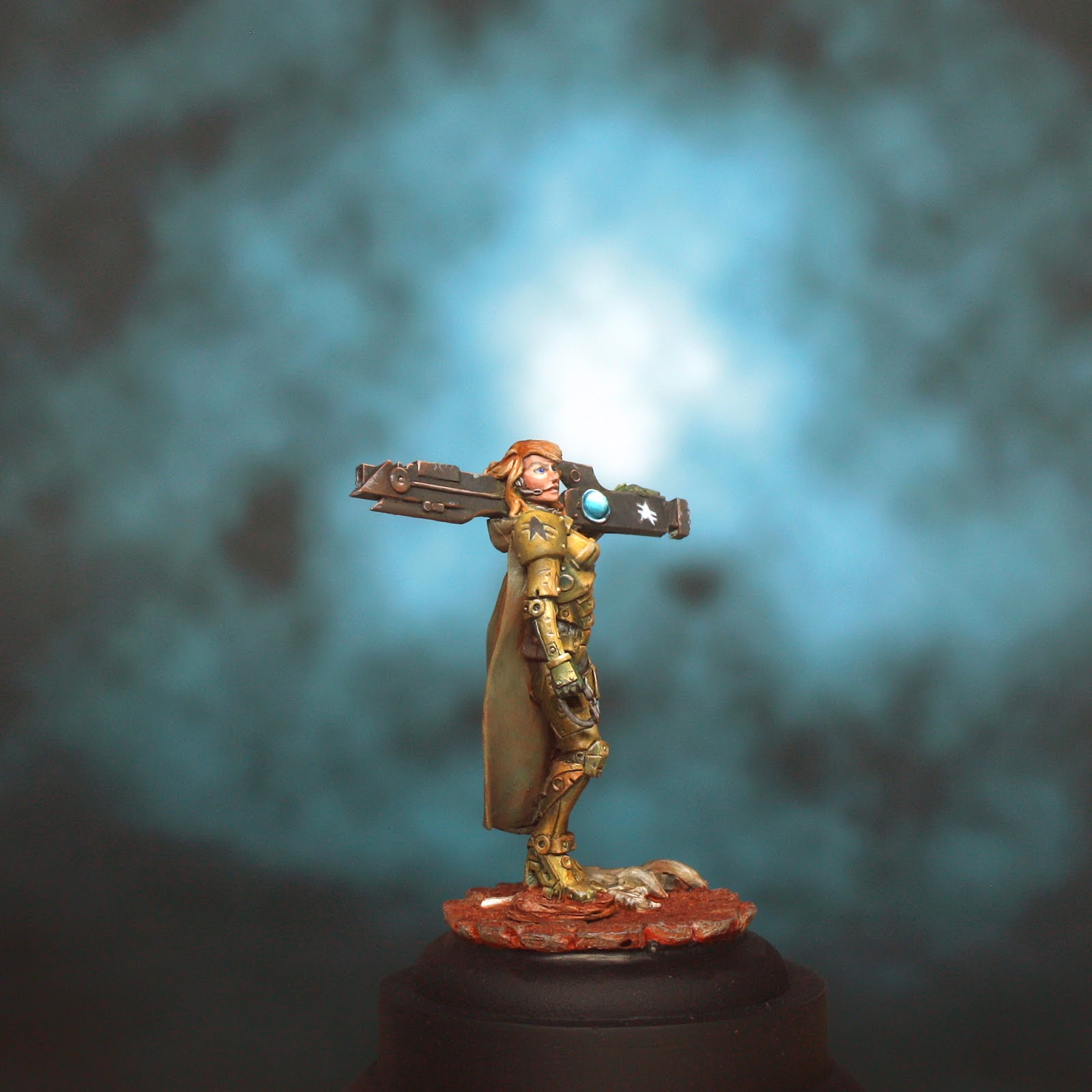 I am most happy with her face, and eyes in particular. I wanted to get the wind burnt face and goggle marks, which I just about managed, but the sculpt of the eyes really needed me to get them just right, and I do think that I got that about as right as I could do.Hopefully you do too ^_^

As usual, here are the links to her on COOLMINIORNOT and PUTTY & PAINT

If you like her, please do stop by and leave a comment/vote. They are all appreciated. :)

Next on the corks is Twisted's M'Dusa, who I previewed in an earlier episode. She will also be a "simple" paint the model and stick her to the base job, but I am about to start researching snakeskin... gulp!

I also was the very fortunate recipient of a lovely present today. One of the regulars over on the Kingdom Death Kickstarter page sent me the Wrath of Kings Twilight Knight special model...

With my (obvious) affinity to all things KD, I shouldn't be surprised if she doesn't end up on the corks very soon. Thanks very much Alice! ^__^

That's it for now. My usual Thursday painting session will undoubtedly be mostly spent watching the 'Enders 30 year live show... Too. Much. Drama. Lol.
Posted by Unknown at 22:45 No comments: 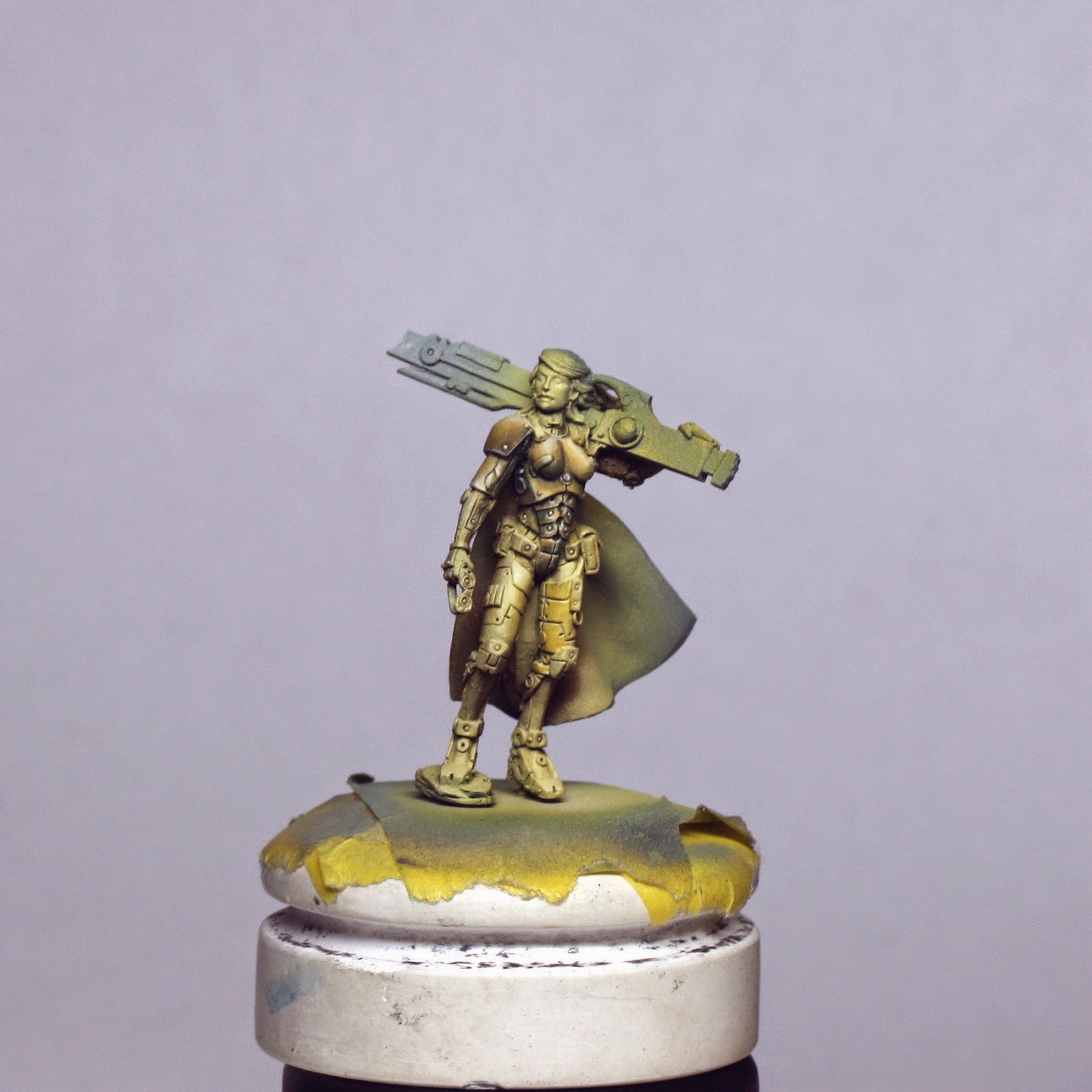 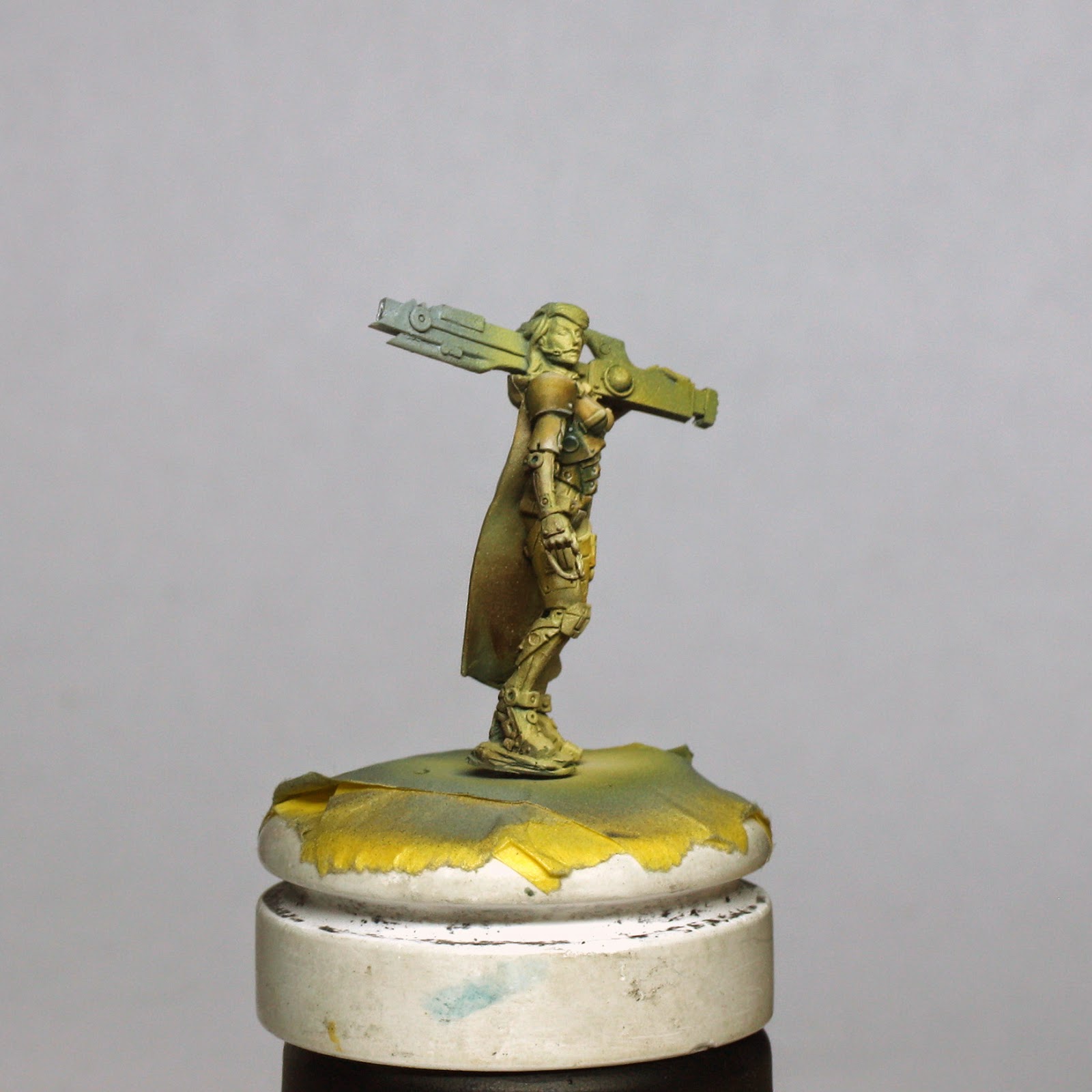 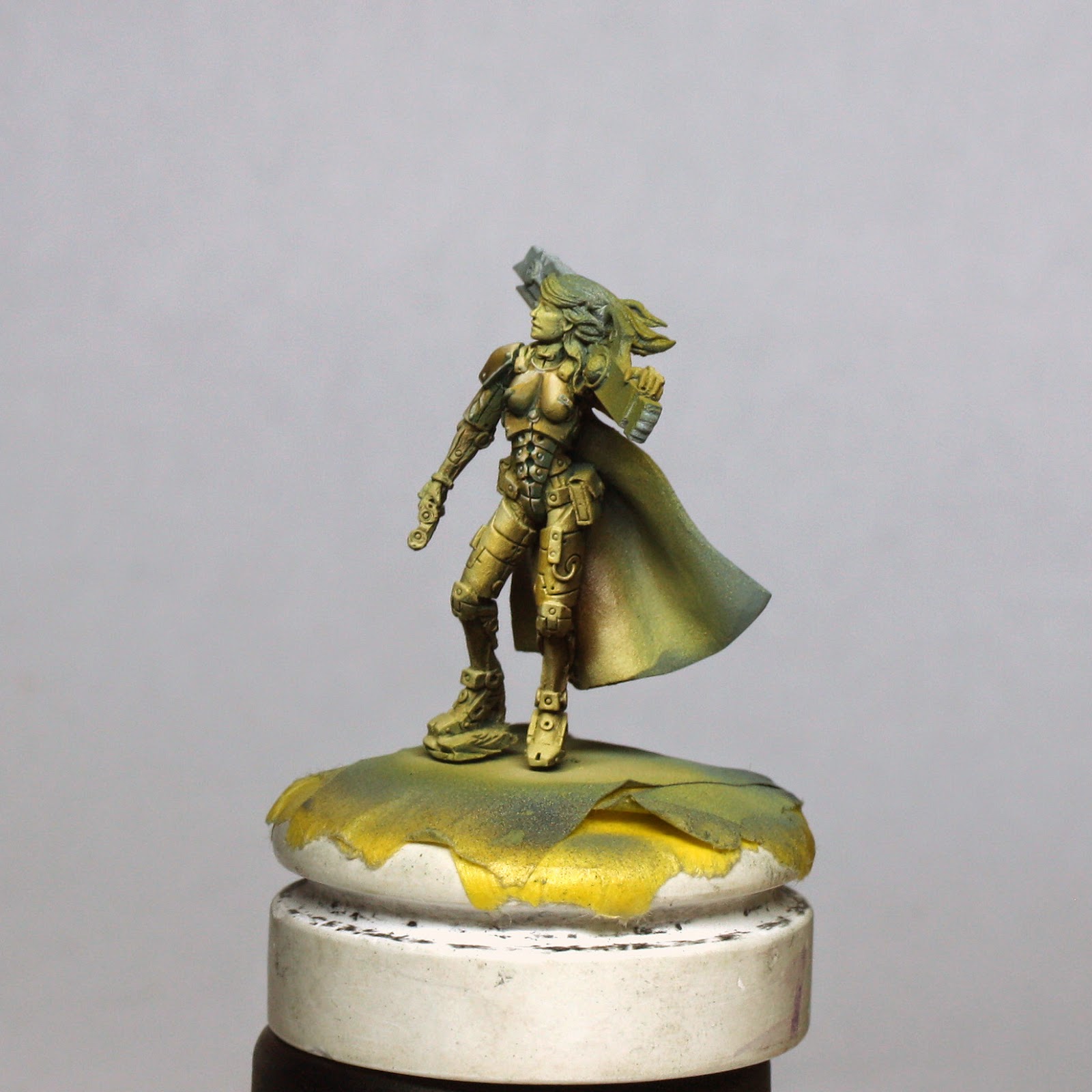 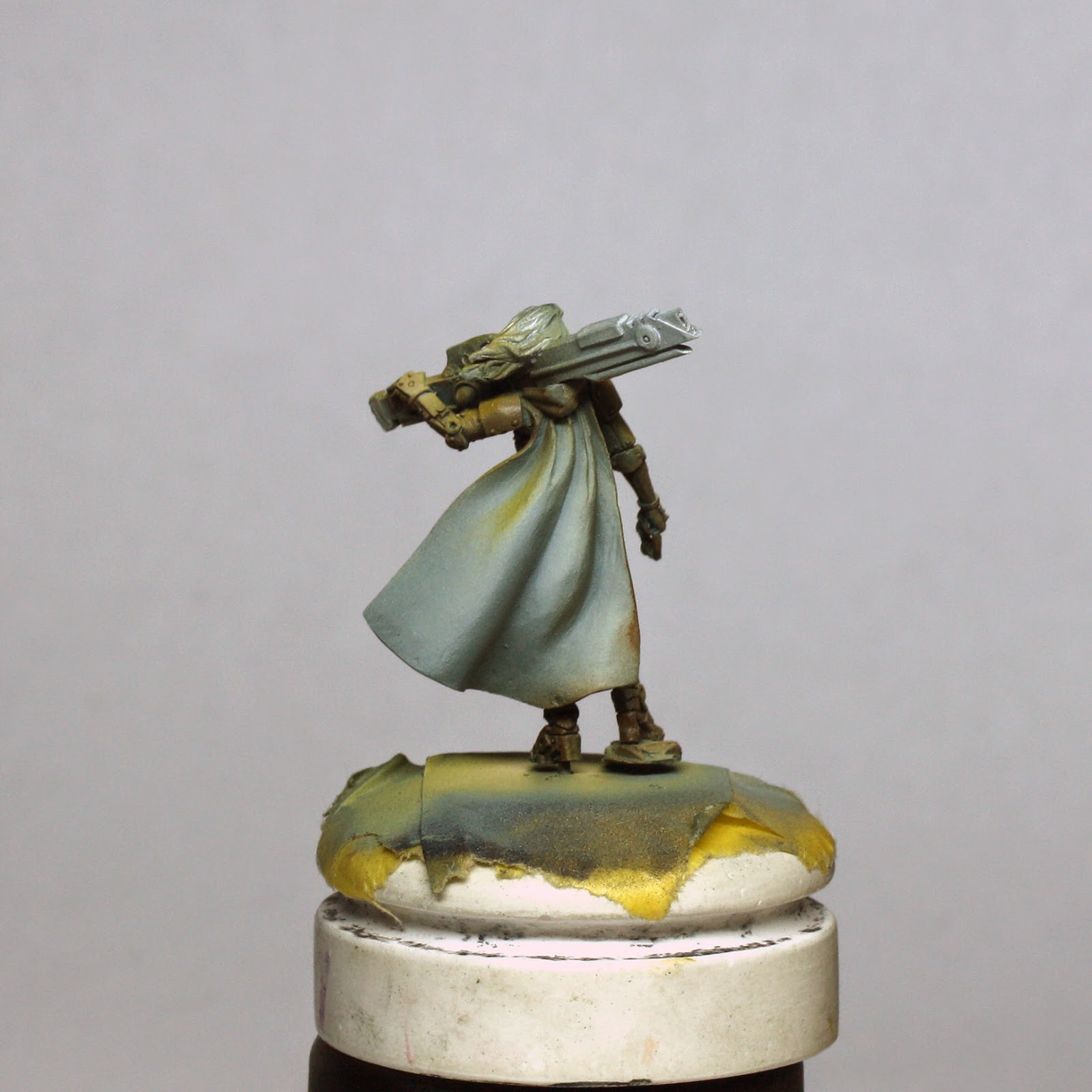