It's been a little longer than hoped to get around to this post, but work life has been so busy that there's been almost no time or inclination to collect my thoughts.
However, in a bid to somehow take control of things while so many things - like the weather affecting work - are beyond my direct control, I've had a bit of a clear out/up of the desk and man cave. Much of this is just putting stuff away that I got out to use and just shoved to the back of the desk rather than put it away, or shredding old credit card statements. That said, moving the stack of boxes and packaging from mini related purchases to the garage required quite a large box! lol

I might get a photo of my work space and cave in general up at some point, but I am probably regarded as a little too tidy for most people's liking! ^_^

Part of the clear up though was to get some models finished off before I could make a start on the next, and with that in mind, I've finished (start and finished in a couple of cases) a few pieces off and placed them in the cabinet.

First of all, I finally, finally finished the Painting Buddha vignette. I reworked the visor on the alien girl, and that was about it.... 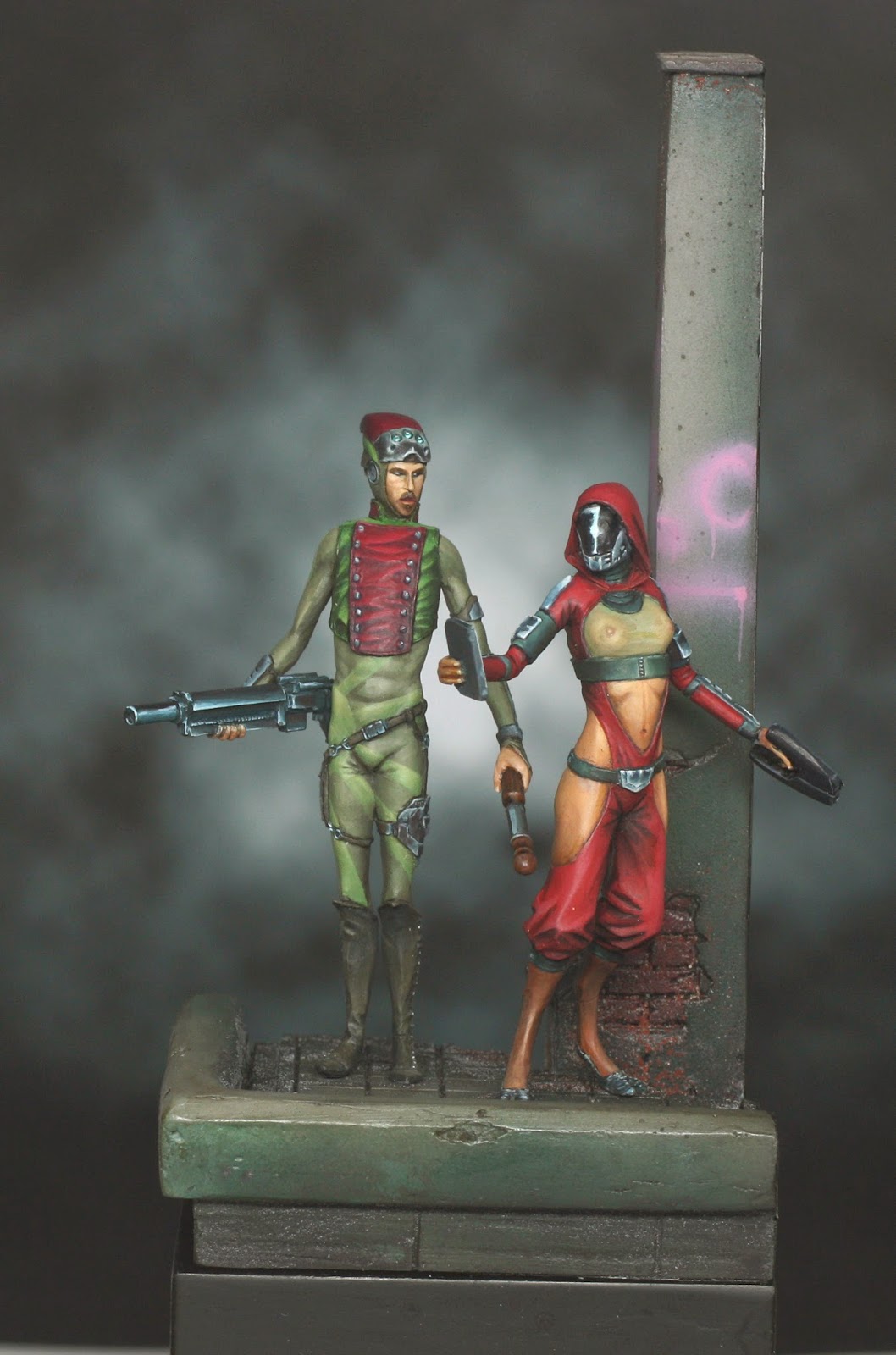 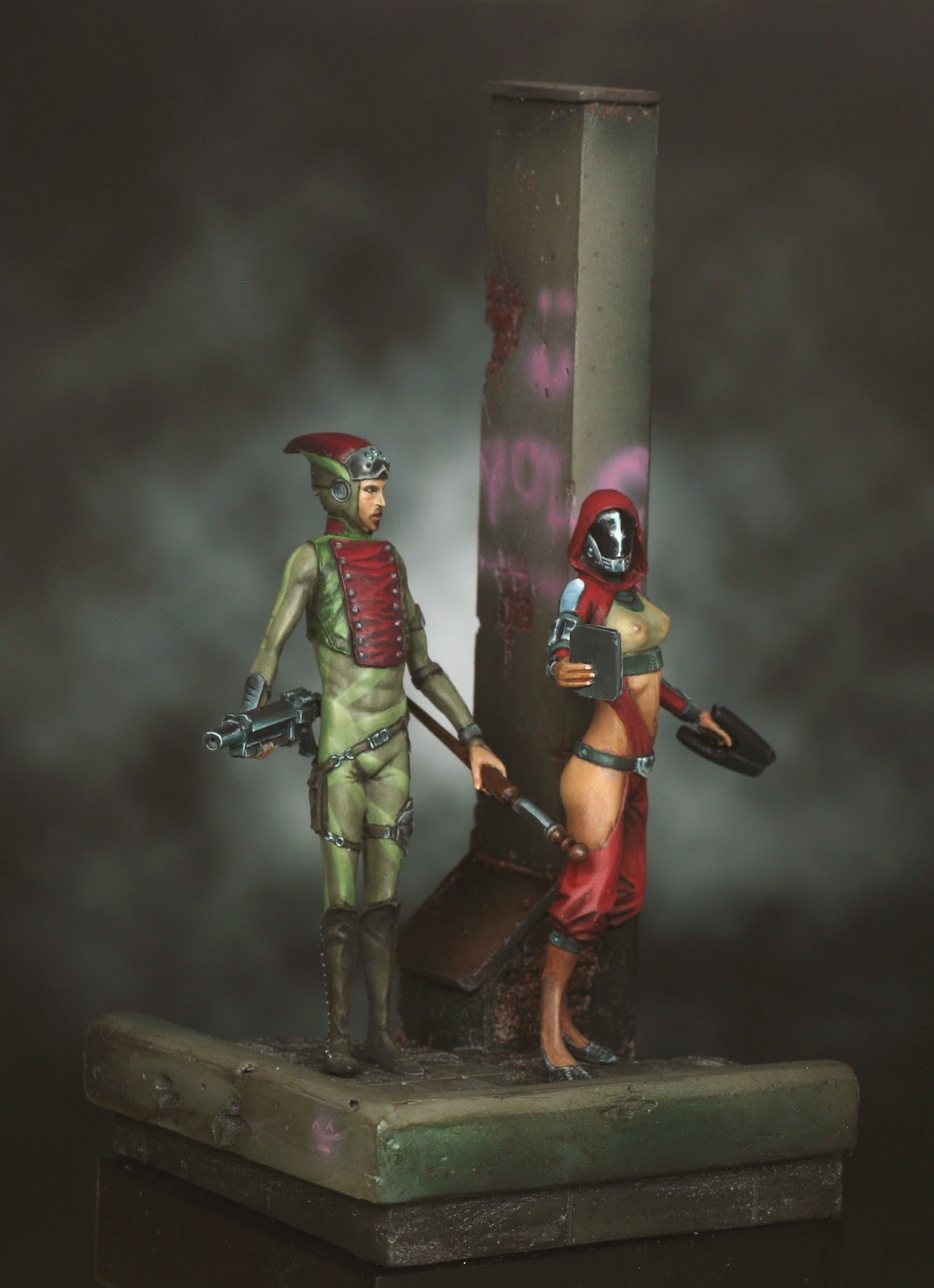 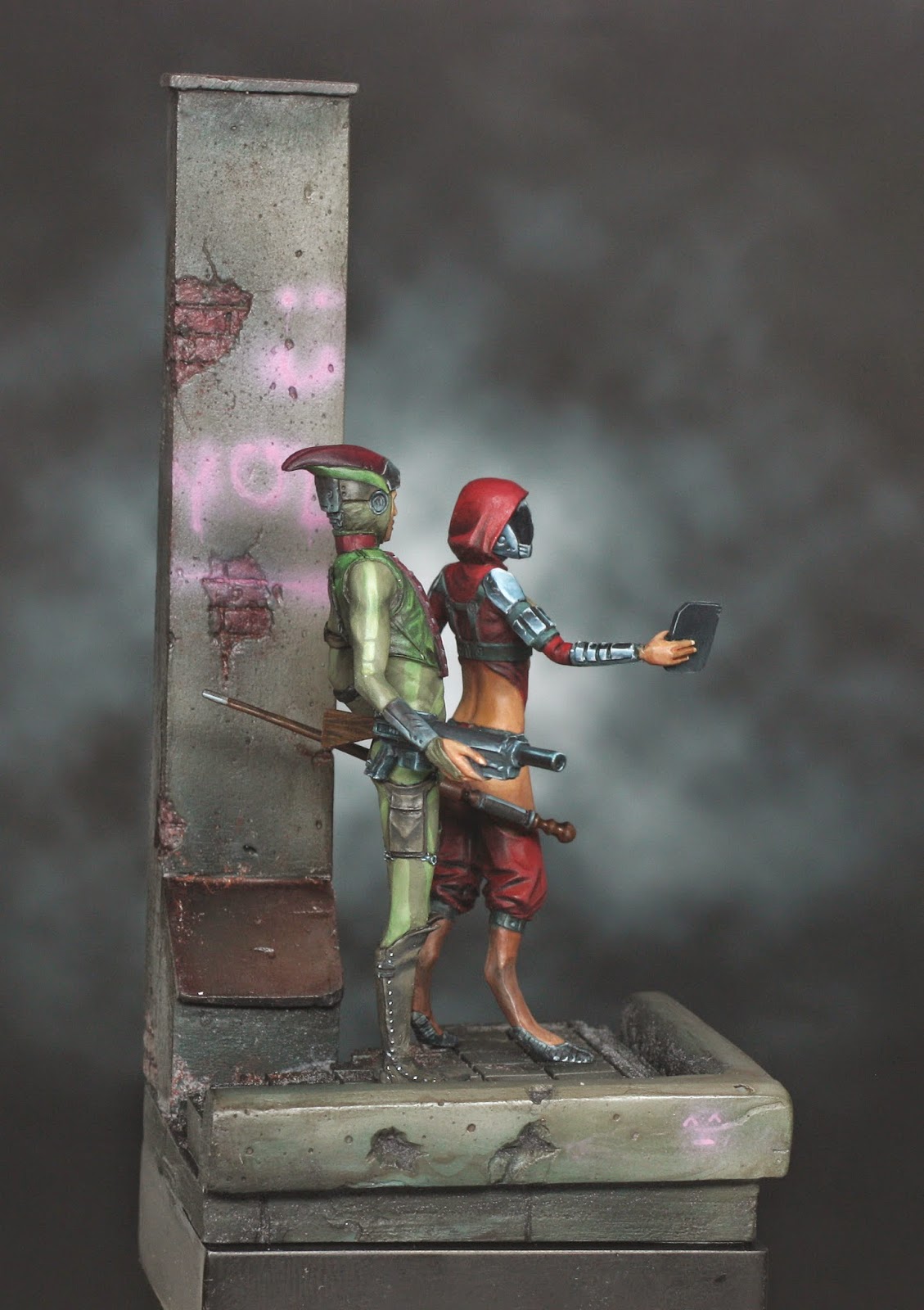 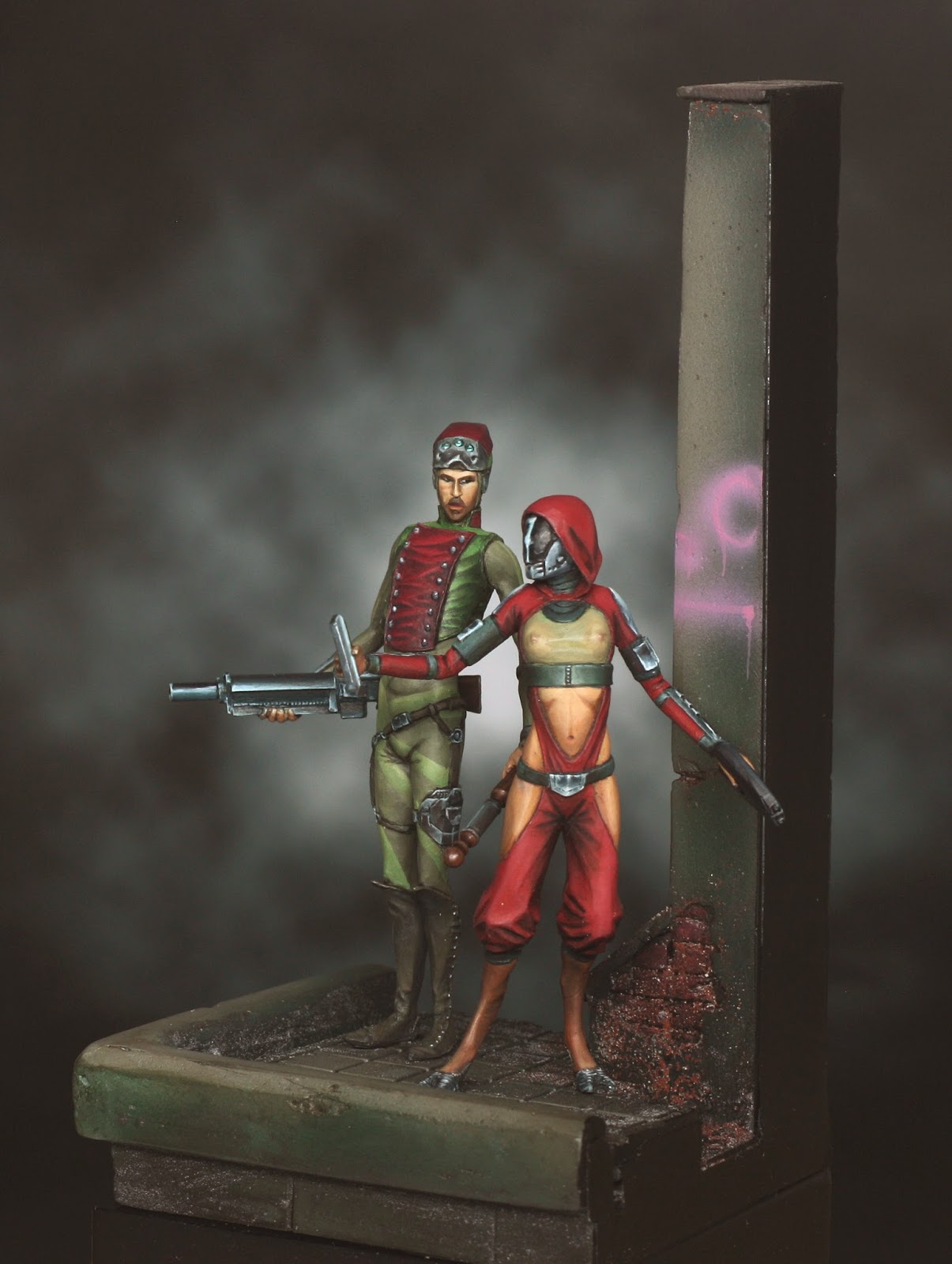 On the whole I am quite pleased with several aspects of this piece and, via the accompanying DVDs, I've tried out a few little tweaks to my technique that I may well using with future pieces.
In particular, I'm pleased that I got an expression into the guy's face that makes him look a little unsure as to what the girl is up to. I'm also pleased with the simple effect of the graffiti. It is only a simple design, but a combination of airbrush and hand brush created a nice realistic look.

I decided to "name" the piece "Yolo ^_^ " as a bit fun. There's no huge message, other than I'd rather paint minis than watch the kind of reality TV that "yolo" pertains to, despite how solitary the hobby may be at times. Perhaps the girl in the scene is watching that kind of TV? Who knows? ^o^

All votes and comments in the galleries are always most welcome, especially the comments. :)

Moving onto the next one, this was done as a bit of a challenge during a conversation on the Kingdom Death kickstarter boards. The challenge was to create a pinup space marine. GW have done Sisters of Battle, which are pretty much female space marines to the uninitiated, for a long time now, but they're not particularly convertible as they're made out of big lumps of metal. Plus, I don't own any in my grey pile that I can recall!
So, instead I set about constructing a model out of a combination of Kingdom Death female parts and GW space marine parts that I still have a few bits of. The result was a piece that I've nicknamed "Lady Grimdark" in homage to the "grim darkness of the far future" that Warhammer 40k is set in.
Colours-wise I wanted something reasonably feminine but not bright pink with flowers, with contrasting details, hence the purple/green scheme. Then the skin was done in my usual style.
I tried to imagine to an extent what Lokman Lam (the artist that does most of the KD pinup concepts) might do, maybe not the colours that he may use, but the posing and atmosphere. The whole piece didn't take too long, and it was a bit of a shock going back to painting the big shoulder pads, shin guards and back packs that are synonymous with space marines. I haven't put together or painted a marine in over 4 years!
Anyway, here she is... 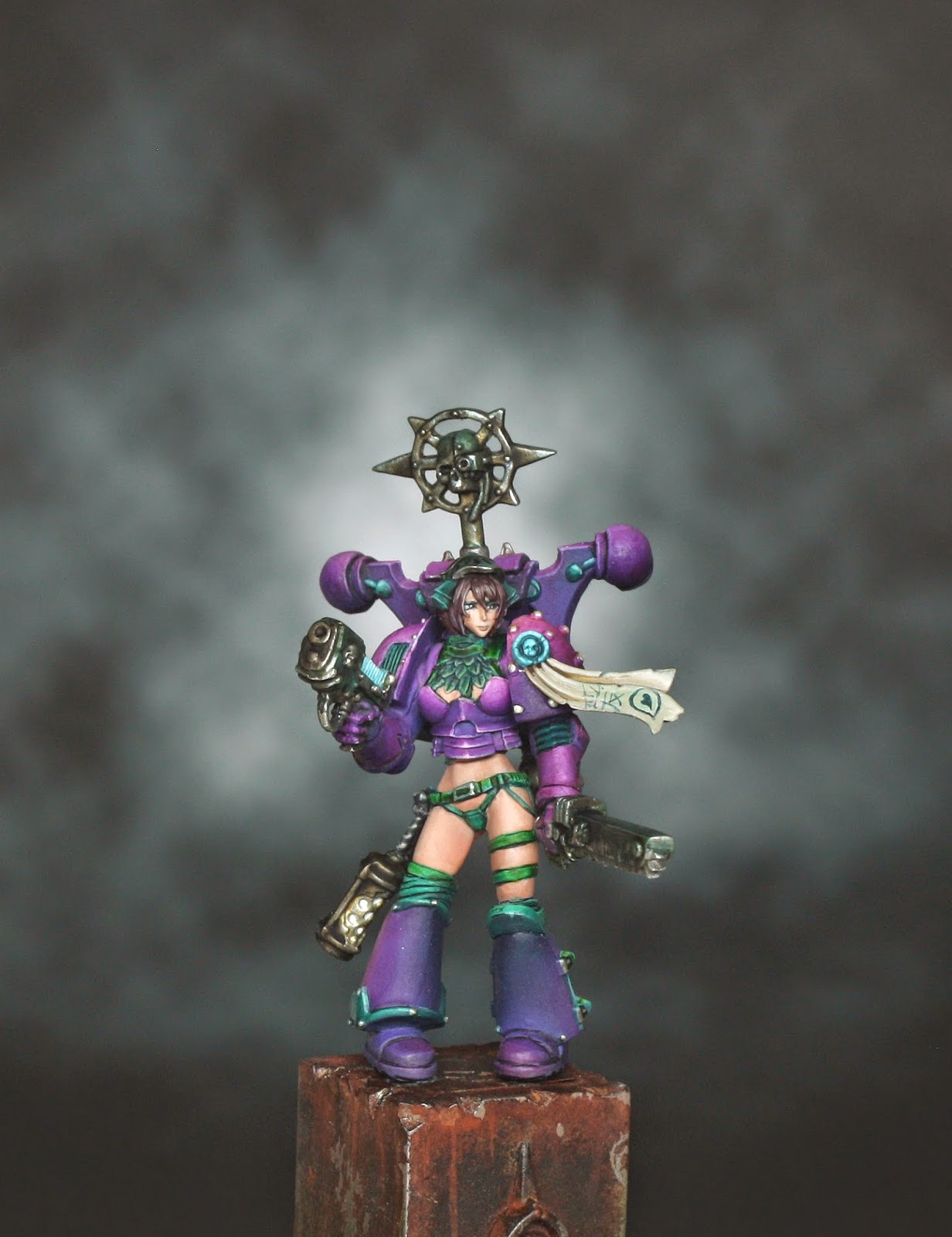 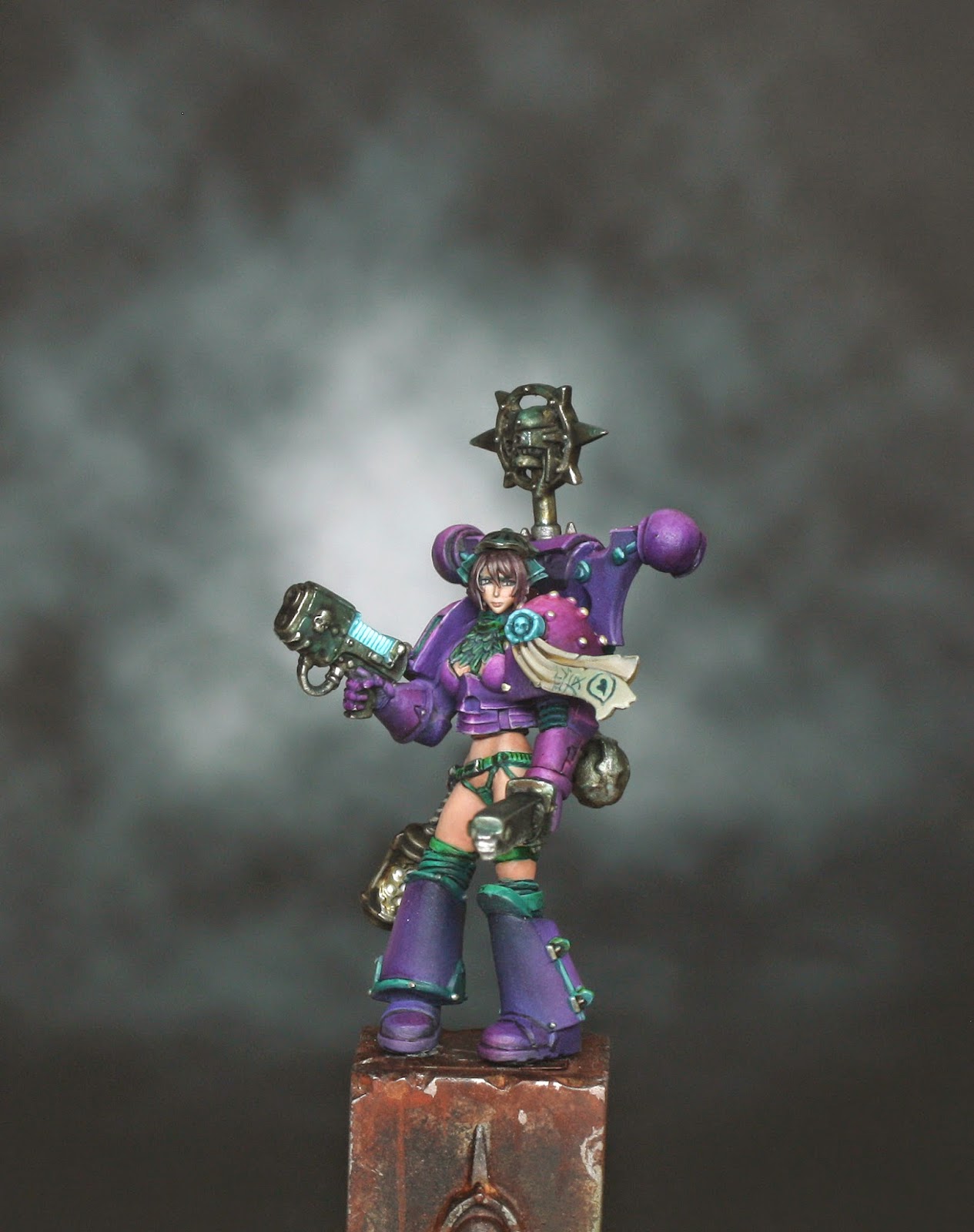 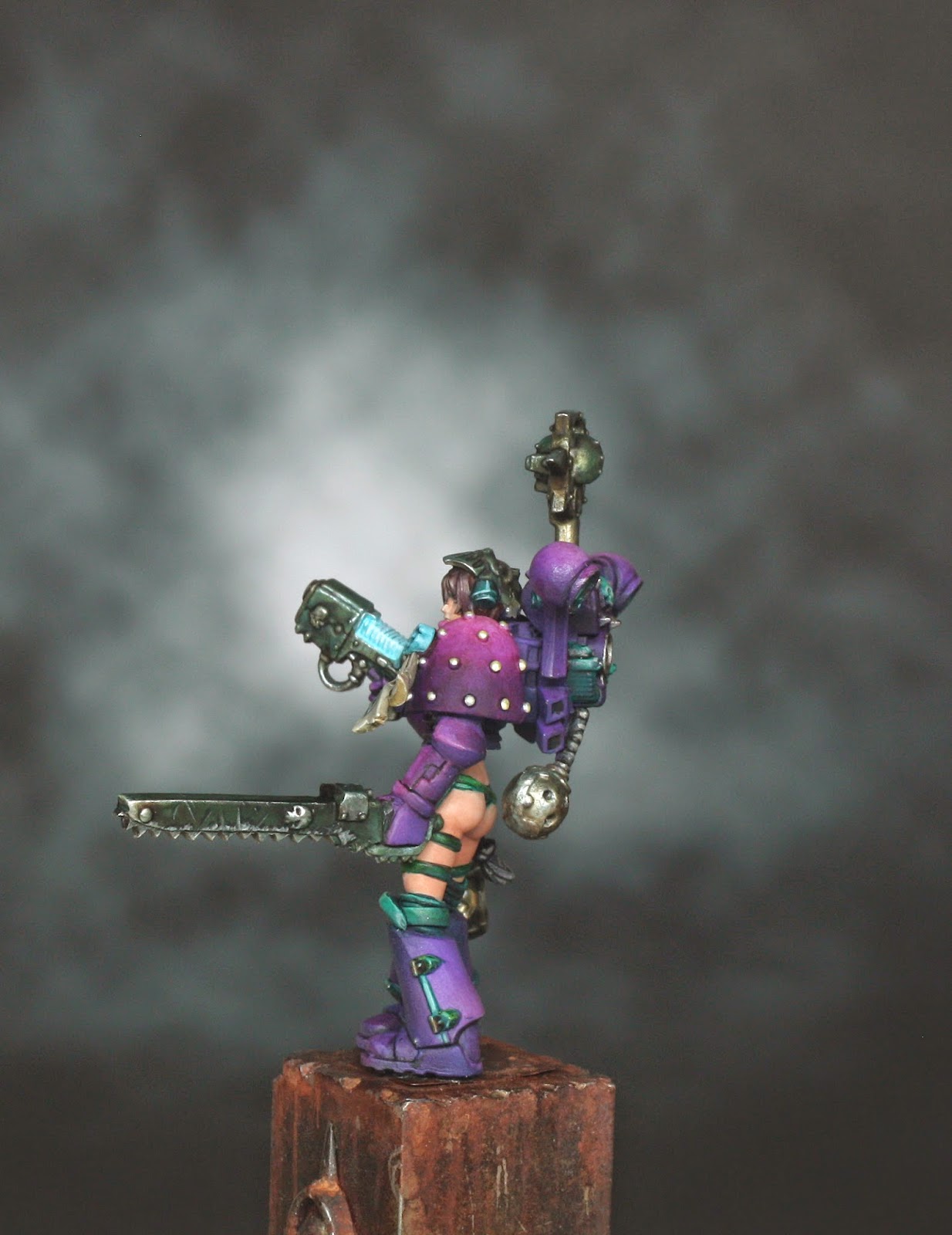 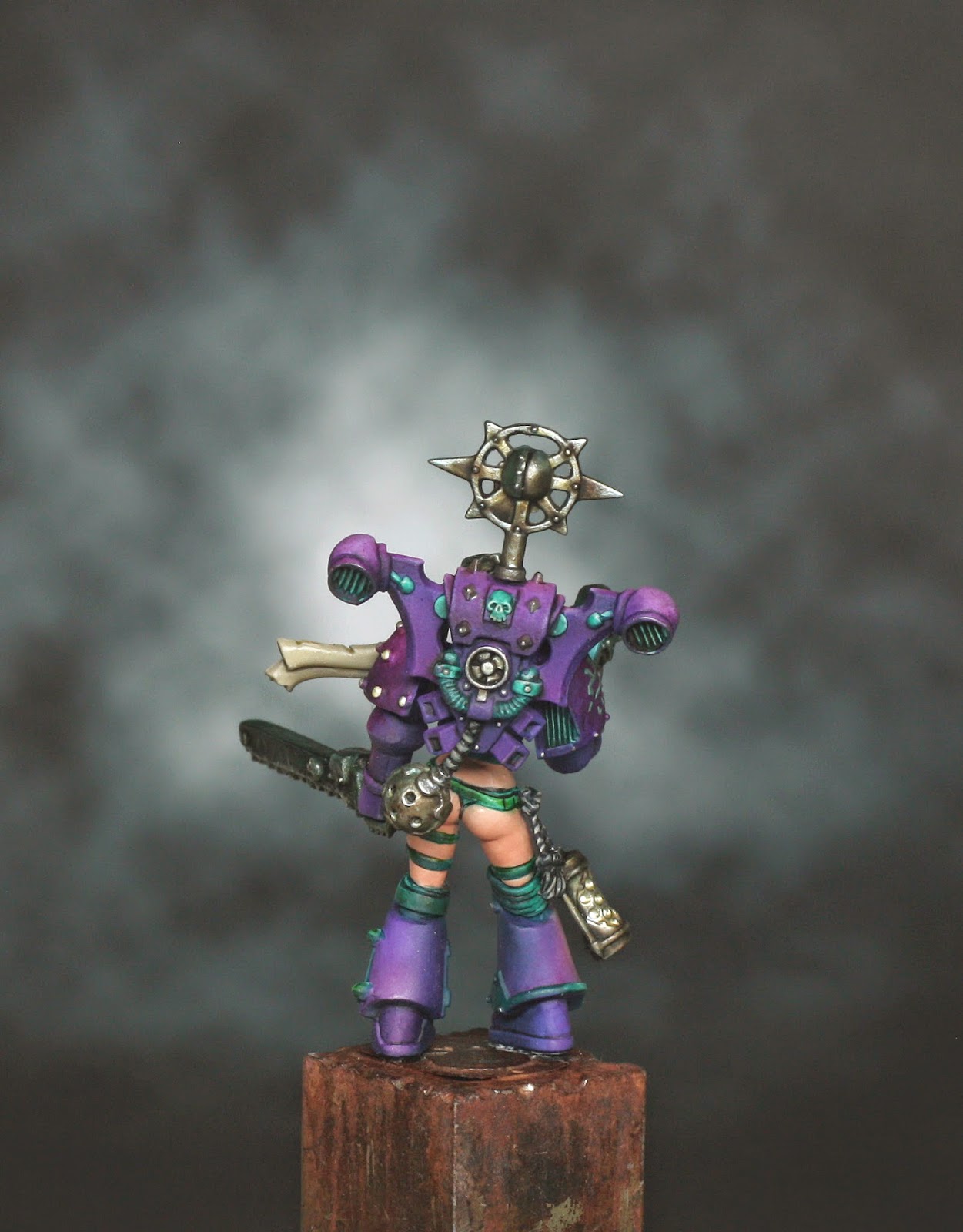 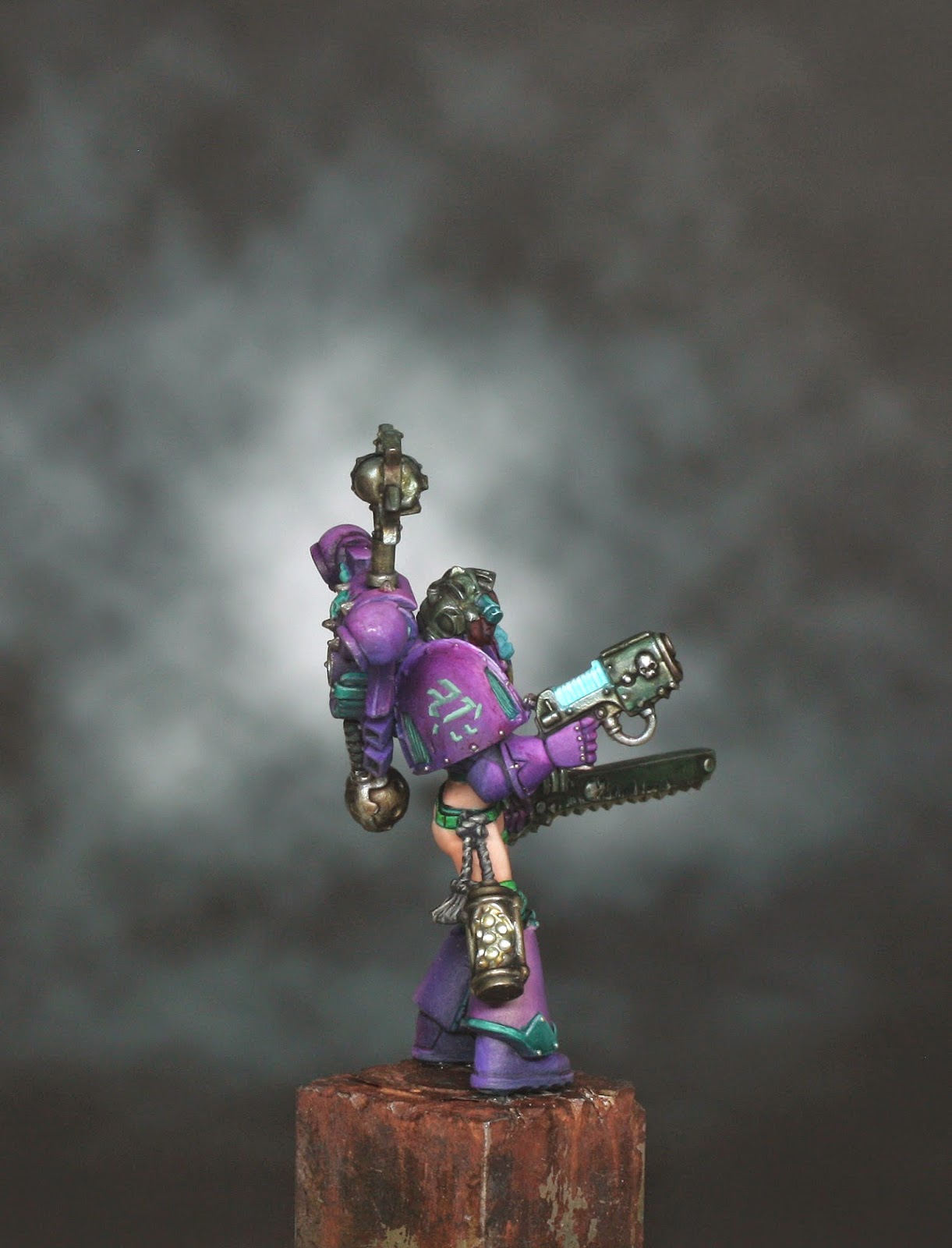 She was quite a lot of fun, but I don't think that I'll be returning to space marines anytime soon! ;)

Third was a super fast piece that I just did because of the clear out. I doubt I spent more than about 3 or 4 hours on him, and was more a case of seeing what I could do with a gaming piece, as a gaming piece. I sort of did it with a view to the horde of KD models that will arrive sometime soon(ish), but also as a little exercise in painting black quickly and to a certain effect with different textures.
I can't even remember what the official name for him is, but he's Zombicide's (not) version of Samuel L Jackson in Pulp Fiction... 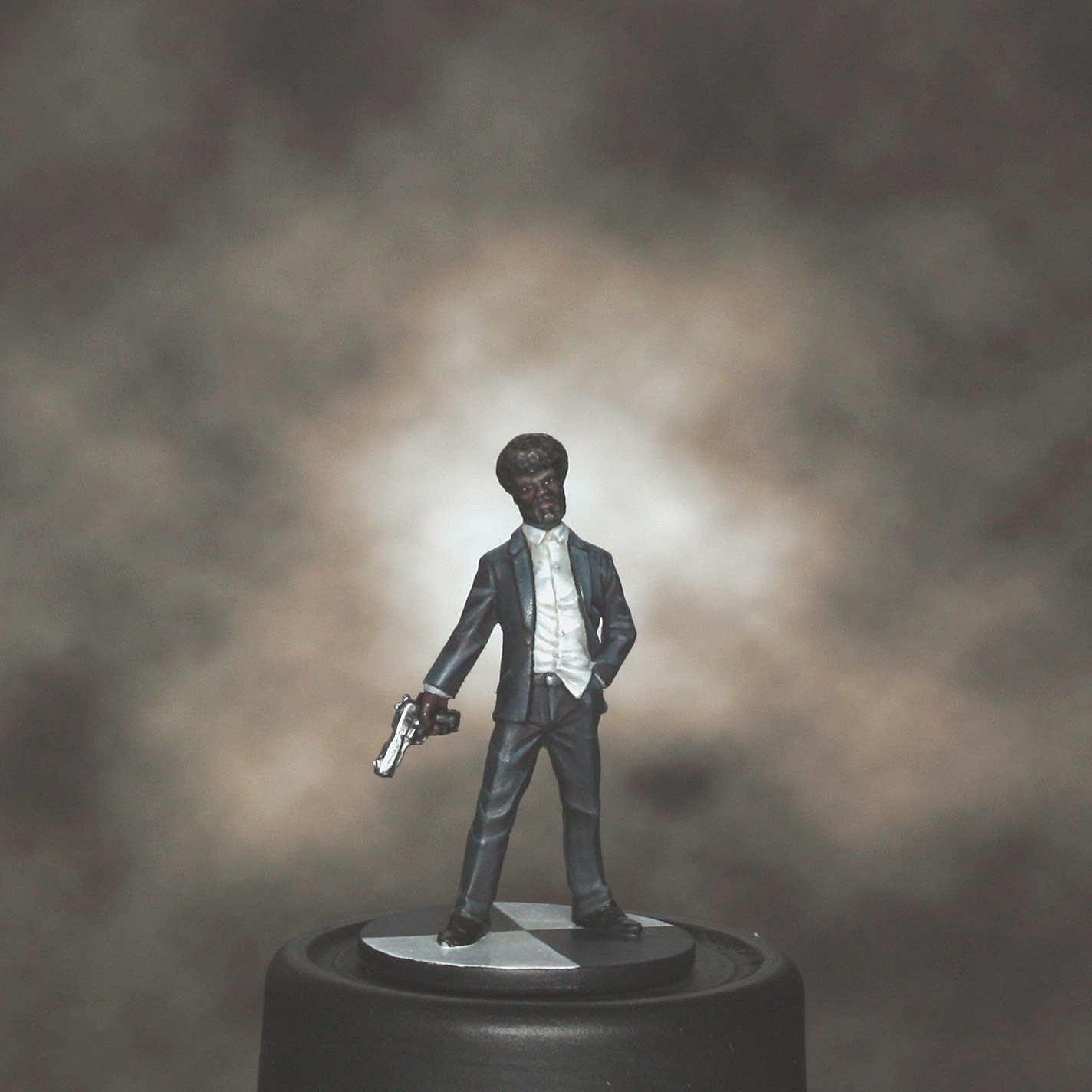 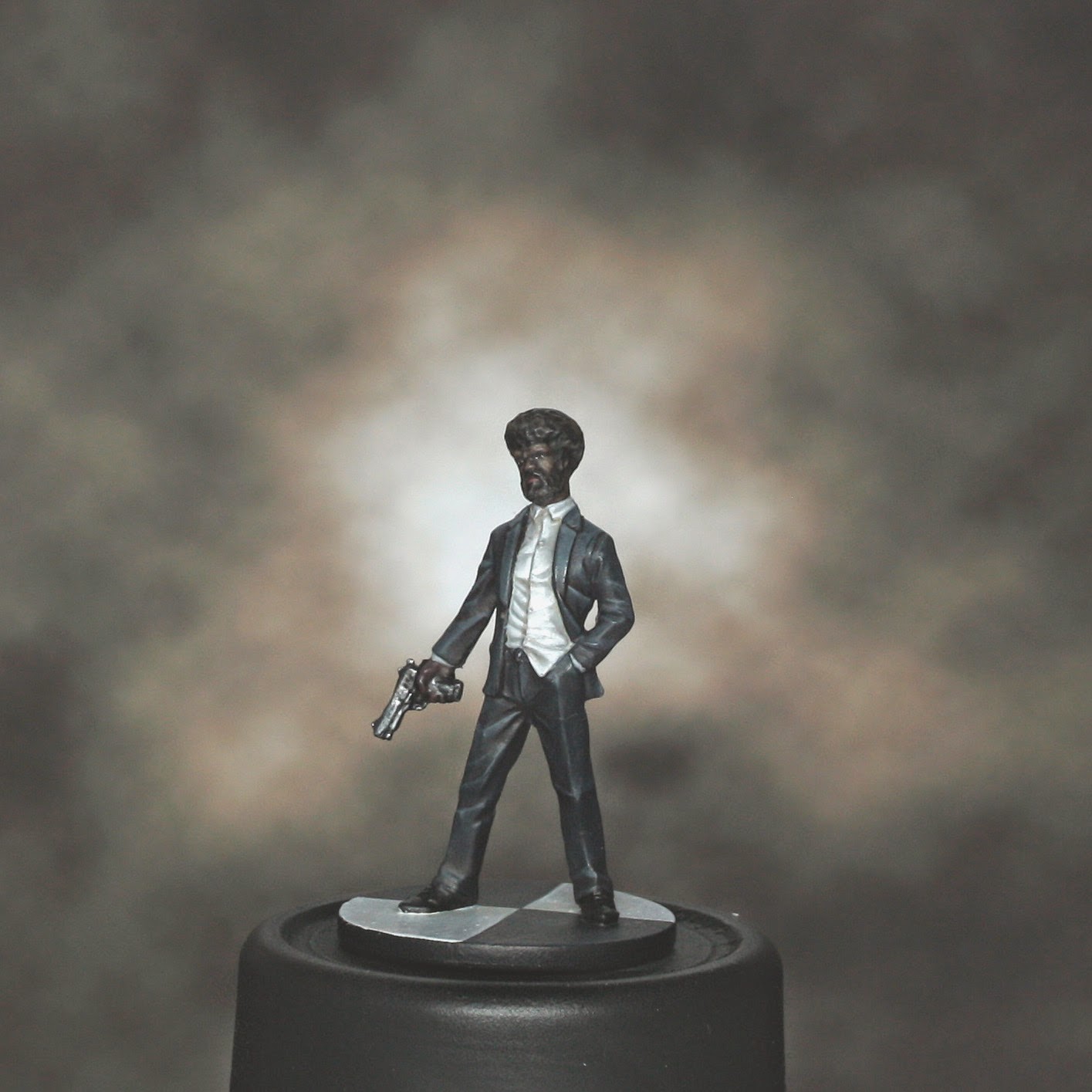 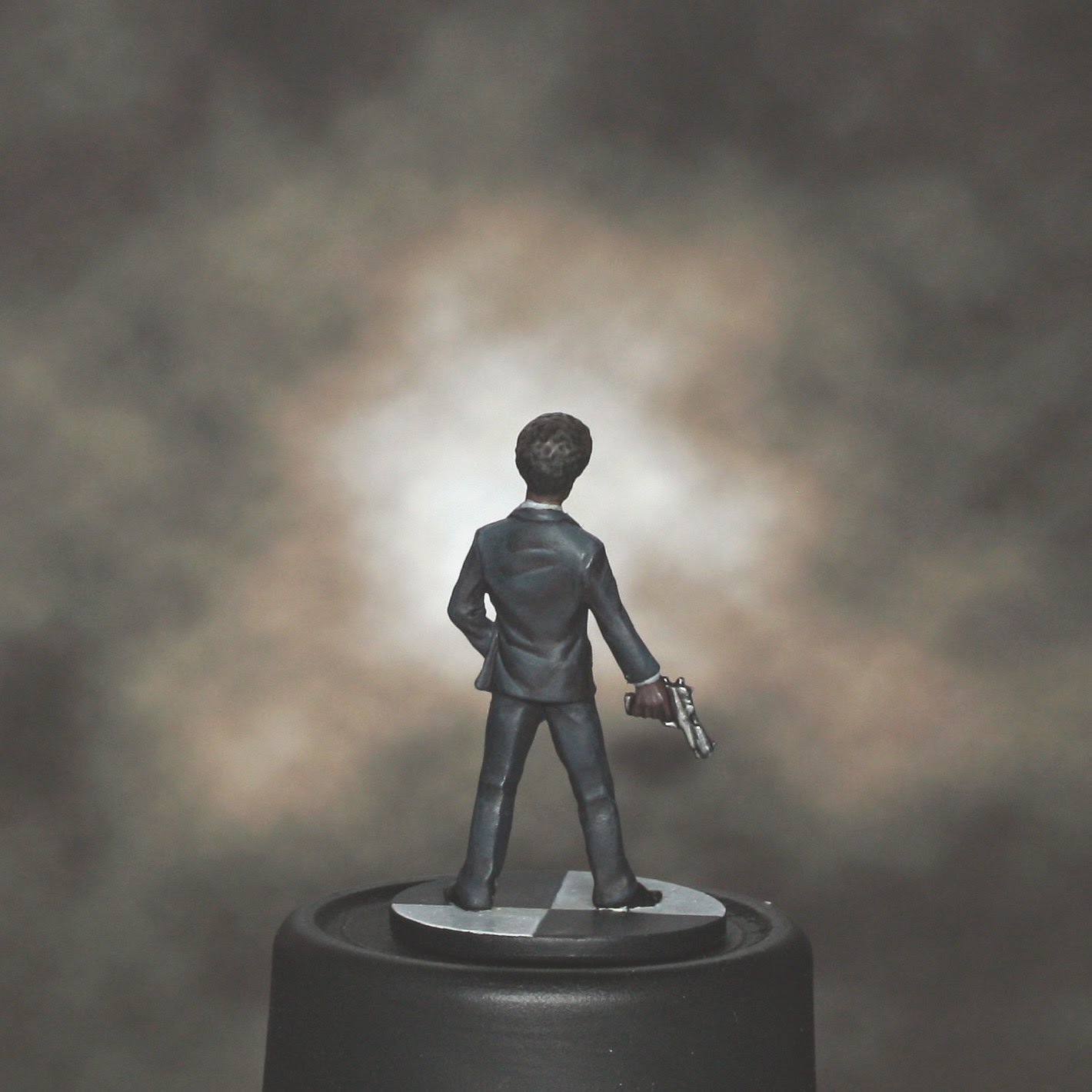 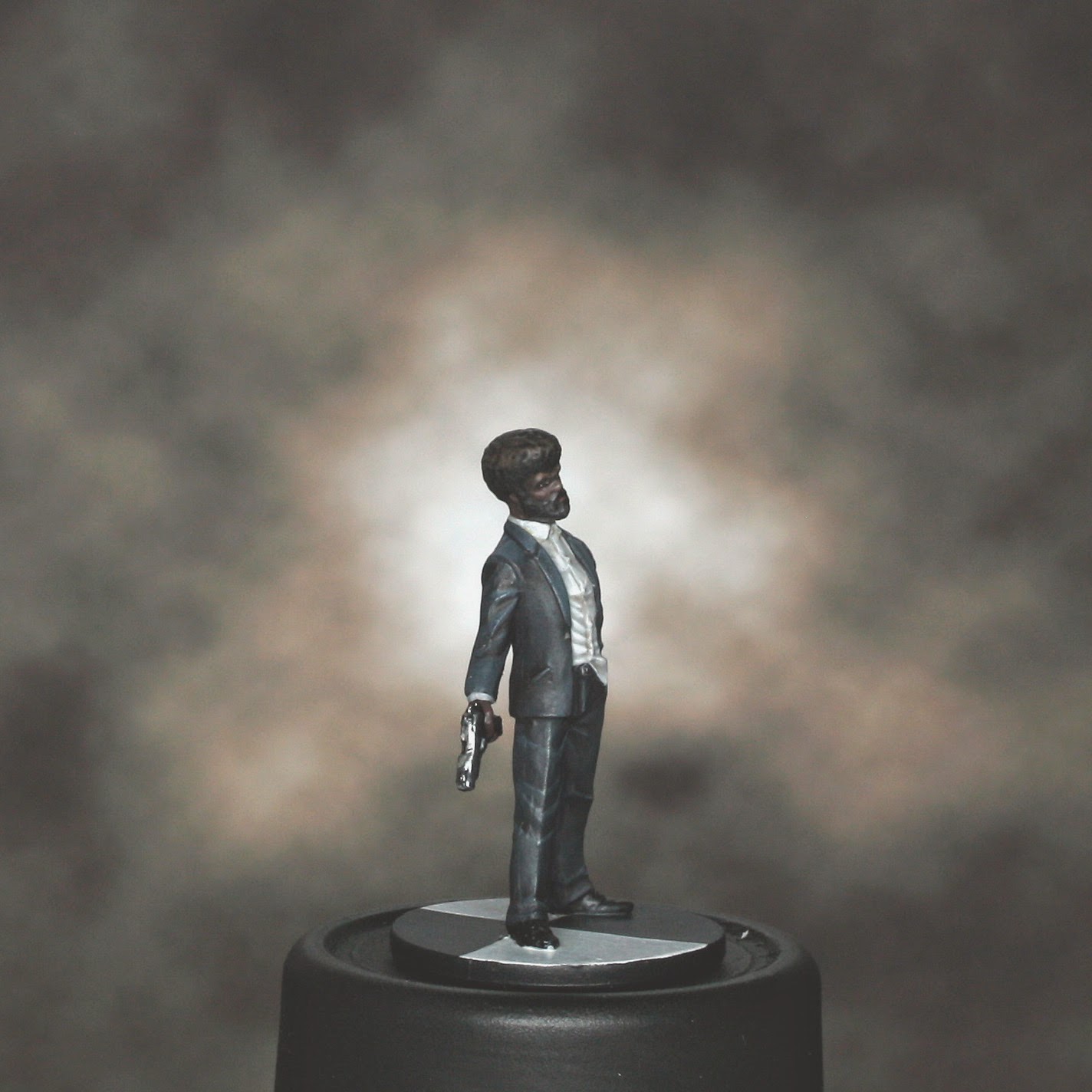 There are obviously a few loose brush strokes (like the tile), but as a limited palette speed paint he is quite effective.

I nearly forgot, but a couple of days after the last blog post my latest Kingdom Death Pinup article was published. The latest girl was the Survivor Pinup, and she was great fun to do just like the others.

And here are some pics... 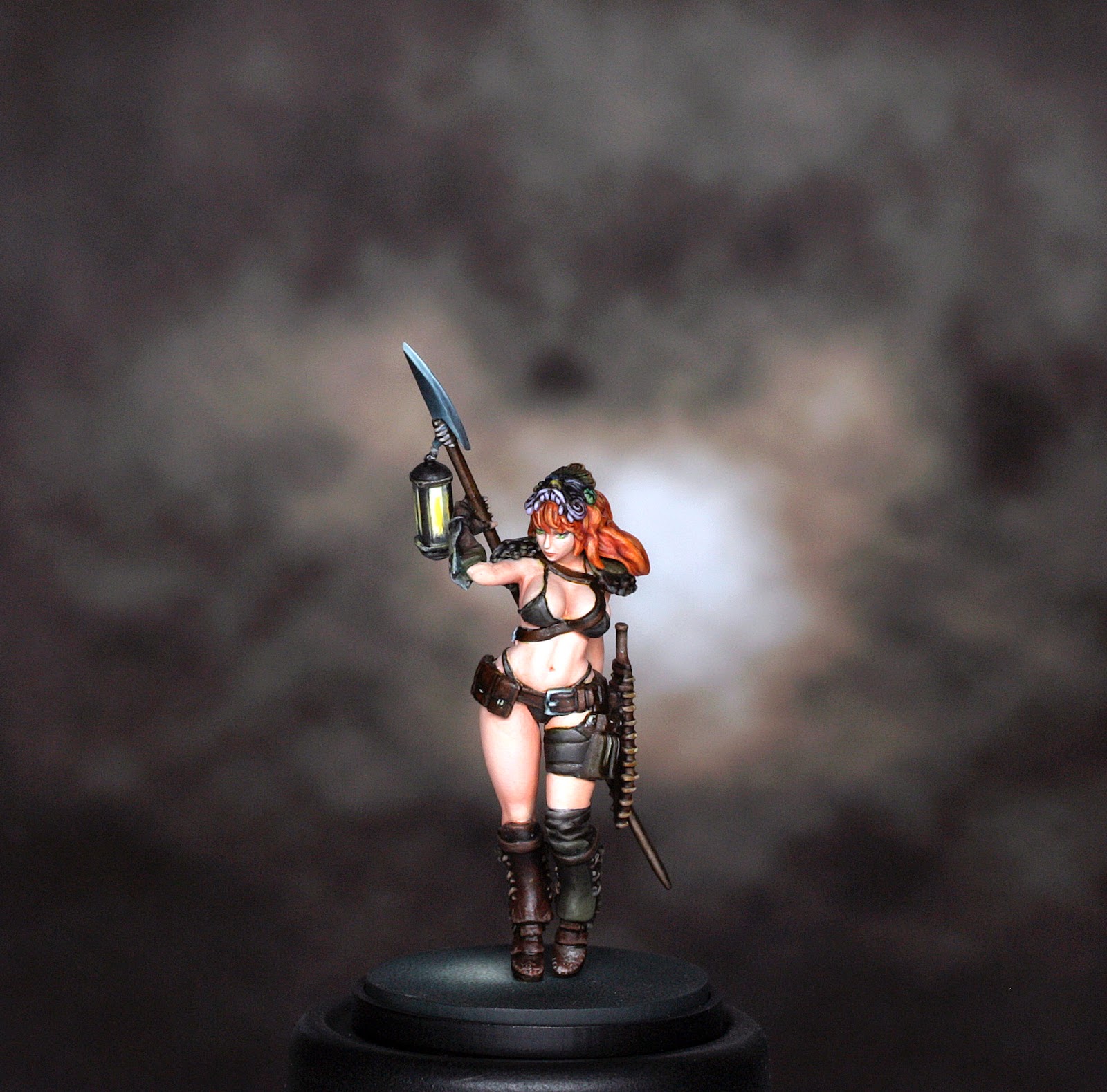 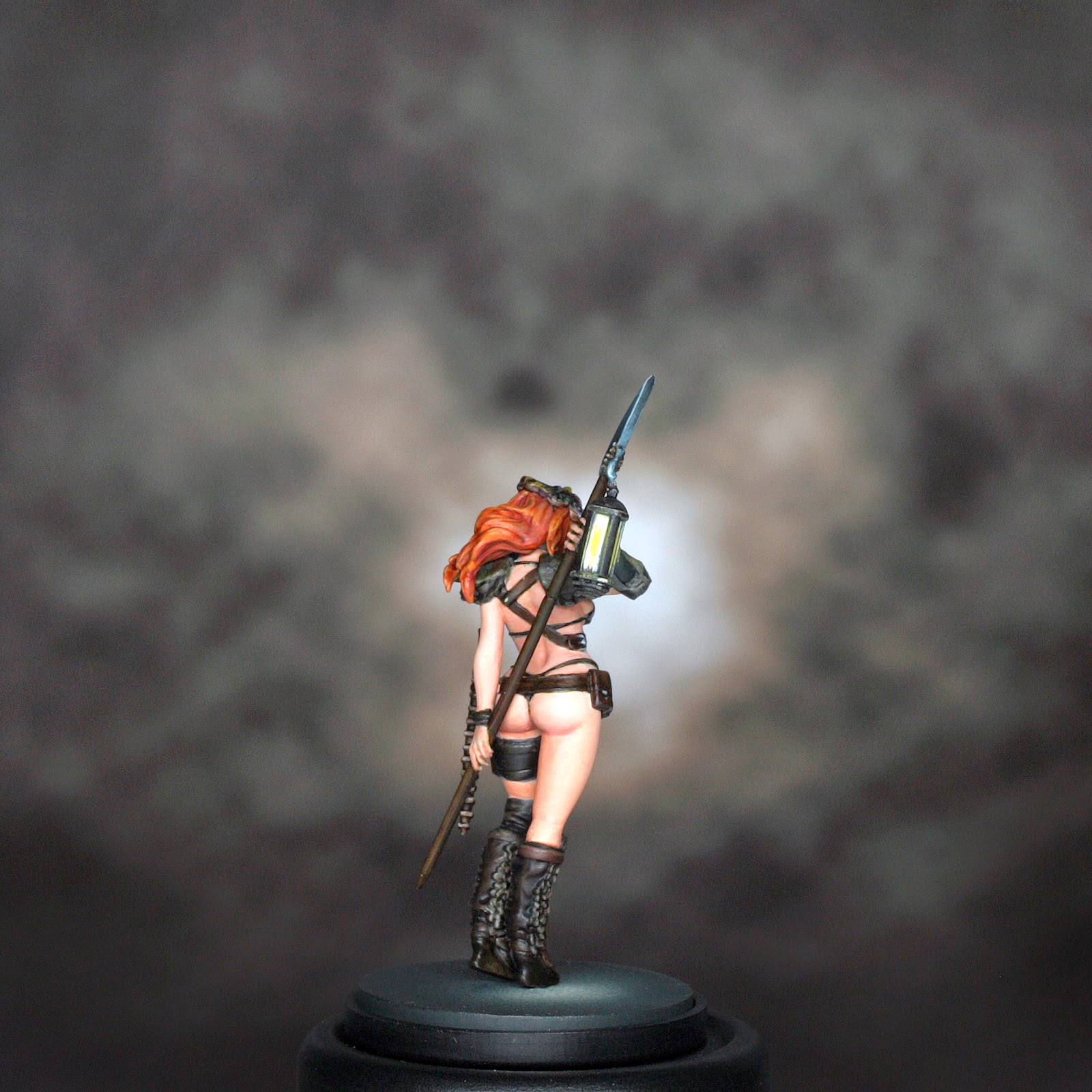 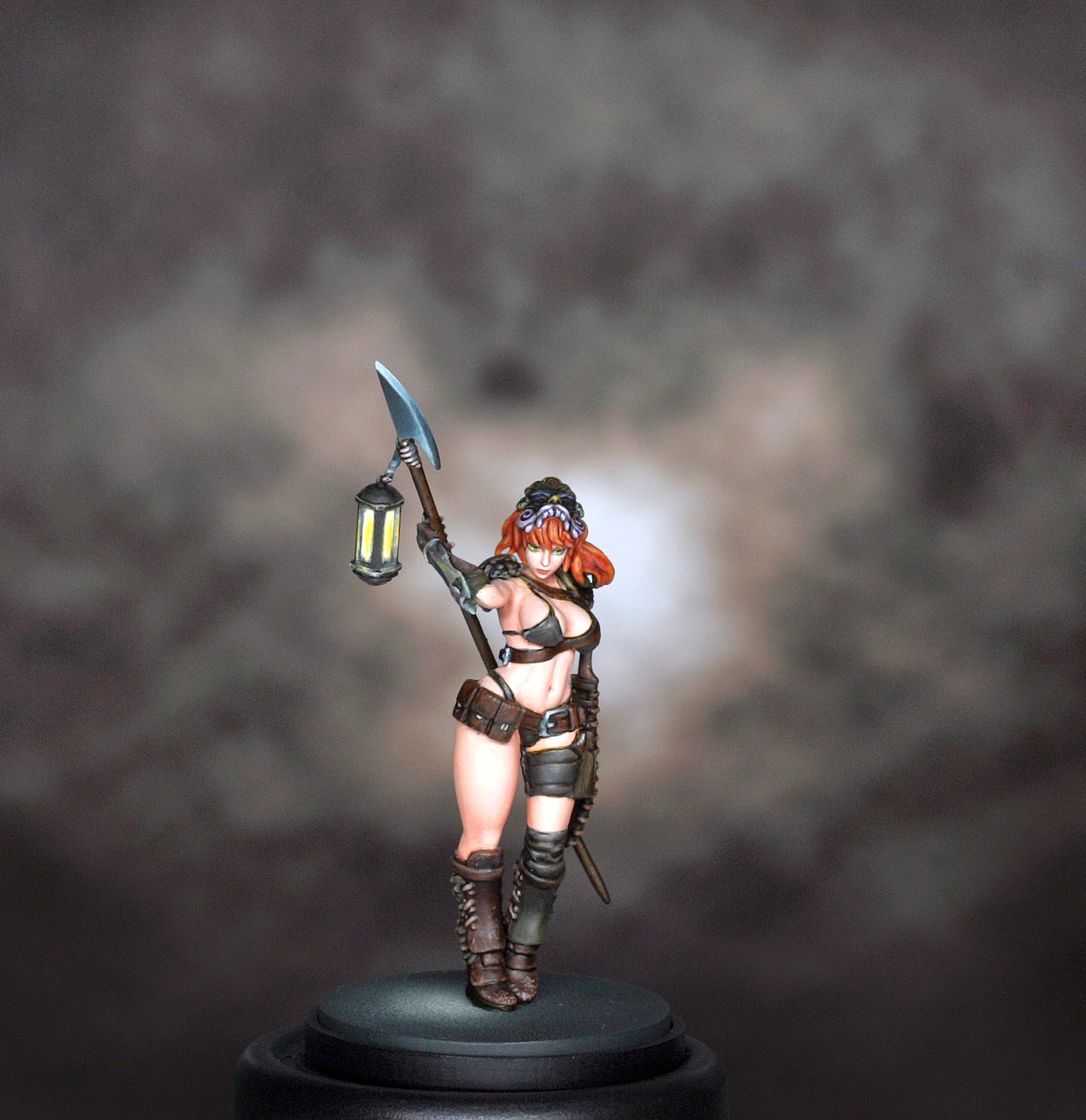 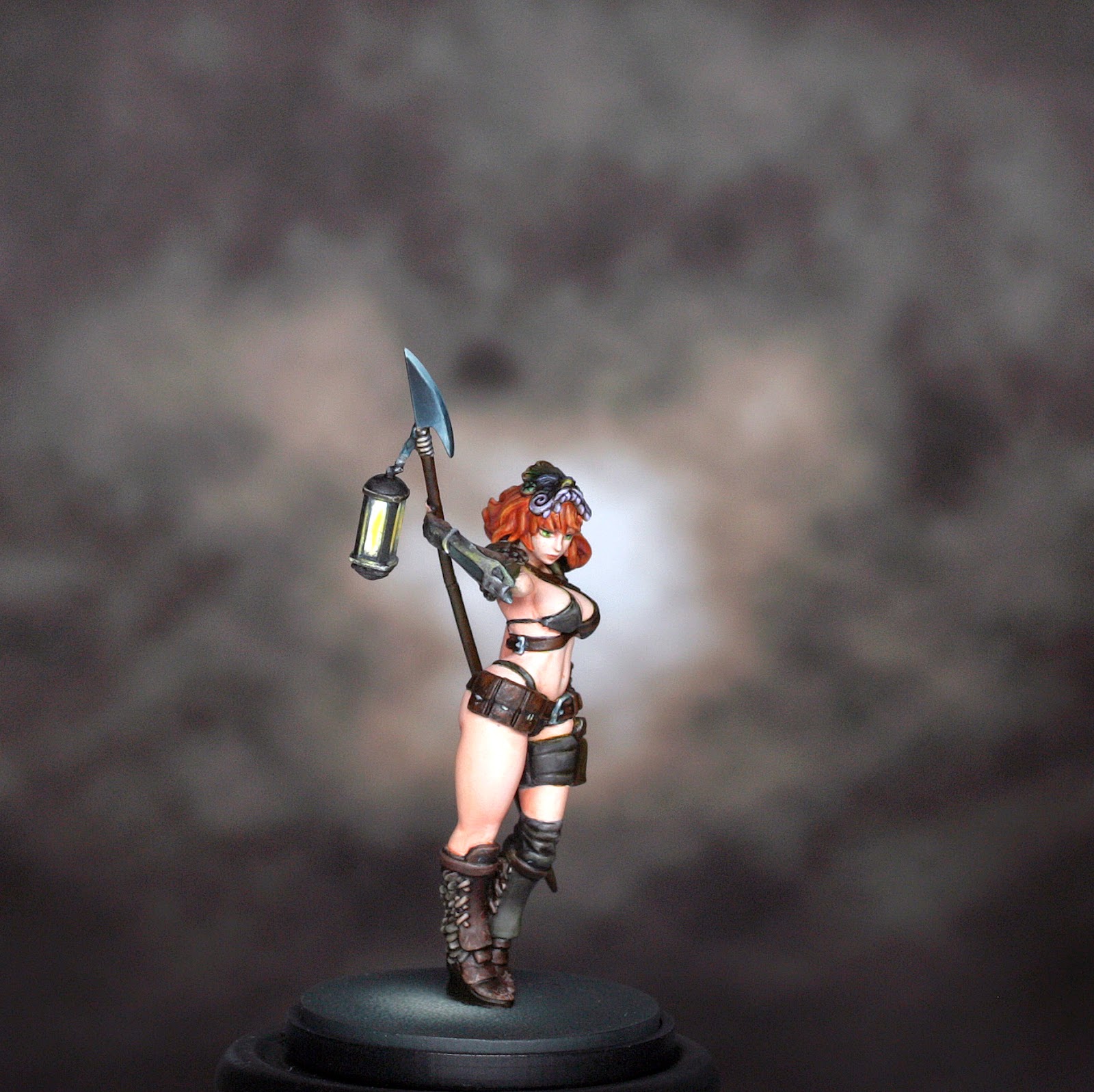 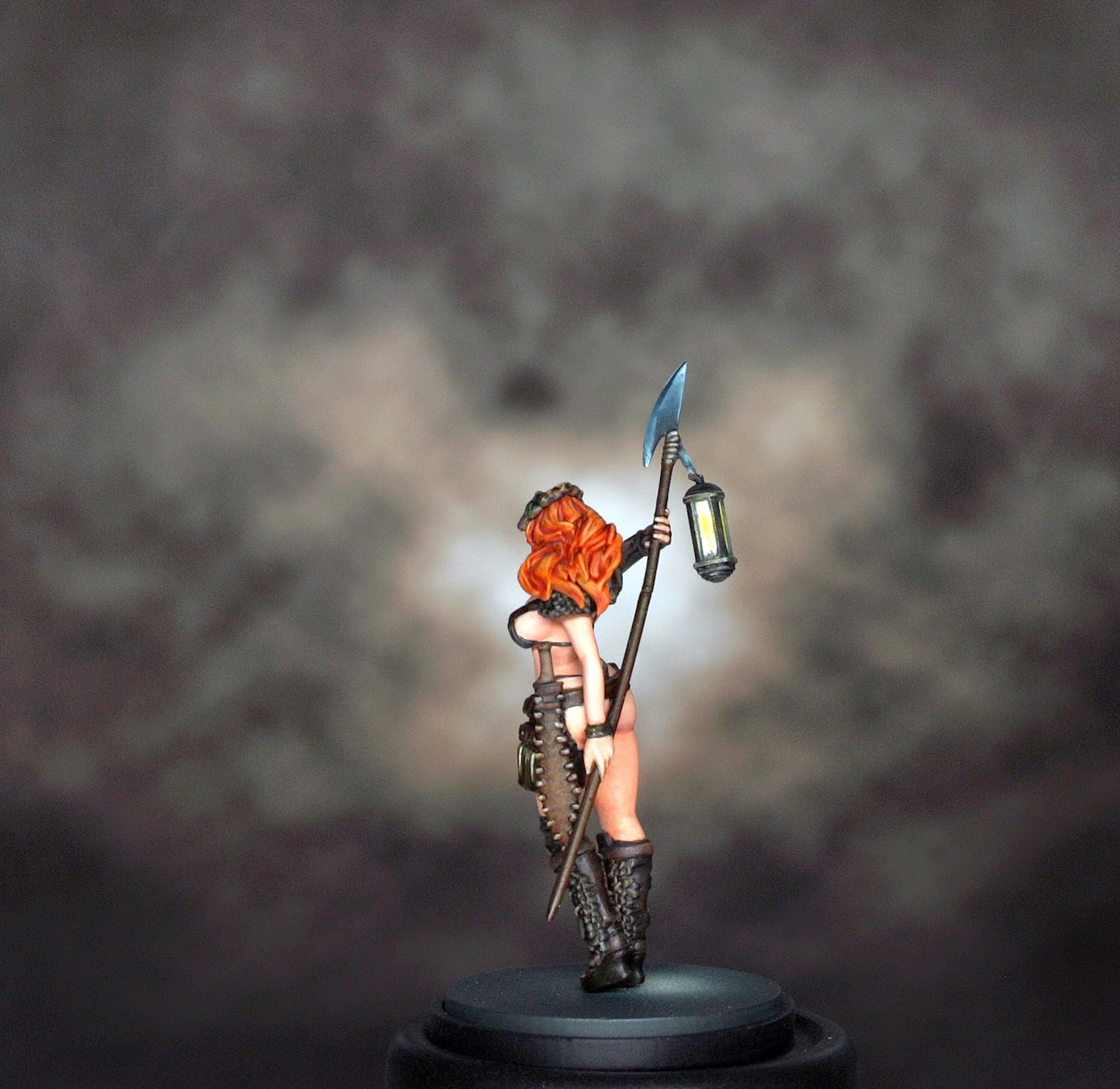 Once again, you can find her in my galleries - COOLMINI LINK and PUTTY & PAINT LINK

If you do happen to be a Putty and Paint member that is reading this, I would particularly appreciate it if you would stop by a drop a vote on the pieces in this update, as getting 10 votes to qualify for a "score" on the site can sometimes be really hard to come by, and I currently have 3 or 4 pieces which are 1 or 2 votes short of the magic "10", including this piece - LINK - that I posted on there several months ago... 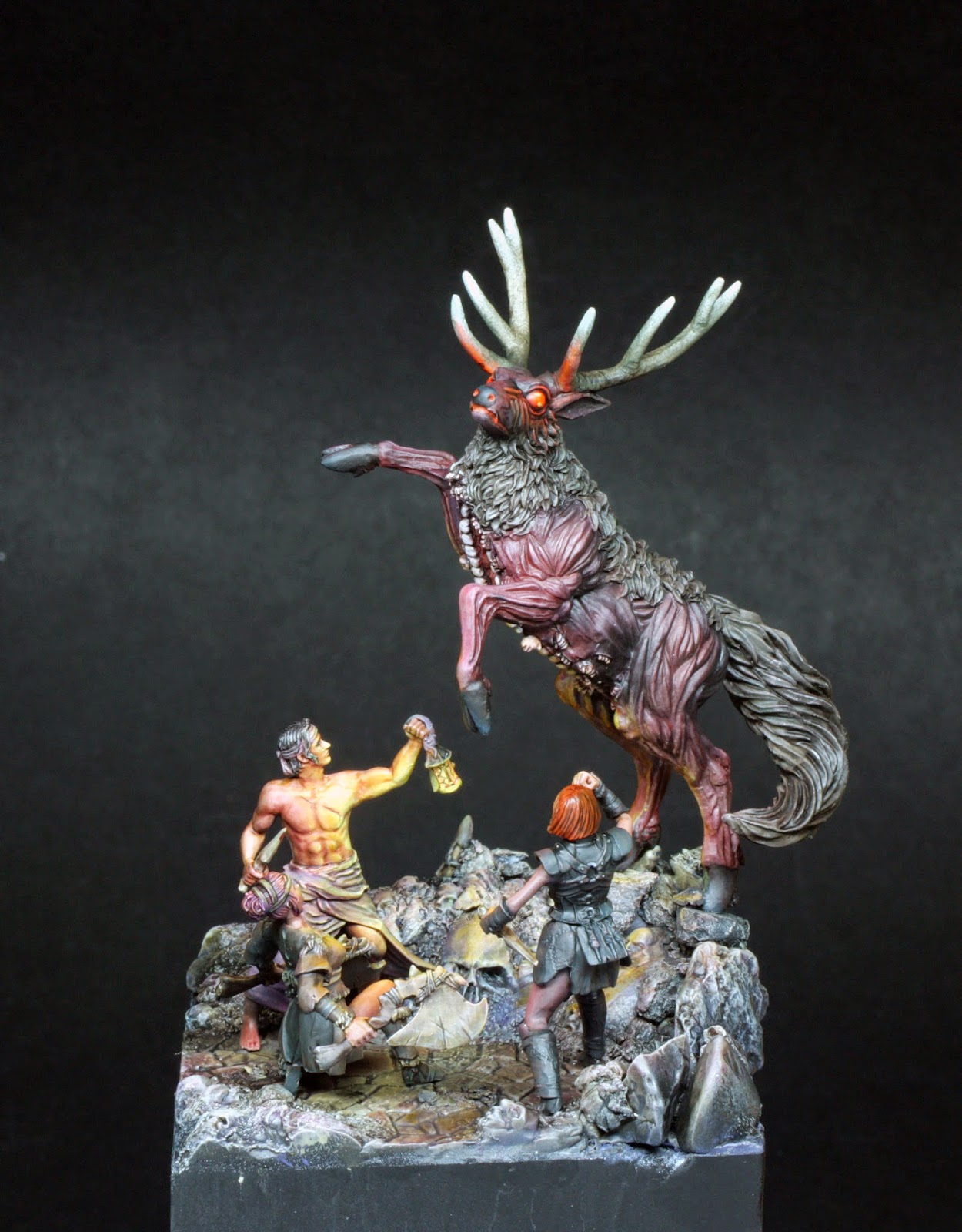 OK, well this has turned into a rather bumper sized edition. So, what am I doing now? Well, I have one last old piece on the desk (strictly speaking I have a second one, but that may never get finished!), and that is  the Kingdom Death Lioness which is as yet unreleased (from the Kickstarter), but I got her at the same time as the Phoenix Dancer, as an early casting. She has been primed and had some skin tone airbrushed on for months, so I will definitely get her done now.

The only other piece that I have on the desk is a big one that I assembled and primed last night, and that is the Knight Models sculpt of Gandalf the Grey. He is essentially a big textured cloak with a head on the top, so I doubt that he will take all that long to paint, but that said, I want to try out some texturing and a bit of lighting, plus of course, the face is a good likeness of Ian McKellen, so I would like to at least try and get that fairly recognisable.

So, that should be what to expect in the next update. I hope that you stuck with it to the end of this giant wall of text and pictures. Enjoy the article and please do stop by the galleries.