Someone doesn't like me apparently.
I know, I know. Where's the surprise there then? lol
Well, something happened to me (on line) this week that I have seen or heard happen to some others before, and it did cause a bit of a raised eyebrow.

I was going to write a bit of a diatribe about the practice of score sniping on Coolminiornot, but I think that it will only do a couple of things:
a) Rehash a debate about the imperfections of the voting system of the site's gallery feature.
b) Give credence to the particular individual who took an hour out of their day over the weekend to torpedo my mini anonymously.

I must insist that I love Coolmini as a resource and gallery, and have been a member there since 2007. I have met and got to know a great many of my hobby friends directly or indirectly via the site, and have the greatest respect for the guys that run it. The site isn't perfect, and it would appear that there are a few trolls around, but I think that it is as good as it can be to serve the purposes that it does.

Instead, I am going to shrug my shoulders, safe in the knowledge that much better painters and sculptors than I have had the same or much worse happen to them. Most of them are still around to tell the tale and/or impart the benefits of their wisdom too, so it can hardly be the end of the world.
The score isn't important (the comments are though! :) ), just like winning at events isn't important in the grand scheme of things. It is good to do the best that you can and have people recognise that - similarly it is just as good to do the best that you can at any given moment and then be told how you might improve next time when amongst your peers and friends - but it definitely isn't the be-all-and-end-all.

What is important is to enjoy your hobby and do it for that enjoyment first and foremost. Be it for the sense of achievement when a piece is finished, be it that it gives you the chance to socialise with like minded folks, be it just that lovely centred feeling that you can get when it is just you with some music, a paintbrush, a model and some paint. Whatever it is that makes you head off to your cave to tinker with toy soldiers for a few hours, make sure it is because you want to do it.

Anyway. Not so cryptic intro dealt with, I'll get on with today's post...

First, the Architect commission piece and article both seem to have been well received.
The Coolmini entry (HERE) is featured in their best of the week page - LINKY - and, at last count, the painting guide has had nearly 7500 hits (HERE). All in all I'm pleased, and I have lots of exciting (for me) Kingdom Death stuff in the pipeline that I am trying to squeeze in around the commission that I'm working on at the moment.

A piece that I've been meaning to get around to taking final photos of is the Soda Pop vignette that I finished before Salute last month, and I did take some shots at the weekend which are below. 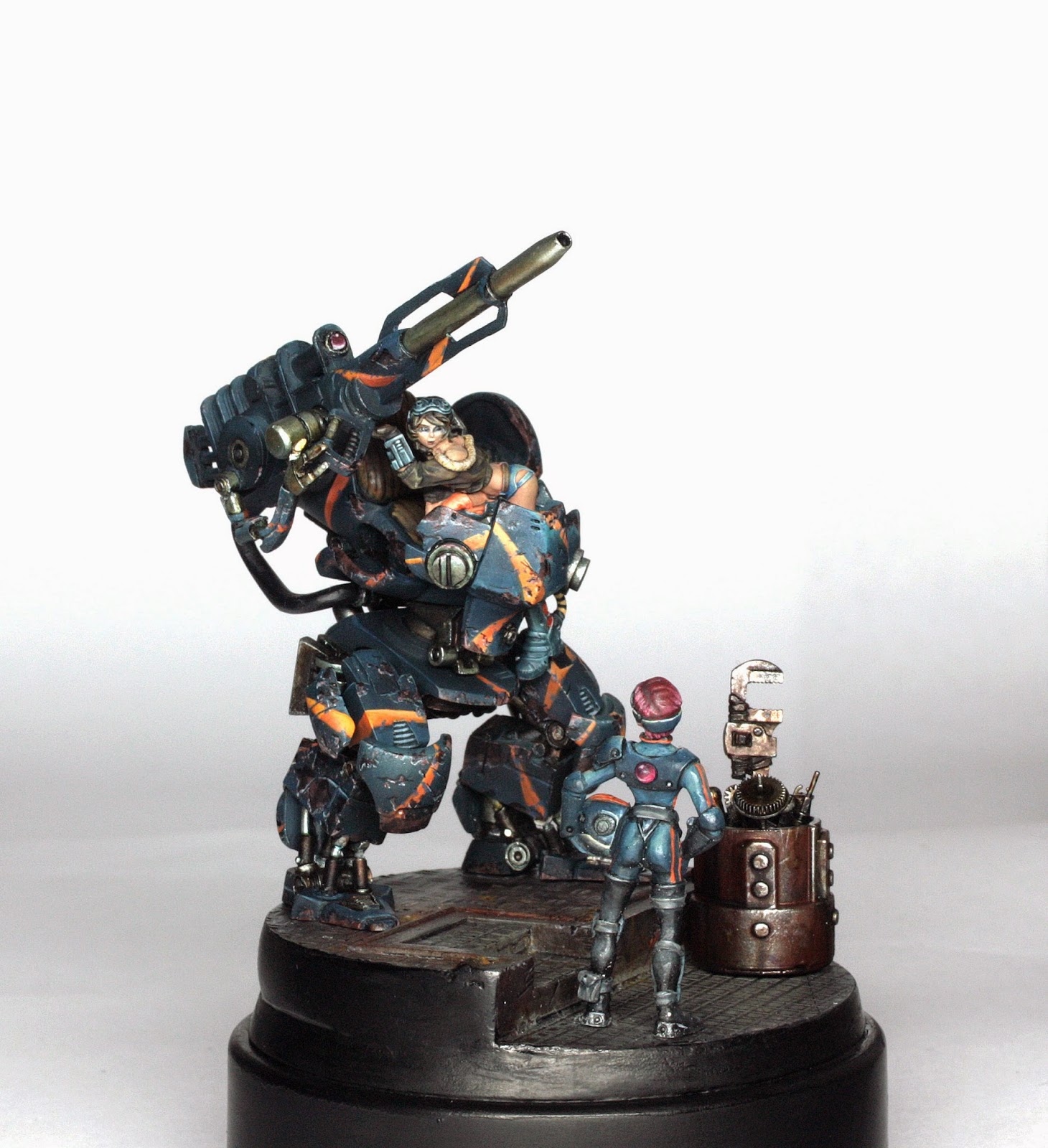 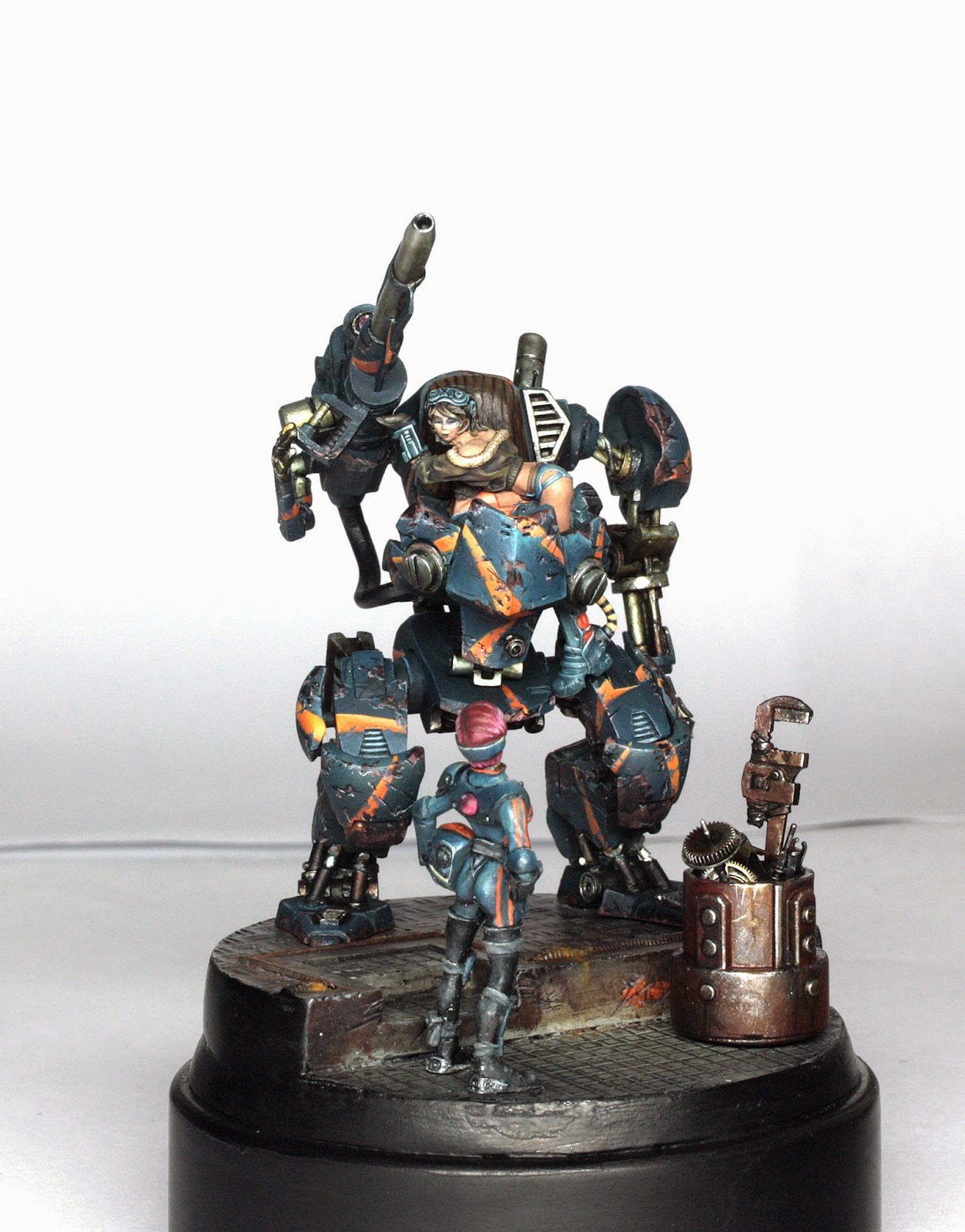 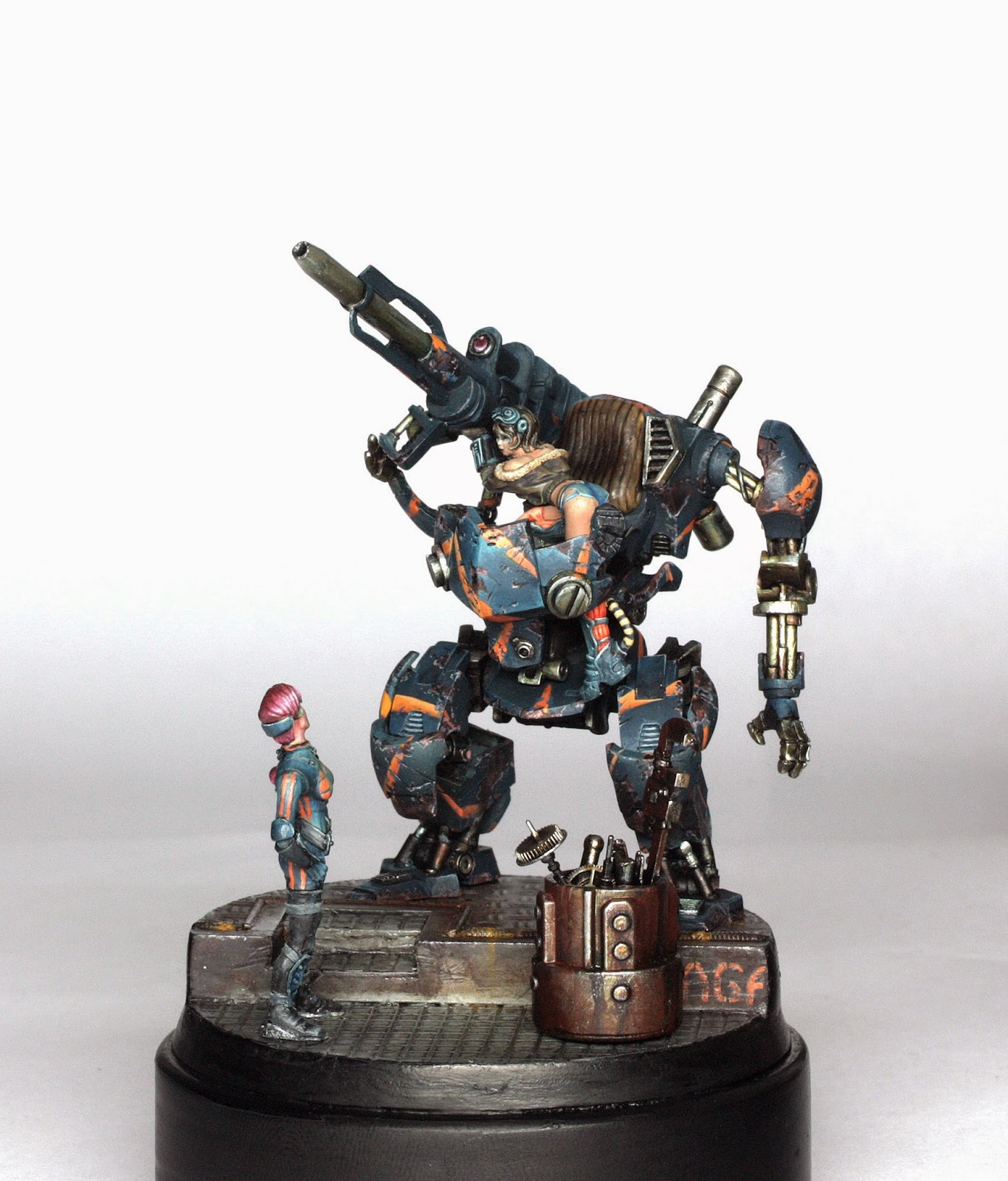 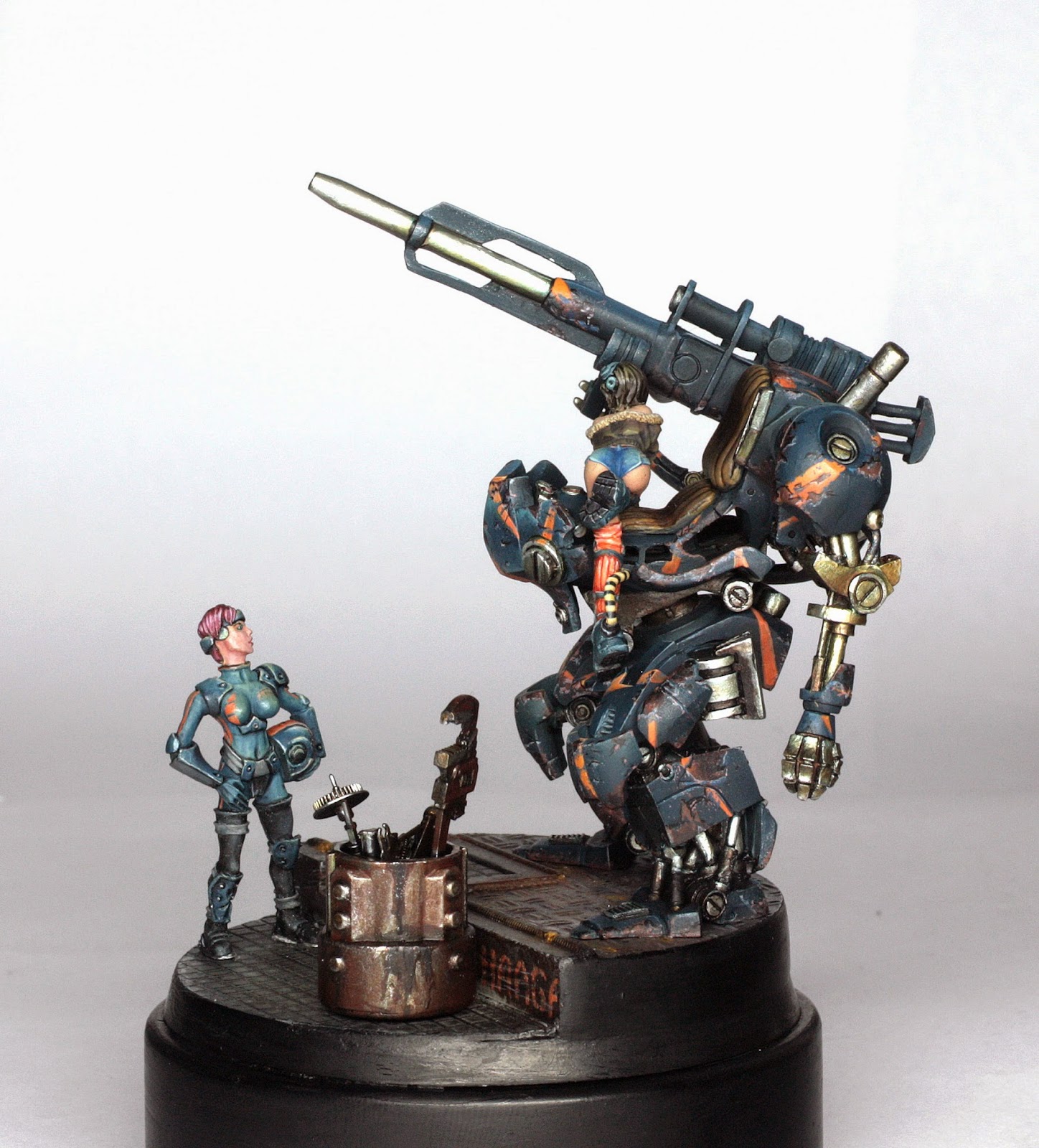 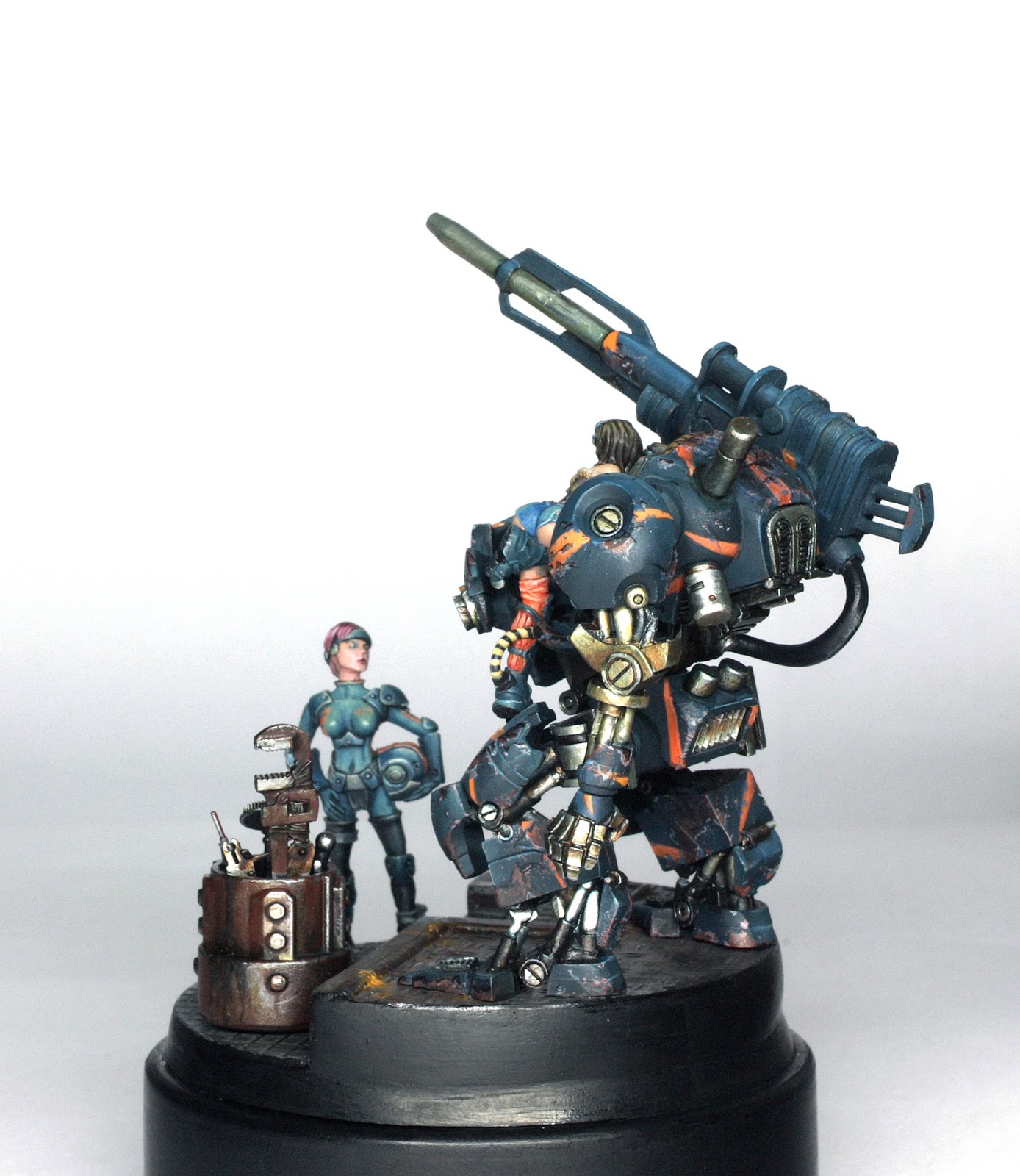 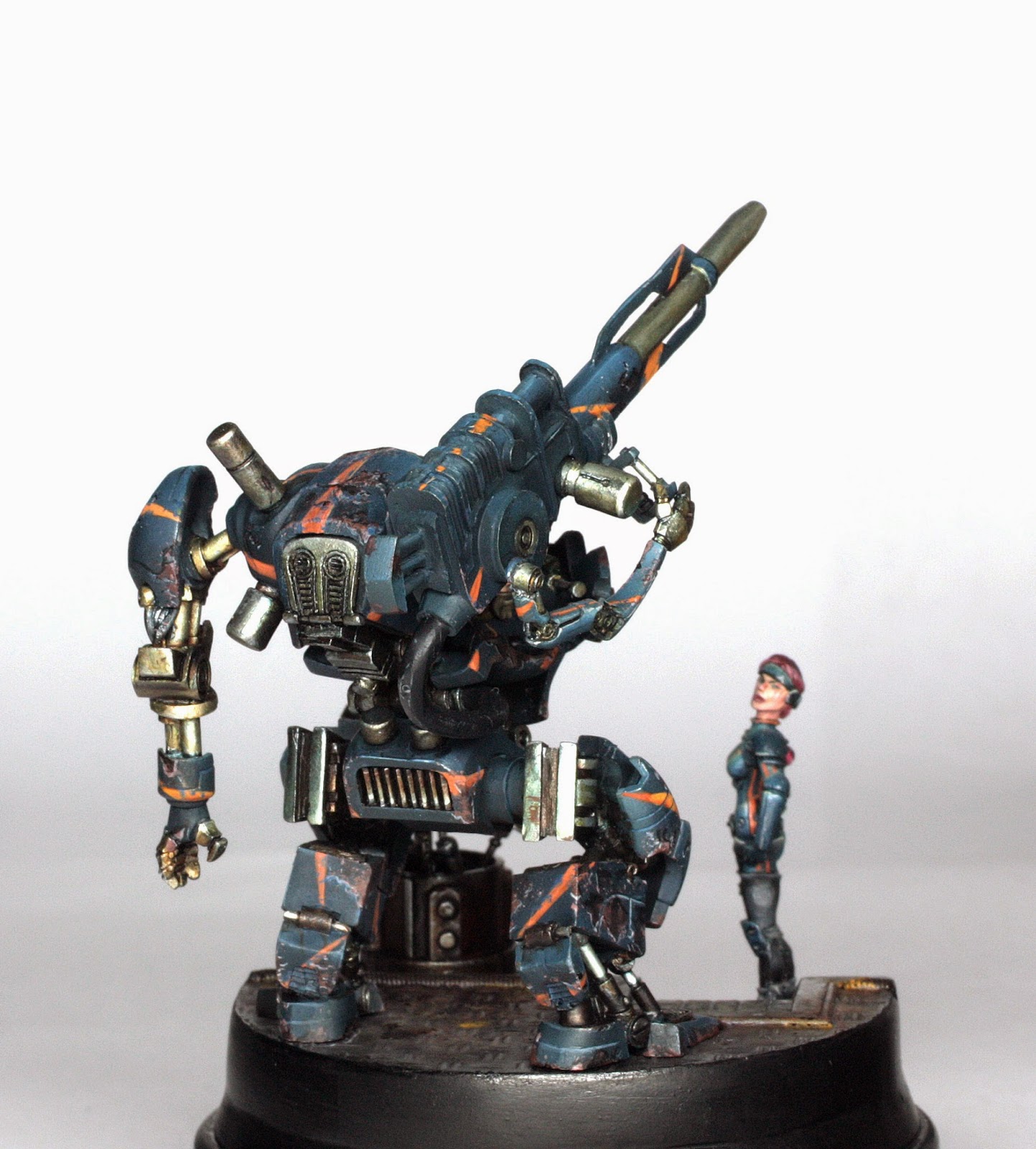 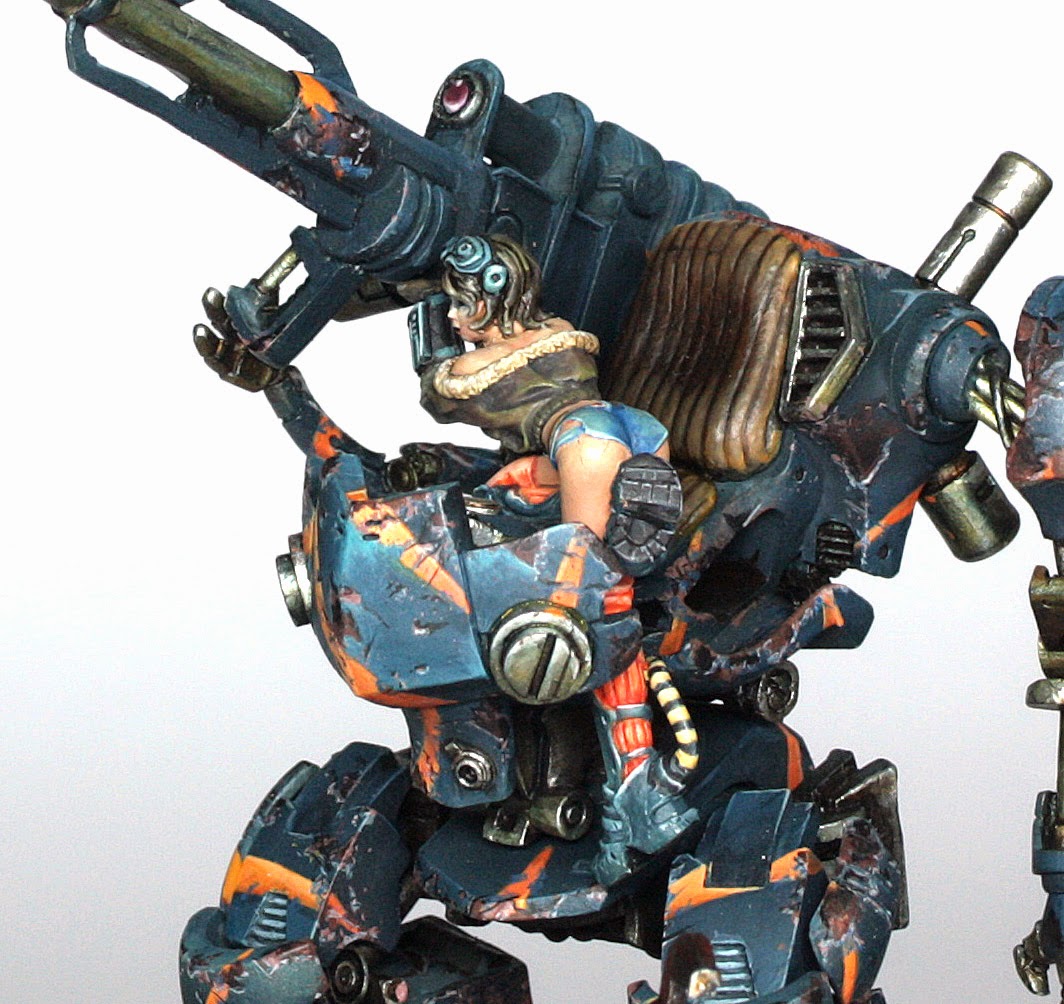 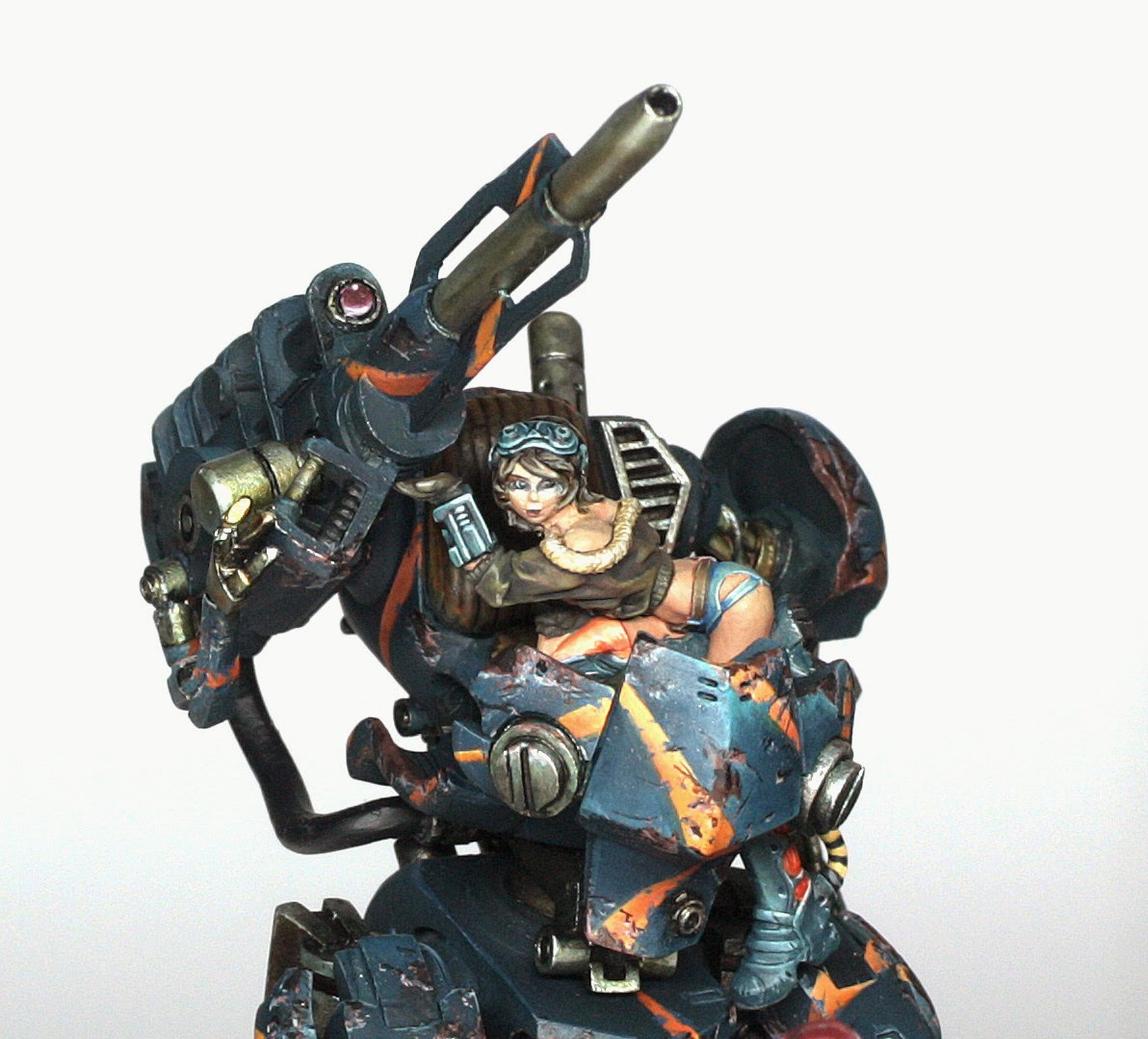 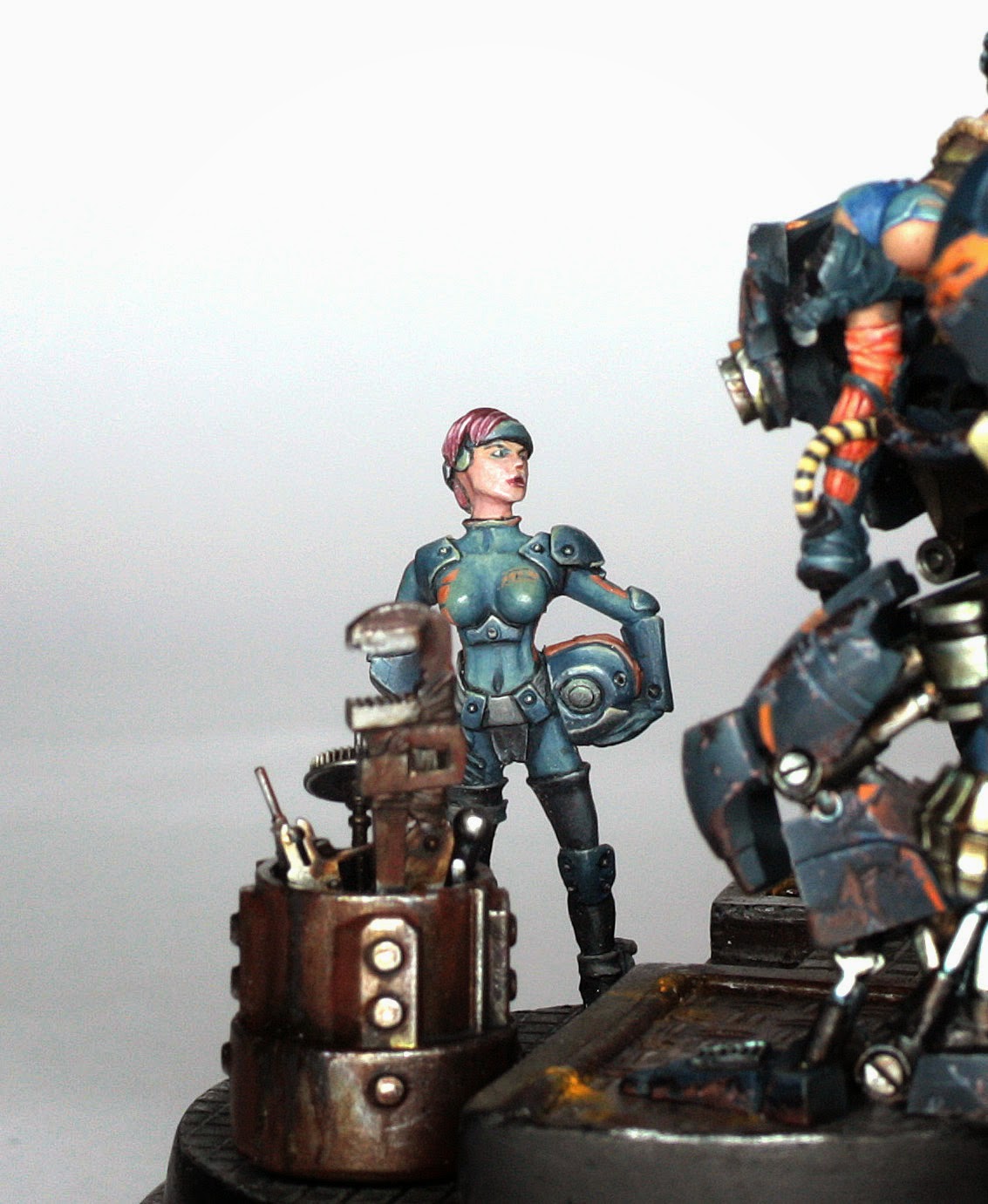 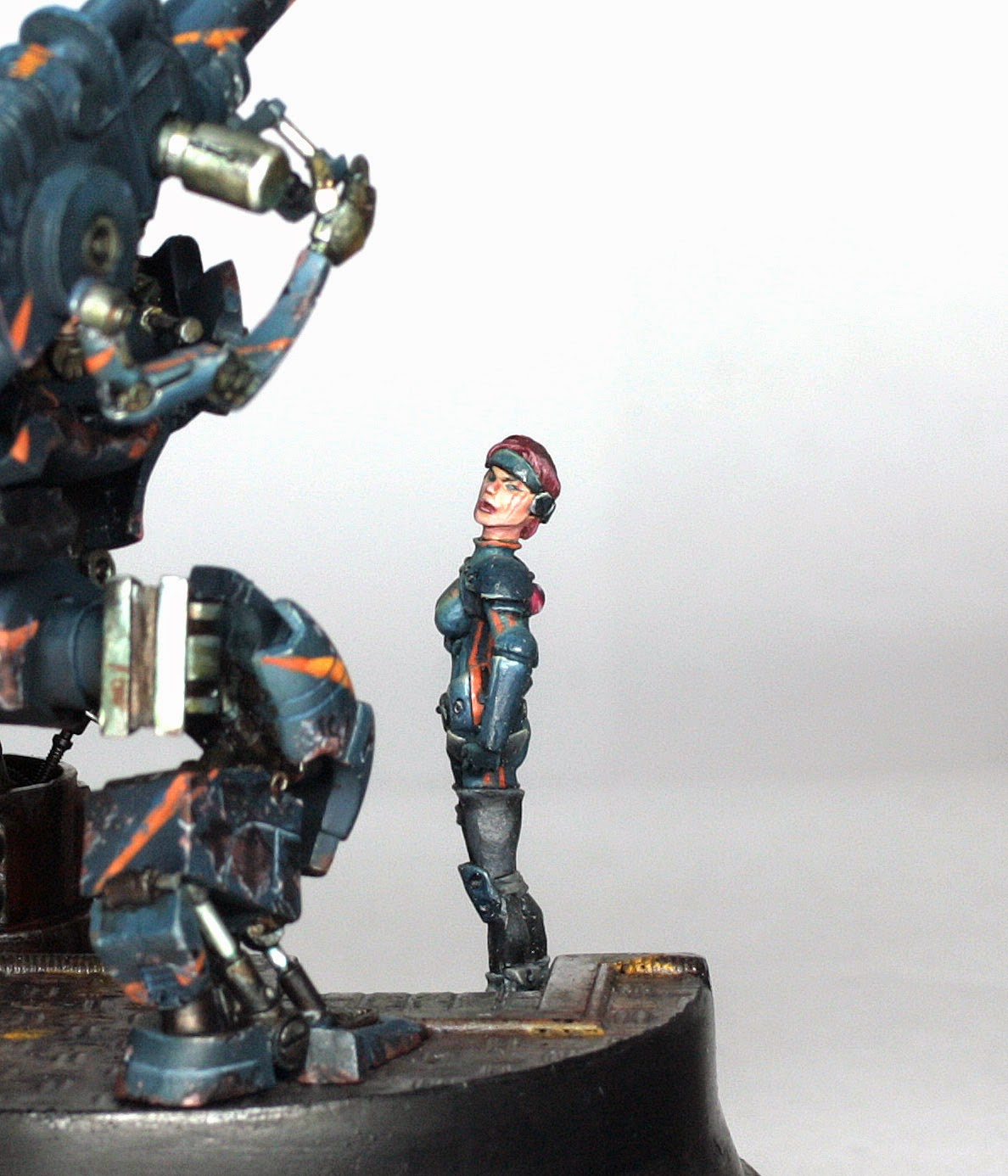 I'm not sure that the white background shows this piece in its best light, but I'm also not sure that the piece as a whole is easy to photograph anyway... :/
I enjoyed aspects of this vignette, and learned a few new things, but I think that I was struggling with a casting that wasn't great, and became more apparent as painting progressed. I felt that I wasn't going to fix these issues to a level that I was going to be happy with, so there ended up being a few things within the whole of the piece that I'm not so keen on.
I also now think that mechs aren't my "thing". Despite the fact that there were two girl models on the scene, it wasn't really enough to get me to push on and make it quite what it perhaps could have been.
I made a promise to myself a couple of years ago that I wouldn't paint models that I didn't like/enjoy, and in the end this was maybe a bit close to breaking that promise.
I don't know whether I'll add this one to my galleries, maybe I'll have another go at photos with a more suitable background soon. :)

Other than this, I am forging ahead with a lovely commission that I hope to be able to show in a few months, and scribbling down ideas for what I plan to do next for myself. I may have some pics up next post of one or two models that I am tinkering with. We'll see...

Oh, and our little boy is 2 years old this Thursday (the 15th). I can't believe how the time has flown, and it reminded me that I painted a mini for Sally & Kev of Hasslefree pretty much while my wife was in labour! In fact it was mostly while she slept waiting to go into hospital, or go back to hospital as it took 5 days for him to decide that he was ready to make an appearance!!
The piece in question was Kalee... 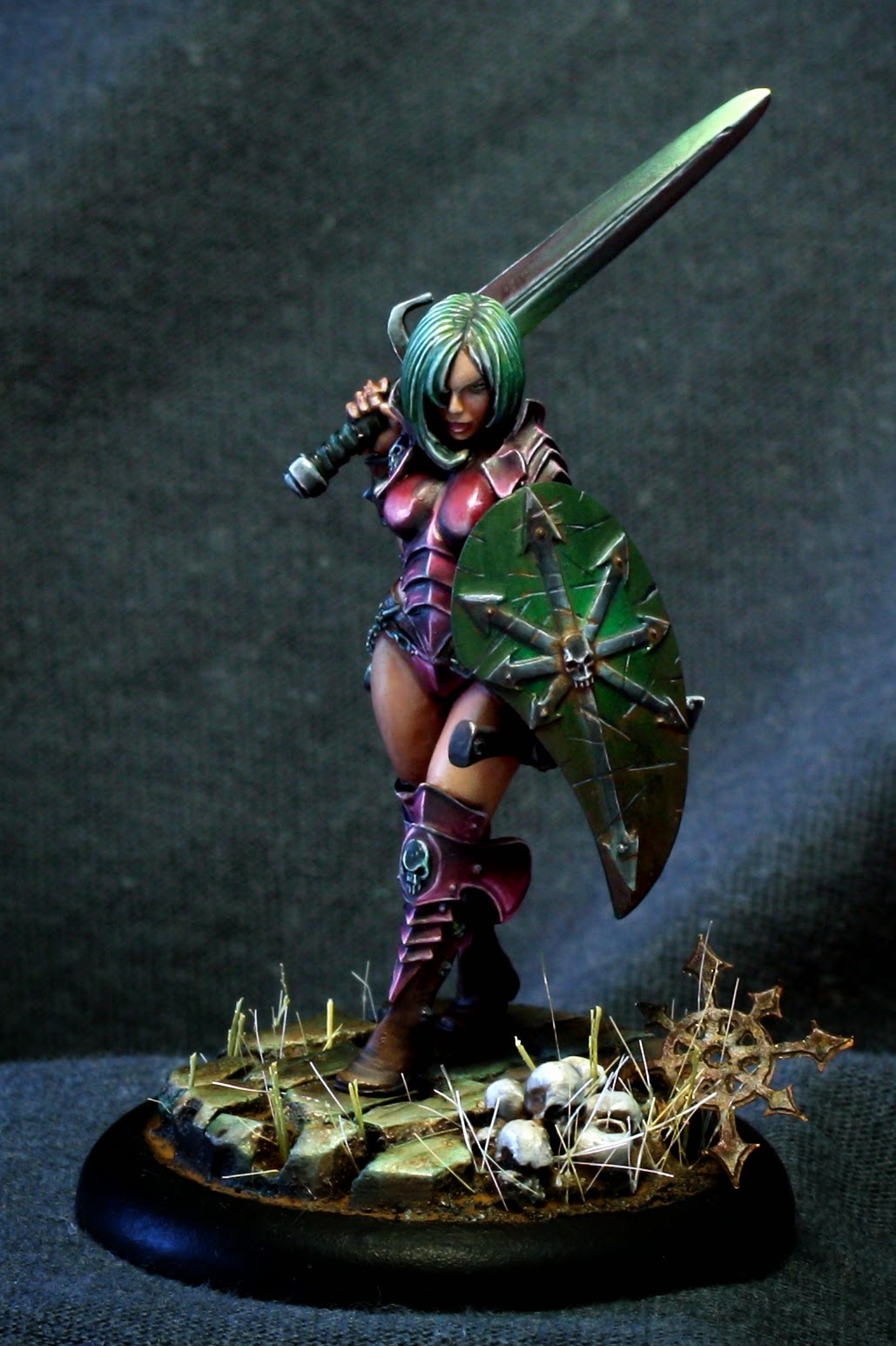 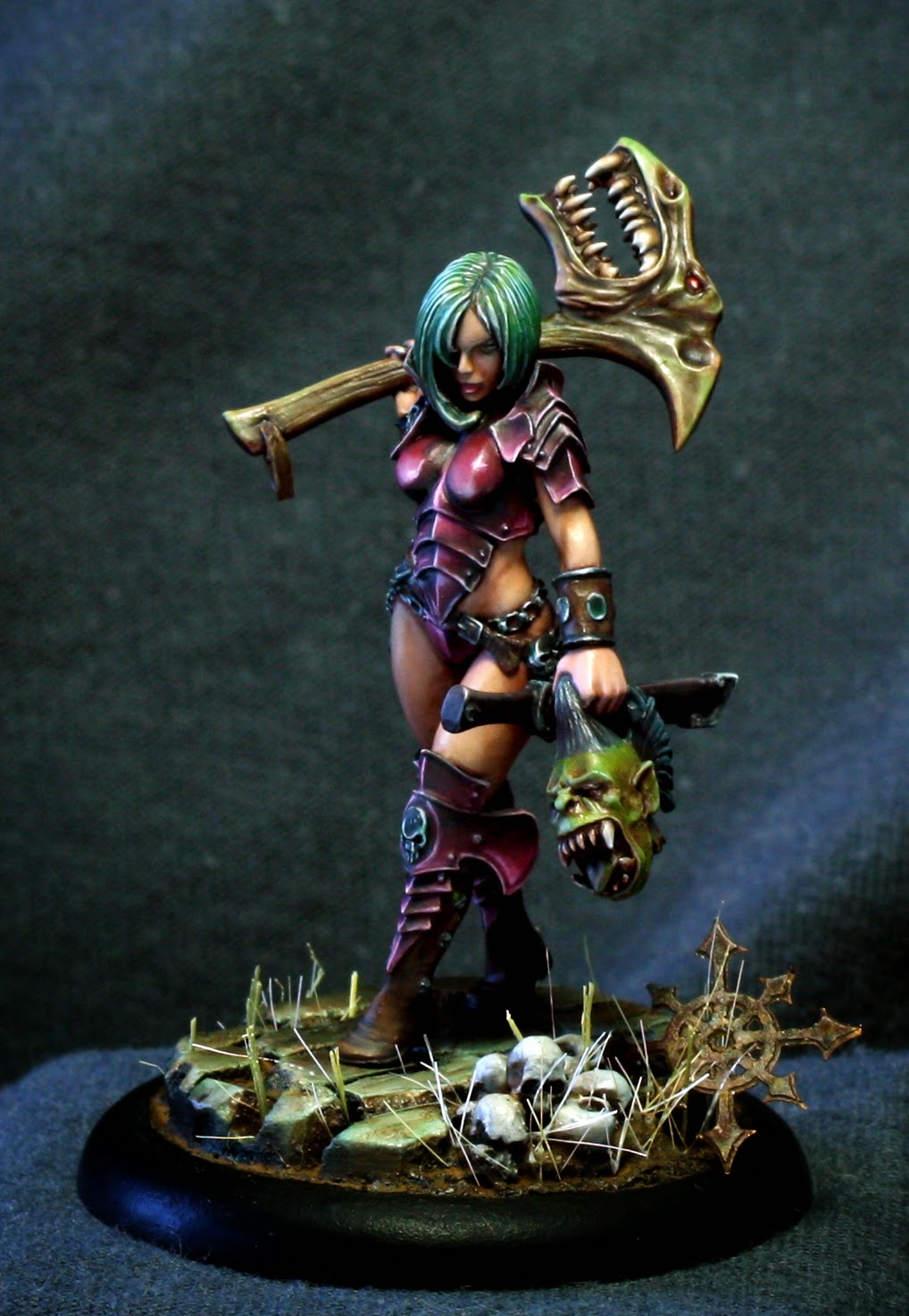 It is frightening how fast time has gone, but this is a quirky reminder of the time and those first few weeks of abject terror when you are placed in charge of your first born!! lol 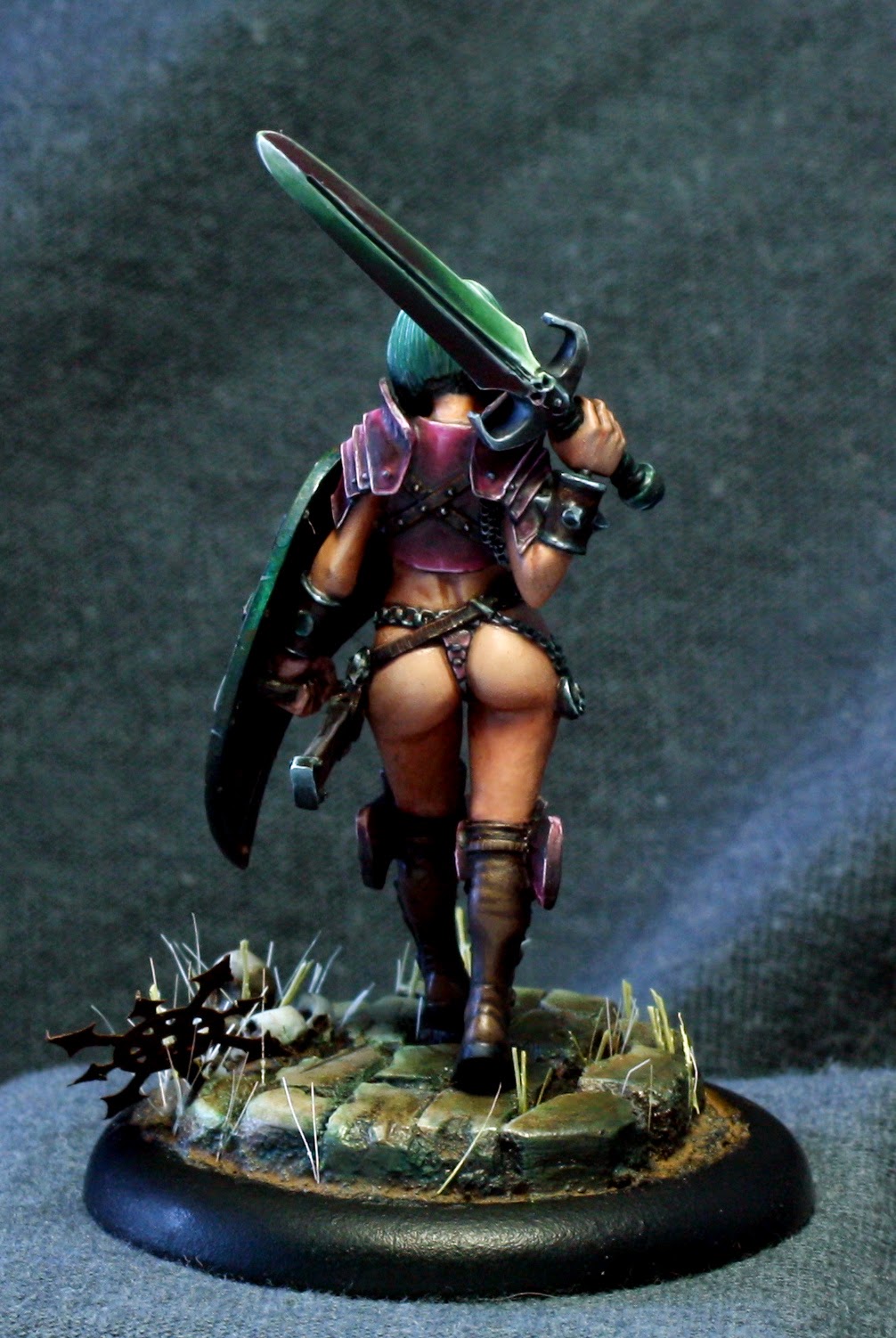