OK. The dust has sort of settled post-Salute. For me the show was a bit of a mixture. Dealing with the painting competition side of things, I entered 4 pieces, of which 2 made it onto the finalists table - the Flower Knight and the Architect Pin Up. Neither made it any further though, which was a little disappointing, but I didn't honestly see the models that they were up against because I was extremely busy for the whole day working on the Hasslefree stand. In the end a lot of friends managed to snag awards, so it was all good.
The show itself was mental! So busy, and so much happening. We spent all of Friday afternoon setting up, then had to be in the hall again for 7am on the Saturday morning to finish off ready for the rush at about 10am!
Fortunately the HF gang treated us to a lovely meal at the nearby Ramada hotel's restaurant on the Friday night, and I followed that up with a few cheeky beers with Pete (Avicenna) and Damien (Mister Dee) and a few other painty peeps.
The Hasslefree stand was 3 deep with customers much of the day, but I managed to slip off just before opening to say "hi" to some of the Brindie gang and to the McVeys. On my way back I was accosted by Adam of Demented Games, who cheerily showed me some of his and Seb Archer's painted pieces for their upcoming KS Project called "Twisted", which is a Steampunk world with some familiar looking and sounding characters. Most impressed was I, and all the more so when Adam handed me a pre-release cast of Seb's Crystal Brush gold award winning sculpt M'Dusa that can be seen here - LINKY - so big thanks again to Adam for that. I was great to meet you and all the more impressed as you Twisted lot had been globe trotting to Crystal Brush (Chicago) and Salute (London) from Australia in quick succession!

I don't have much to share in terms of new painted toys this time as I've started on a fairly big commission project. What I can show is the fun little commission that I did for Wamp called "Thugz Bunny"... 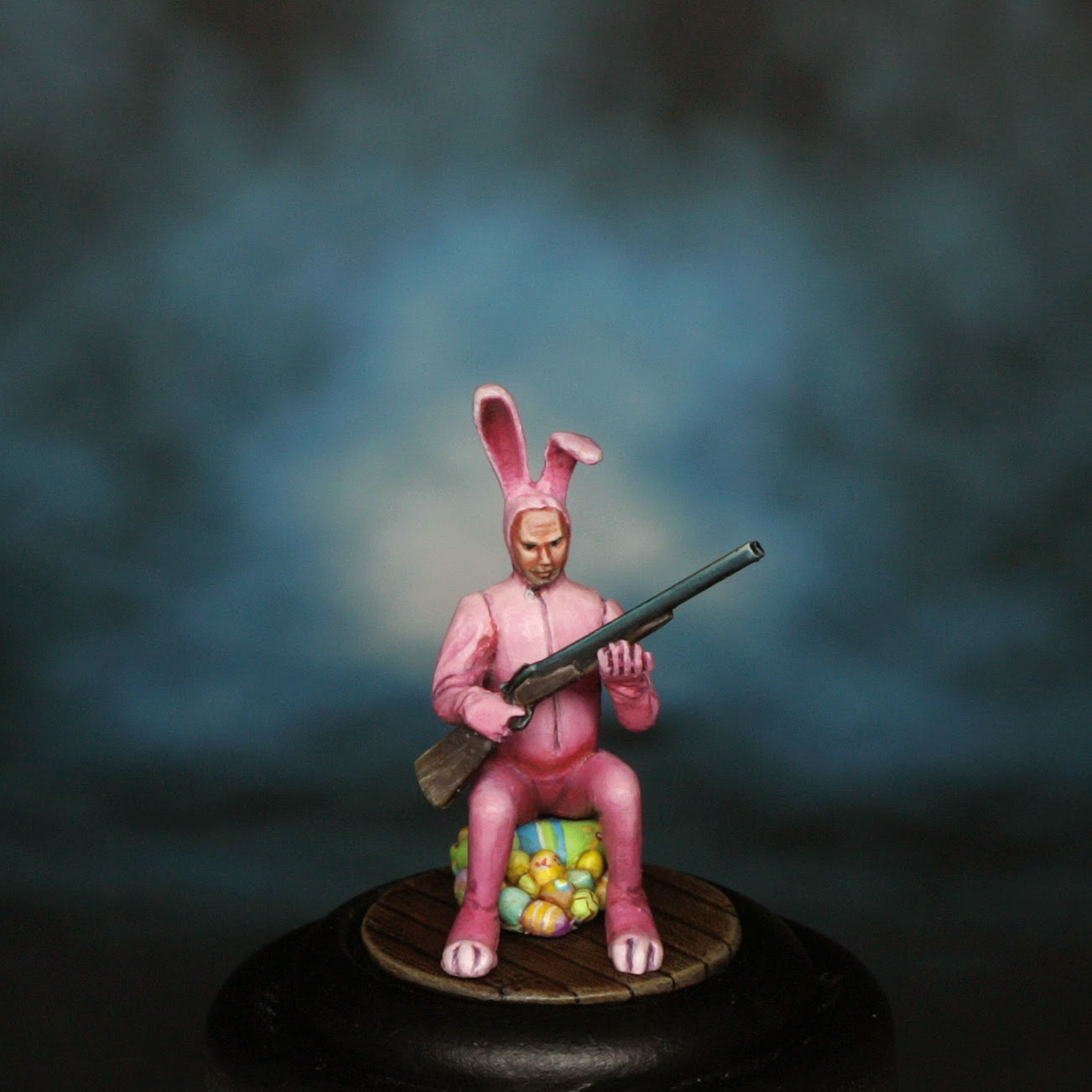 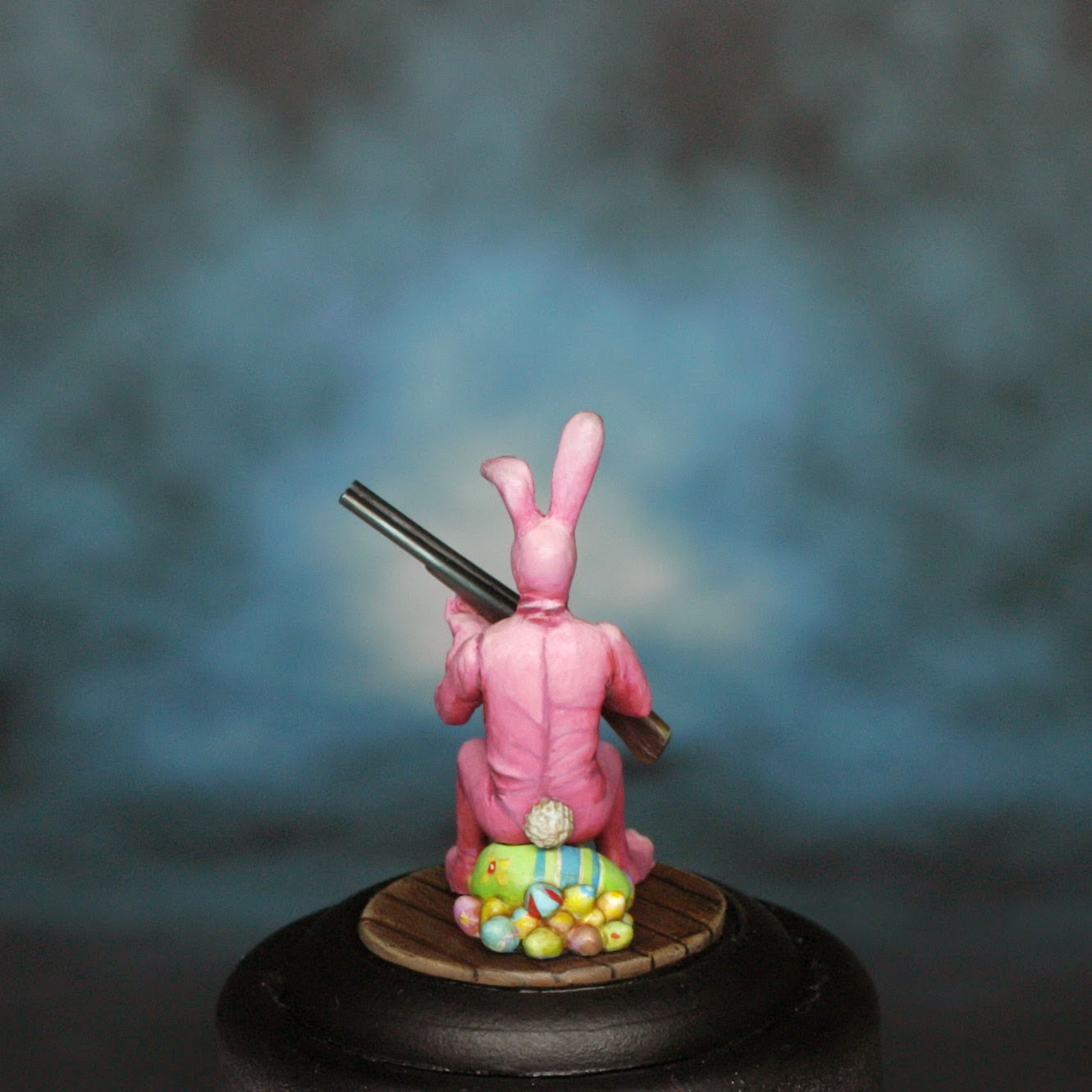 It's a quirky little "Marmite" piece, but good fun and obviously seasonal :)

It is also well worth visiting the Wamp store in the link above, as Brett tends to stock some less easy to obtain minis and accessories all in one place. Currently, I believe he has taken stock of some of the new-ish Bombshell line of models, which is a range of pin-ups, sidekicks and just plain bizarre (in a good way) sculpts around 28mm size. Then at the other end of the scale there are a couple of the latest Michael Kontraros sculpts, including his Elf Dragon Prince piece. In between you can find the likes of Studio McVey, Hasslefree, Ax Faction and Guild of Harmony, along with paints, bases, plinths and putties, so make sure that you pop along (tell Brett I sent you! ;p )


I really ought to get final photos of the Soda Pops piece done, but my photo rig is set up especially for the current project, and so it will have to wait for another day.

In the mean time, and with bunnies in mind, I thought I would pop in a piece that I did a little while back, just before the little one was born - wow! nearly two years already! - which I called "Girrrls Gone Wild"... 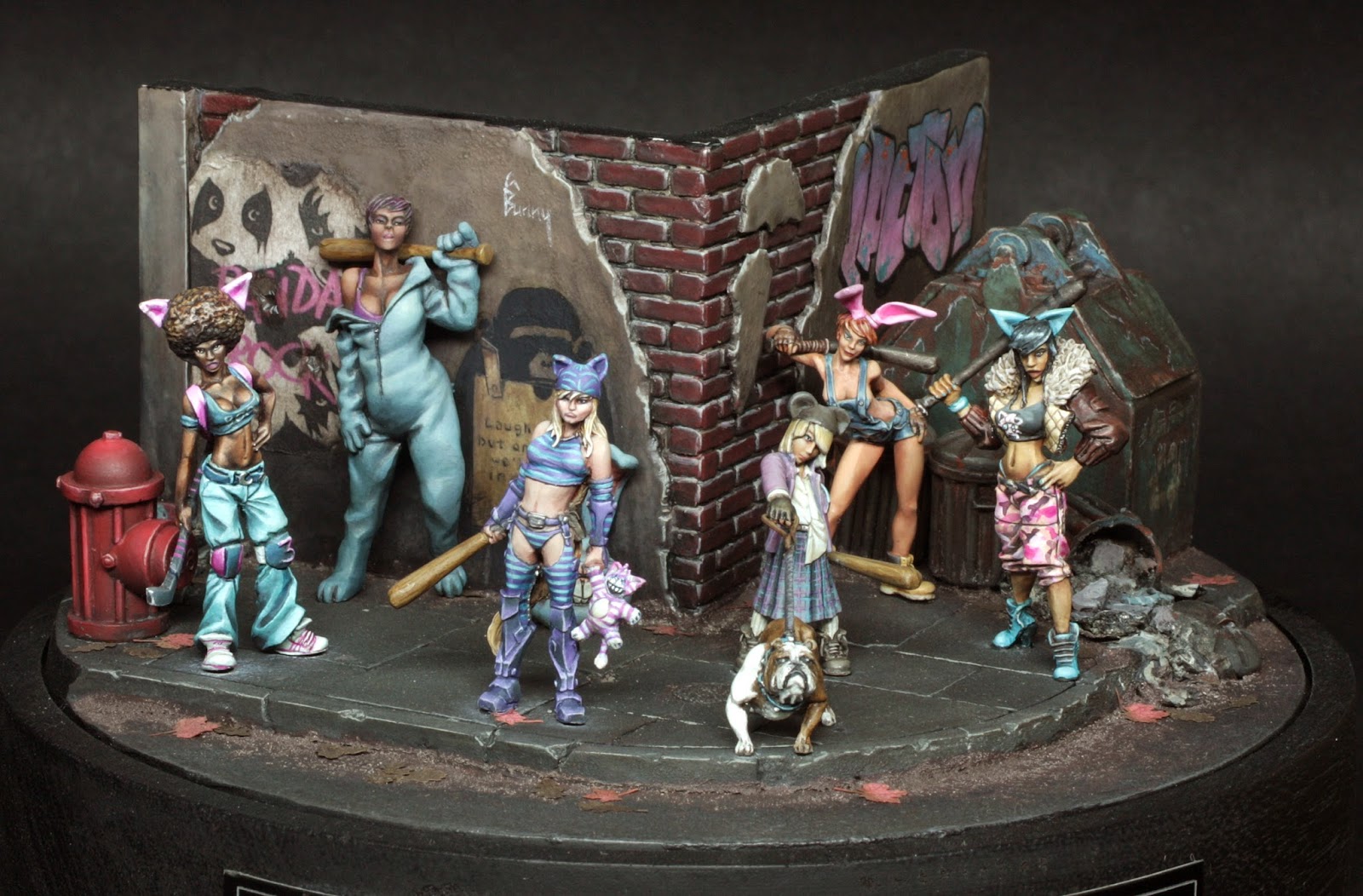 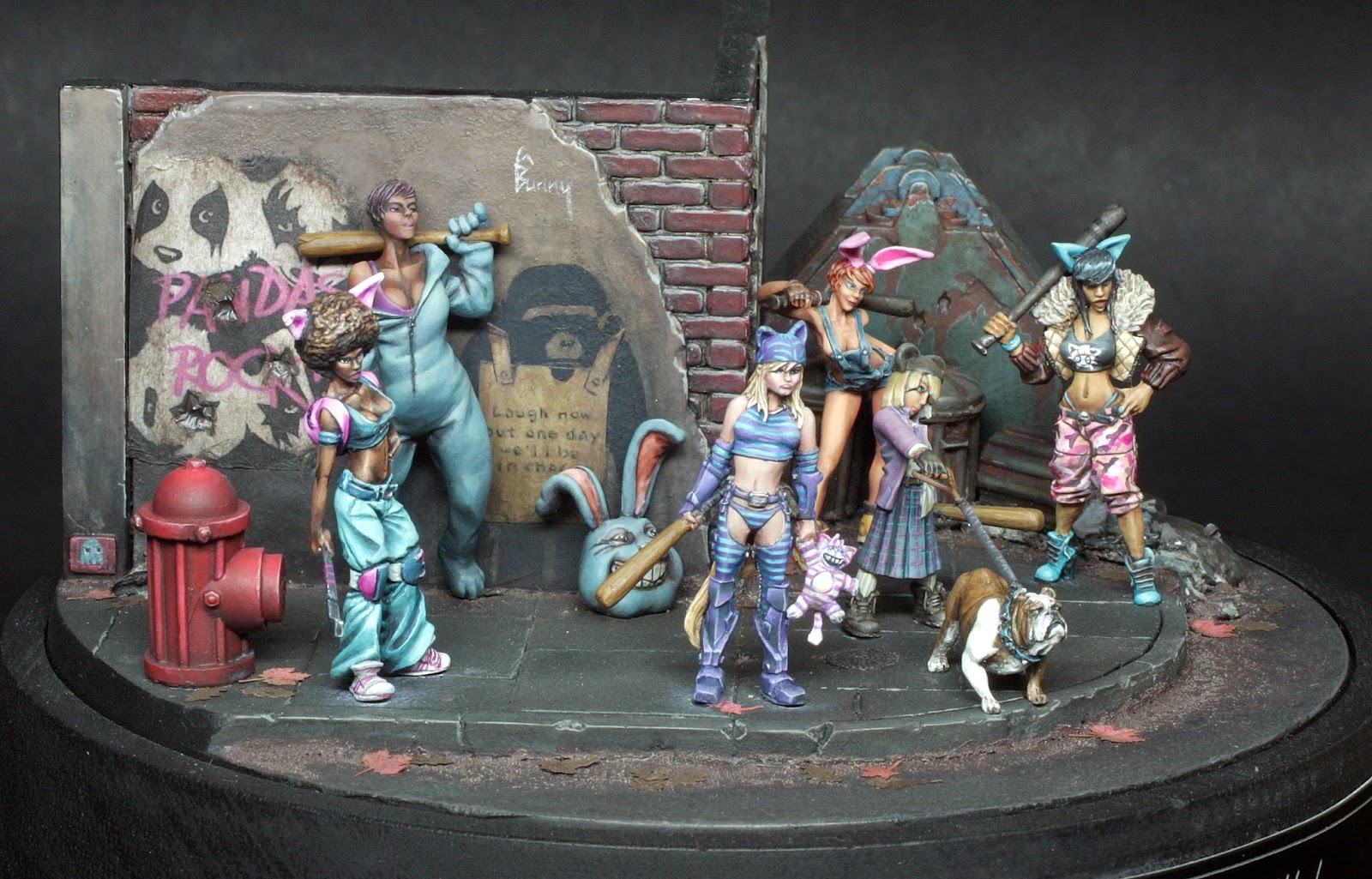 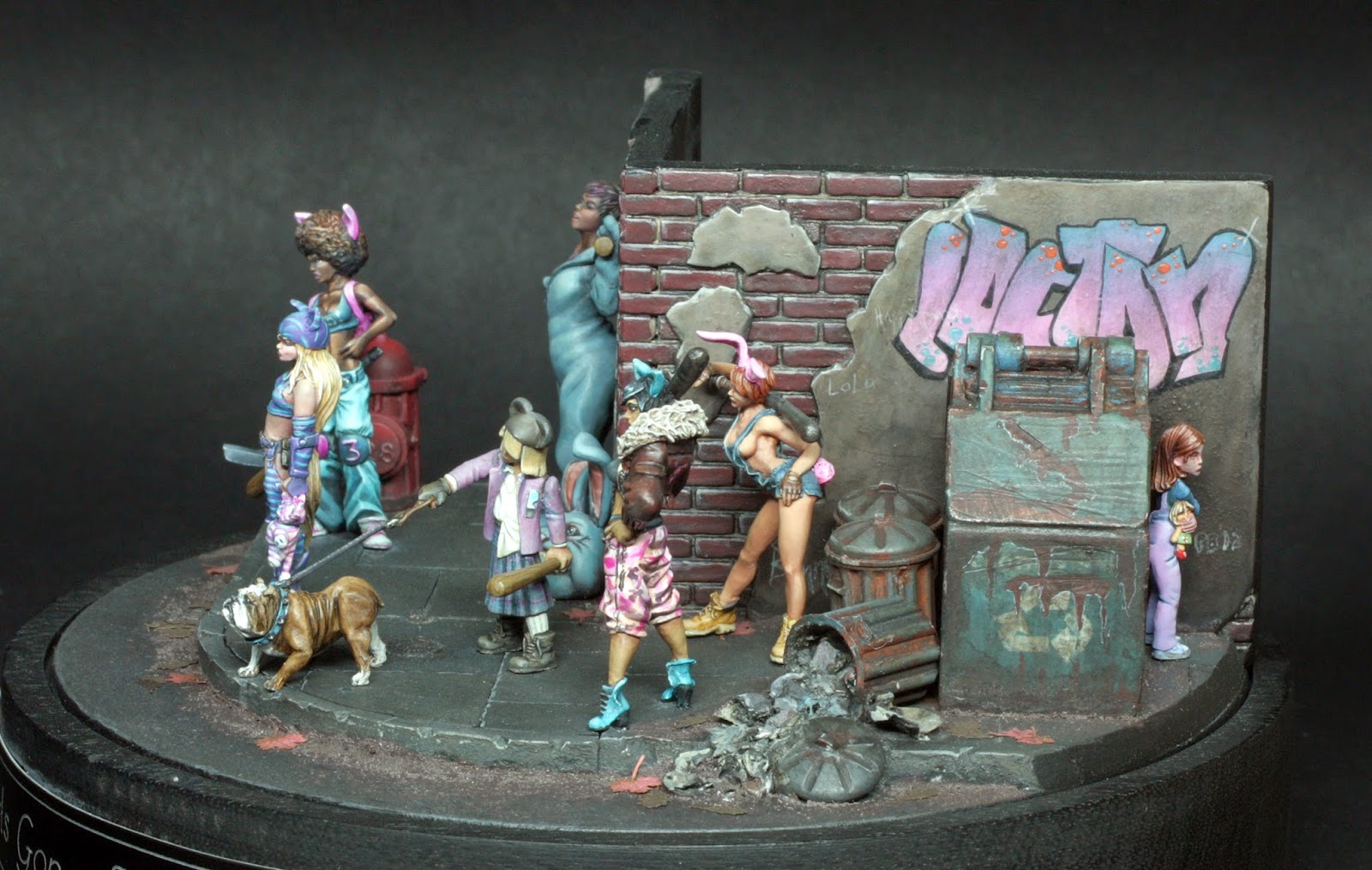 The piece was an idea I'd had for a while based on those cinema poster/DVD covers that you see for youth gang type films, like Kidulthood and such. So, I built a street corner and populated it with a bunch of mean looking girls from various model companies, with a linking animal costume theme and a similar colour scheme. In the scene there's lots of nods to street artists whose art I really like too. I was really pleased with the final look, and despite not being a project that has won any awards or anything, it is still something that I am very proud of as a fairly unique looking piece.

The next update is likely to be more musings than new stuff too as work progresses and I take a few days off with the family too :)