Whilst I have been enjoying this model, it does feel like it has been taking a long time, and that I've not made as much progress. However, with this new update, I think that Cassandra is definitely moving towards her finish.

So, what has been done since the last update? Well, being a sucker for punishment, I've gone a bit all out with the shield by adding some sky-earth type non-metallics to the outside around the fish, and then around the rim on the inside. Further, I then decided to paint on a load of electronic circuitry to the inside of the shield.
I've tidied up the glowing areas (and removed some parts that weren't working around the shield and the little faces in her armour), making them more concentrated and enhancing one or two spots, most specifically the glow of the angler fish' lure, which I'm quite pleased with.
Then, most recently, I've painted the rather provocative spear, with its glowing, erm, business end... lol
Lastly, I've started to sketch in the light and shade of the skin. The intention is for it to be the combination of blue and pale flesh that you see, but obviously blended in better. After that I hope that it will be final tidy ups and final decisions with the base as I am torn between two options which I'll reveal another time.

For now here are the pics... 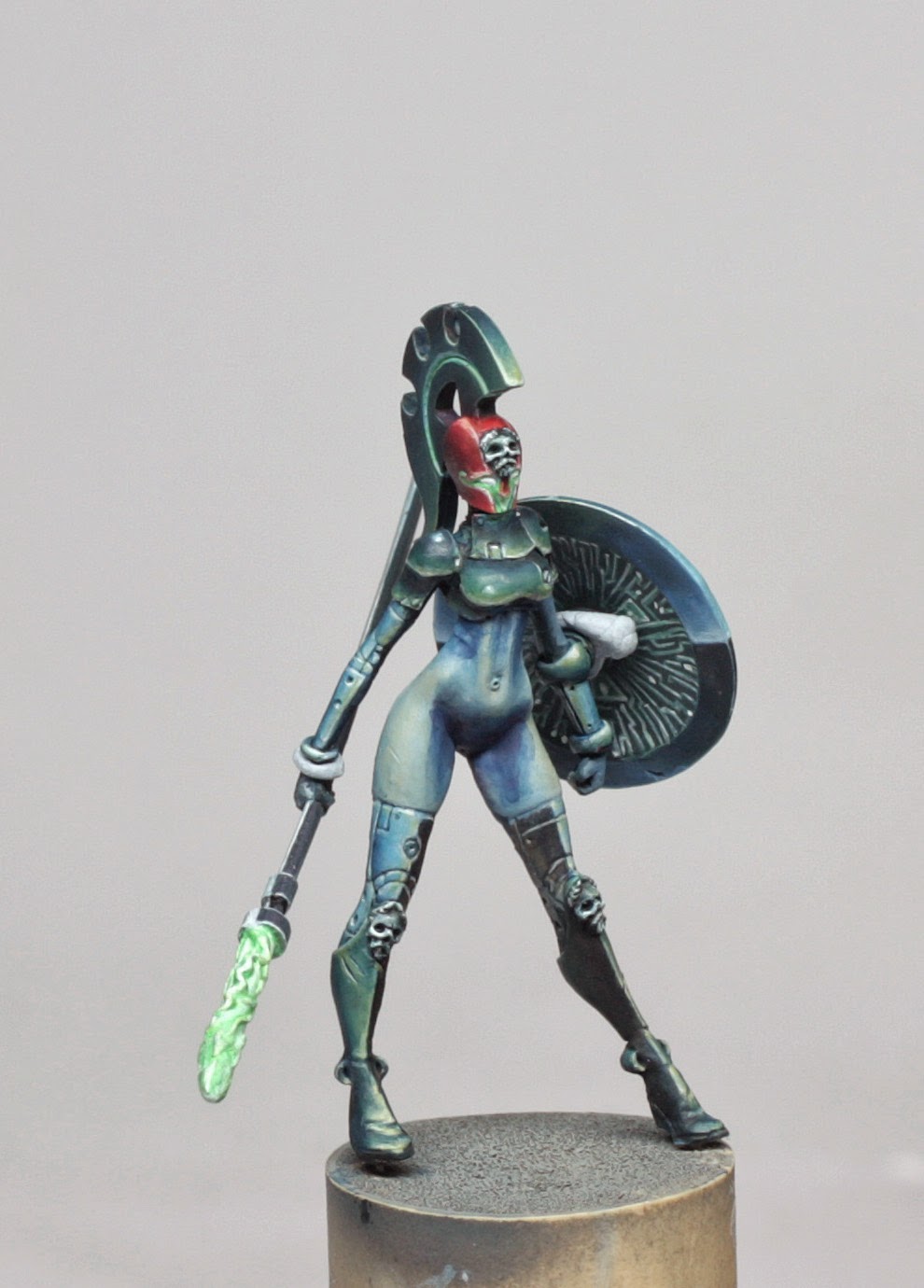 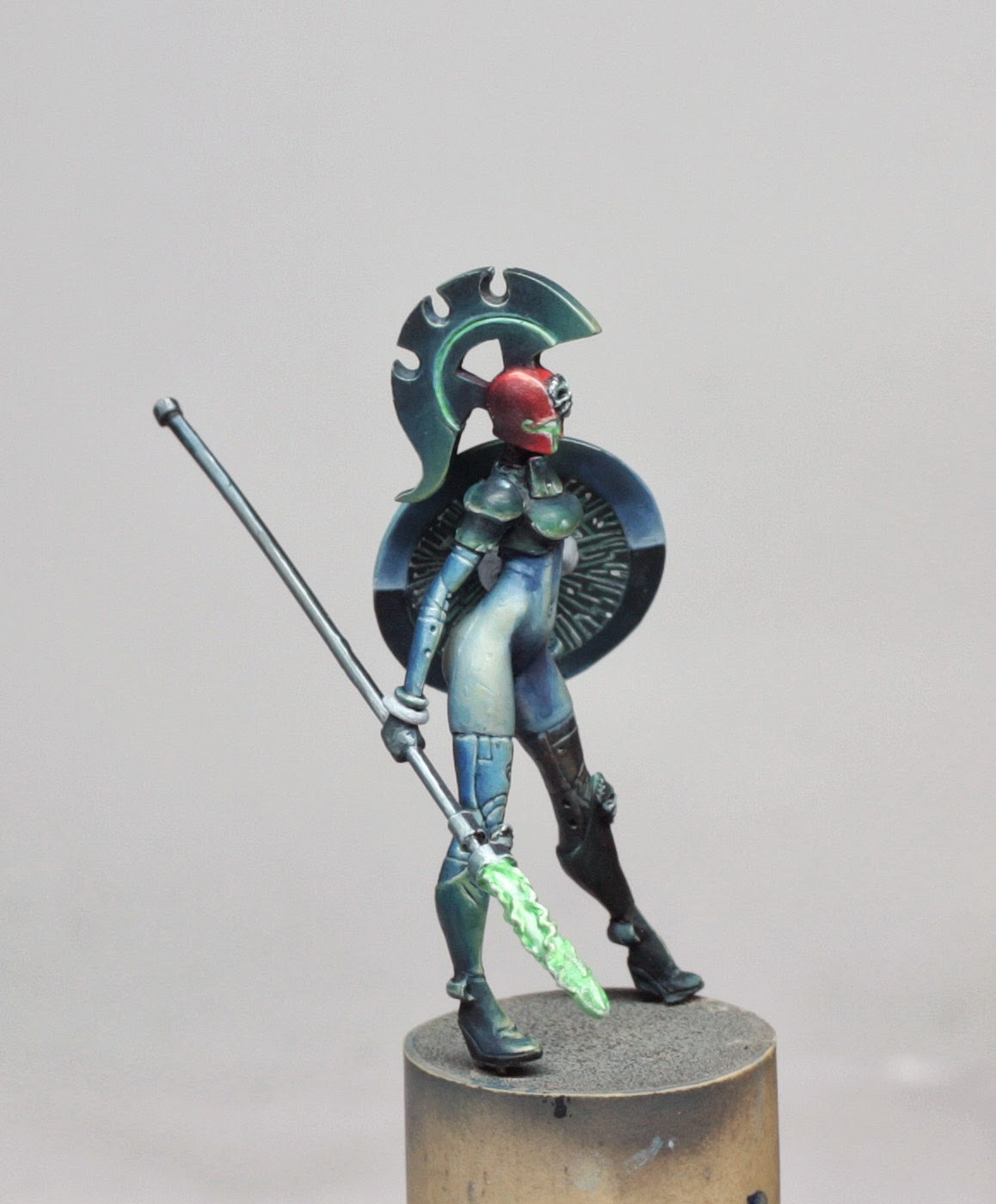 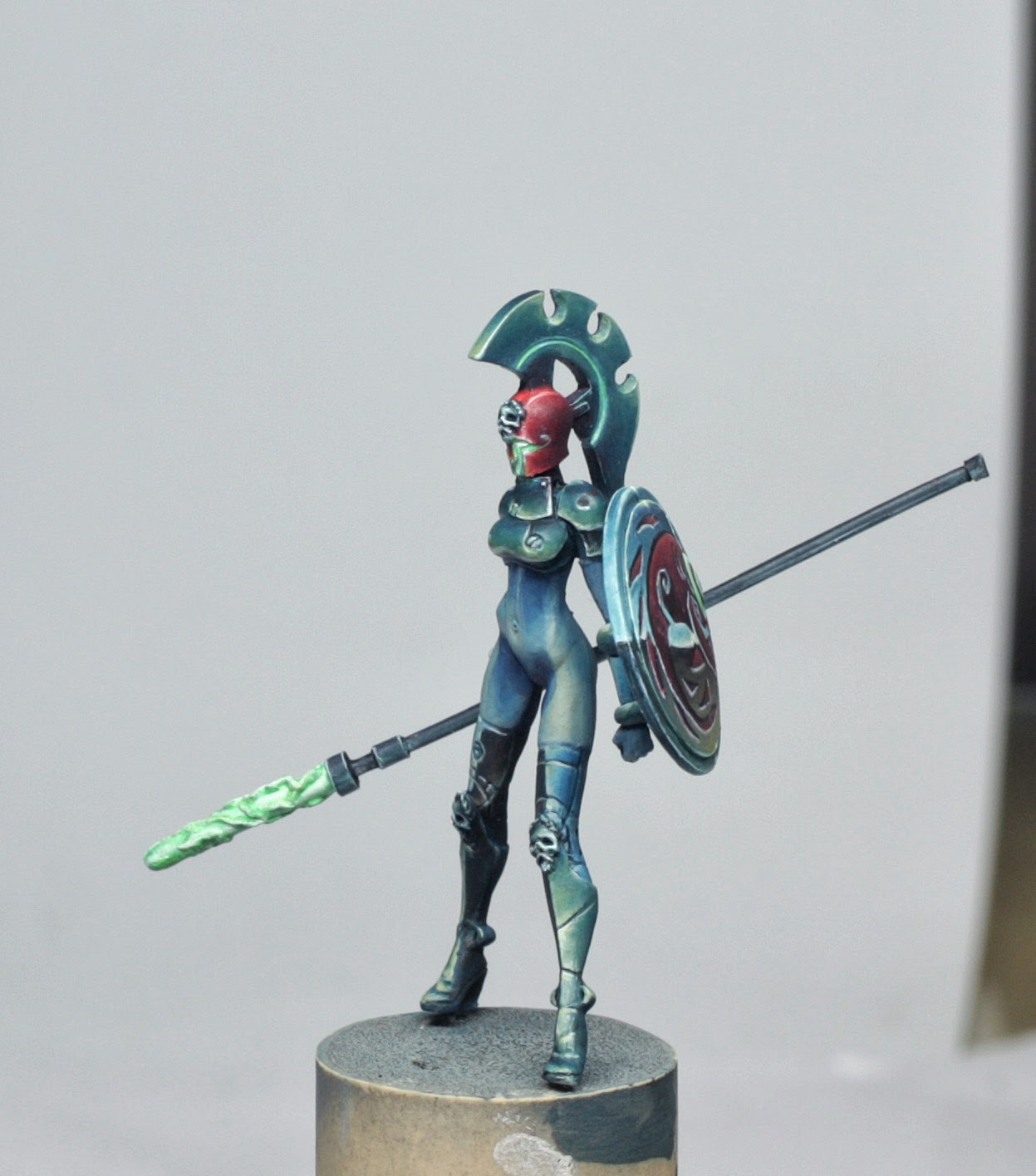 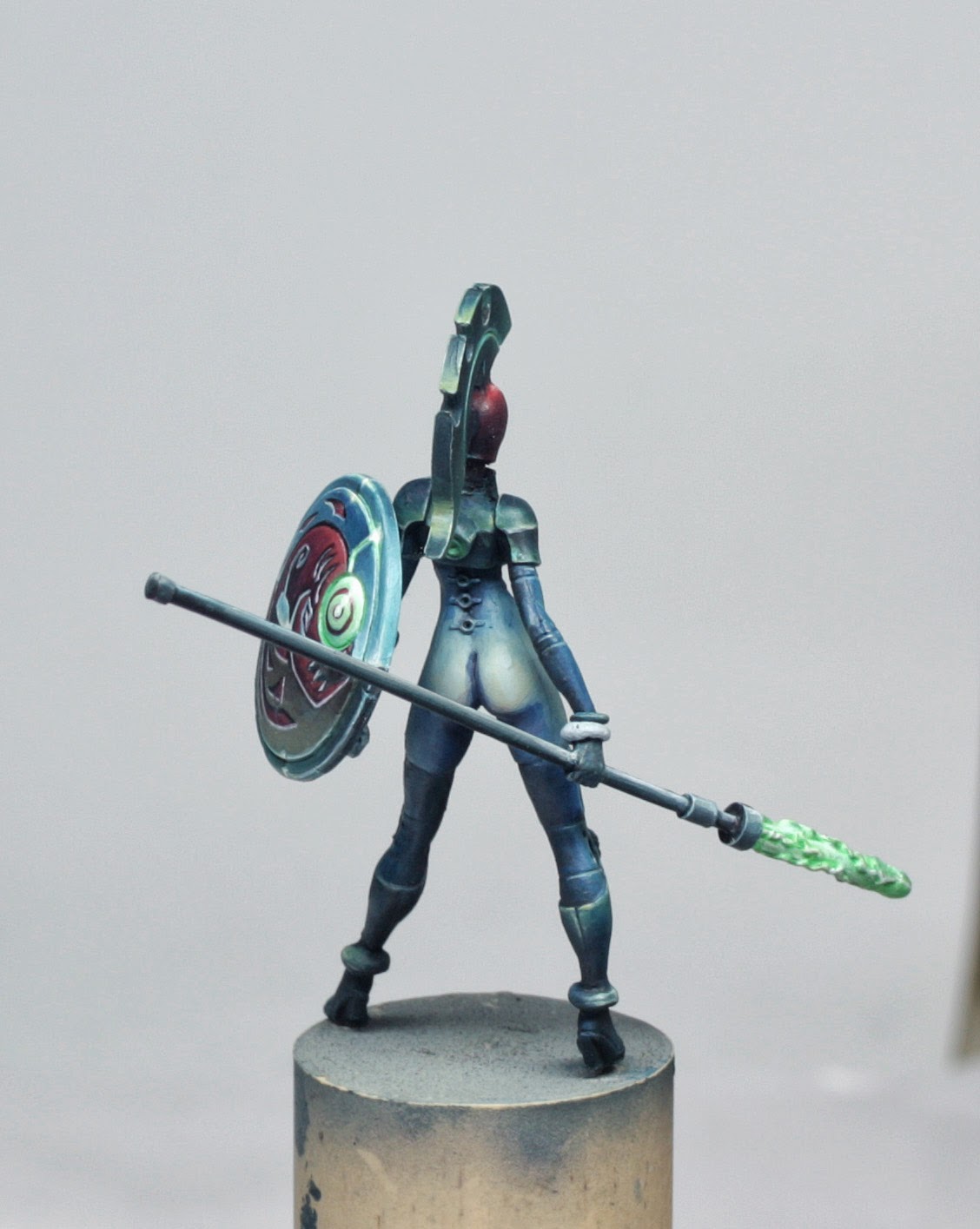 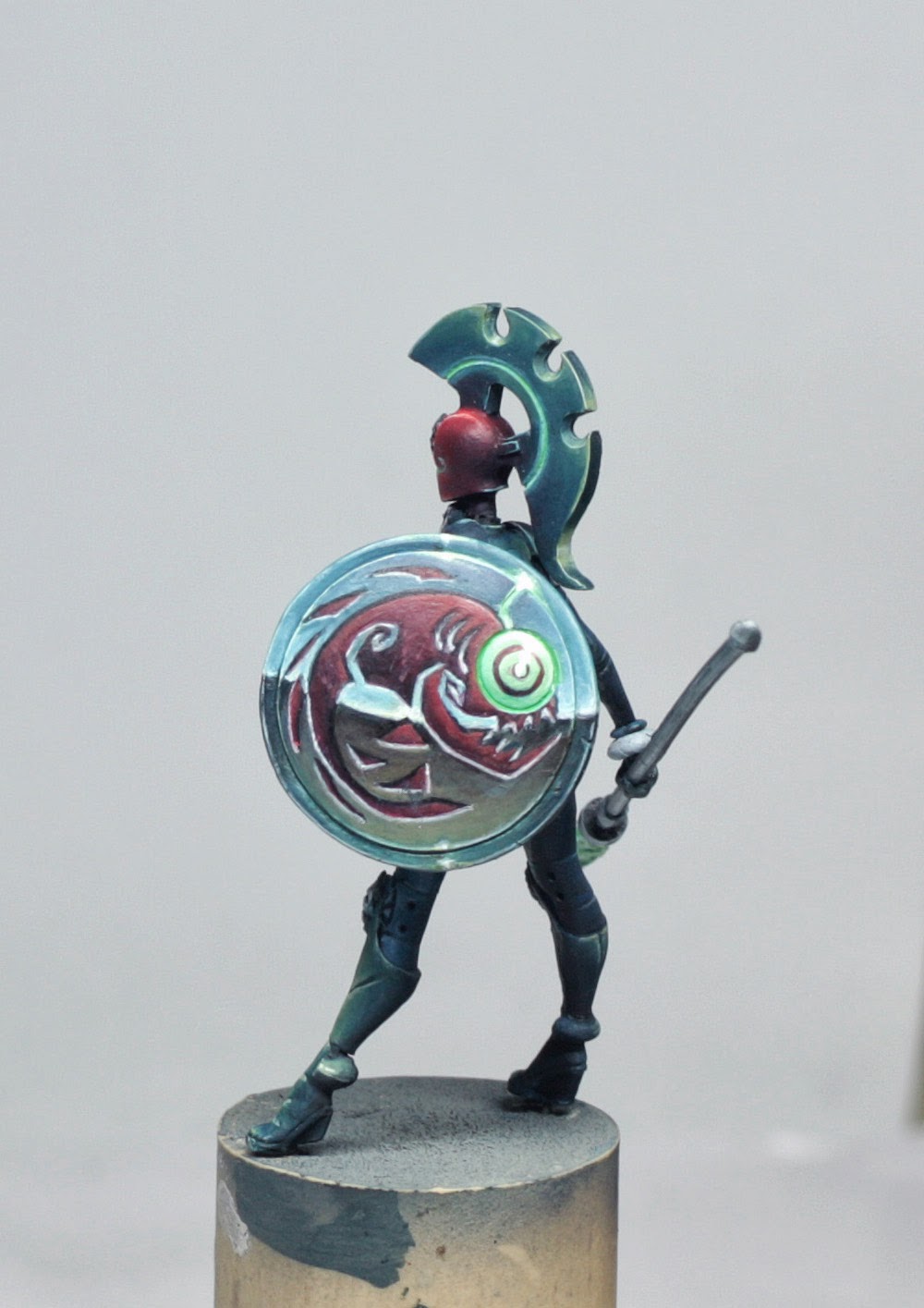 In other news, I've picked up a couple of commissions in the last week or so. While this is really good for me, it will more than likely mean that I won't be showing off anything without clearance from the clients (one commission will definitely not be shown for a while). And so I'll have to fill the gaps with musings about new releases and some older minis. I also will be working at Salute at the ExCel centre in London on April 12th for Hasslefree miniatures, so I'll try and do some sort of report on the show, with pics of what I succumb to buying! lol
Posted by Unknown at 12:44