It's been quite a good week or so since the last update, and I had intended to post sooner, but circumstances hadn't allowed for it. As it happened, this meant that today's post could now include one of those little air grab moments...

I finished painting M'Dusa just over a week ago, and previewed her fixed to the base in the last post. However, due to a bit of a dim moment on my part, I glued her slightly out of centre on  the base, and left a void to one side that completely unbalanced the piece as a whole. Disaster! What to do?!
(I should add that at that moment I was really more keen to move onto the next piece that I had planned, so spending more time painting her/something to go with her was not on the agenda!)
Well, I spent a day or so avoiding the desk because I was annoyed at myself, but I did try to think of what I could add that would help tell a story with the piece as a whole.
It was already established from her name that she is some kind of mechanical hypnotic snake lady, and of course the snakes in the head dress and the goggles and stuff add some flesh to the bones of that idea. So to ram that point home I thought perhaps I should add a statue or a bust to the scene for the whole "turn to stone" part of the myth. I hunted through the bits box but couldn't find anything that jumped out at me. THEN I thought a bit more about the steampunk aspect of her persona and picked up my sheets of steampunk and fantasy brass etch that I bought from the Etch-Master Indiegogo campaign a few months back and spied a tiny little pocket watch and chain. BANG! That moment of knowing EXACTLY what I needed to do presented itself to me. Then I spotted an odd drum thing on my desk from a Kingdom Death kit, and thought that I could make a nice table out of that, especially if I can make some nice fine legs... Oh look! Railings on the brass etch! They'll make perfect wrought iron legs! Oh look! A quill! Coins! Lol!
A couple of hours later I had assembled and painted all of my new accessories. I glued them in place and had one of those "That'll do, pig. That'll do" moments. ^_^

I then got some final shots done and shared her on P&P and Coolminiornot...
The response was so positive that I have been slightly taken aback (especially having had a fair amount of negative stuff sent my way on CMON in recent times). The most encouraging event being that Seb Archer, the sculptor, took the time to let me know that he loved my take on her, and particularly why he liked what I had done too.

Lets do pics before I waffle on any more than I already have... ^_^ 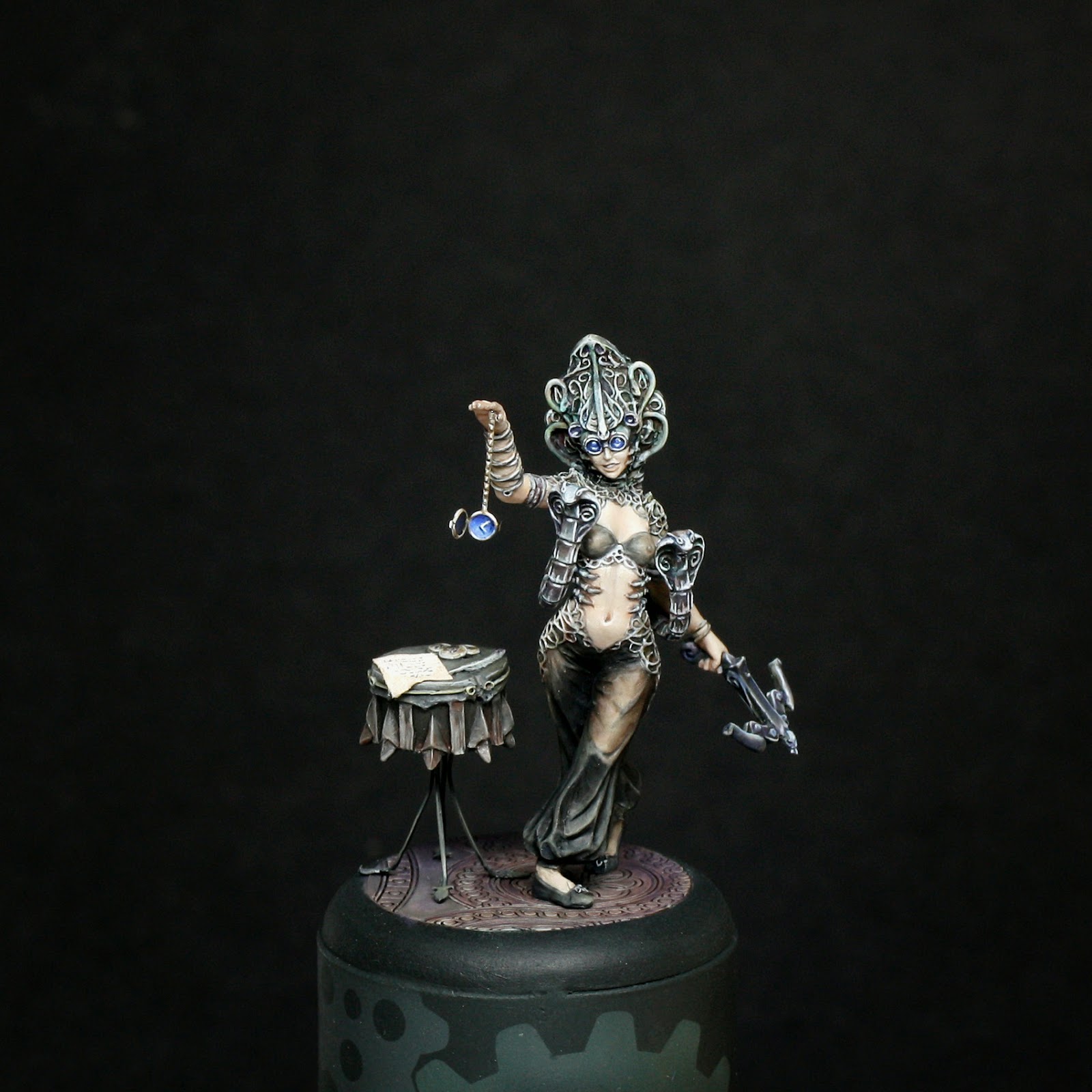 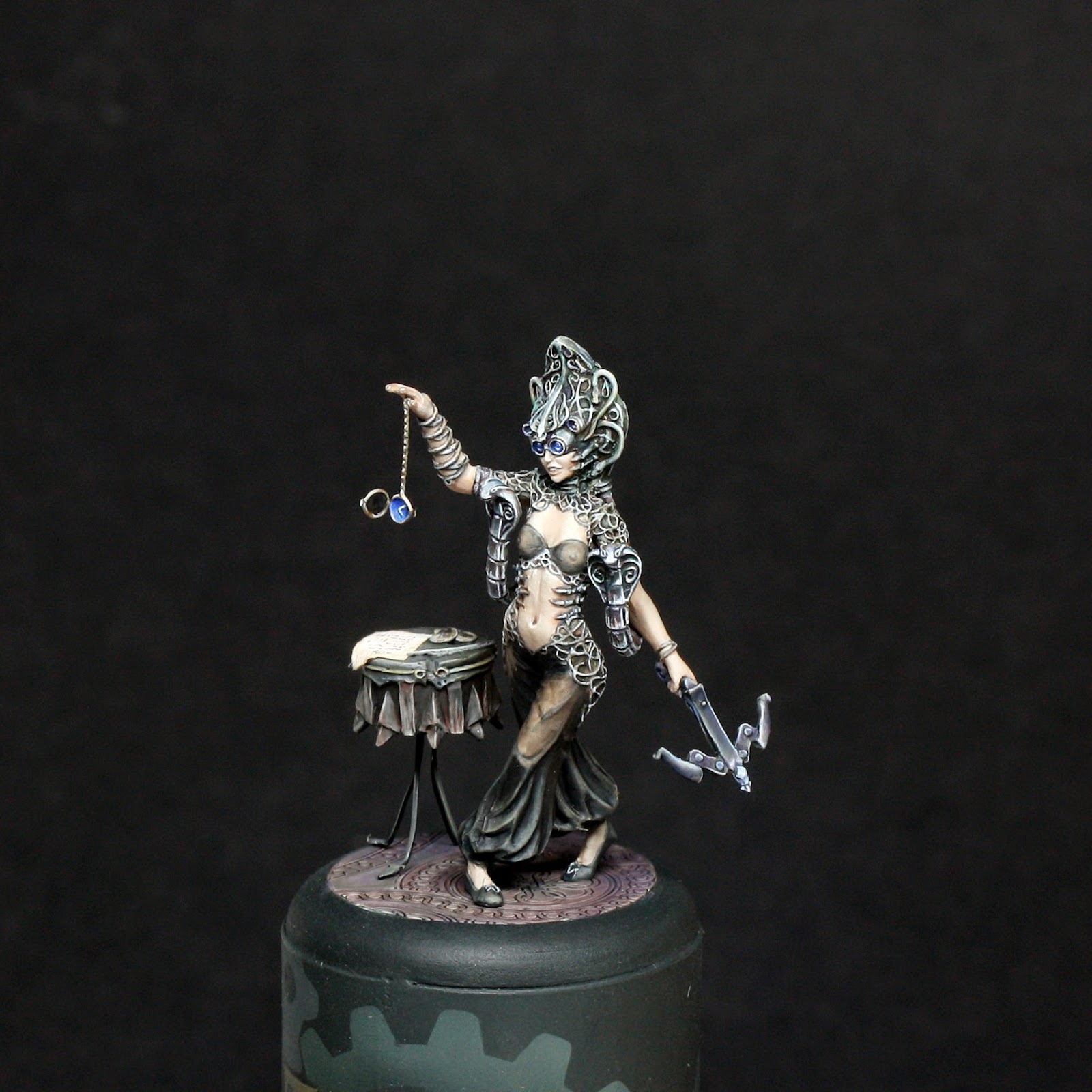 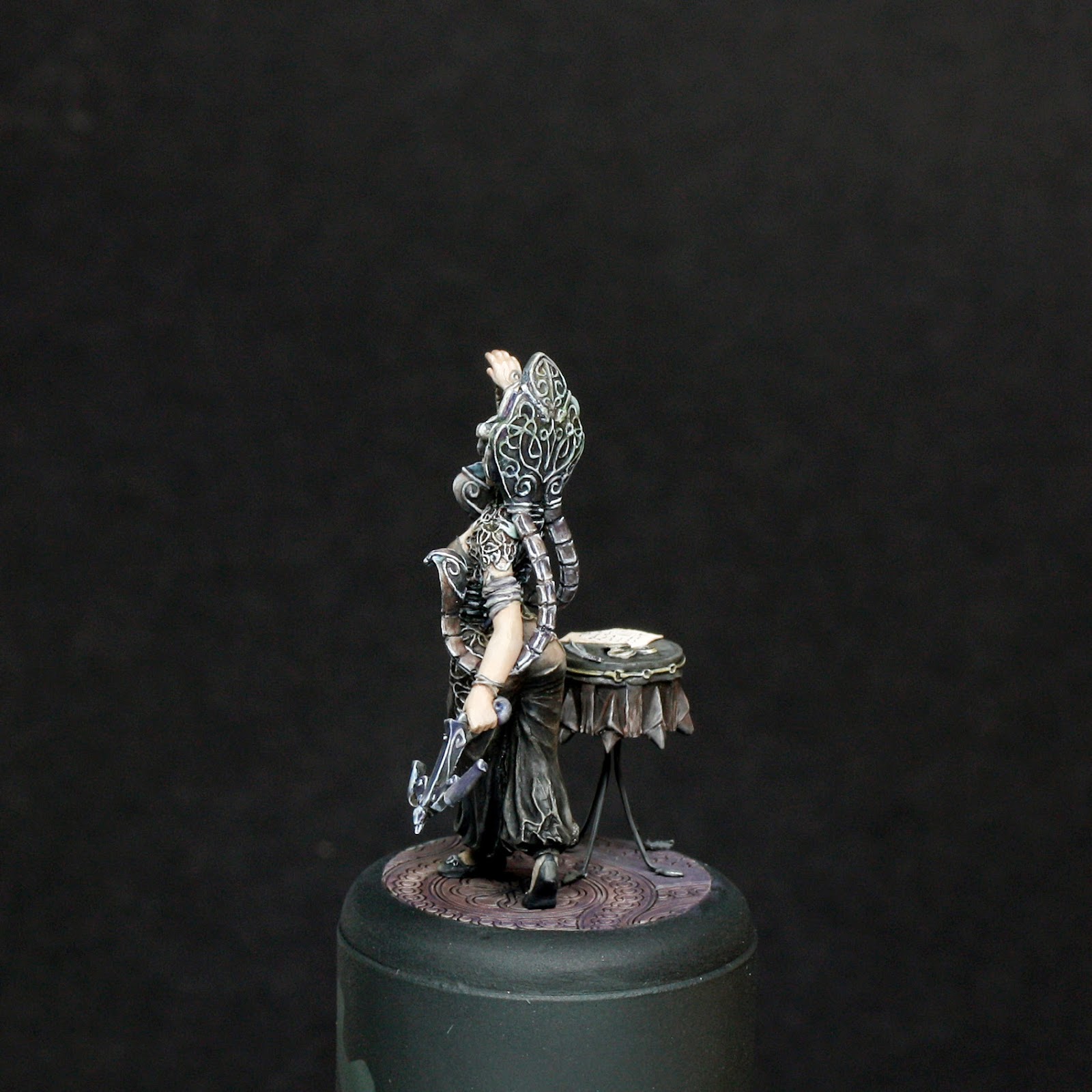 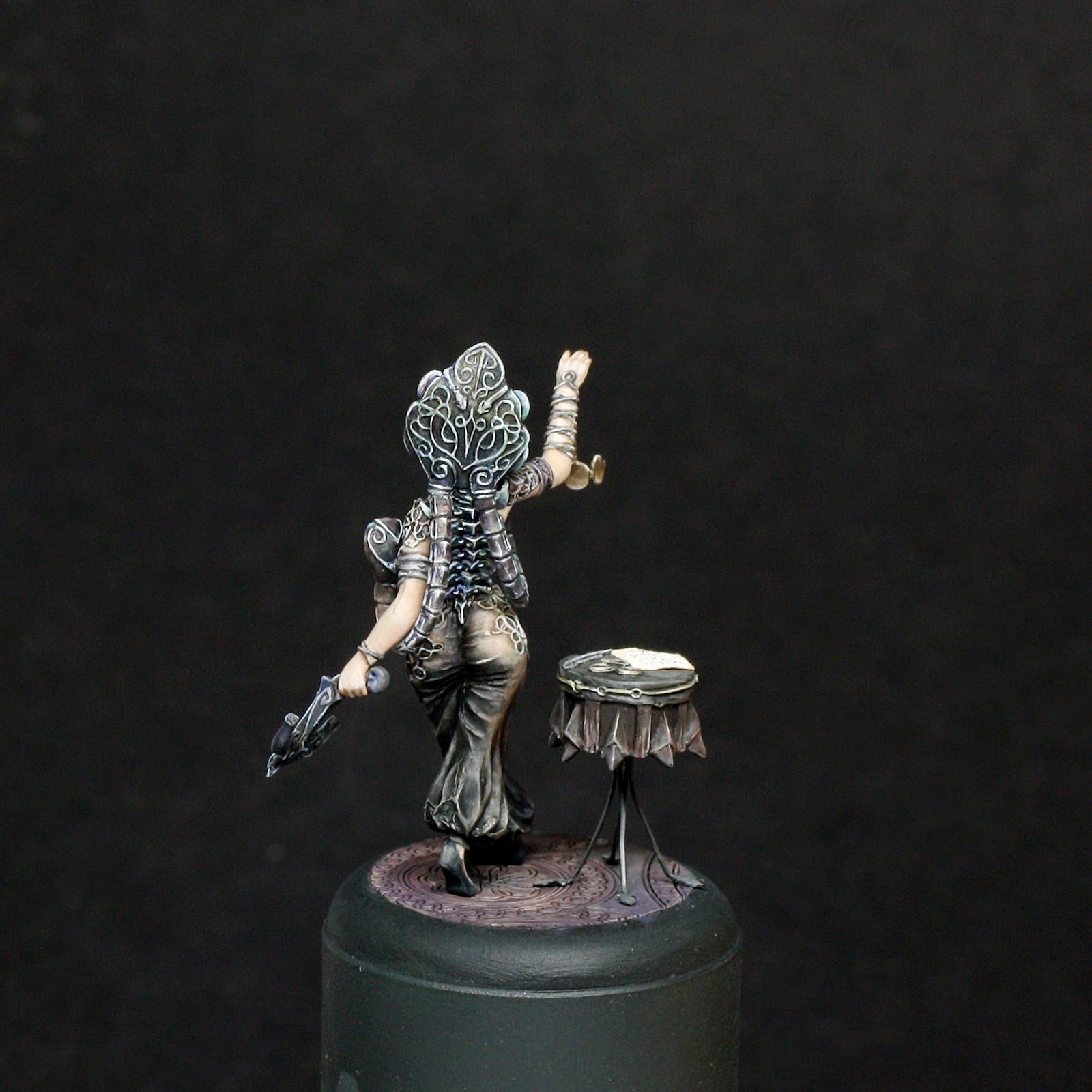 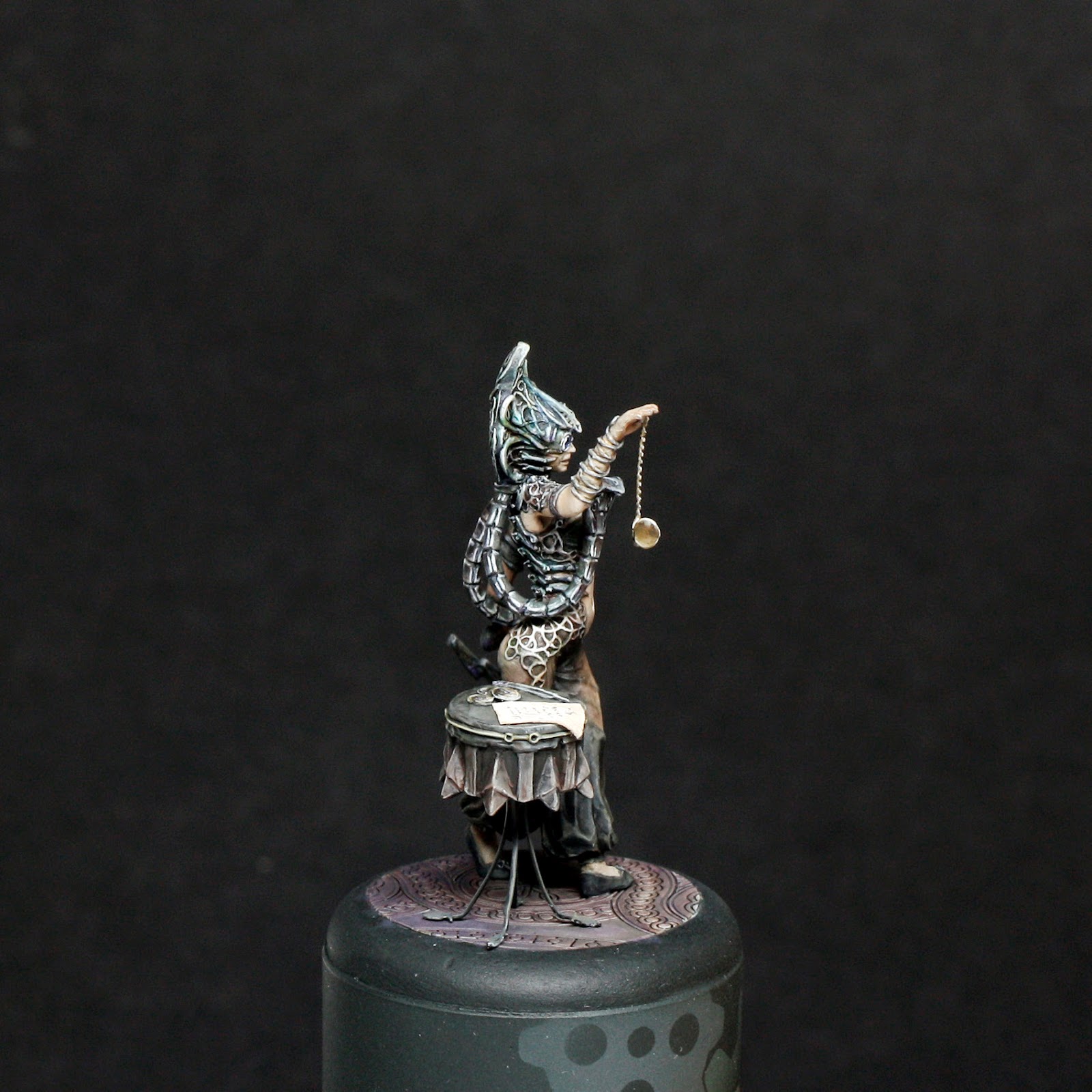 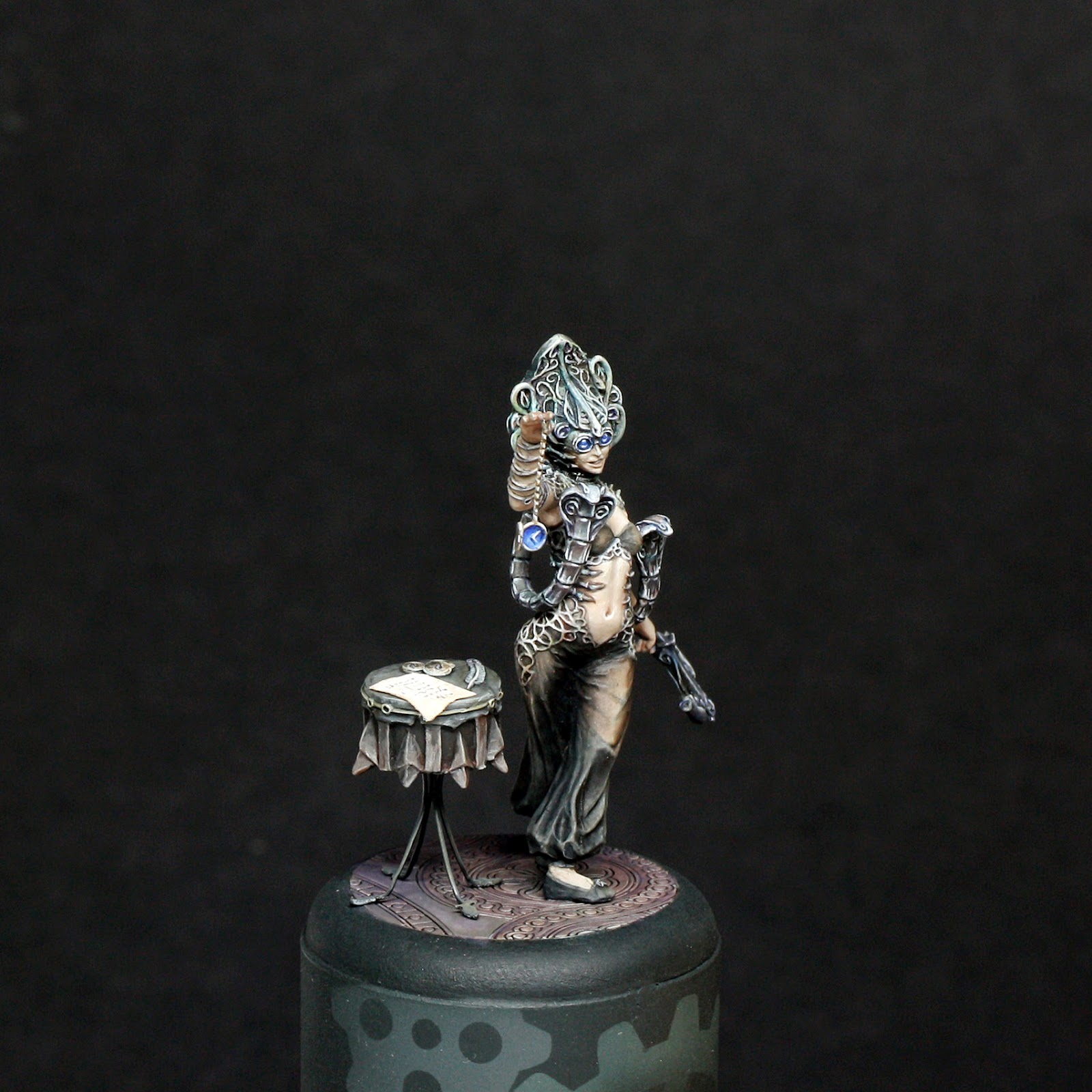 She has been my first "gold" on P&P, and just this morning has appeared on this week's "Top Last 7 Days" page on CMON, and for a few moments at least was the number one for the week too. This is something that I don't think has ever happened with any of my pieces - and there is every chance that it will change over the course of the week because there's always new and better stuff coming through- but for a short moment she is there and that makes me happy.

The warm, fuzzy glow from the art challenge has continued as a result and I'm feeling full up with ideas and inspiration! It's ironic after the lack of motivation that I mentioned just recently, but I would guess that most painters and sculptors in our hobby/business would agree that this waxing and waning of inspiration/motivation is a constant companion to us, it is just what you do to manage the highs and lows when they hit.

As a result of this burst of inspiration, I have moved swiftly onto the Clio et Erato piece. I had looked at the comic strip that relates to the girls, and they appear to be living in some kind of post-apocalyptic environment of some kind. With this in mind, I set about building a scene of busted concrete and rusty metal, with lots of overgrown foliage.

BUT! I've not taken any photos of the scene yet! LOL! It's a bit of an unusual thing for me, but I've just let the ideas flow without really pausing for breath. It could turn out great, it could turn out a bit "yeah, but why?", but I'm thoroughly enjoying being in the moment with it - especially when I made a tiny rusty padlock! I'll try and get some shots up very shortly, but I am going to try and complete the base/scenery first, then take some shots before I start painting the girls.

Anyway, if you made it this far, thanks for reading all of this gabbling on. I'll try to make the next post more pic heavy and less wordy.