First of all, people will be thinking "what the hell is he going on about with this End of Season stuff?"

Well, in terms of competitions and such, this is probably true, as the likes of Monte San Savino and the UK Golden Demons, or whatever they are calling them now, are still to come before the end of the year. However, I'm personally done with my quota of shows for the year.
Admittedly, I've not exactly scoured the globe for every show to attend - I've only actually visited Salute and Euro Militaire this year - but work commitments and having a lovely two year old who enjoys spending every waking moment with me at weekends, along with a lot of significant "milestone" birthdays personally and around the family this year means that I've been less "visible" in 2014. I don't know at this stage whether I will attend more shows next year, but I hope to have a few more new pieces of a "level" to be able to take with me wherever I do go. :)

So, typically, now I retreat to my cave, stock up on tea (and beer), and see out the winter while tinkering away on pieces here and there until inspiration strikes for competition pieces. This year though, I have a solid pile of models and ideas that I really do want to work on. There are a few cherries that I want to pop too - like painting a bust and creating an historical vignette. But I also would like to try using oils on a model for the first time too, as I found myself frustrated with the limitations of brush-on acrylics on the drapery of larger models recently - so I'm going to get the last few bits off of my desk, and get building.

I mentioned Euro above, and this year was a really enjoyable year for me on a sociable note. But it was also a much more satisfying year for me as a judge for the competition. Last year was my first year and I ran around like an excitable puppy, missing some of the important stuff around the show where I was so focused on "my" category, and then found that the actual judging process was quite intense because I was fearful of getting it "wrong". This year, I deliberately went nowhere near my category until time for judging. Instead I chose to wander round and get to say hello to as many people as I could. Then, when time for judging came, I looked at my class with fresh eyes and last year's experience under my belt. The standard of entries in the class overall were excellent, with very few not making the cut and getting some kind of merit award - Euro holds a Gold, Silver, Bronze, Highly Commended and Commended merit scale. I was then also more confident this year that I could come back to the hall on the Sunday and chat to any of the entrants that wanted to speak to me about why their pieces scored what they did. This is an enlightening process as much for me as it is the entrants, and will be something that I shall do my best to maintain in years to come.
Honest feedback as much about what we are doing right as doing wrong is invaluable as far as I'm concerned. From it we can gain a different perspective from others who haven't invested the hours and efforts that we have, so it stops us doing too much of the "yeah, but..." stuff if we fall short of the grade.

In this way, I was a lot more philosophical about my own performance in the Fantasy class this year. I was more aware of the standards, and what the judges would consider. The devil in me made me try out two completely different models to test my theory, but I got the result that I expected.

Ainariel picked up a Commended badge, which in the circumstances was about right. I knew that there were certain aspects - like the skin - which would really need more contrast to pull the judges' eyes. I was extremely mindful of NOT going too heavy with the skin contrast, as this often makes female sculpts look "old" and a bit weather beaten, but the hall at Folkestone can be very bright indeed, and so bleach out the shade tones. The other main issue was a mistake repeated by many acrylic painters at the show, and this was a problem of "specularity" - basically things that were too shiny where they should have been more matt, and vice versa.
Essentially, I should have got a bit more matt medium into my paint and a bit more matt varnish onto the parts of the model that needed it - mostly her cloak. I'd taken the time to paint texture and patterning, but not enough time making sure that it would be seen! Photography of the model doesn't "lie", but polarised lenses and a static lamp position make this less of an issue compared to when a model is in hand.
So, in reflection (pun intended), Ainariel got what she deserved on the day. That said, I do consider her finished, and I am pleased with her as a first real go at a Fantasy model at this scale. She was also my first attempt at painting a Joaquin Palacios sculpt. I very much doubt that she will be my last.

These are the final shots that I took of Ainariel though, and you can see her in my Putty & Paint gallery along with my Coolminiornot gallery (links below) 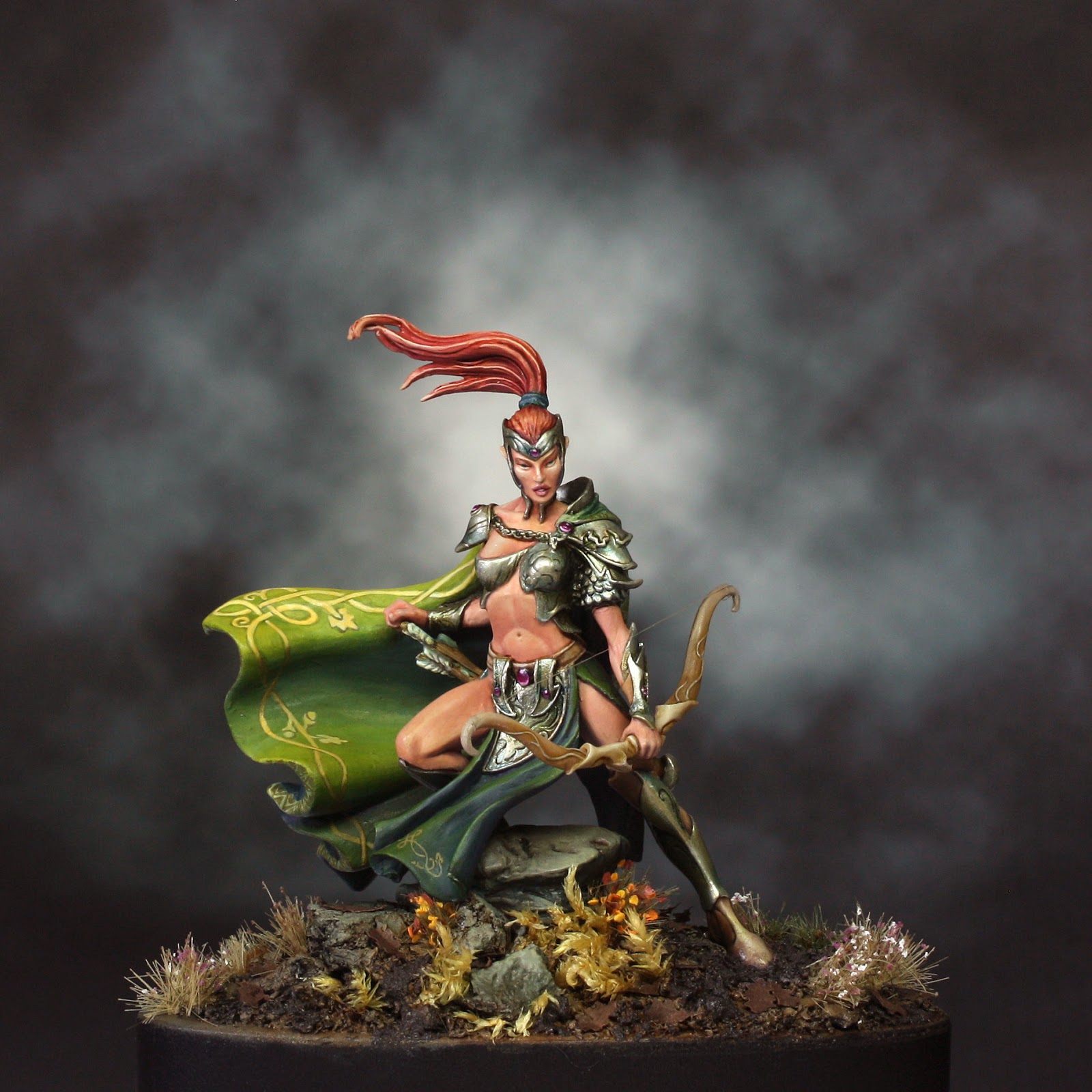 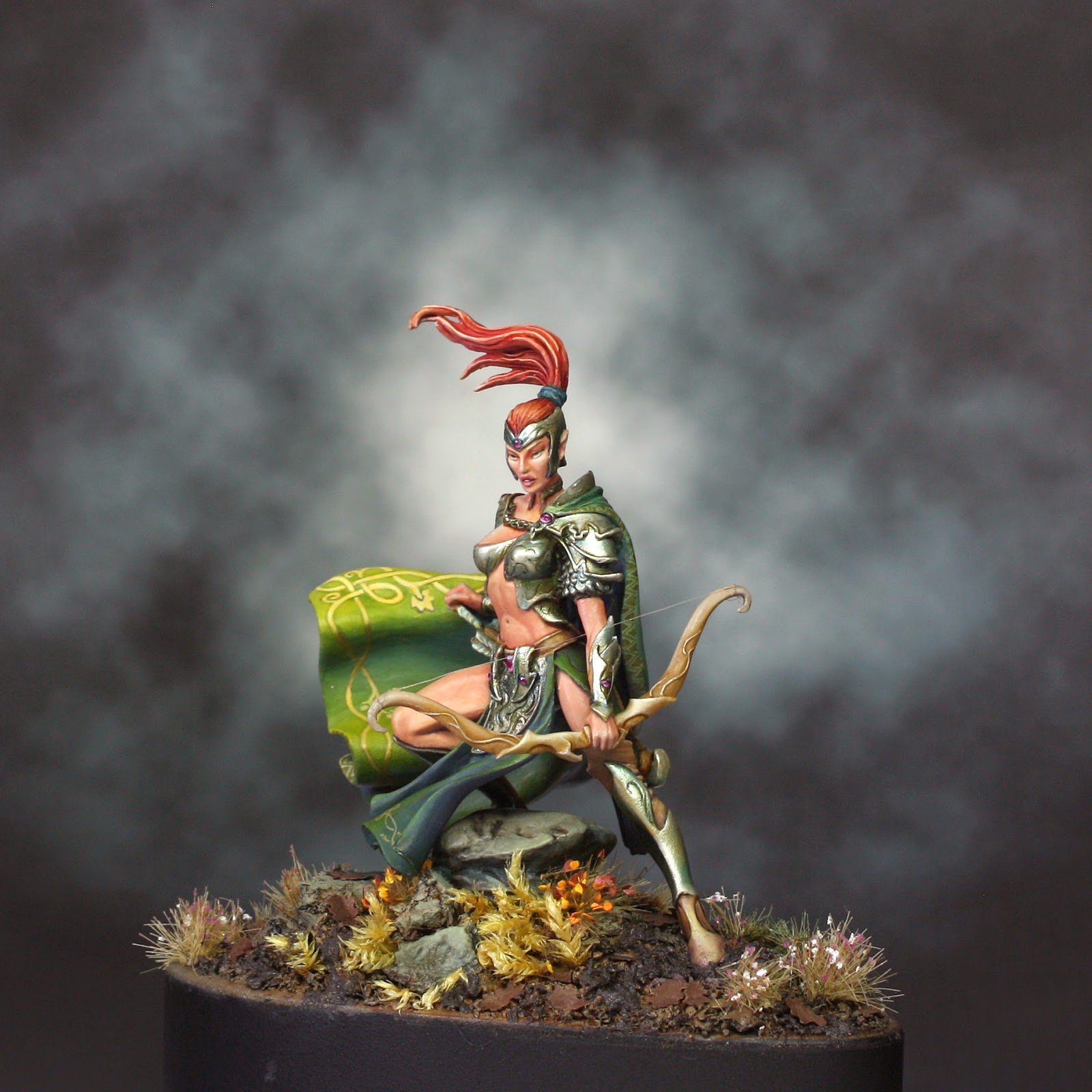 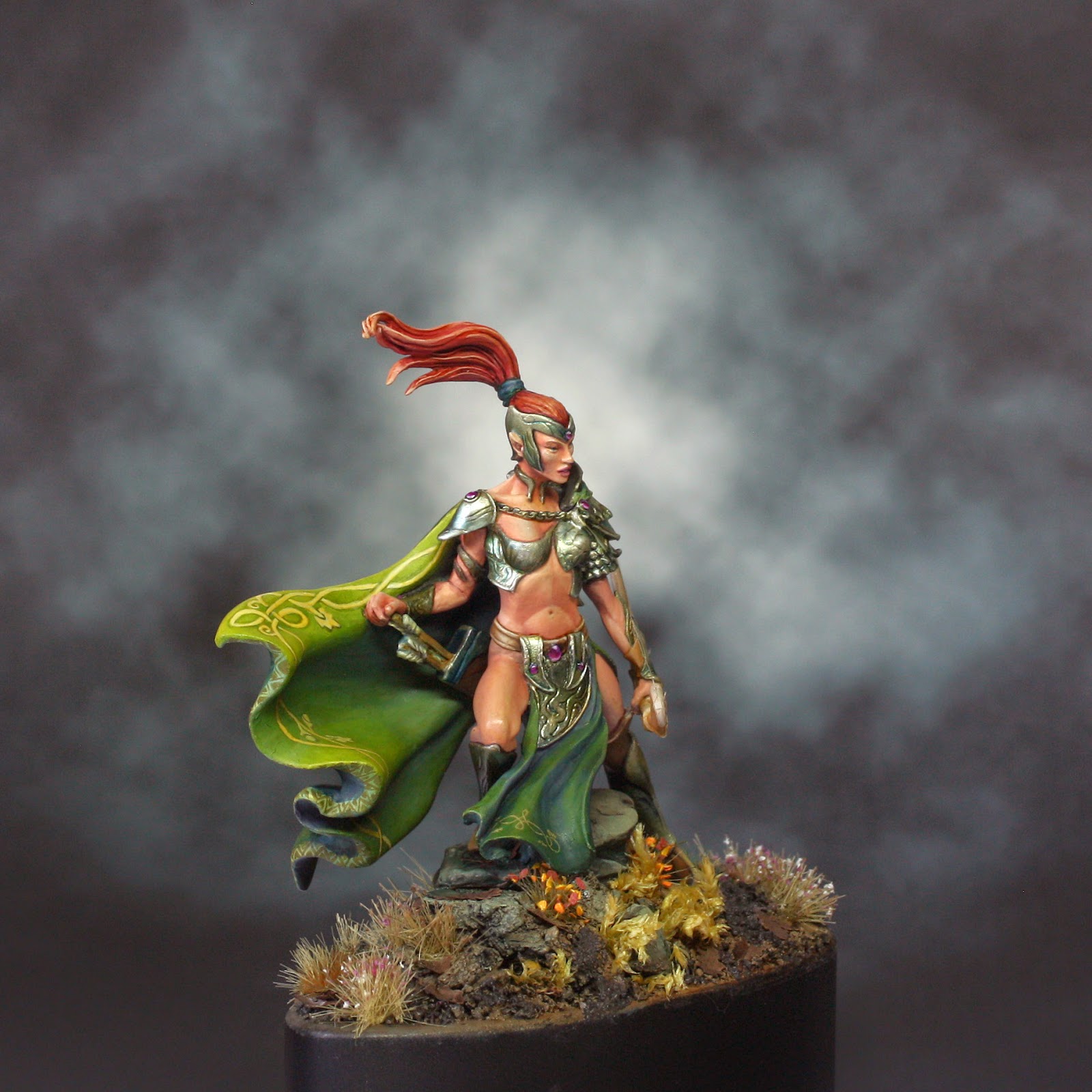 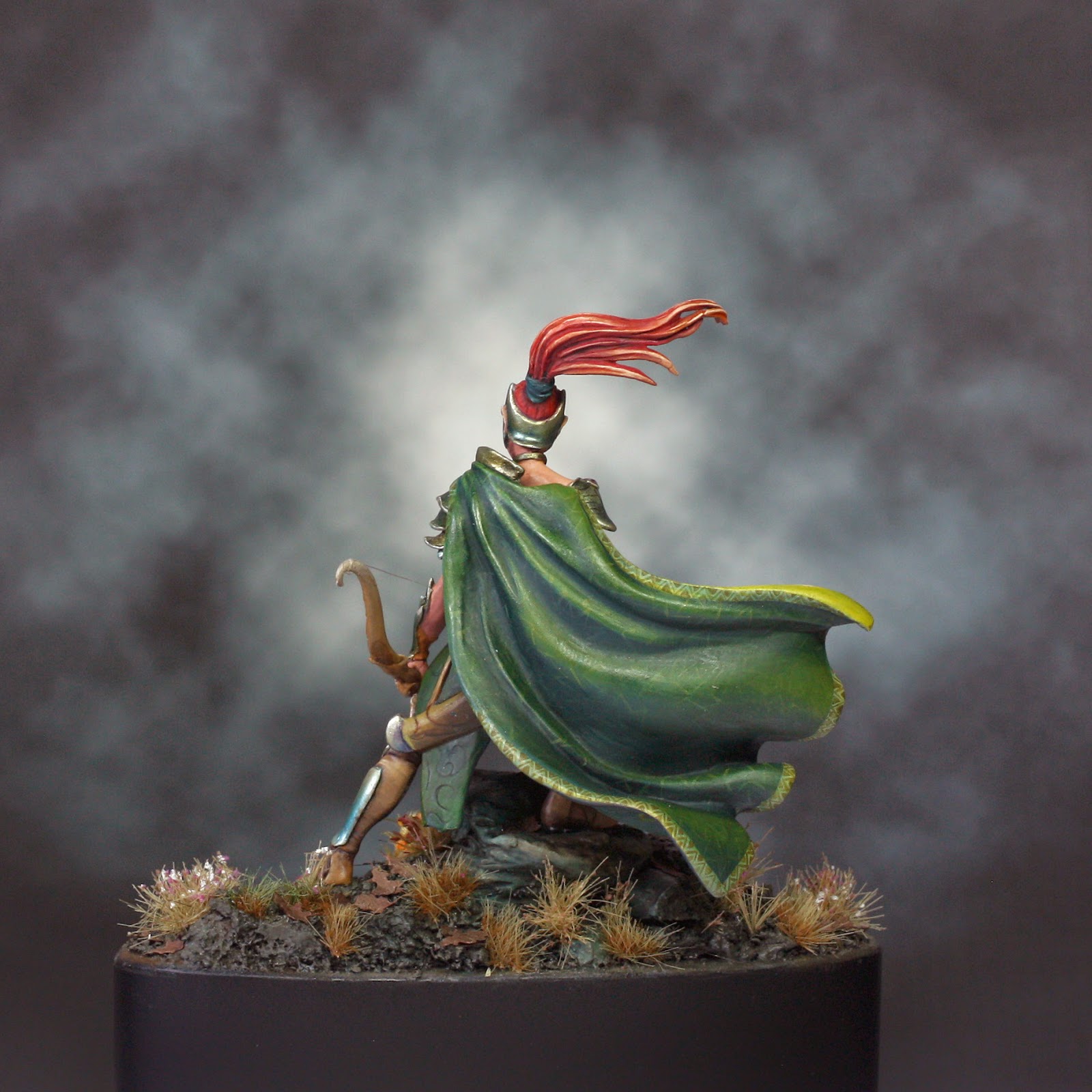 Here are the gallery/voting links - CMON and PUTTY & PAINT

The other piece that I entered for Euro was Cassandra, the Greek-esque cyborg girl that I painted several months ago. She didn't really get a look in. I wasn't surprised as she's mostly naked, which doesn't sit with the judging rules at Euro, and the coloured non-metallic metal style is often not favoured by the judge of this category. 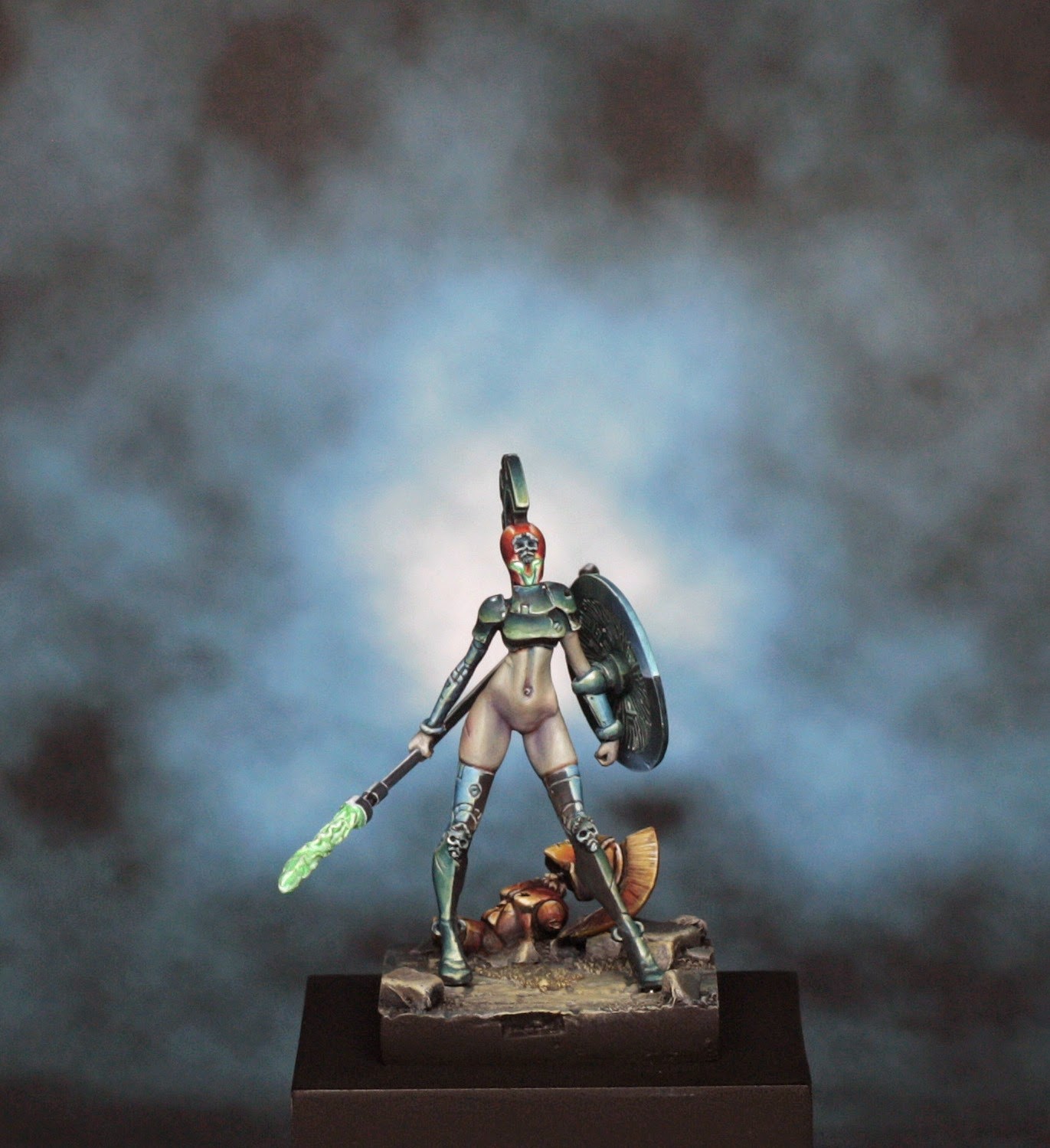 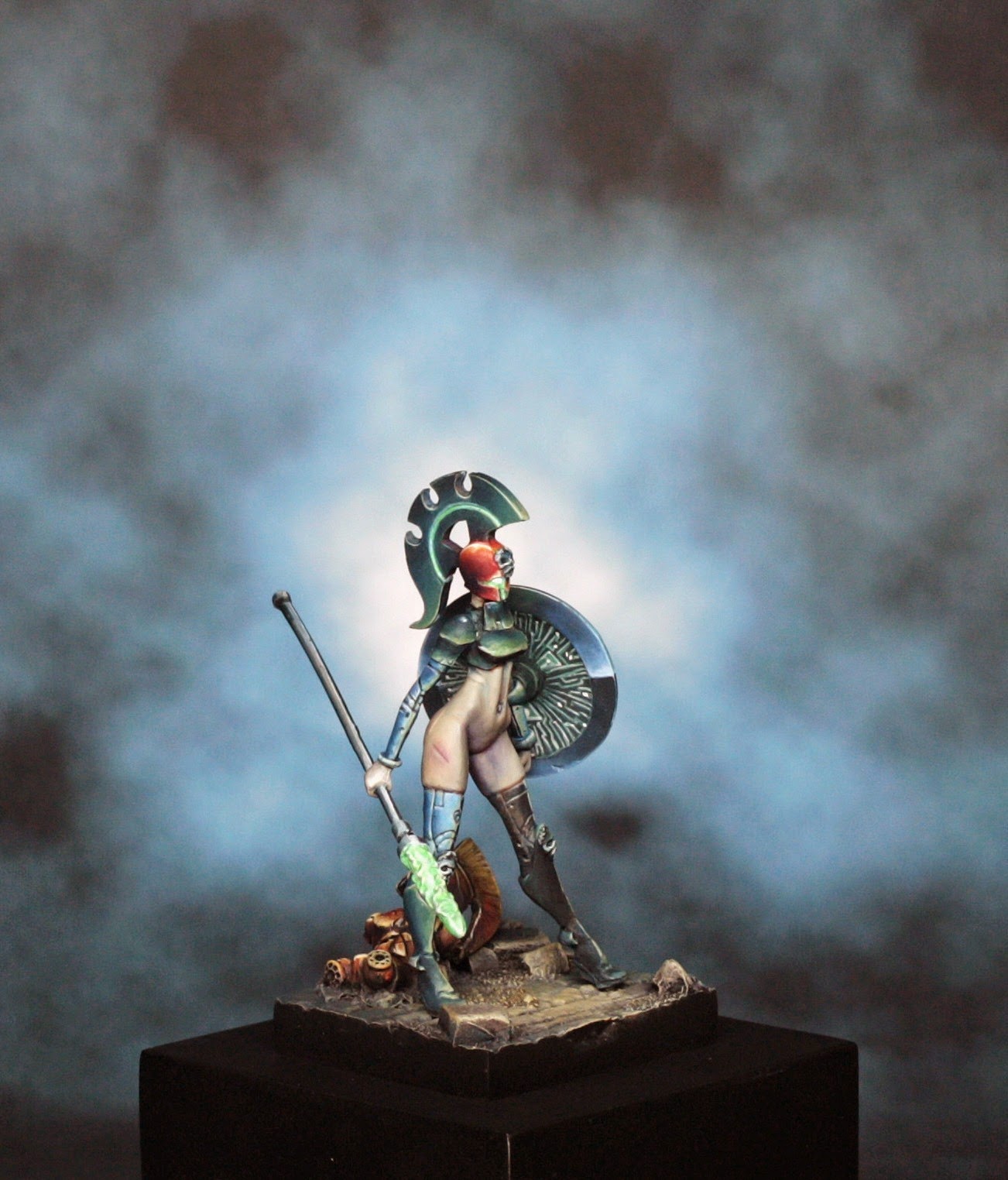 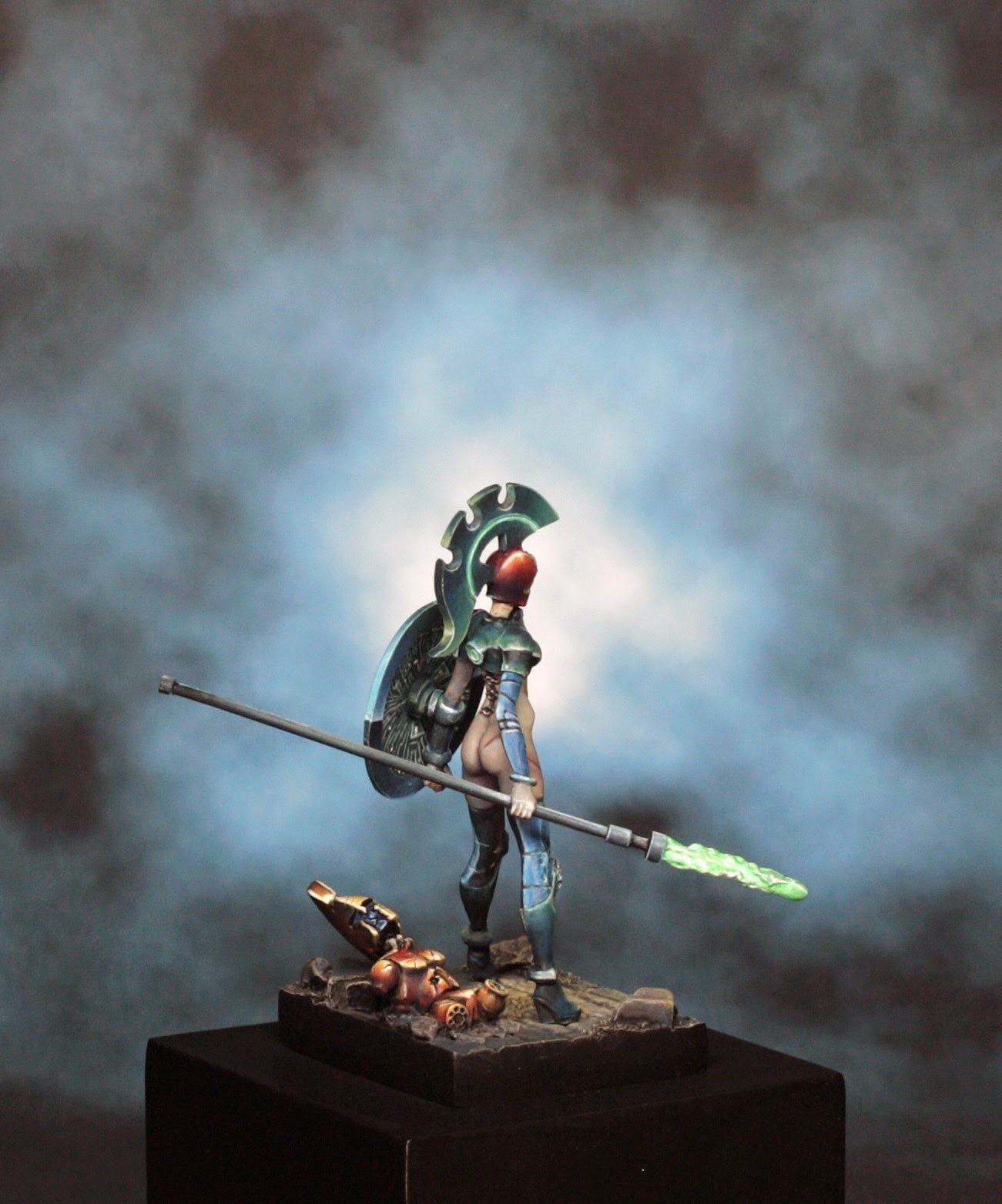 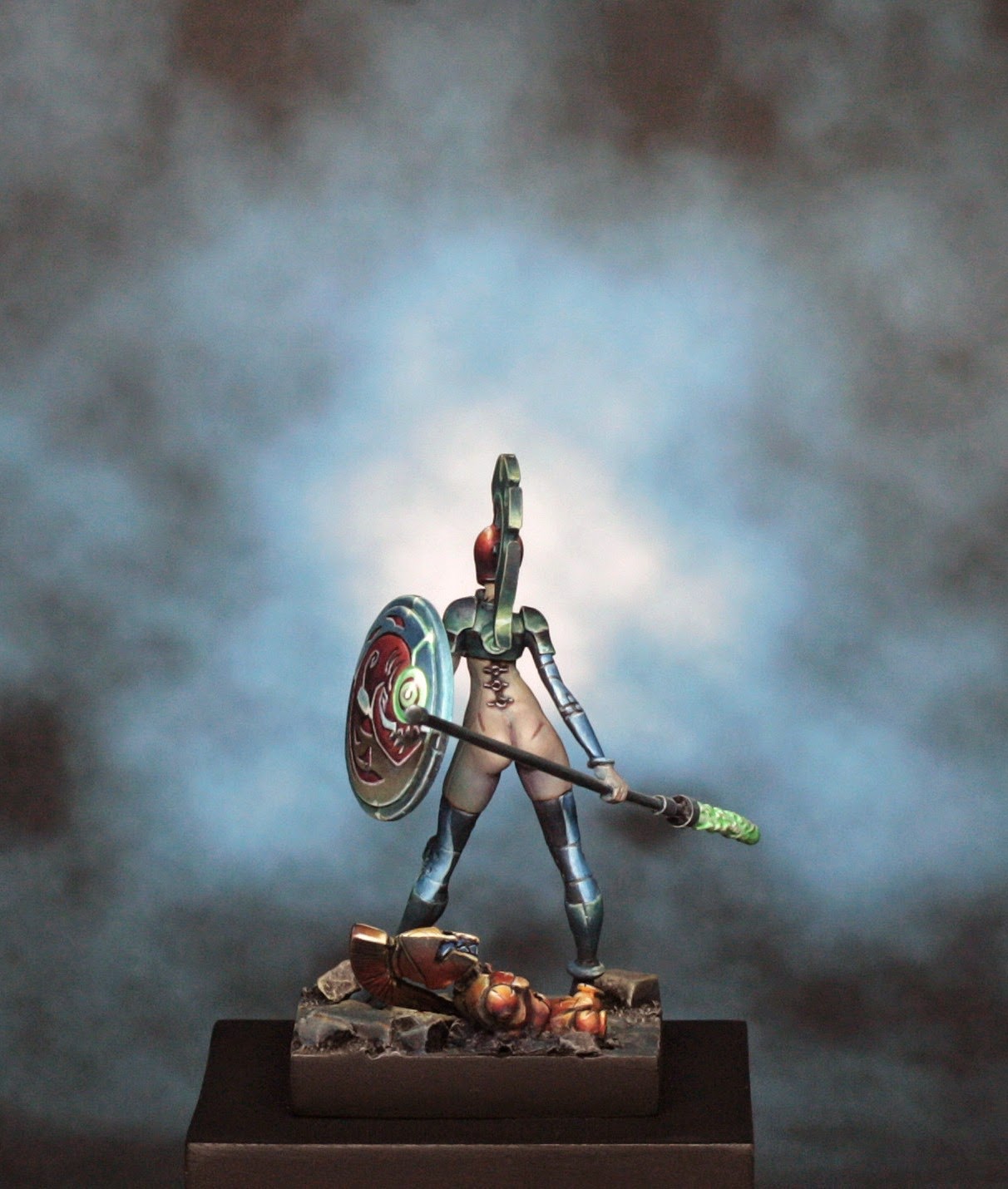 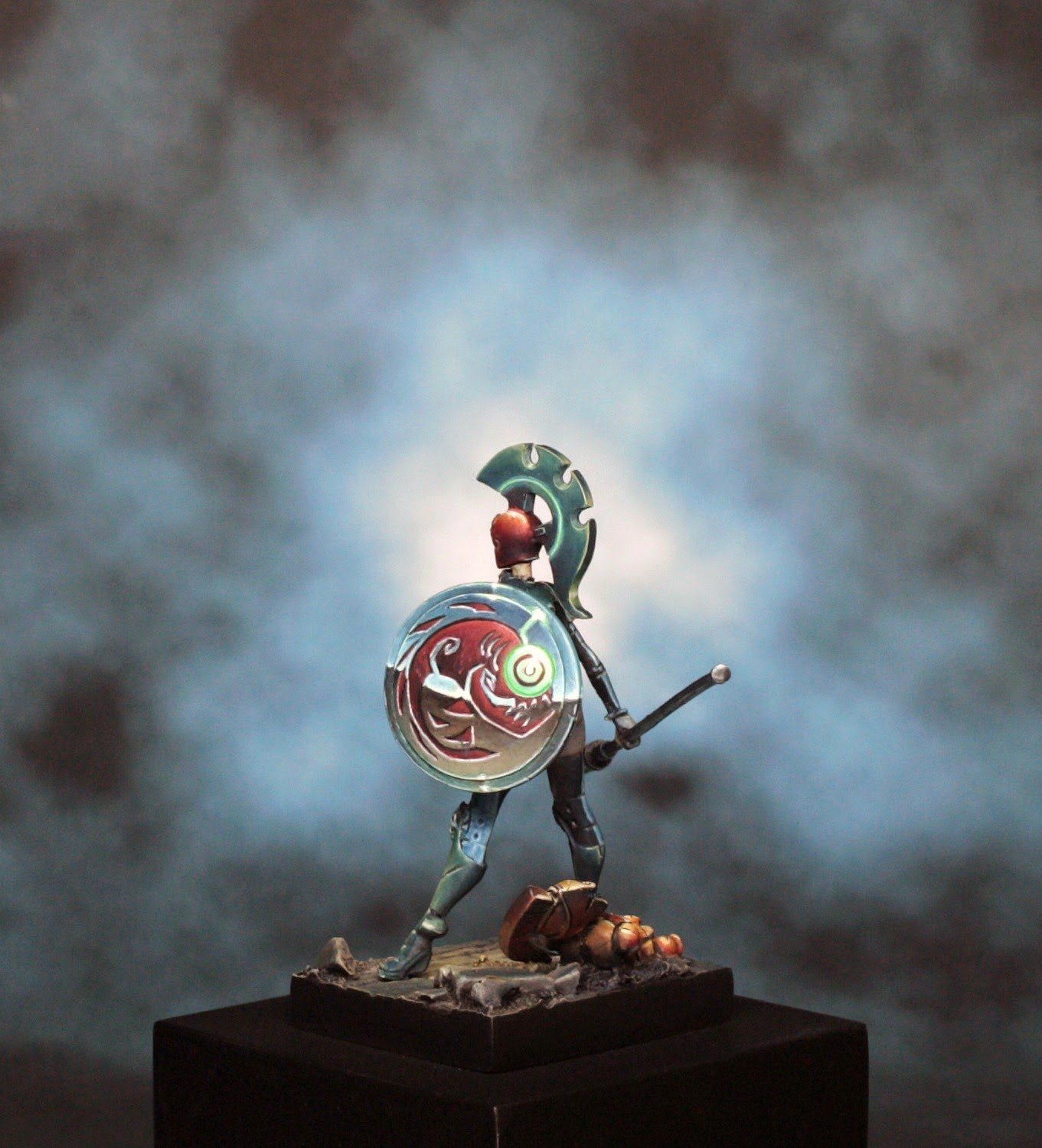 Moving on and not wishing for the grass to grow under me, I've popped out a quickie and I'm nearly finished with an oldie that has been hanging around for too long!

I had the Rihanna song "Diamonds" as an earworm going round my head lately. Dunno why, but it was there. I then had an idea for a mini that I knew was in the pile. Half a dozen hours later, this was the result... 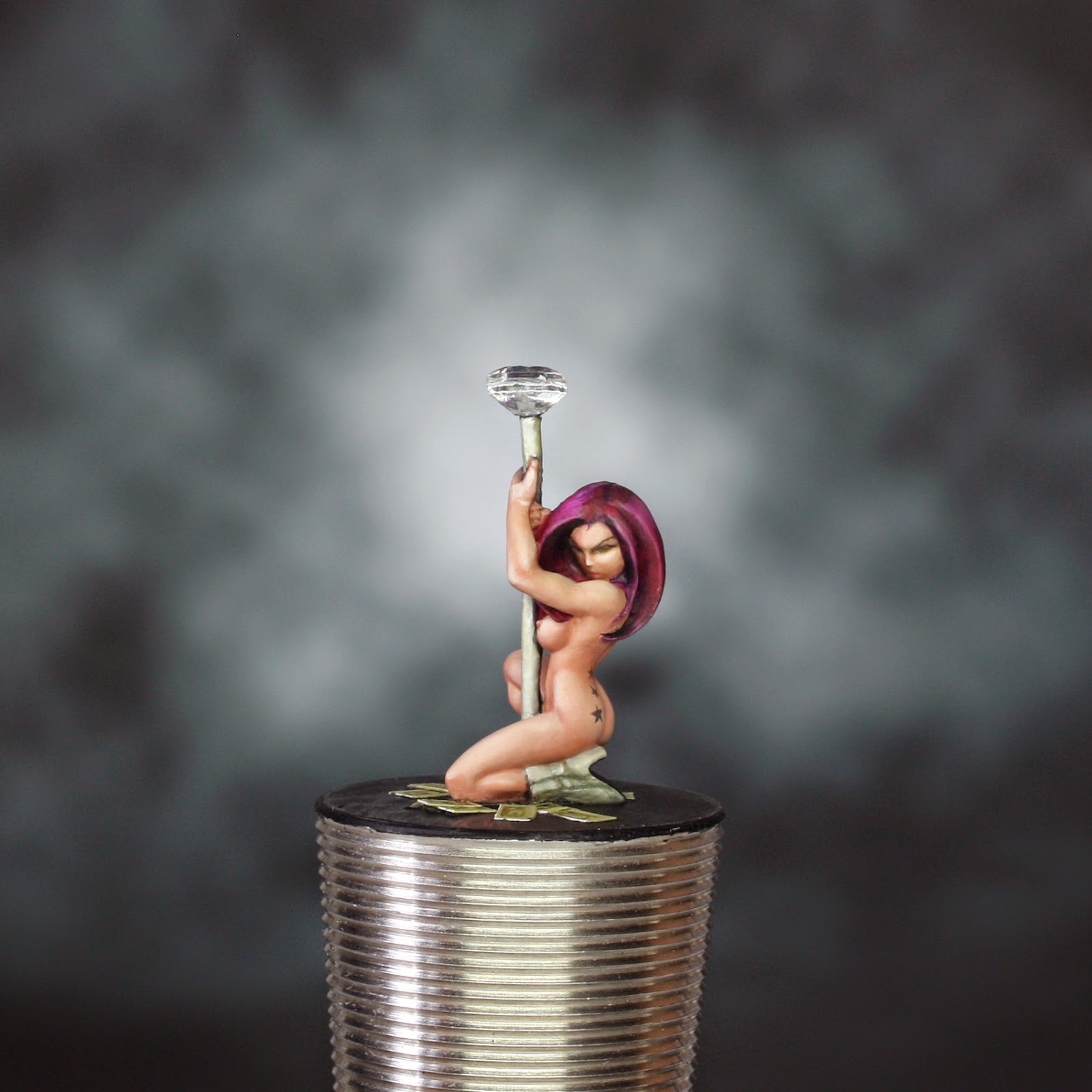 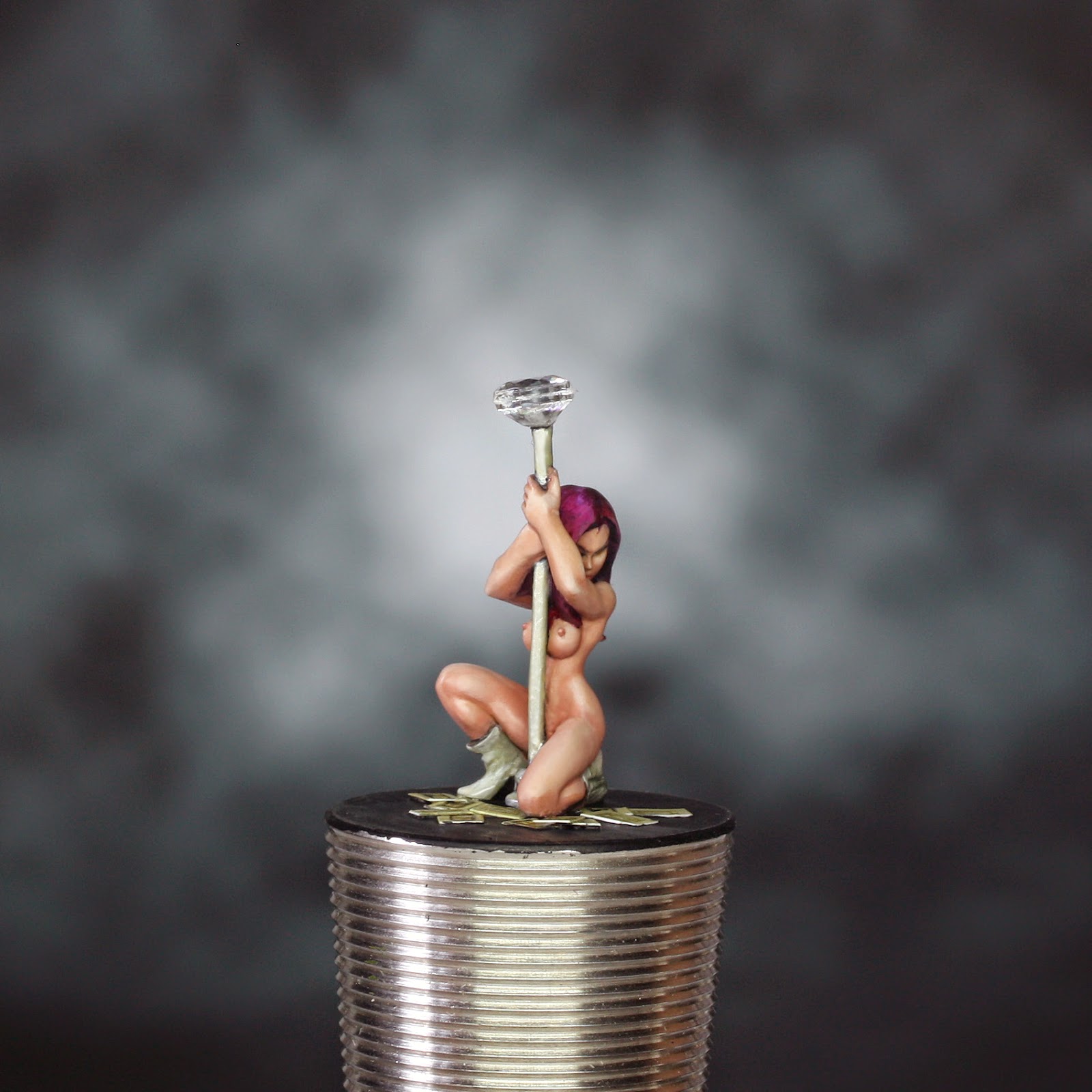 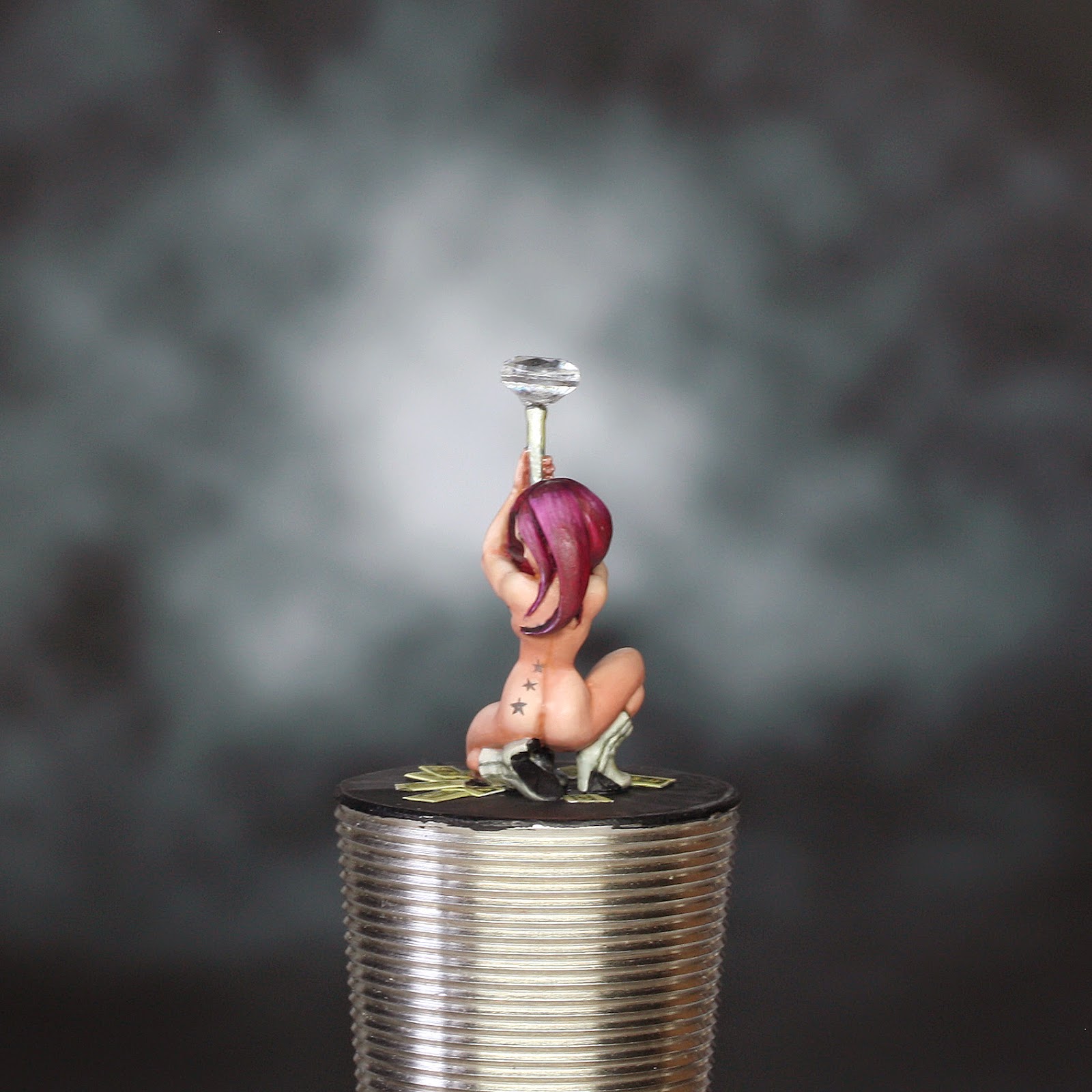 She is Hasslefree's harem dancer, and she is tiny, at around 22mm high to the top of her pole! The stand she is on is a lid to a Paul Smith perfume bottle too. :)
She was a great fun piece to do pretty much while I waited for some paint and varnish to dry, with the actual painting part taking around 5 hours.

She can also be found in my Coolmini gallery - HERE

The oldie is the Painting Buddha vignette. I've pretty much done this except for possibly adding a little greenery to the scene, and maybe either glossing the visor of the girl, or repainting it in a reflective style. To be honest, I want to draw a line under the piece, so it may well be a gloss and go situation, but the overall scene feels about right now and the scene might end up being called " ^_^ " seeing as there are actually 3 of them in the scene - the visor, graffiti and also, barely visibly, inscribed to her gun... 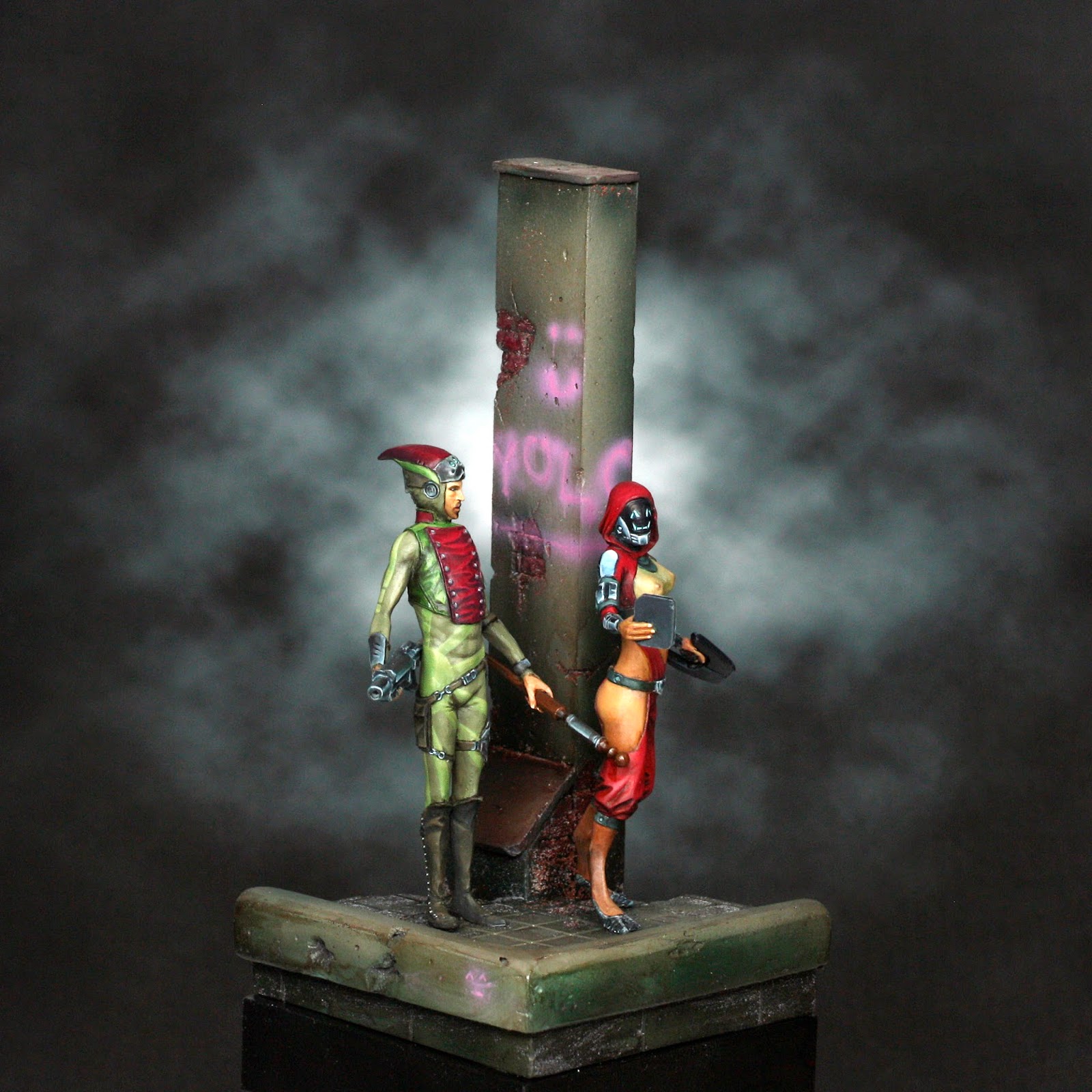 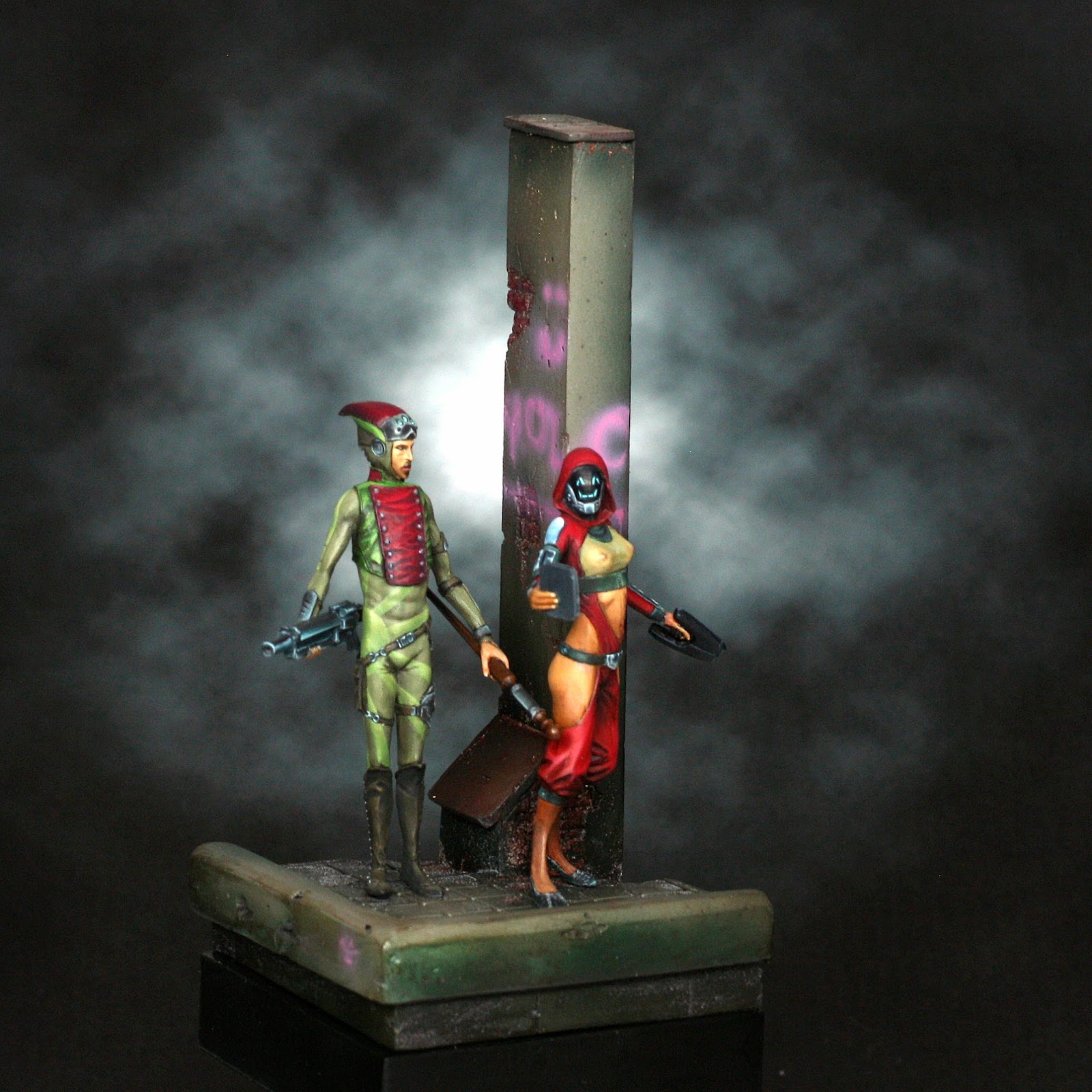 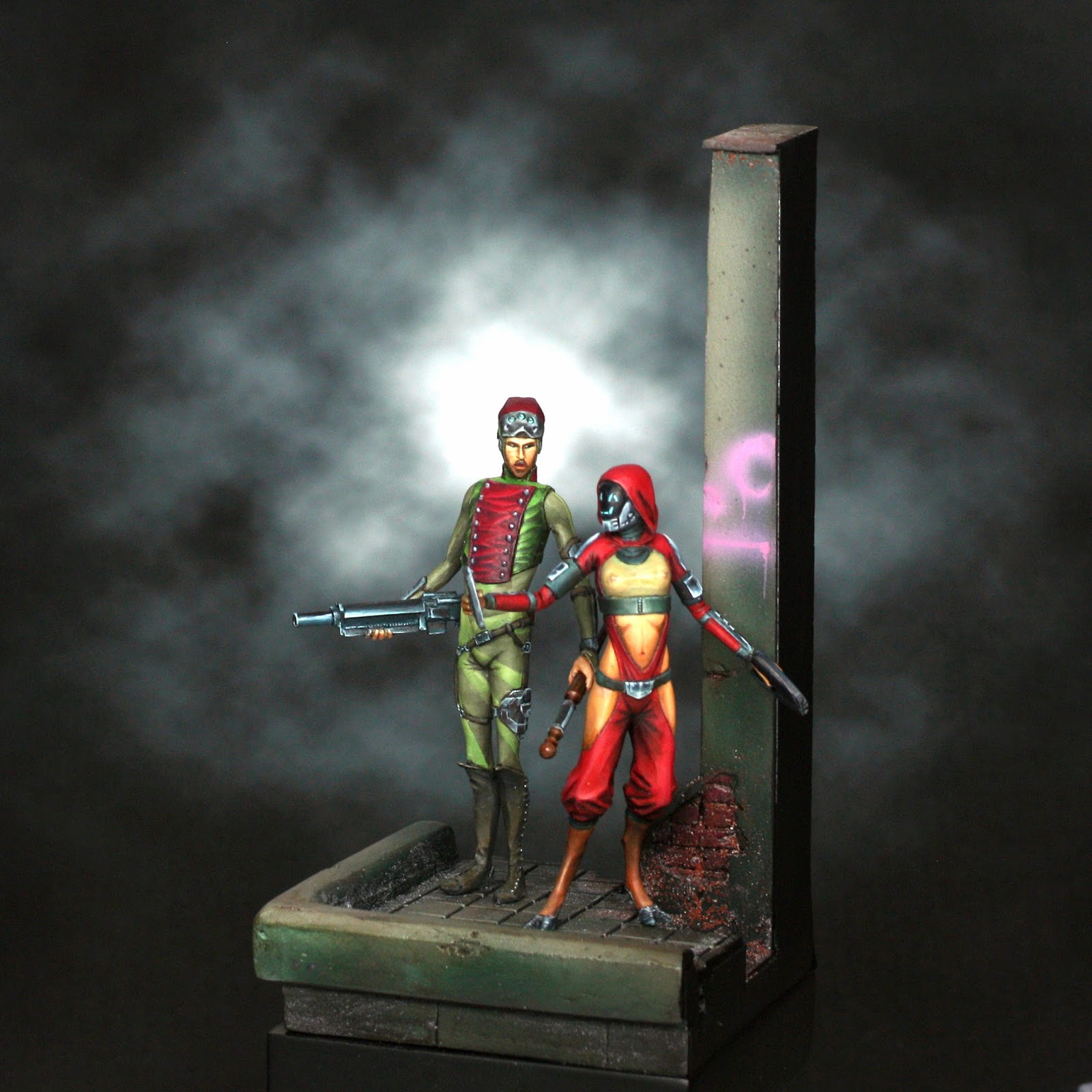 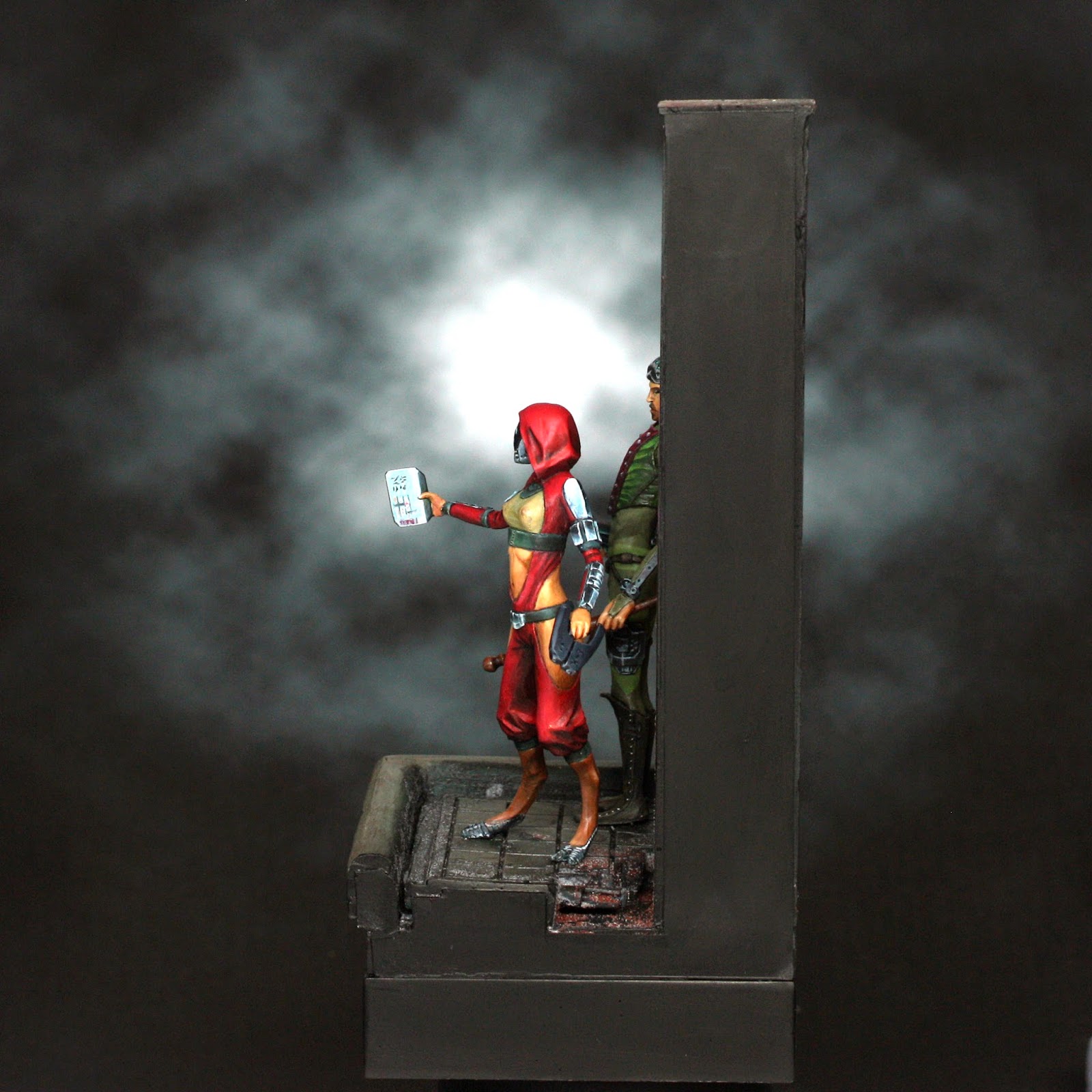 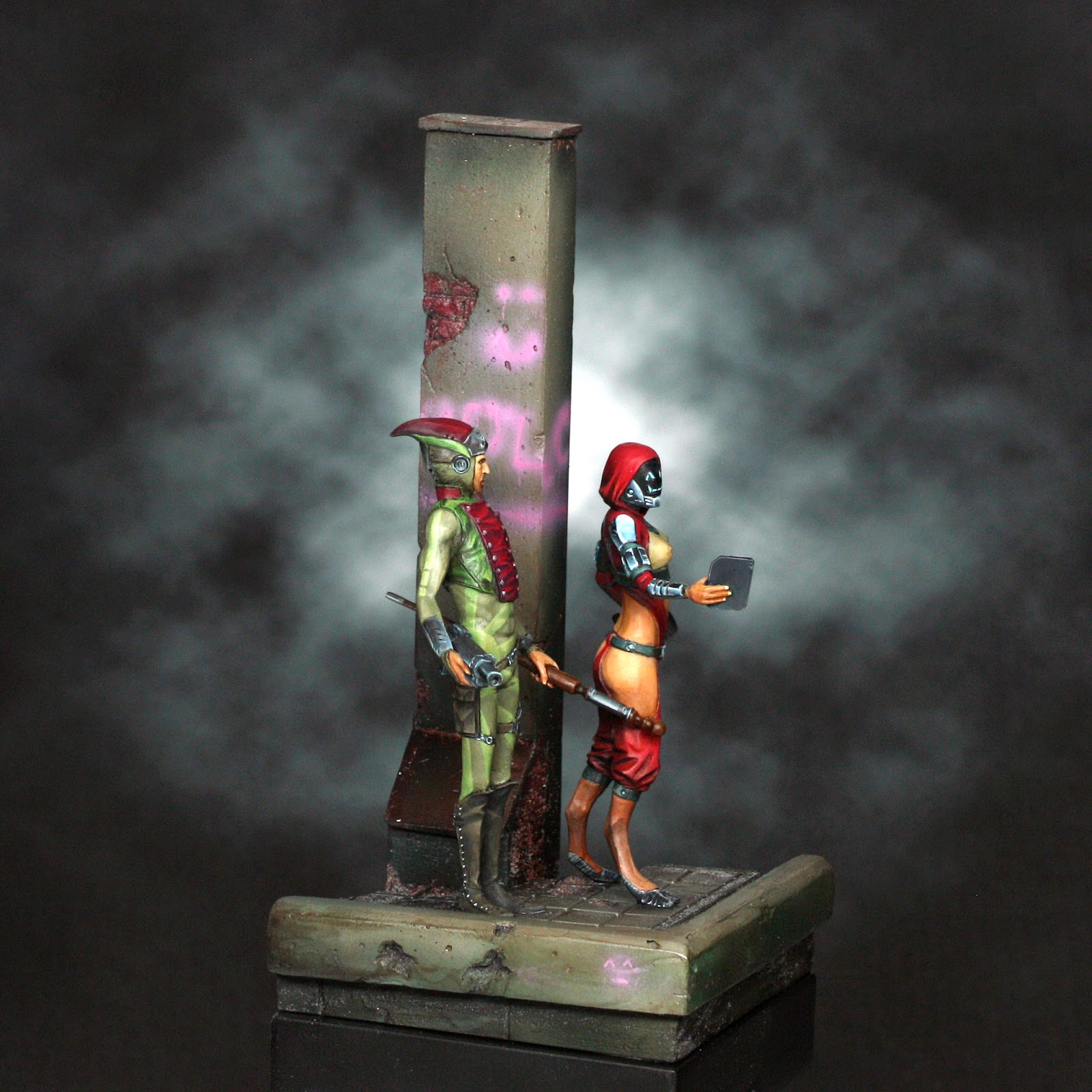 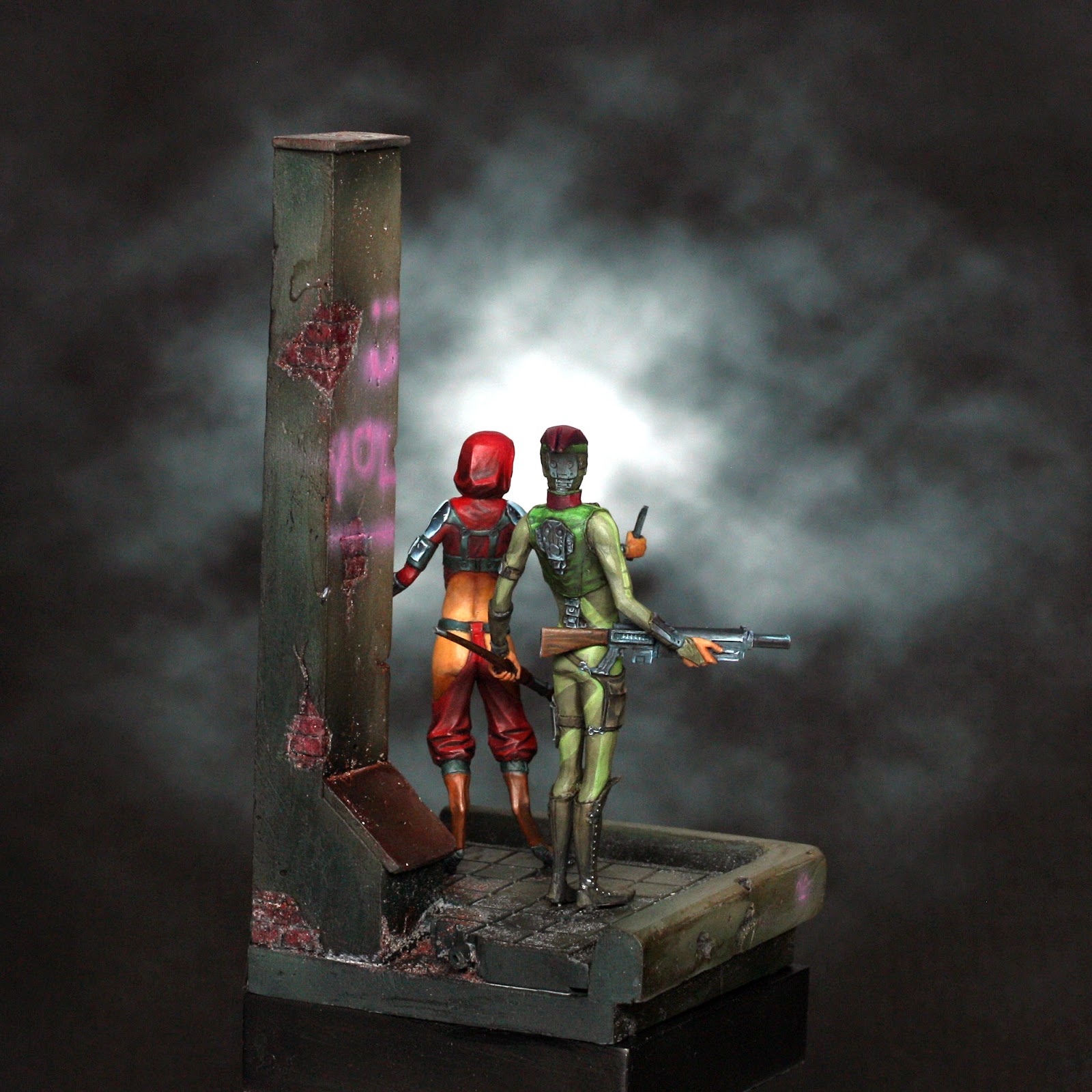 So, this brings a quite a long episode to an end. Currently I have 3 pieces primed that will get painted before I move onto the next batch of ideas. They will all be "fun" pieces too (although all pieces should be classed as fun, really!), and then it will be time for some "bigger" ideas again.