Well, it's been a few weeks - 6 I think! - since I last posted here. I've been pretty busy with mini-updates on Facebook, mostly showing the progress on the Kingdom Death diorama that I was working on. I was also showing the progress of my own Kingdom Death:Monster character pieces which I have been working on in between commissions - just quick tabletop stuff - and I squeezed out a Hasslefree Xmas special for fun too. I had hoped to get a couple more seasonal minis done, but the diorama was the priority as it was a commission piece.

In the mean time the Facebook following passed 1000 "likes", which is just awesome! It's been 2 years almost to the day since I first started this blog up and the audience just seems to keep growing and growing. I'm amazed that so many worldwide are checking up on me and my toys! lol :)

I held a competition/giveaway when the blog reached 500 likes, so I think that I shall run another as a thank you for reaching 1000. Check out lower down what I have in mind and what I propose as a prize.

So, as a recap, this is what I've got done since the last post...

Like I said, I've been doing these in between commissions, or as little colour or texture studies - I am getting more into working textures into my paint jobs now. It's quite a nice challenge at this scale to make it believable too. So, so far I have completed two of the starting survivors - Allister & Zachary - who have each had no more than about 5 hours total paint time... 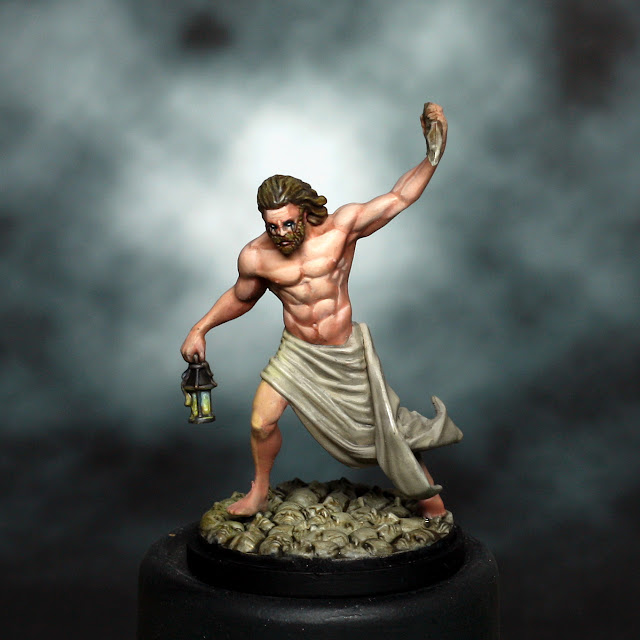 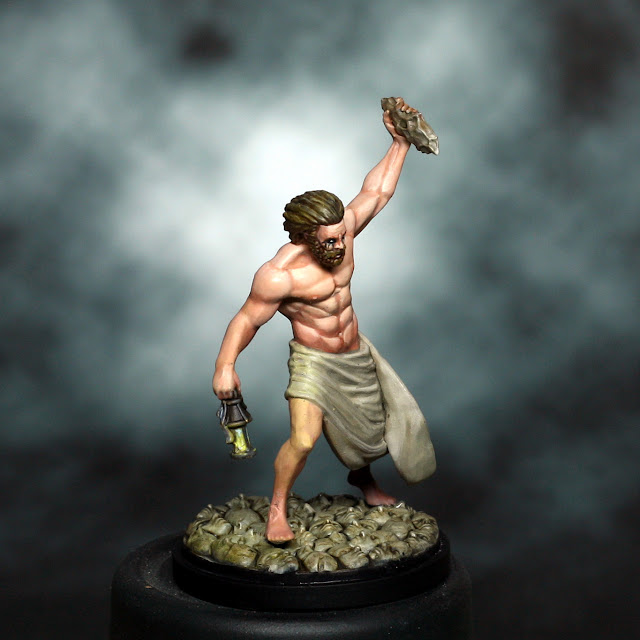 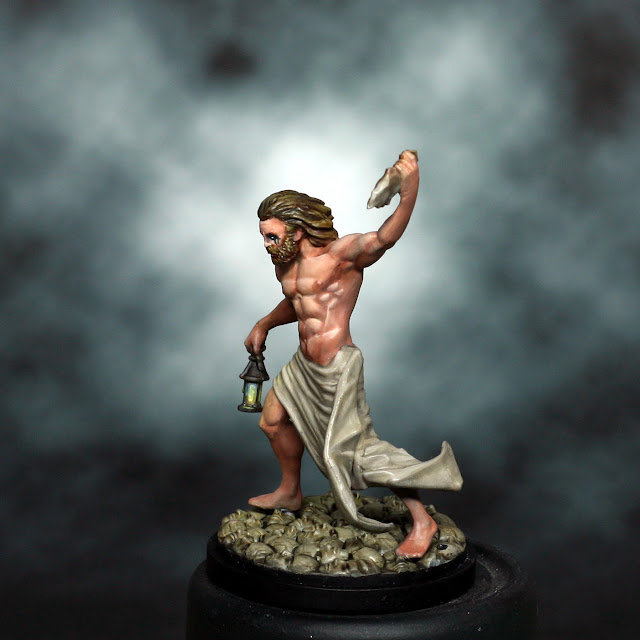 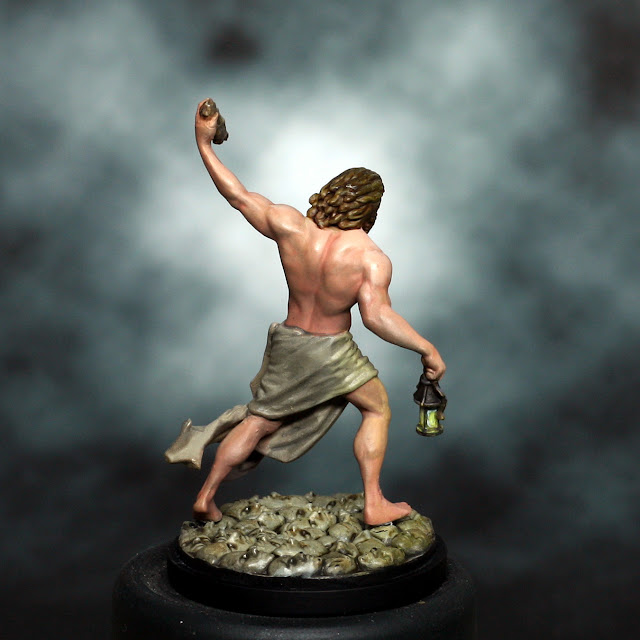 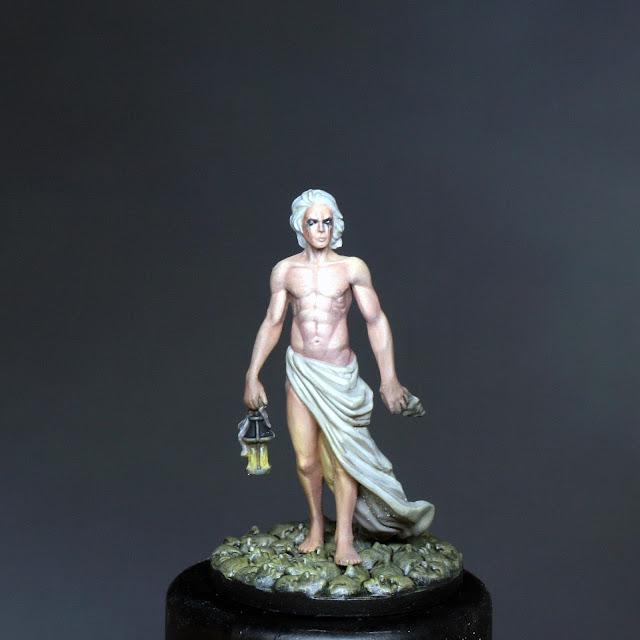 Then I have done the White Lion and the Butcher, which are the first two adversaries that you are likely to face in the game... 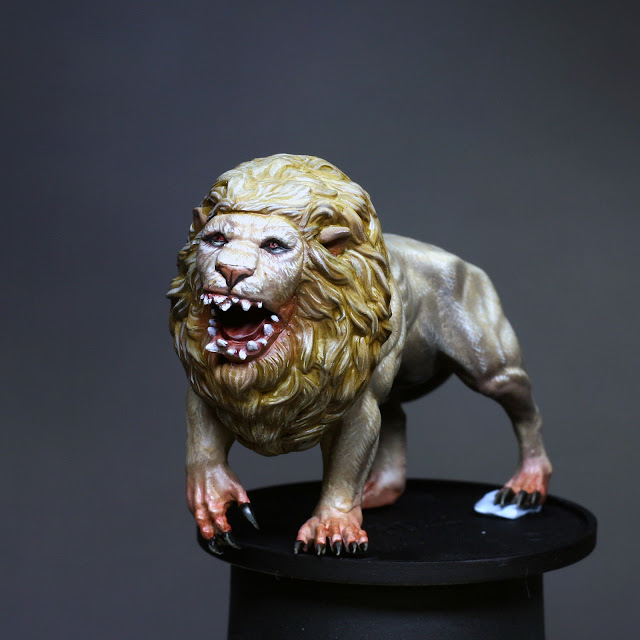 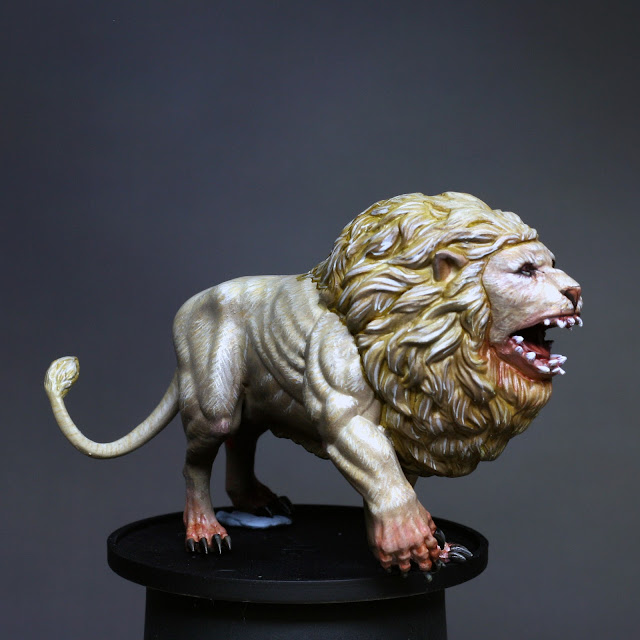 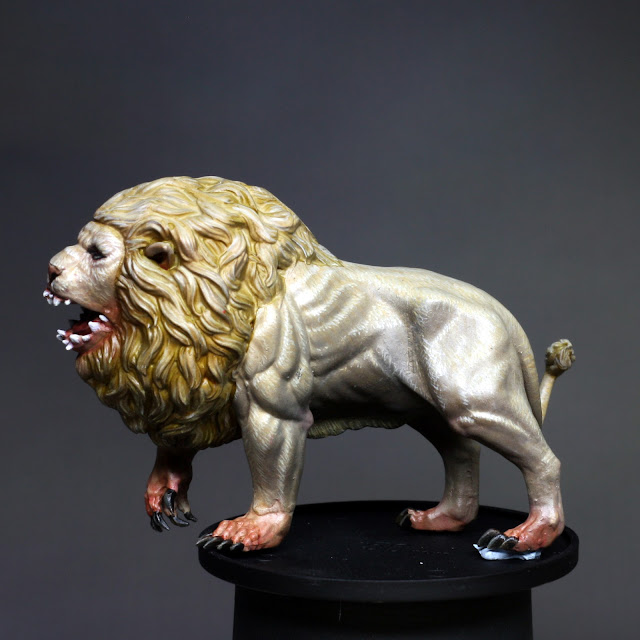 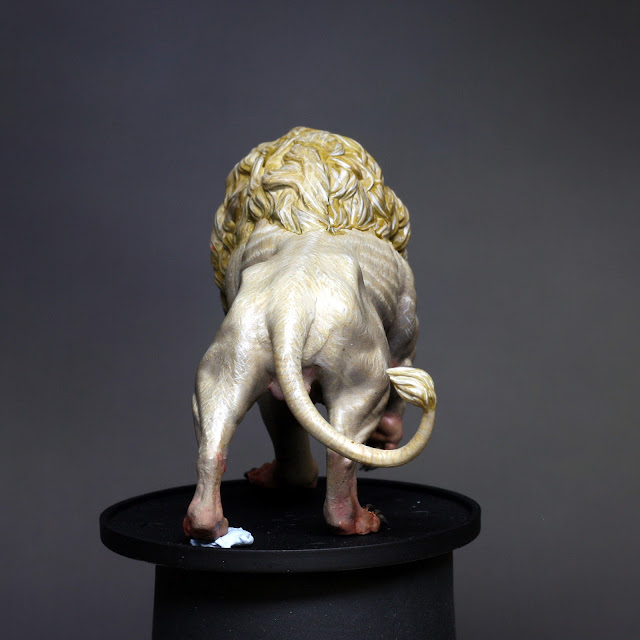 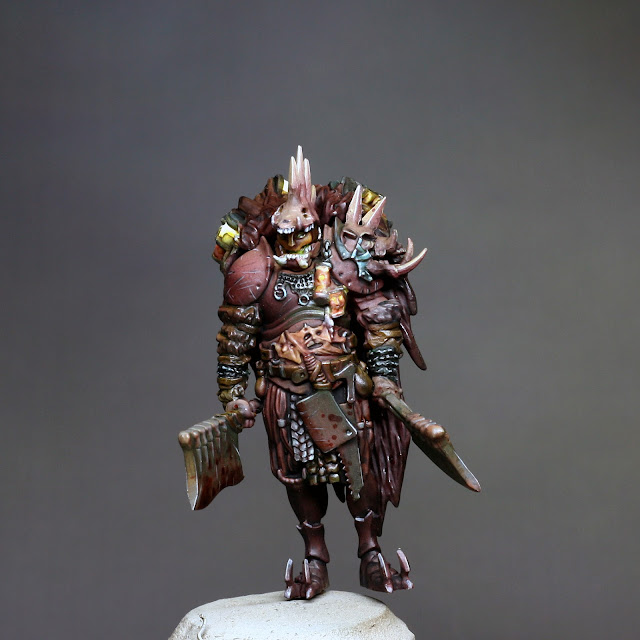 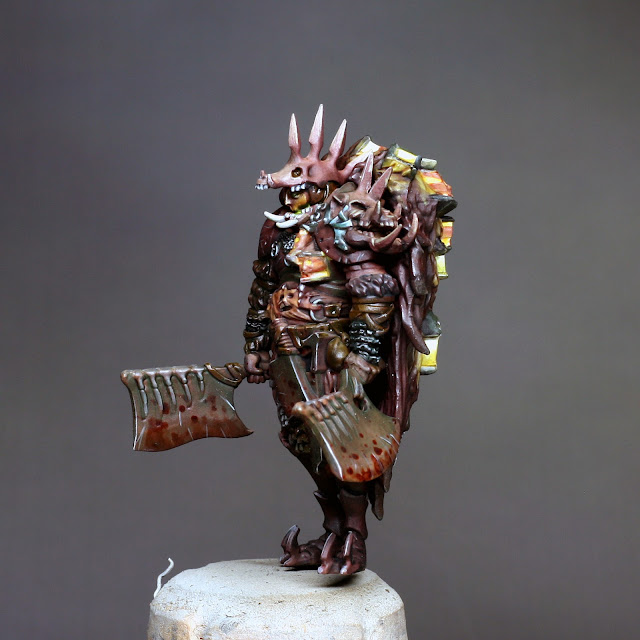 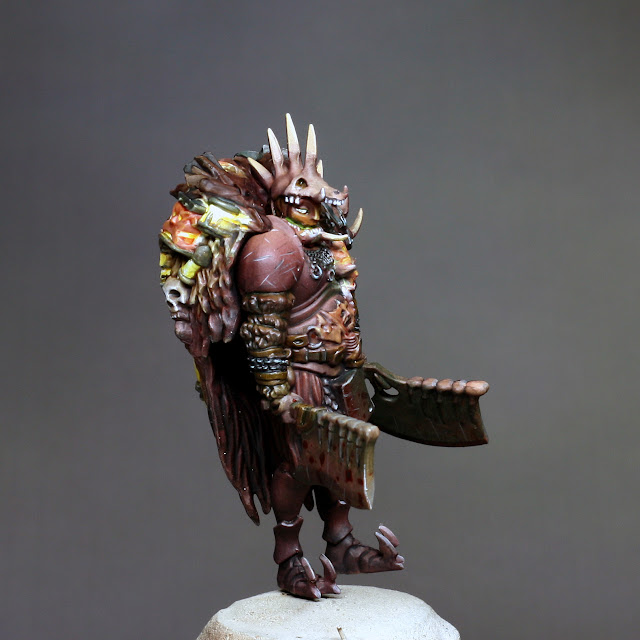 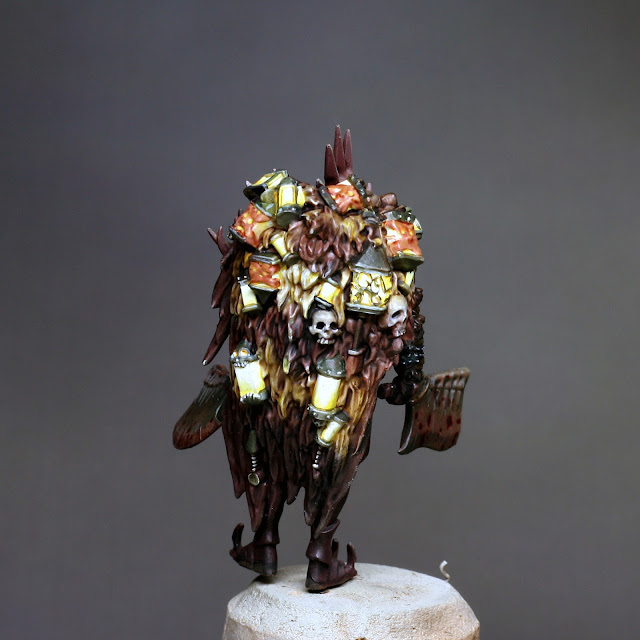 The lion was great fun working in that fur effect. You can kind of cheat with the blending by first airbrushing on a rough light and shade, then "scratching" on hundreds of tiny fur lines with a brush in ever lighter colours from a khaki tan start up to pure ivory.
The Butcher was more conventional painting, though I airbrushed in the reddish base colour to the majority of the model.
Both of these also had about 5 hours total paint time too. I've yet to decide what to do for basing on these two. I'm not sure whether or not to press mould something like the base from the Lion Knight (more on Lion Knights later in this post!), or just airbrush on a skull stencil. Whatever I do, I shall try to follow that through with the rest of the monsters - though the Phoenix may need something more substantial... 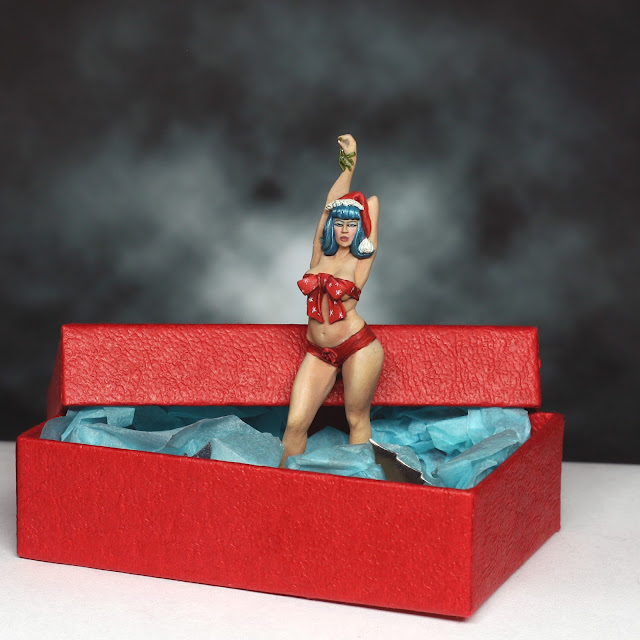 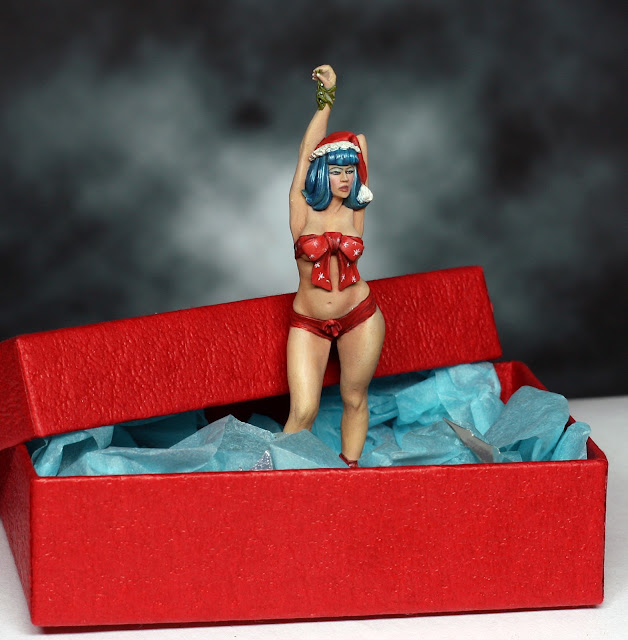 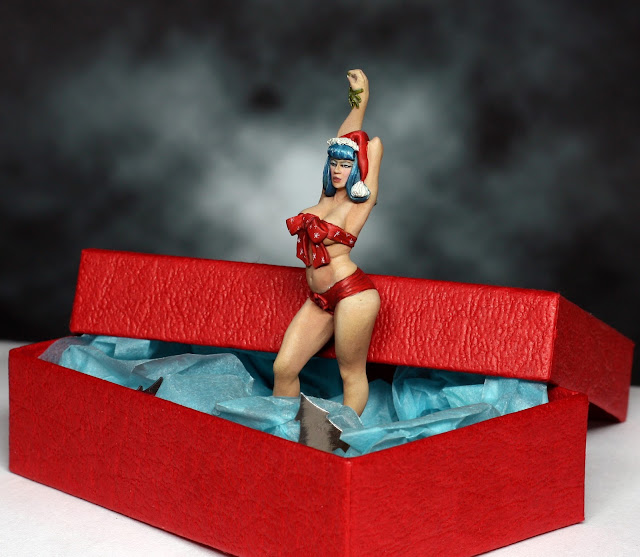 I've had this mini for a couple of years and felt she was long overdue a paint job. The unboxing idea just made perfect sense to me too and solved a potentially tricky basing dilemma. Again, she was a very quick and simple paint job, purely for the fun of it. So often I reach for a Hasslefree mini when I just want to have fun. It is the relatively uncluttered style that Kev gets into most of his sculpts that allow you to do as much or as little as you want, but the model will still look great. I have loads of them in the cabinet where I've just had an idea in my head and then rocked it out in a single session. 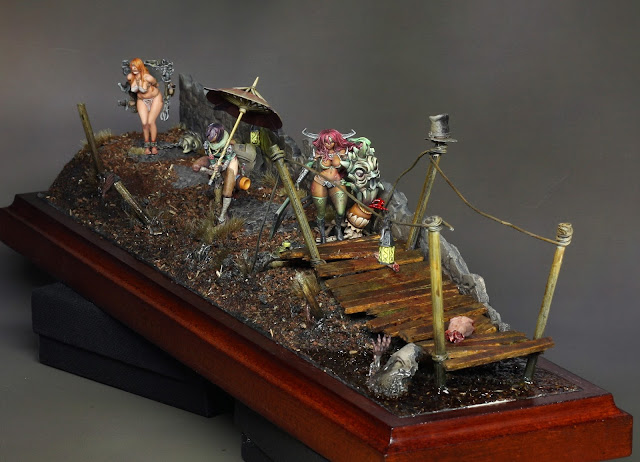 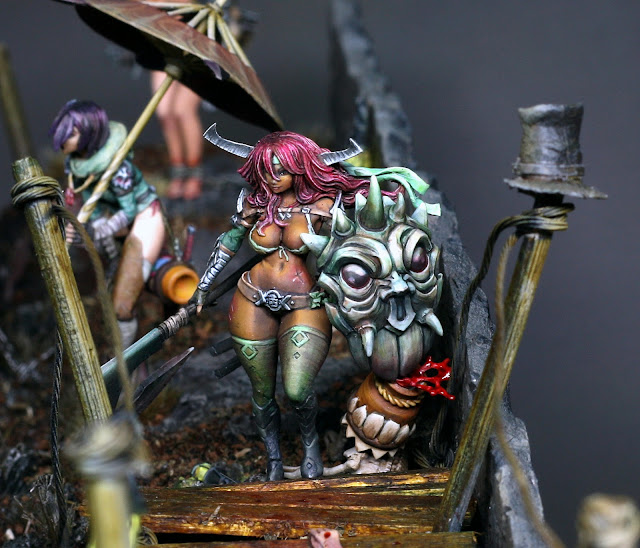 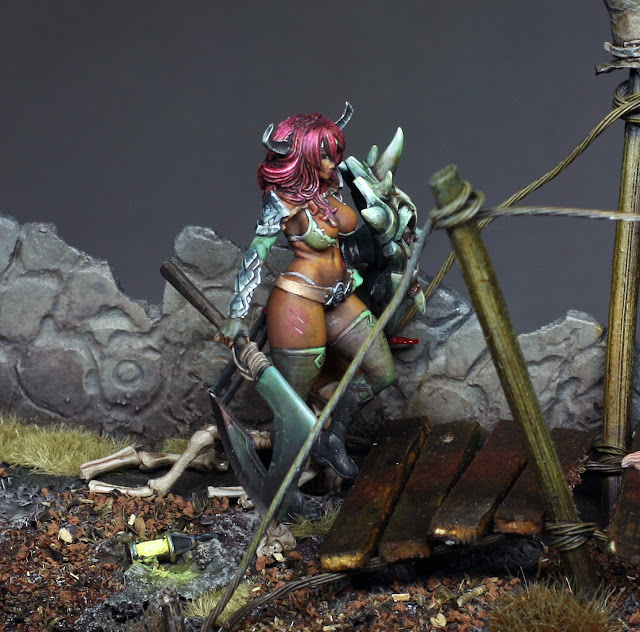 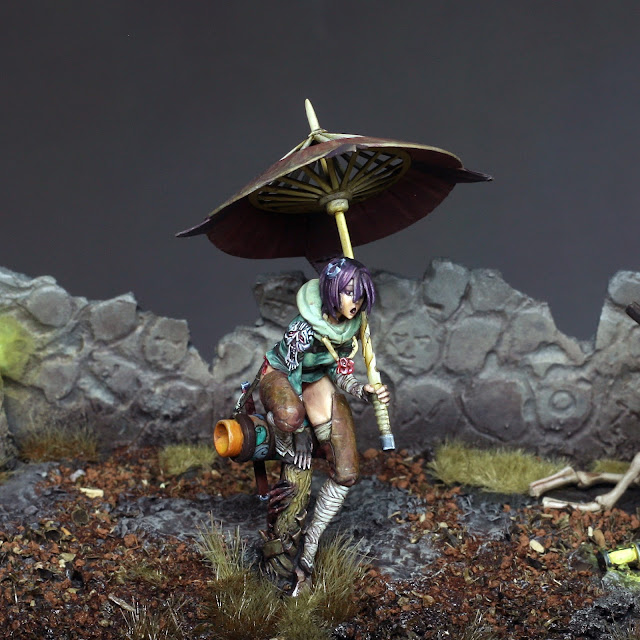 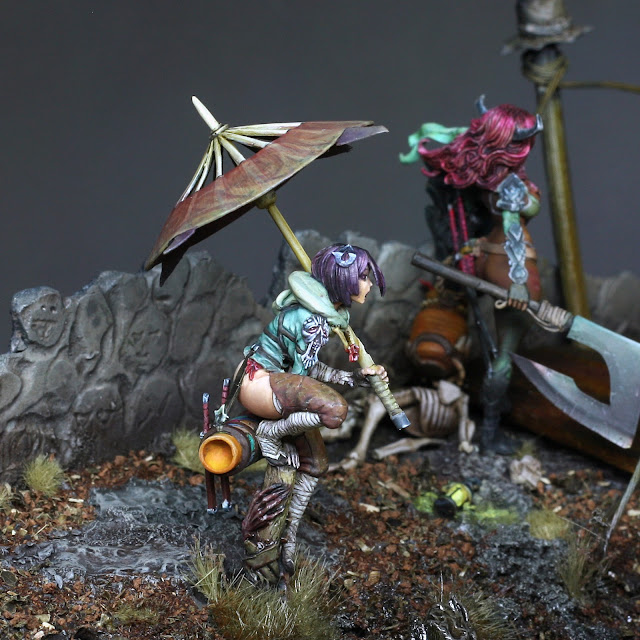 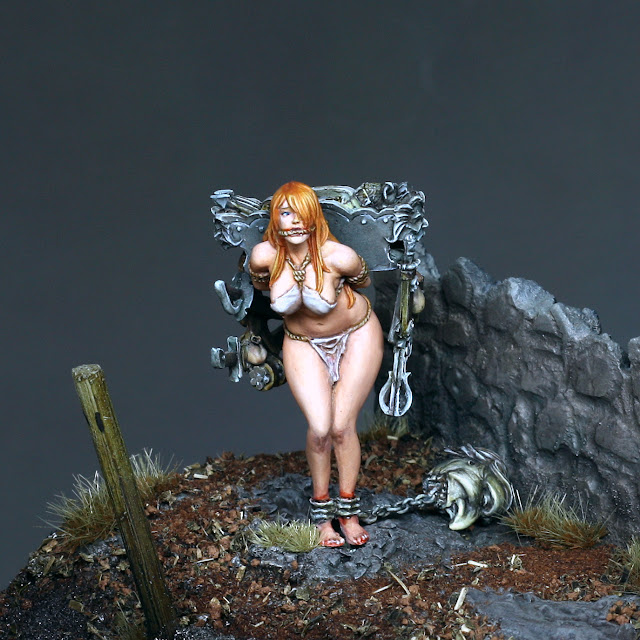 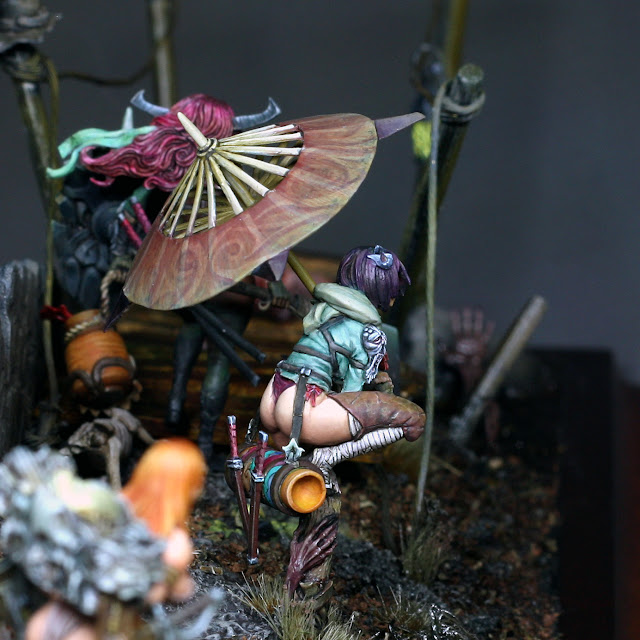 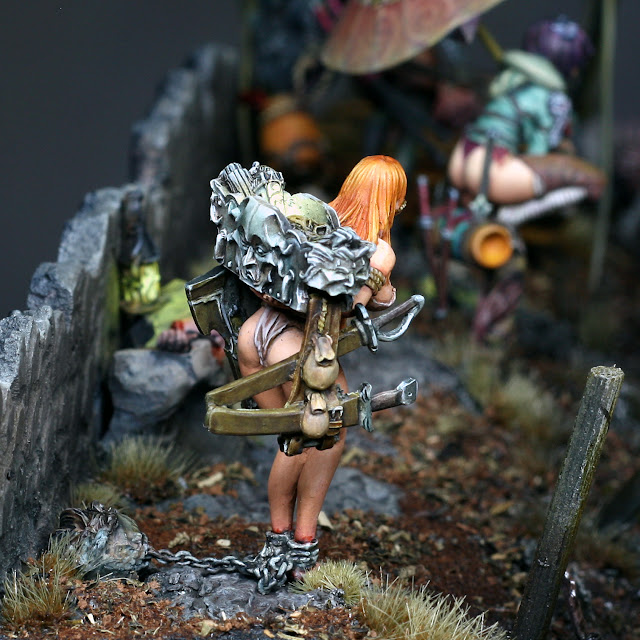 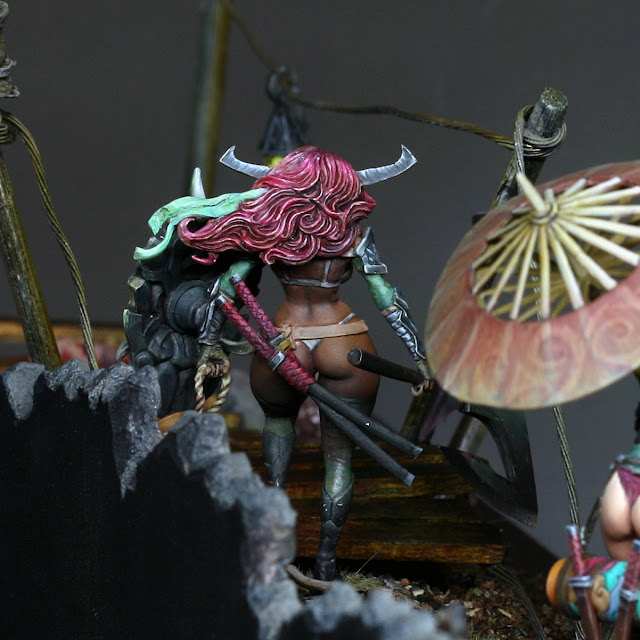 This has been a learning journey about myself and painting projects. As a whole, I don't like being tied down to a single subject for too long. Even when I'm knocking out these survivor models, I am usually doing different colour combinations or working between wet palettes or well palettes, sometimes wet on wet blending, sometimes glazing and layering. In order to get through this piece without my head exploding I had to kind of treat it as individual projects. I needed to limit the colours in use throughout so that the end result didn't look like an explosive fart in a Skittles factory, but I wanted to paint the base and each model largely independently.
The base was planned and built largely to the client's brief, though I decided to add the rope bridge just because that was the idea that I had in my head. The idea of dismembered corpses and people turning to skeletons in the KD world is not that much of a stretch, but I did want to convey that (most of) the protagonists in the scene still found it pretty frightening. Each of the sculpts had their own characters and features to push out, but the faces for all were a joy to paint. In the end I'm quite pleased with the final look. There's lots of tea leaves in there, kebab skewers, coffee stirrers and tinfoil too! This hobby is nothing but thrifty at times! ^_^

January has already seen me on the way to completing 3 miniatures. The first is the Zachary model above, but the other two are for Paranoid Miniatures' Mythos Game in preparation for their Kickstarter and for their presence at this year's Salute. I can't show the models just yet, nor the art, as the client hasn't previewed them themselves yet. I'll be sure to show them when I get clearance though. I did the Sea Queen model for them last year, which proved quite popular. There will be 5 that I should be getting done by April for them.

I have a good few months of commissions ahead of me, not least because several people have asked me to work on their KD:M starting models & monsters, plus a few pinups too. I also have some different scaled work to come hopefully, which should be interesting.
In between, I also have the monstrous Lion Knight (1st) to do for a friend. I've built the base and model and got it all primed. I need to decide on the colour scheme still. I have thought that I may do the cloud of faces something similar to my Y'Sala & the Darkness piece from about 5 years ago, but we'll see. Speaking of that particular piece, there is a chance that I may be revisiting it later this year too. That is exciting for me! ^_^ 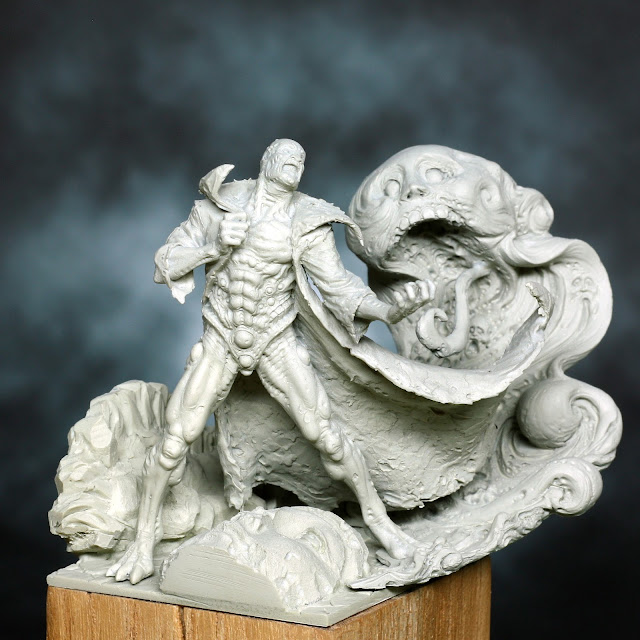 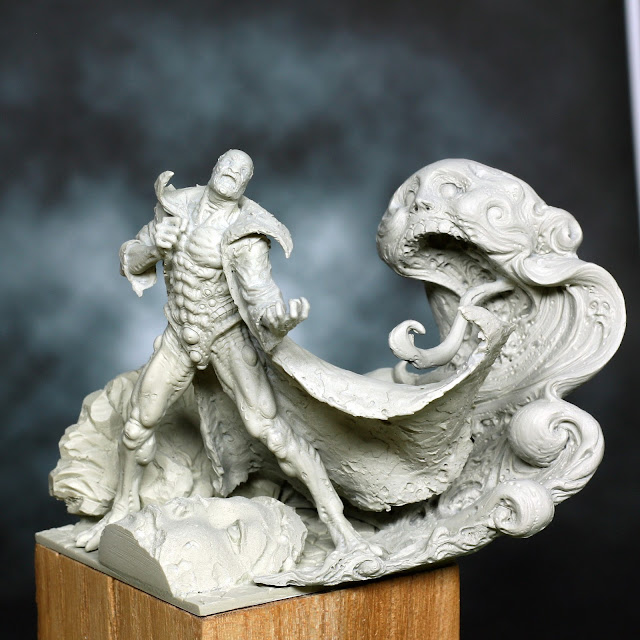 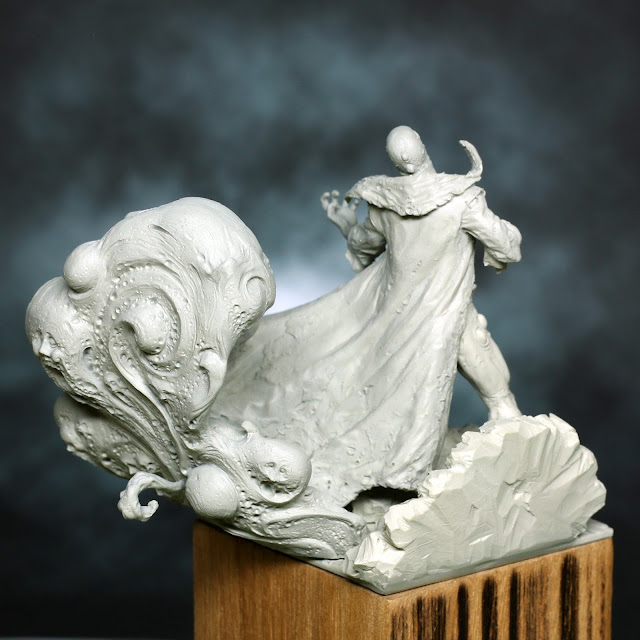 The last giveaway was stuff from the grey pile. I should think that I can go one better this time. I have enough of Kingdom Death's plastic crack around the house that I really ought to go one better.

How about I give away a fully painted unique miniature for the game? The winner can choose either a custom survivor or a monster - I have several spare armour sets and monsters so there will be plenty of choice.

How do you win? Well, the diorama above has stumped me for a name. I can't decide what to call it, and neither can the client. So, I'm asking you, the reader, to think of a name. "Simple" as that!

What I need is a name either here or in the comment section attached to the original Facebook post. It can be a short couple of words or a sentence, and in English please.

I will choose the winner during the week commencing 18th January and will announce later on that week.
The painted miniature will be fitted in amongst the schedule, but I will try to get it done asap. It will come on a "basic" gaming base rather than a plinth.

Good luck everyone and thanks for all of your support!