I'm all over the place at the moment...

In my work life there's absolutely loads going on, and at home we're gearing up for our (not so) little one's 4th birthday, plus starting the preparations for him starting school in September.

So, my hobby stuff usually provides a bit of quiet of an evening. However, just lately I feel like I'm flitting around and not quite following my normal pattern of working, which is to take a piece from start to finish and then move on. Instead I'm prepping pieces, priming others, experimenting with colour on others, painting bases, and tweaking another.
I'm certain that multi-tasking like this is less efficient for me because I'm not getting into the work flow that allows me to concentrate and focus. I also think that it will be to my detriment in terms of quality IF I don't get it under control shortly. I have a short list of commission bits in the pipeline, of which I have another two pieces for Paranoid Miniatures' Mythos Kickstarter to do. Pics will follow there shortly.
After the current list I think that I am going to have a little break from commissions and just do my thing for a few months. I have plans to work on a few slightly larger scale pieces, but I also have a lot of half formed ideas that I need to work through too.

So, what have I been up to that bothers me so much?

Well, first I received a couple of big stone faces designed to complement KD:Monster a little while ago from Jun Chu Minis (These are being produced under permission from KD towers by the way). I said that I would get one painted for Jun to put on the site and so on, so this is my effort... 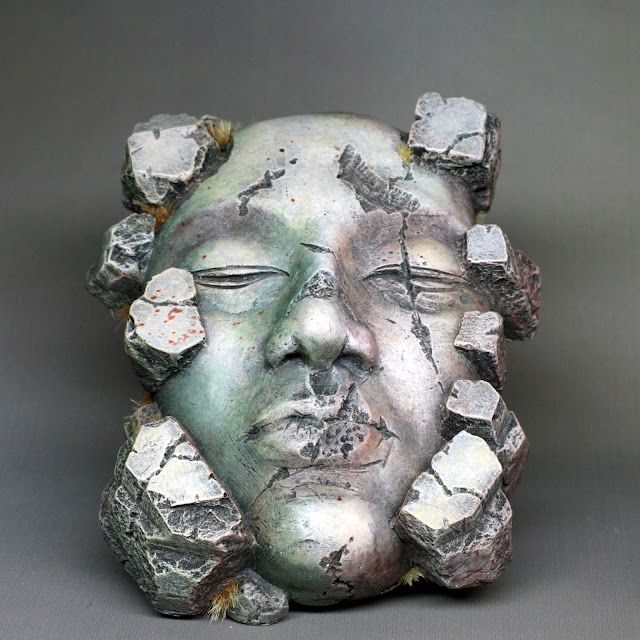 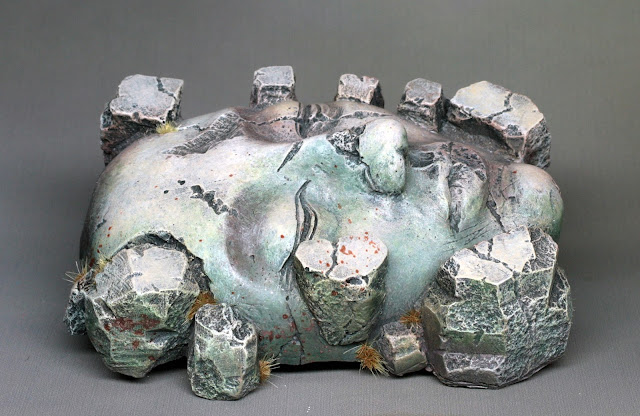 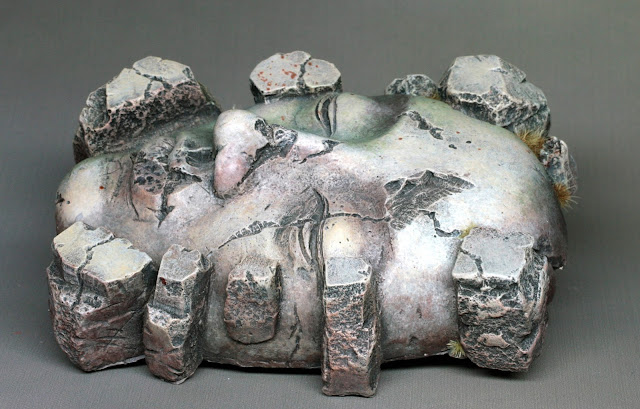 I'm really not used to working on terrain beyond the odd plinth, so this was an interesting challenge. I really like the sculpt and it was good fun to play with some colour contrasts on what is essentially just stone. If you're a KD player, the face has been done in such a way that the face can easily be used in the game - I have done so - and your survivors will stand on it quite nicely.
I have a second one to do for myself, which I originally intended for the game. However, I have just recently thought that it might make for a nice collective base for the 2nd set of KD pinups... We'll see ;)

Next, I've been working on the alternative (female) sculpt for Infamy's Tesla. She is finished and based, but now that she is on the base, I think that it looks under populated. So, I think that there will be some additional flora and fauna to add. However, this is her up to this point... 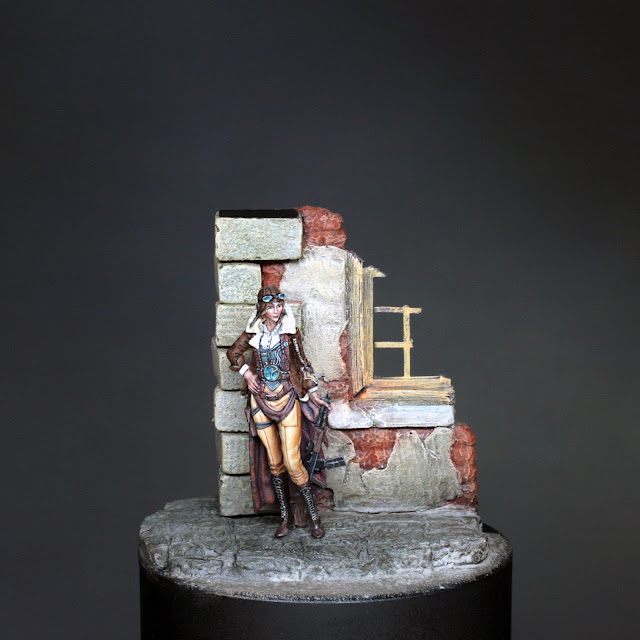 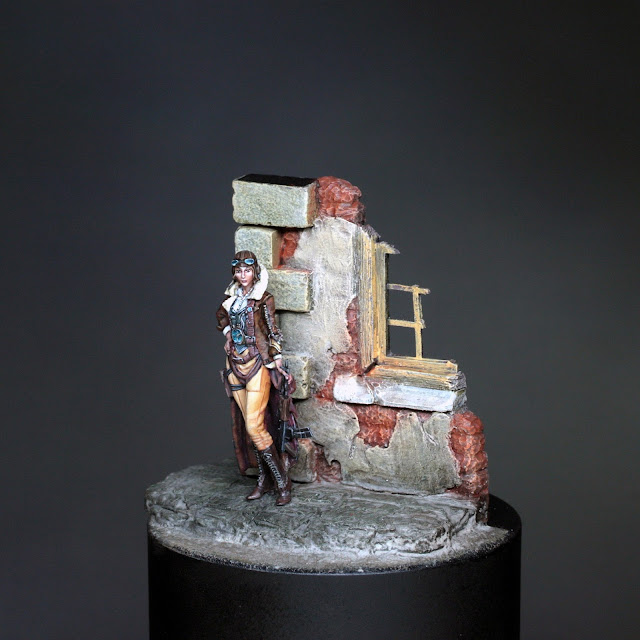 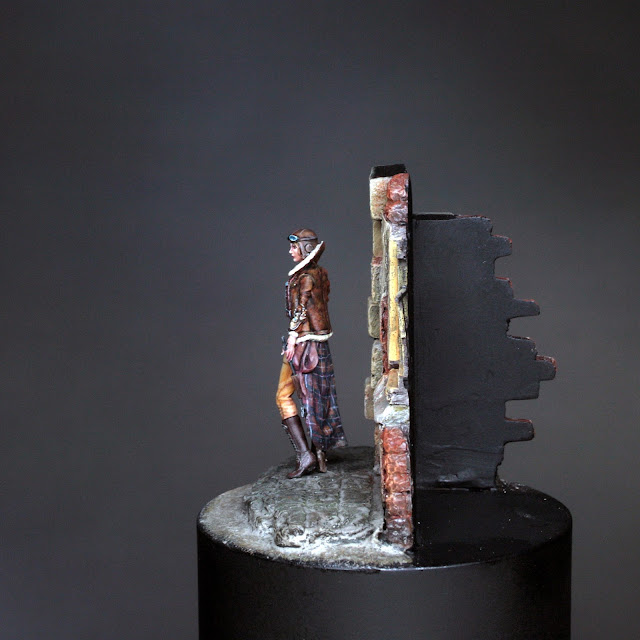 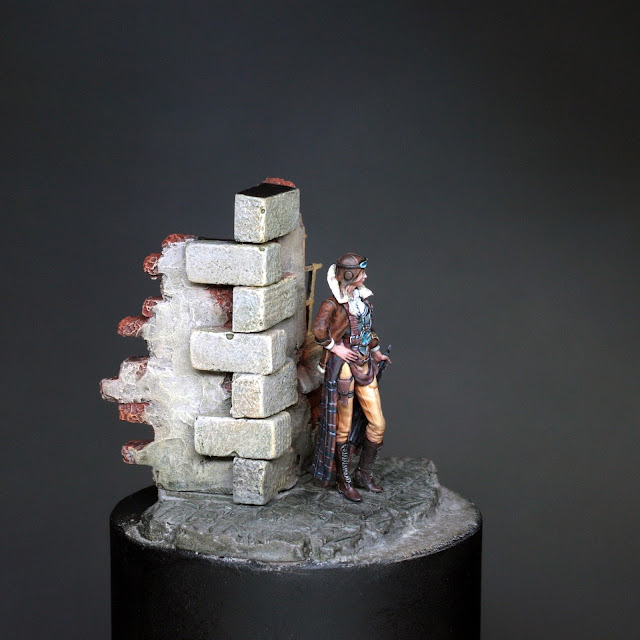 She's ever so small, in fact James at Infamy has recent said that he plans to run a 54mm version of her, which would be helpful because some of the details, like the clock on her chest, are almost invisible at this scale. That said, she's still a really nice sculpt by Joaquin Palacios and I've enjoyed doing the various textures, especially the various leather types that I wanted to look distinct from each other - hat, jacket, straps, boots, holster.
The walls/pavement scenery are from MDP by the way. I've had it for a couple of years now, and just not got around to using. Like I said above though, I need to add a bit more character to the setting, so I'll have a little think on that...

Next. JoeK's Atalanta. I've done the base. Next will be the model herself (after the Paranoid pieces are complete)... 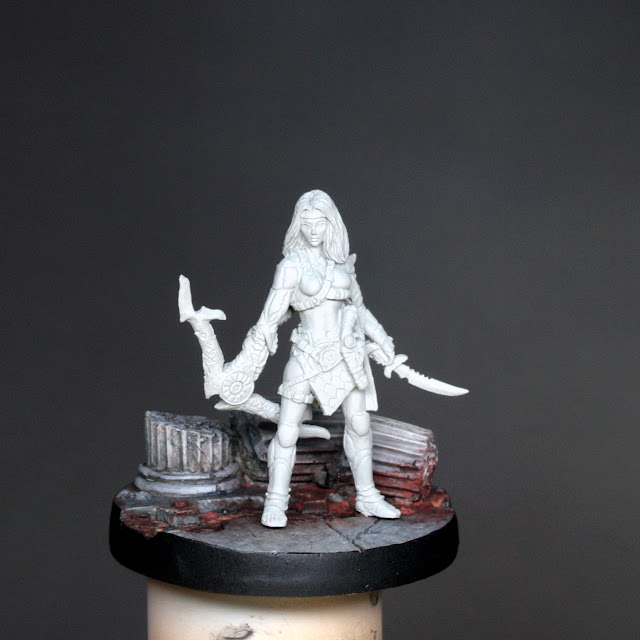 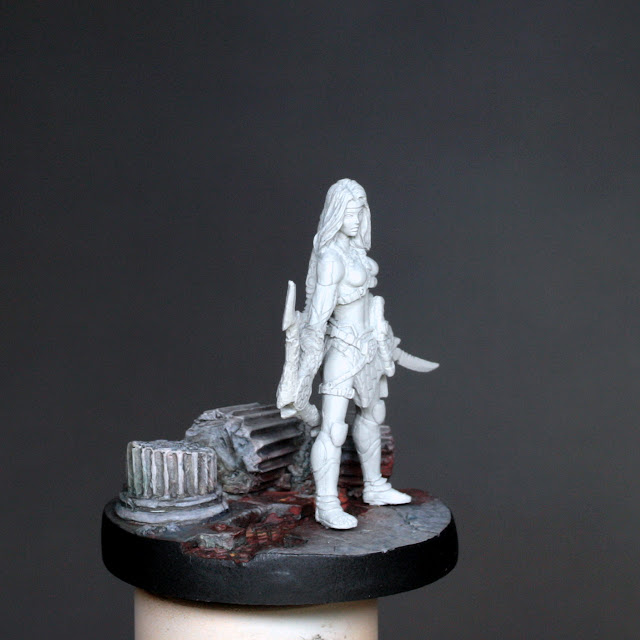 Not a lot more to add on this one. Again it's an old base that I've had sat in the drawer for a while. She's the right theme for the base. Job done! ^_^

Finally. The KD Lion Knight (1st). I've not progressed this much other than doing the basic stone work on the base, but I'm also playing with the colour tones that I plan to use when I get down to painting it properly... 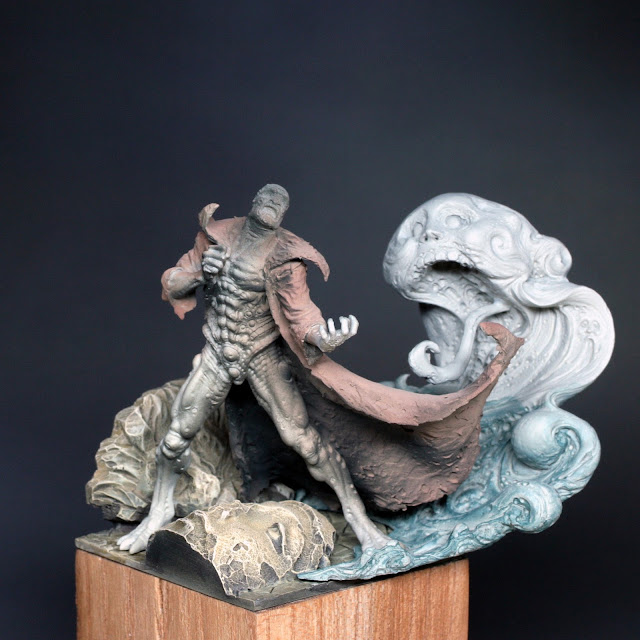 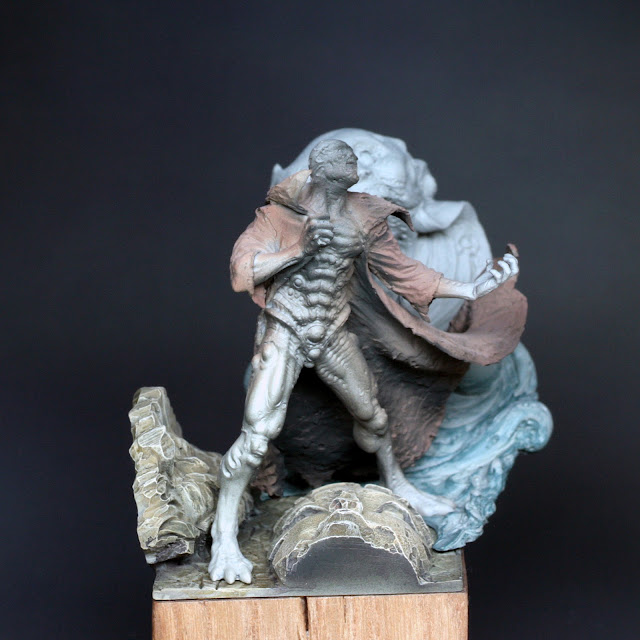 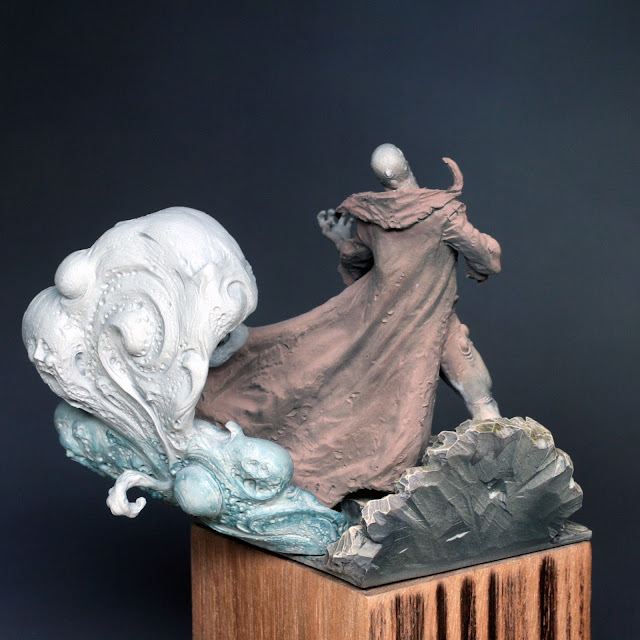 It's quite funny that it looks like a kind of primary colour triad of red/blue/yellow. I very much doubt that it will be anywhere near as "simple" as that when I get to painting, but still, it's a bit of fun.

OK, that's me up to date. Maybe I'll get a little bit of painting in this weekend, but being a public holiday on Monday, I suspect that there'll be lots of family time, so we'll see.