It's October, and for me that means that I retreat to the man cave and wait out the winter, ready for Salute next year. In fairness there are absolutely loads of shows that I could attend, like Scale Model Challenge, Monte San Savino & Hussar, but finances, day job and family time just don't allow for me to disappear for 3 or 4 days right now.
I keep saying to myself that I'll go to some of these shows next year, but "next" always seems to stay one away from the actual next one! :)

So, my last show of the year was Euromilitaire, and it was a great weekend for me. My wife and I headed down to Folkestone at a leisurely pace on the Saturday morning, and I popped my entries in to the competition. The Fantasy category this year was absolutely HUGE! So much so that I had to re-organise the shelves to get my entries on and create enough space for others to do so too. Fortunately I am lucky enough to be a judge at the show, so I was allowed to do this (very carefully), as the adjoining shelves for the next category at the show (there are over 30 categories, by the way) were swamped with pieces.
The judges of the Fantasy category really had their work cut out for them, to the point that they were still deliberating over final placings a good hour AFTER the best of show had been decided!
The Euromilitaire website - LINK - gives a quick insight to the weekend, but I (as always) didn't get virtually any photos, I'll here's a link to a good gallery from Kyle Kruickshank aka Mr Lee - HERE -
there's a few of my own minis in there, but there's also plenty of rather lovely minis in there that had me gasping at times.

I decided after a little cajoling to enter 8 pieces this year, far more than I have ever done before, but I feel that I've been relatively prolific this past 12 months or so, so it was worth a punt. The result? 8 entries, 8 medals!! 2 silvers (M'Dusa and Kassandra), 2 bronzes (Steampunk Boudi and Virago), 3 Highly Commended (Clio & Erato, Dragon Huntress and Gandalf) and a Commended (Shido'ni). I'm still hunting that Gold medal, but I'm getting closer, and to get my overall standard up to a level where every piece is considered prize worthy... Wow! Happy days! :)
I drove home having competed, judged 2 categories, shopped just a little, caught up with some friends old and new, ate well, drank well, slept well and at the end felt pretty encouraged by it all.
Overall, the show seemed to be a much happier place this year. The attendance was up, the competition entries were well up, there didn't appear to be much controversy over winners and losers, and the sun shone for the whole show too! I'm already booked to be back next year...

So. Euro in the bag, like I said at the beginning, I shall now retreat to the cave and tinker away until the days start getting longer again.
I've been pretty motivated since the show to get some pieces finished off, first was the Poppy's Angels piece, "Of Saints & Angels" which I've been showing here. I have already posted her up on Putty & Paint - LINK - and she was "Editor's Choice" on the front page for a few days, which was great, mostly for the positive input for the charity involved, but also on a personal level. The raffle draw is being held today (October 2nd), so good luck to those who have entered, and thanks for donating too, as you've contributed to a great cause. On an extra positive note, Poppy herself has very recently completed all of her cancer treatments and been declared "free of cancer". Such good news, and hopefully she and her family can look forward to putting the awful past 12 months behind them. The Poppy's Angels group will continue though, with the intention to keep supporting families with child cancer. Good effort! :) 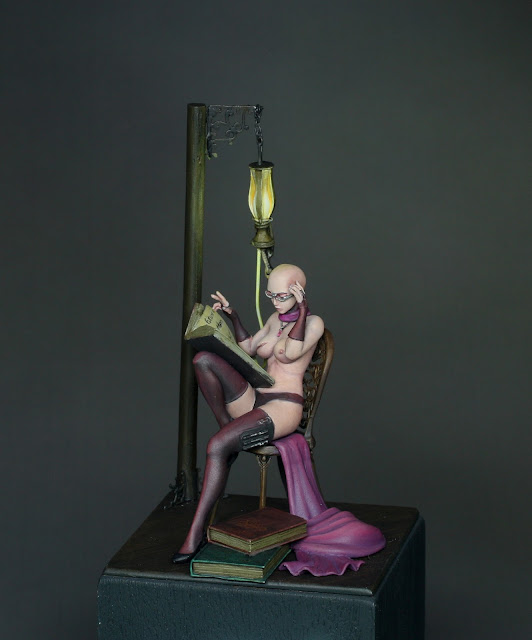 I also have been working slowly through the second collection of Kingdom Death Pinups over the past year, with the Phoenix Dancer and Lioness done and in my galleries (click on the names for links), more recently I completed the Sunstalker Dancer, but haven't shown her. This week I also completed the Leather Queen. I've followed the Lokman Lam concept art again with them and these two are in the new plastic which the Kickstarter backers have been receiving since the beginning of September. The Leather Queen is a really unusual sculpt, and definitely not the easiest to make work, as the hair and leather are all intertwined. I kind of struggled with her, but I wanted to do her so that I could do another collective shot of the pinups when they were all complete. I'm very much looking forward to the next lot, though it will be a little while before I finish the gang due to commissions and other minis that are higher up my list. I've also not yet based these latest models, as I'm contemplating doing them all on a timber plinth or similar...
The Sunstalker Dancer was a little more straightforward, though the half green hair took a little bit of thinking so as to not make it look a part of the cloak - I seem to have done a lot of green hair recently! 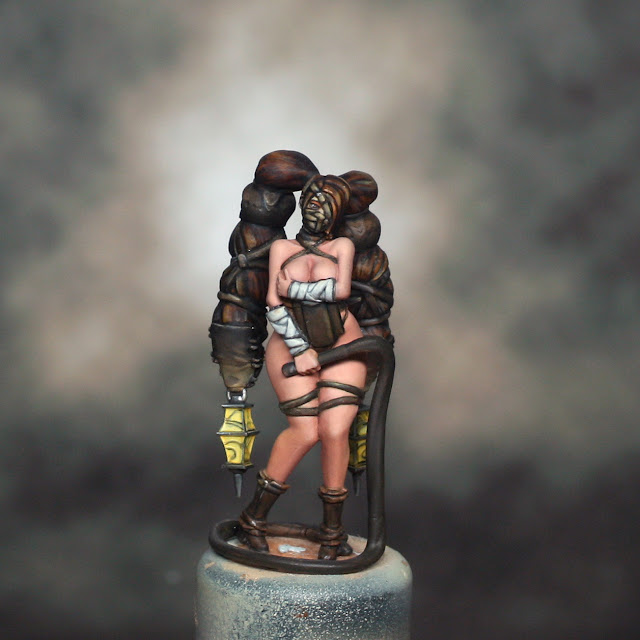 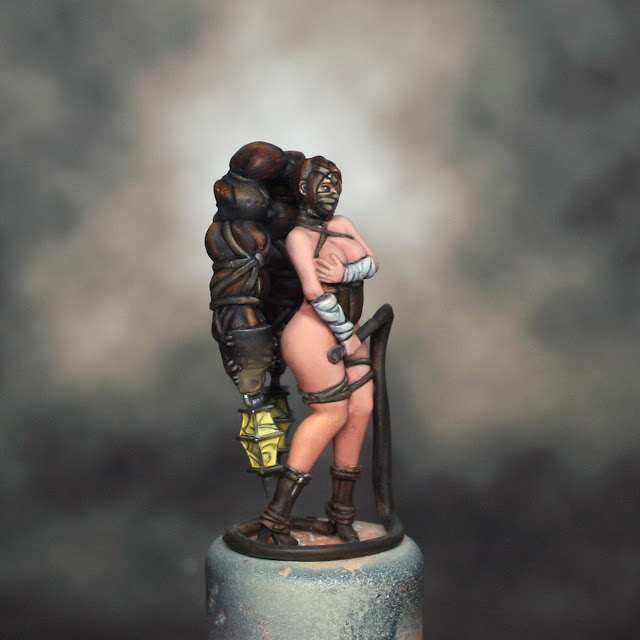 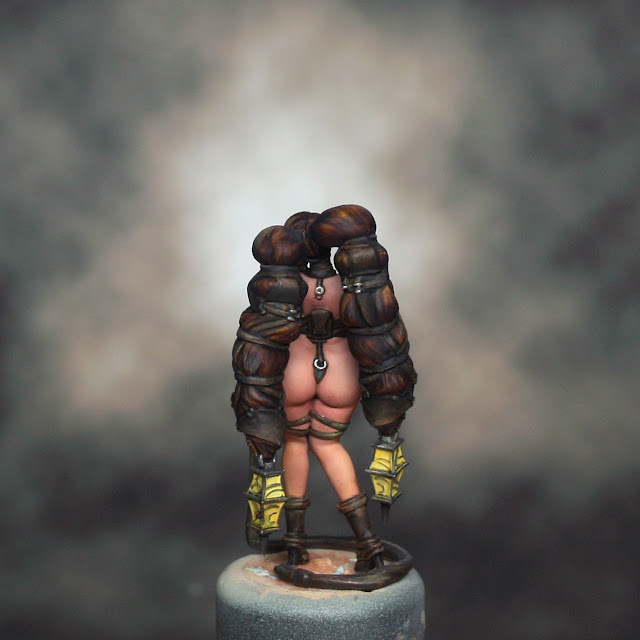 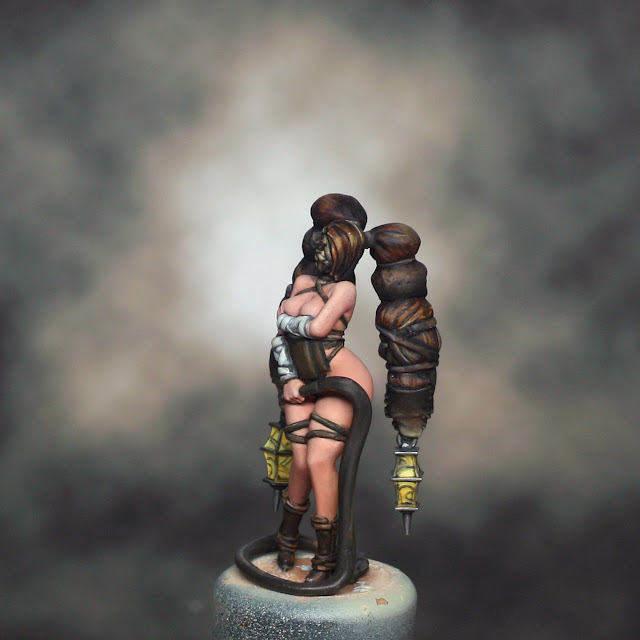 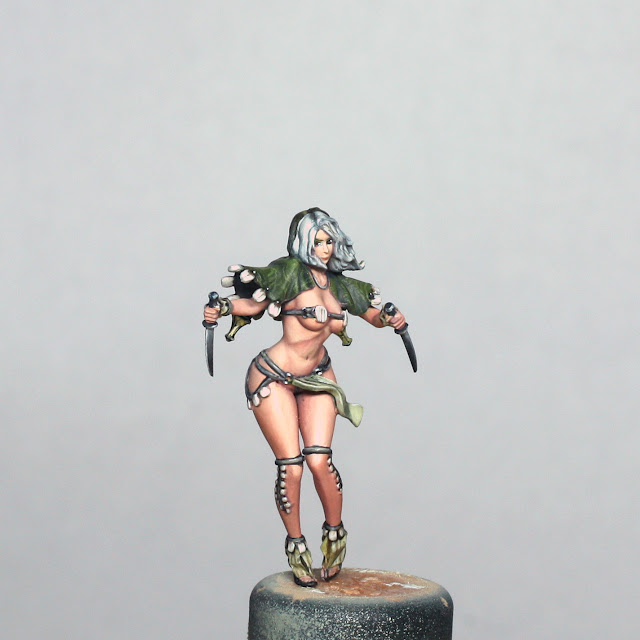 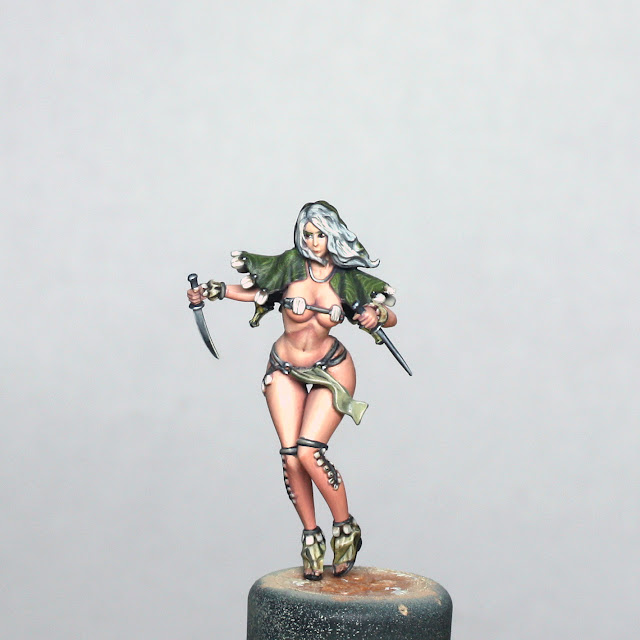 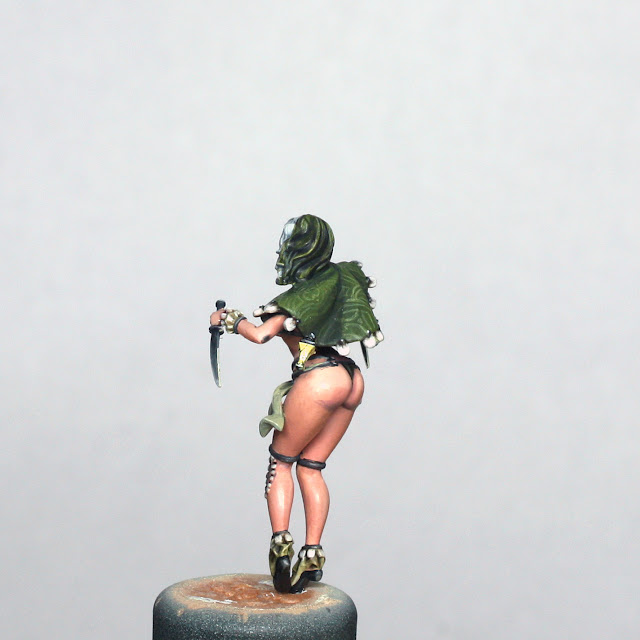 I've had a commission come up just lately that I'm excited about getting my teeth into, and will show soon. But, while I wait for the models to arrive, I have decided that this year I would get some seasonal models done. I have more than one Xmas model, but I also have one specific Halloween sculpt that I picked up last year and felt obliged to get done this year, and that is (unsurprisingly) the Kingdom Death Halloween Twilight Knight. I am intending to do this as quickly as I can, not through lack of interest/motivation/similar, but because I want to get straight on with the commission when it hits. I also wanted to try out the Scale paints in the airbrush for the first time, and use the PK Pro masking putty that I've had, barely used, on the desk for ages now. This is the result of about an hour of airbrushing. The black is kind of complete, barring a bit of edge highlighting and picking out a couple of folds. The photos don't really pick that out too well, but I'm not worried right now as these are not "studio" shots, as such. The orange though is much nicer and very nearly complete. This will just leave the skin, hair, sword and detailing to do, which really shouldn't take me too long to complete. While I don't like to rely on the airbrush, this does take so much donkey work out of the painting, and gives fast and effective results, so I'm happy. 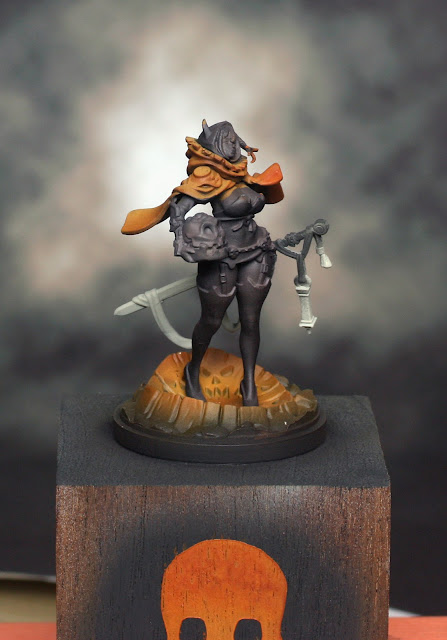 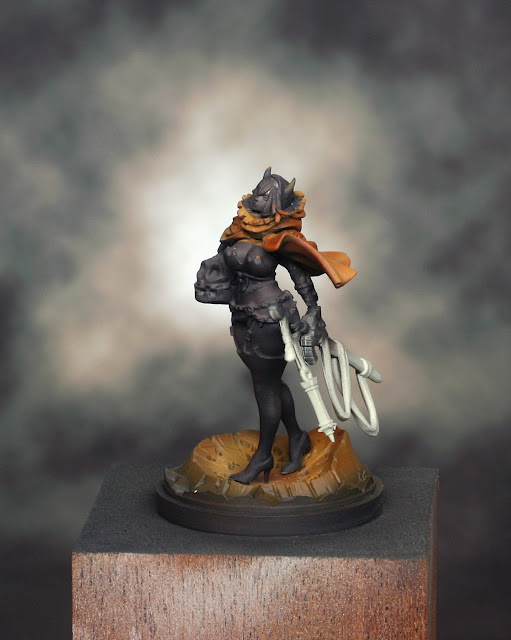 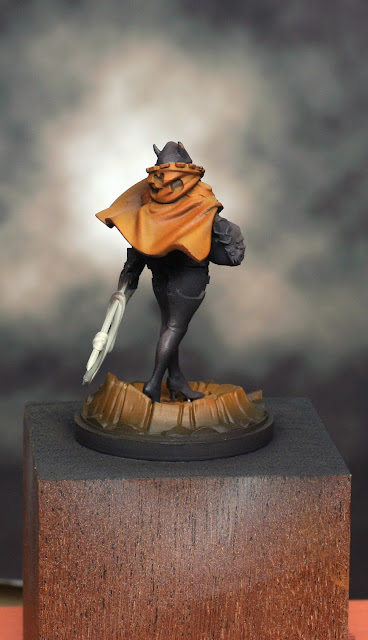 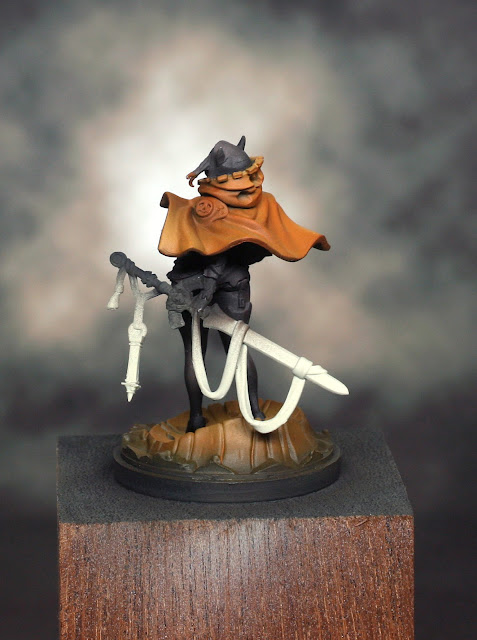 I shall get some new images in the galleries soon, as I have a couple of finished models to put up. But that's me for now. It's time to prepare for hibernation! ^_^
Posted by Unknown at 12:53