Time for a completely new and very different piece to what I've been doing of late. I have always enjoyed painting "modern" or "near future" type scenes and models, but I've been more in the fantasy/SF grain for a while, so the chance to do this piece has made me very happy.

I'm now working on the Blacksmith Miniatures' Clio & Erato set, but I wanted to have a little fun with the base work. It's always mind boggling when you see the Tim Burton-esque bases that the likes of Jar and Raffa over at Massive Voodoo create, and more recently the awesome scenery created by Ben Komets for his Crystal Brush 2nd place overall award winner, High Noon.
It's always kind of intimidating, in a "How on earth do you paint such a monstrosity!?" kind of way, and I must confess that I shy away from it a lot of the time, relying instead on little additions - like the watch and table on M'Dusa - to the scene, or paint effects like OSL to draw the eye and help tell the story, rather than going balls out with big scenery, stories in stories and lots of "stuff" everywhere.

I think that one thing that has always held me in check too is that I'm a fan of straight lines in my scenes too. It's weird, but I kind of need them to make sense of what I'm doing. It can be a hindrance at times, but with others it sort of helps... I don't know, but in this case I think that it helps because I could sort of compartmentalise the areas of the scene. I wanted an overall ruined and abandoned look to the whole thing, but with one area where humans do still go, and another where nature is taking over. The actual story of the girls in the scene should unfold when I add them to the base.

Lets do some pics then more words ;)

Early base building and painting (mostly with airbrush, plus some oils for weathering) 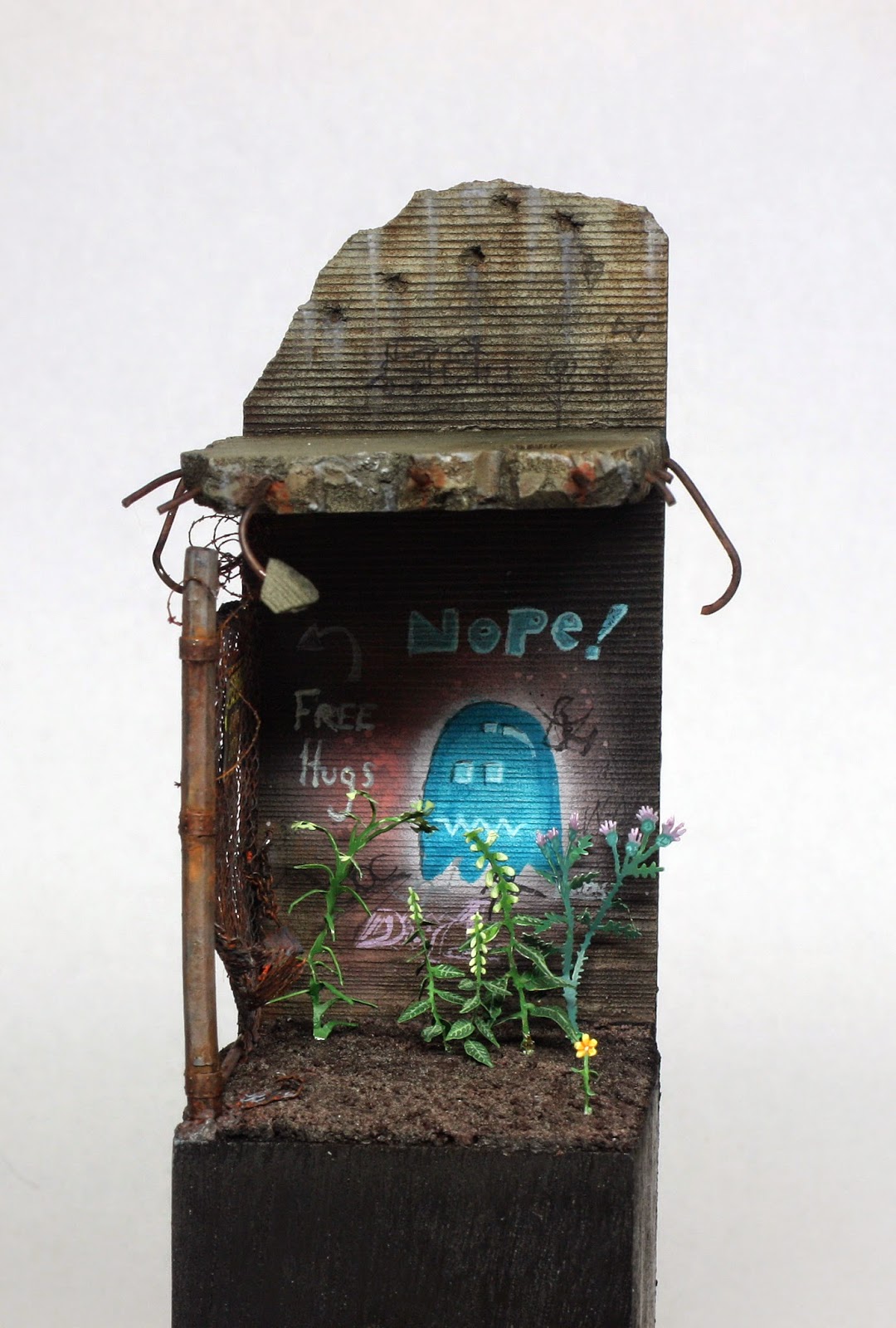 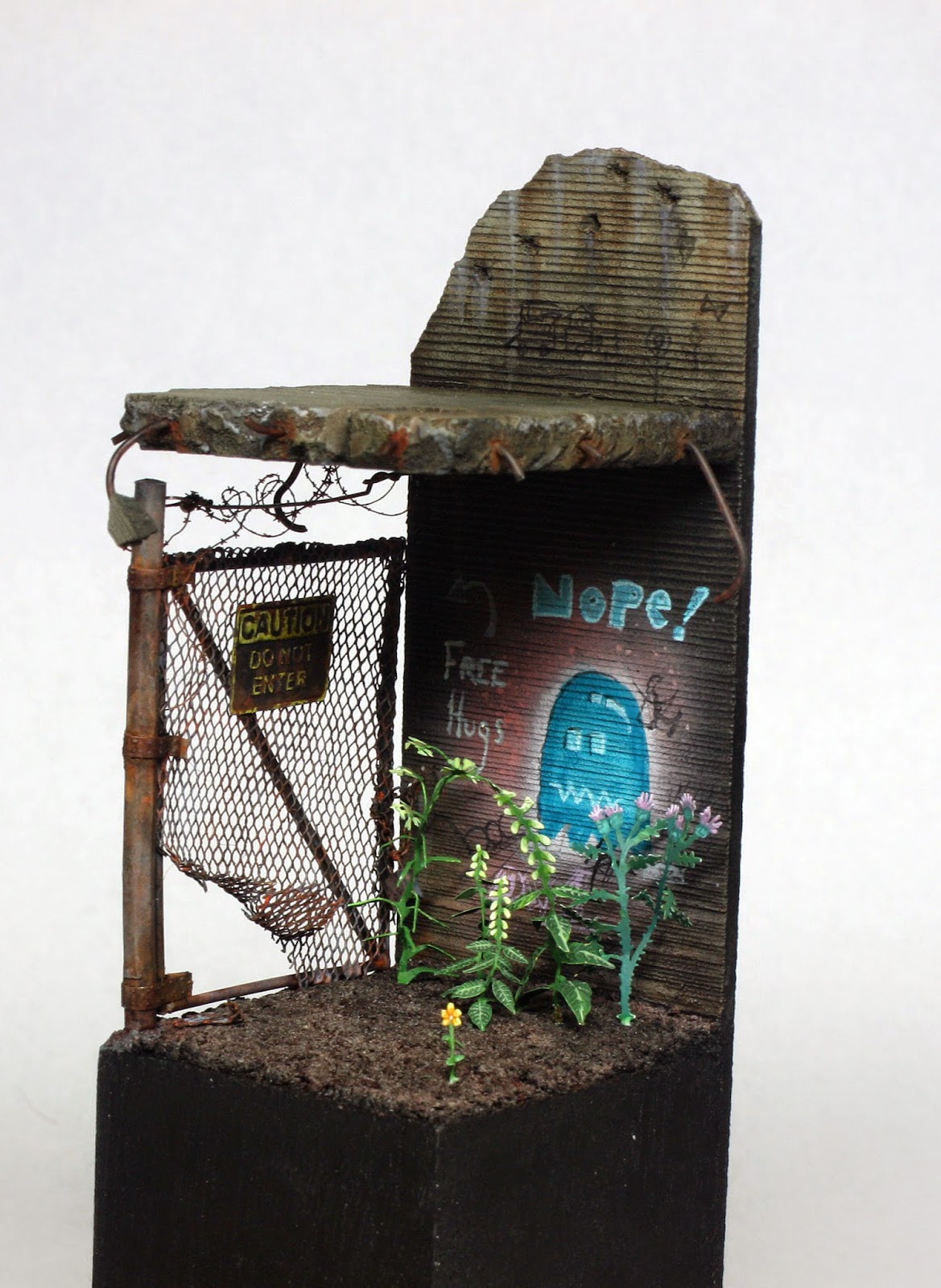 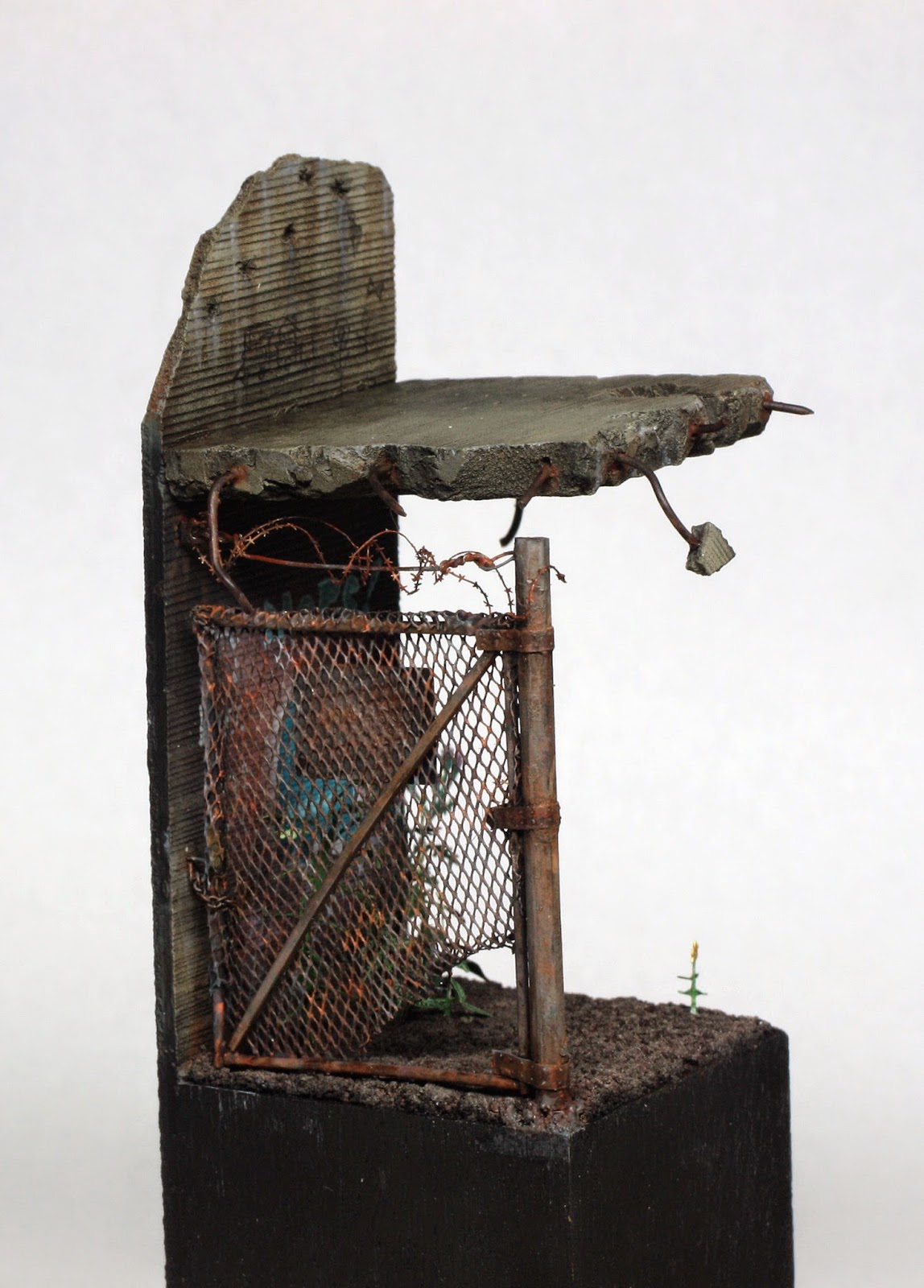 I had quite a bit of fun building the various parts in the scene. The back wall and concrete level are made from sculptiboard. The surface was like this already due to being sliced by a band saw. It was ideal for shuttered concrete, so I didn't want to sand any texture out of it. The rebars are just paper clips, which are always useful for pinning anyway, and the top level slides out at the moment to allow me to paint and access the lower level.
The gate is shaped plastic with some old mesh from an old frying pan splatter guard that we threw away years ago. It is perfect for this scale. The upright is a piece of modelscenery.com neoprene stuff, which comes in useful at times like this. The hinges, warning sign, barbed wire and plants up to this point are all brass etch that I picked up from Hasslefree over the years.
I also added a bit of brass chain held together by a little padlock that I made out of some bent wire and a tiny rectangular off-cut of the neoprene stuff.
The earth was one of those "I wonder what would happen if....?" things. I mixed Vallejo sandy paste with some pigments and it created this great looking soil. The odd thing was that the adhesive quality of the paste was lost when it bound with the pigments, so I had to PVA glue the plinth and smear on the soil, then rolled it down with my scalpel handle. As it dried it cracked a little to give a superb dark, yet dusty looking ground effect, which was ideal for the scene.
The graffiti was dominated by the Pac Man ghost. I had seen a trailer for a new film, Pixels earlier in the day. The film looks rubbish, but the inspiration was there. The rest is mostly random, though the "Free Hugs" bit I've seen several times before in spooky or dangerous looking places.

Once I'd done this, and weathered it all with oil paints - something that I almost never do, but I was feeling like trying something new! - I let it dry out and set about painting up some additions to the scene as a whole, namely some Mantis miniatures animals and a cat that I had from a long time ago - it's from a Steve Buddle sculpt I seem to recall.
I then placed them, along with some rubble, on the base before adding some grass tufts and some tall grass for good measure that the cat could hide in! 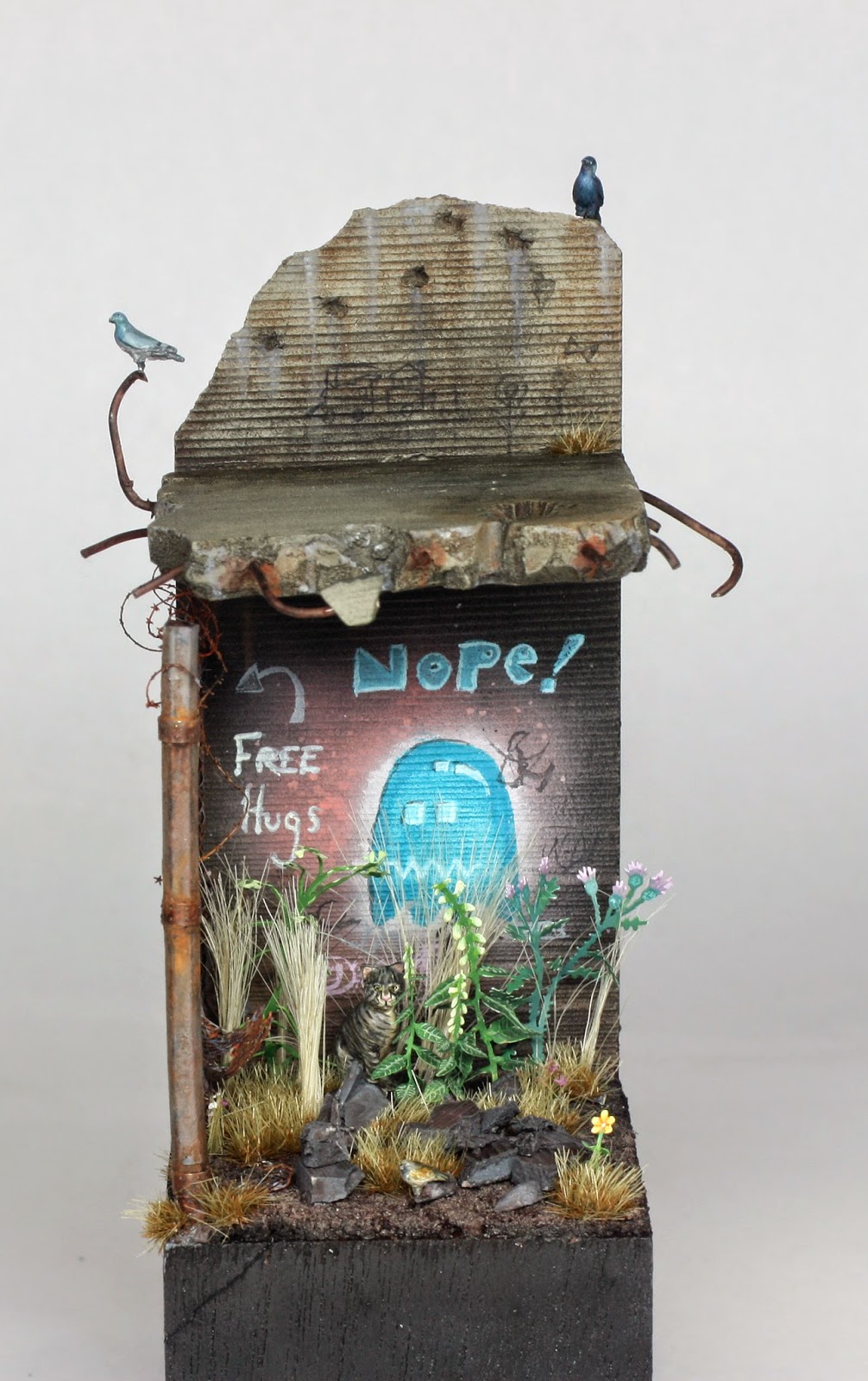 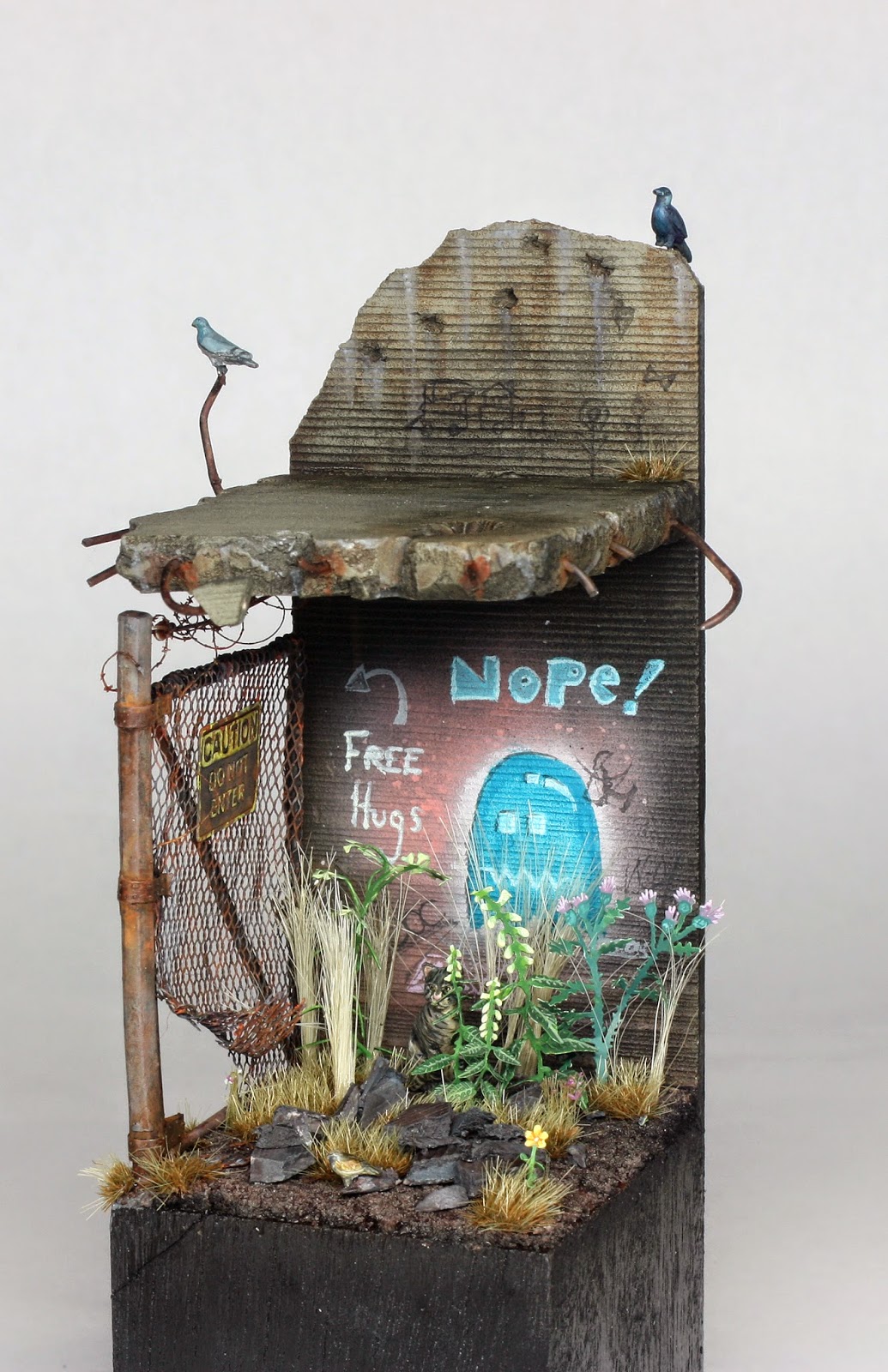 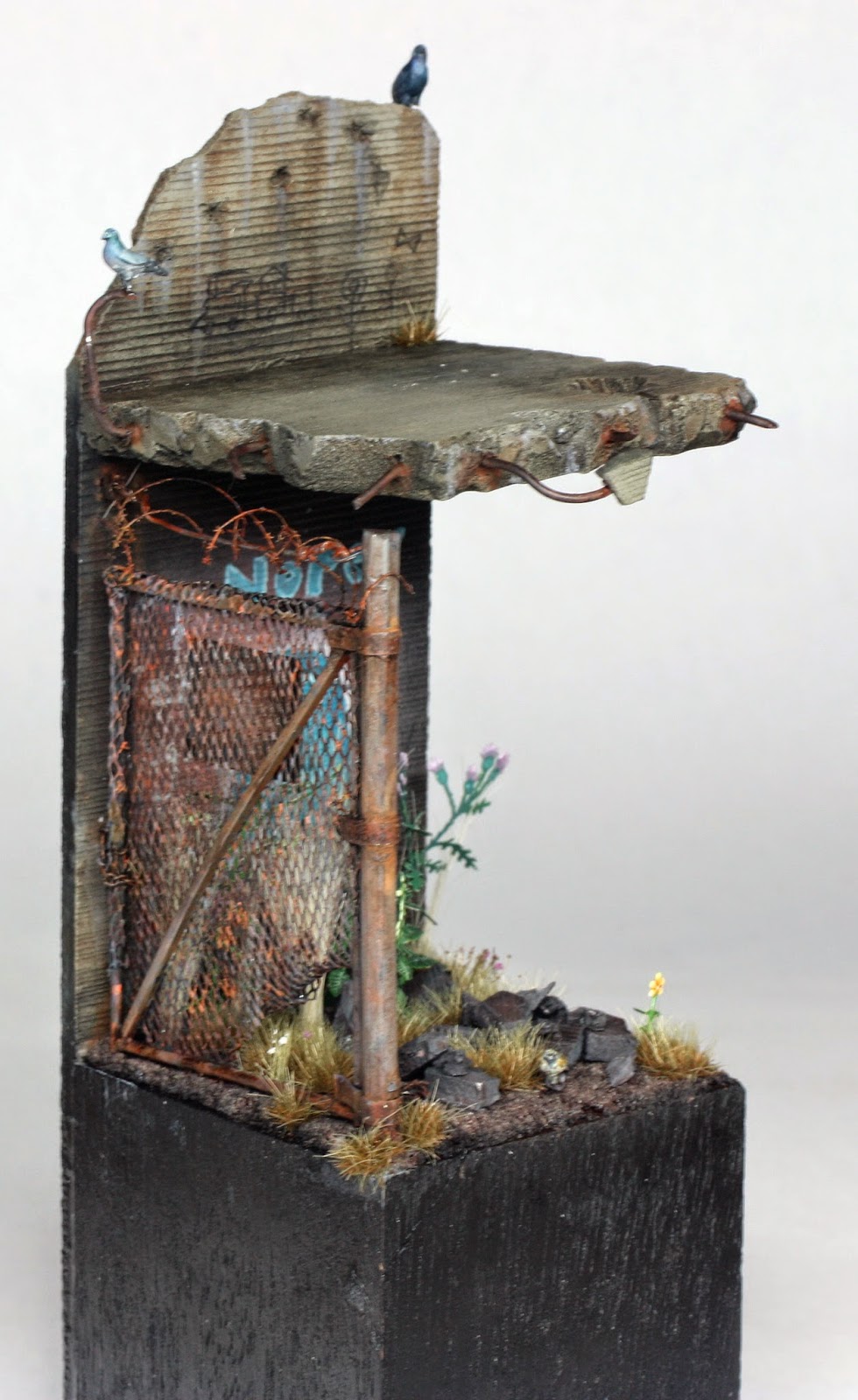 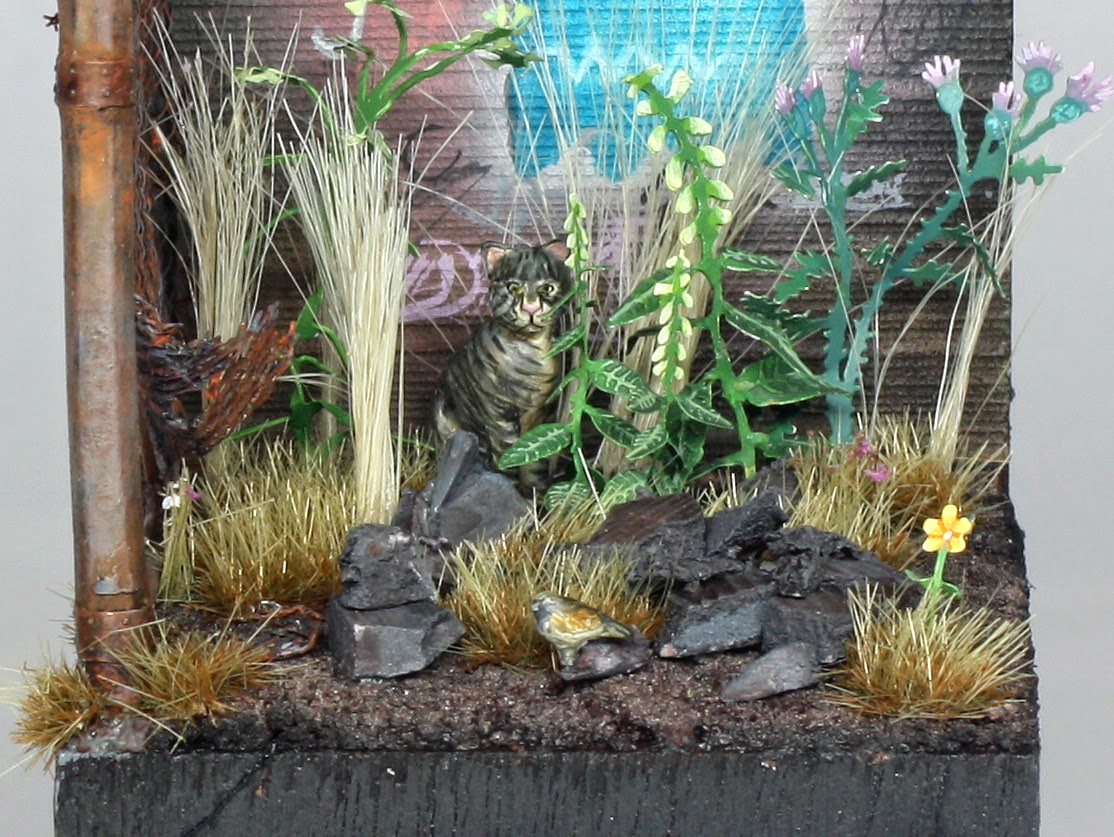 The scribbled graffiti at the top is a nod to the comic strip associated with Clio & Erato.

There's a few odds and ends that I still need to do to the base, but I wanted to make a start on the girls.
Sunday's session was unfortunately curtailed by an airbrush that decided it needed a full over haul midway through painting a primer coat...

With that resolved I managed to get onto the brush last night and decided to paint one of the girls' jeans. Now I'll readily admit that drapery in general is not my forte, but I do love painting denim. The thing with denim is that you can "cheat" a little because jeans tend to fade and weather where they wrinkle, and the highlighting elsewhere can use the same colours.
I've already been asked about the colours and method for "my" denim, so here goes...

The important thing for denim is to get the raw cotton colour right before you add the "dye" colour, so I start off with Vallejo Panzer Aces German Camo Splinter base, which is a kind of organic light grey colour, and quickly highlight it with Vallejo Deck Tan and Ivory. I then added the colour in really thin glazes, building it up by the seams and in the folds. The colour in this case was Panzer Aces Periscope (additionally shaded with german camo black brown), but equally something like dark sea blue or any other indigo kind of colour could be used, or a dark grey brown for "black" jeans, or an olive drab colour perhaps for a chino type look.
Once the colours are in place I did a little texturing. This was essentially lots of extremely thin horizontal stripes in the highlight colour, then vertical stripes in the indigo colour, then more horizontal stripes in a mid-tone and again in vertical stripes. The whole process only takes a few minutes, and is done more on look and feel than distinct method, but once done nicely breaks up any harsh transitions and allows me to easily build up additional wear to the wrinkles, knees, fronts of thighs and such. A little final glaze here and there, plus a bit of picking out the seams and stitches with the black brown and some VMC dark flesh for the orangey gold stitching, and that was pretty much it... 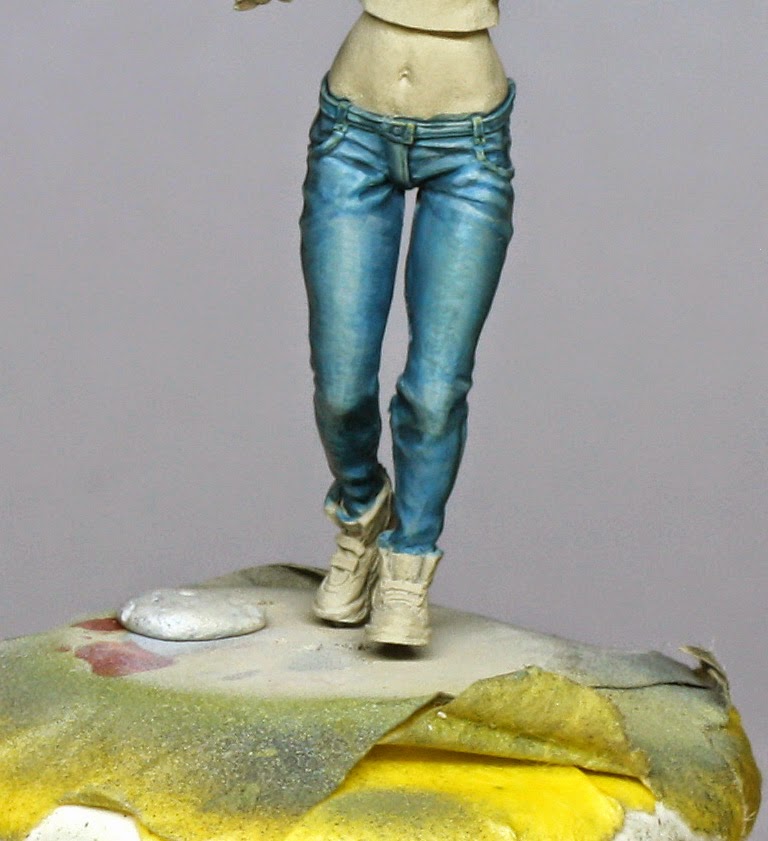 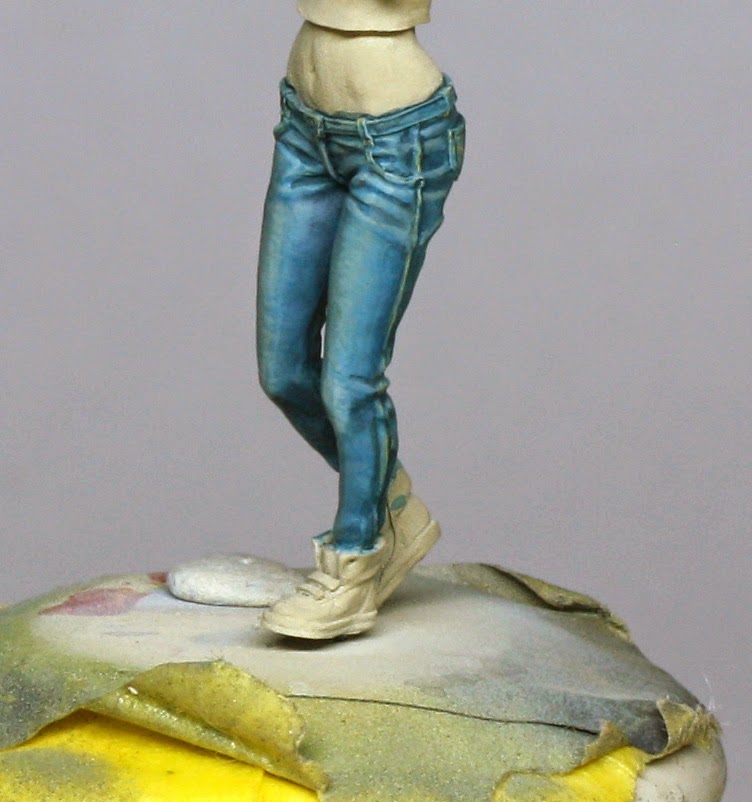 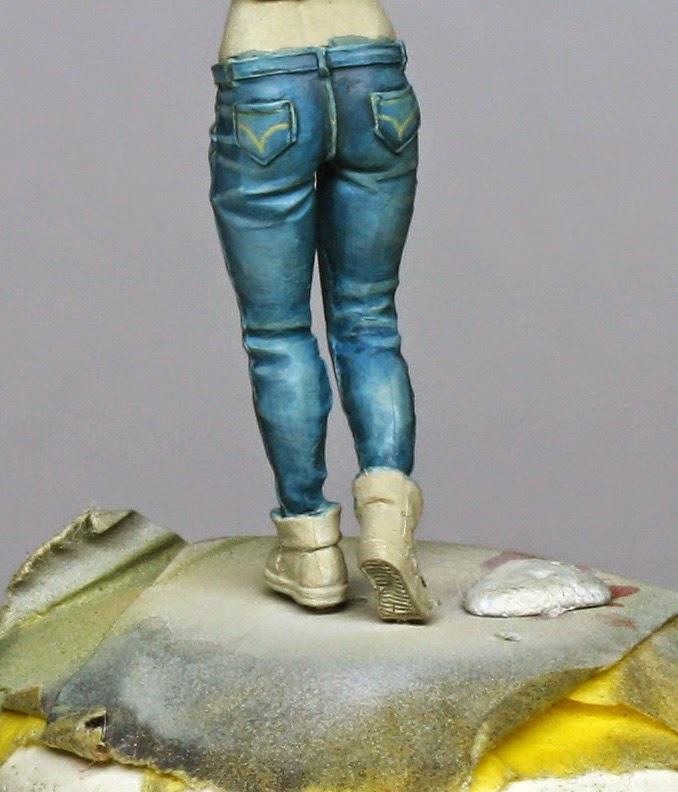 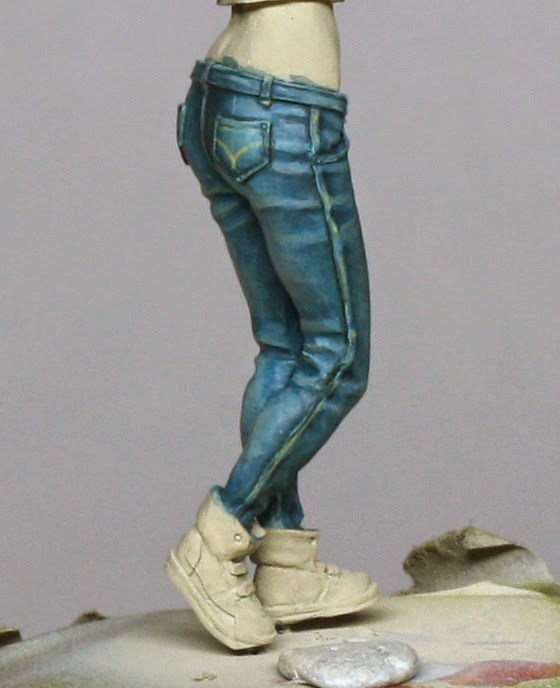 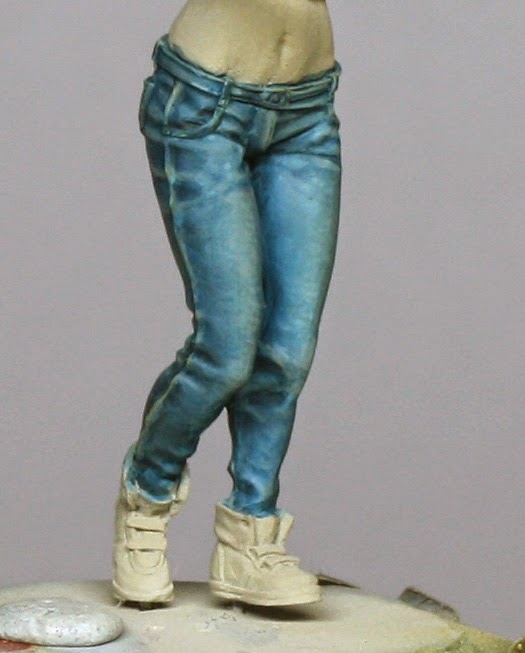 I have more denim to do on the other model, plus leggings, some motif t-shirts and the sneakers for the girl above... I'm going to enjoy this ^_^

Oh, and I've mentioned it on my FB page, but there is a kickstarter running until Sunday - https://www.kickstarter.com/projects/wamp/wamp-select-series-paintbrushes - by Wamp, one of the forums that I frequent.
There were some weekend classes with me available (there may be more...), plus I've helped Brett put together a little kit of stuff that I use regularly, including the eponymous black latex gloves that I'm so fond of (lol). So, if you're in the market for some nice brushes and accessories, I suggest that you get in there, as the prices are rather tasty! ^_^