Well. Work for the year is nearly over, and soon it will be time to switch off the alarm clock and hope that the little one sleep beyond 6.30am! I am fully looking forward to some high quality family time, some nice food and drink, and hopefully to catch up/chill with some friends too.
Ideally I would like to do a bit of a 12 month summary between now and New Year, but more of that when it happens ;)

Before all that I have some recent progress to show, and also a look at what I have got planned to put together and paint between now and the spring, when I come out of the cave for my first planned show of 2015, which is Salute.

First up, the Kingdom Death Visionaries vignette is finished and photographed. I've named it "Onwards and Upwards", which is partly reference to the story in the piece of the boy leading the girl forwards towards the eerie green light, and most likely their doom. It is probably also a bit of a point to myself to look positively to 2015.

Here are some finished shots... 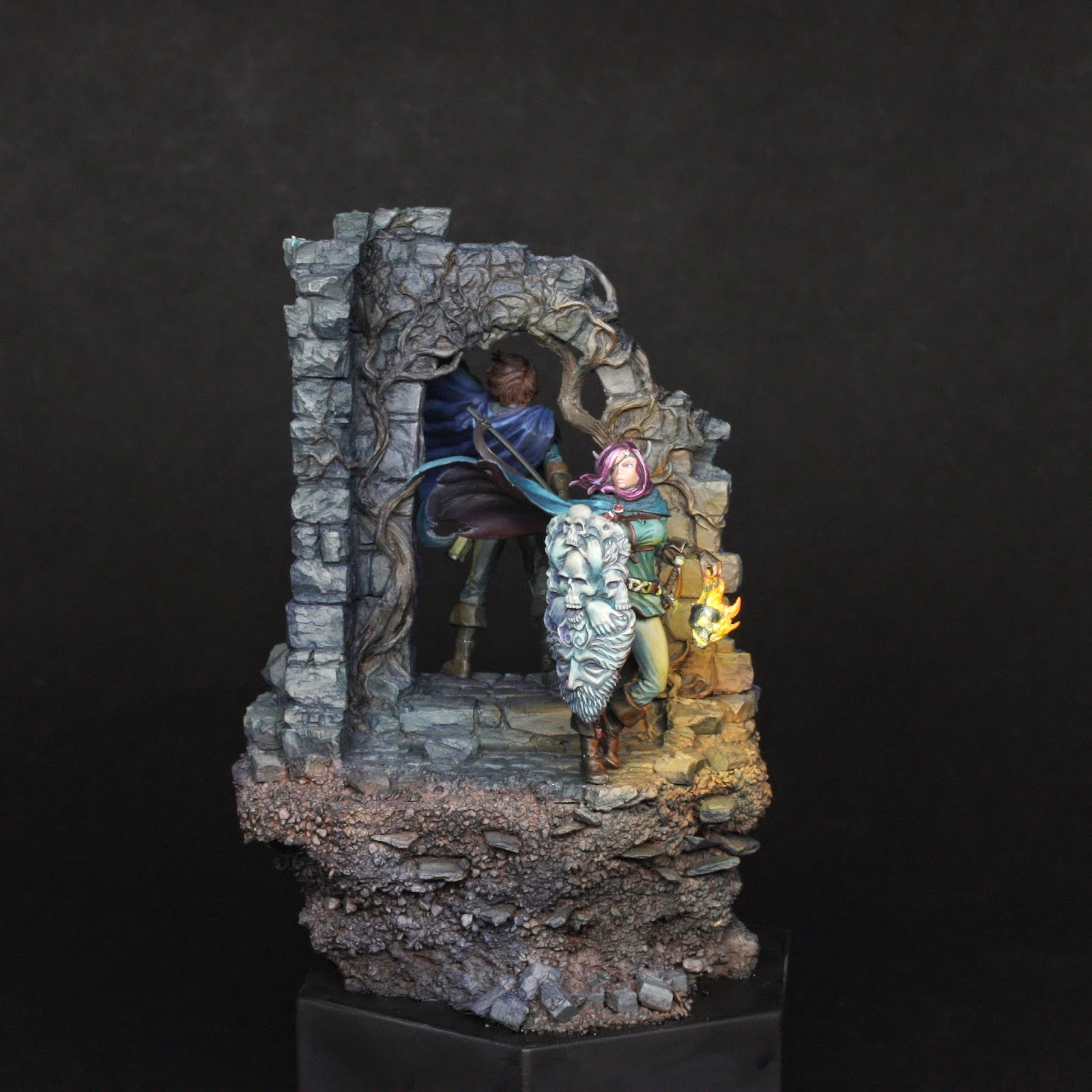 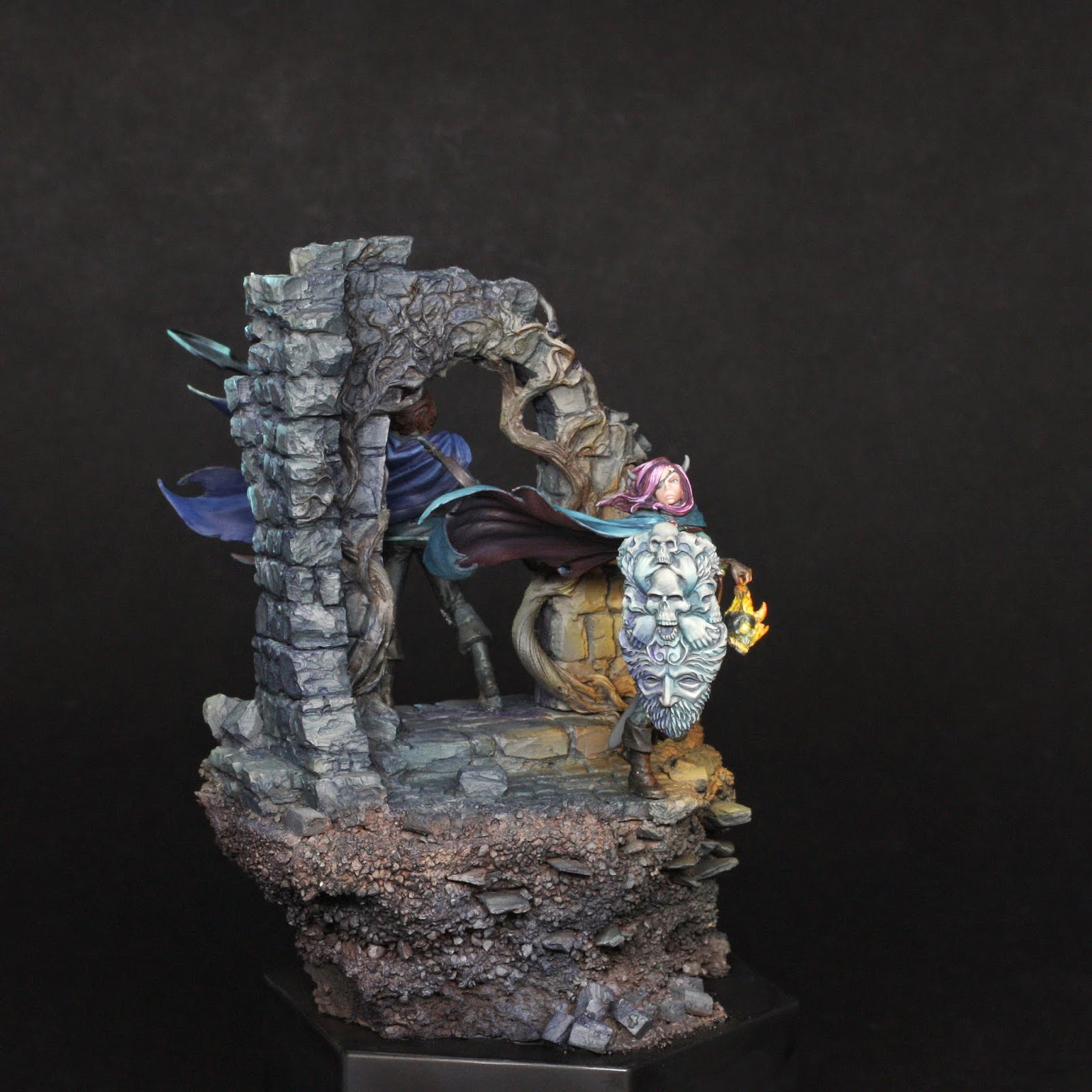 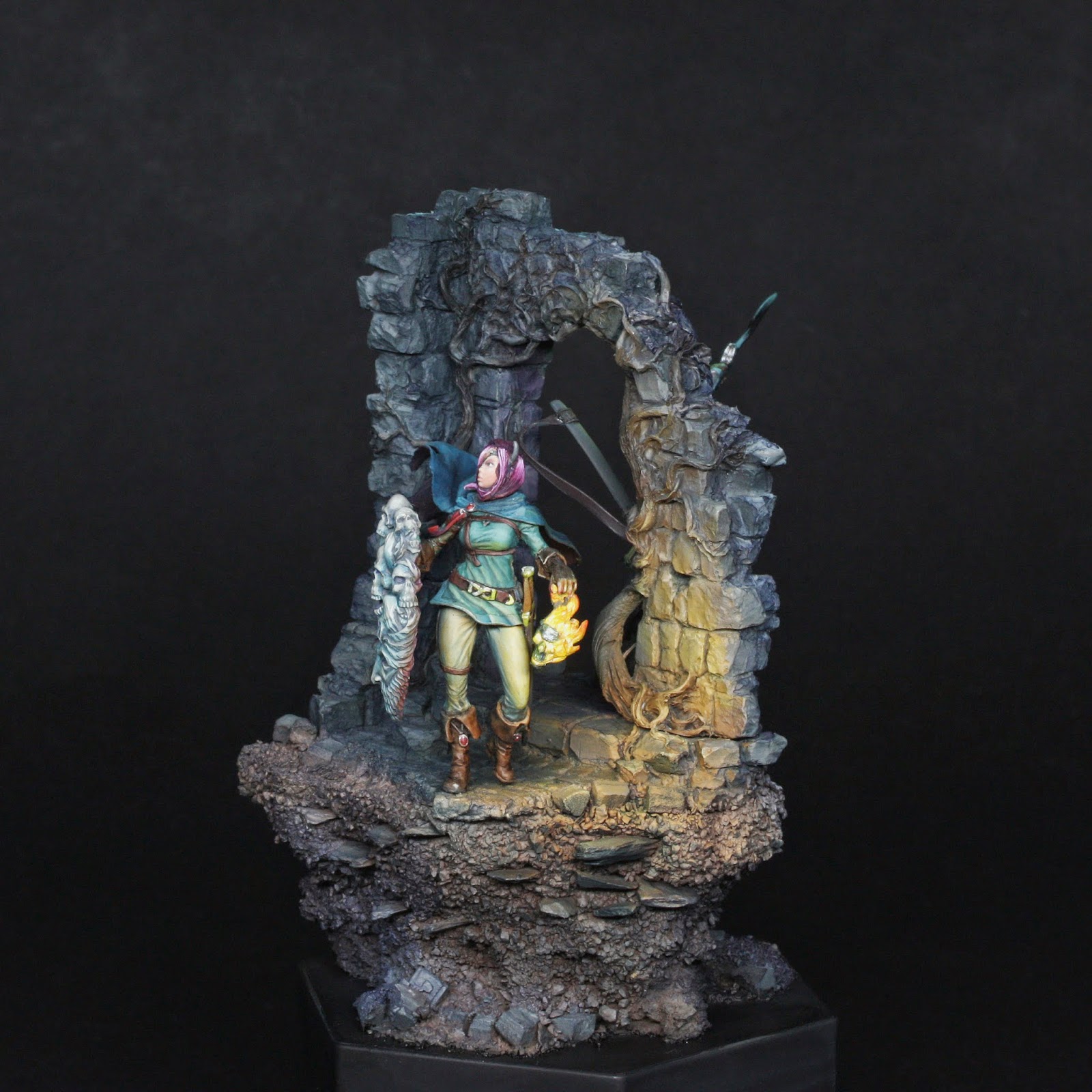 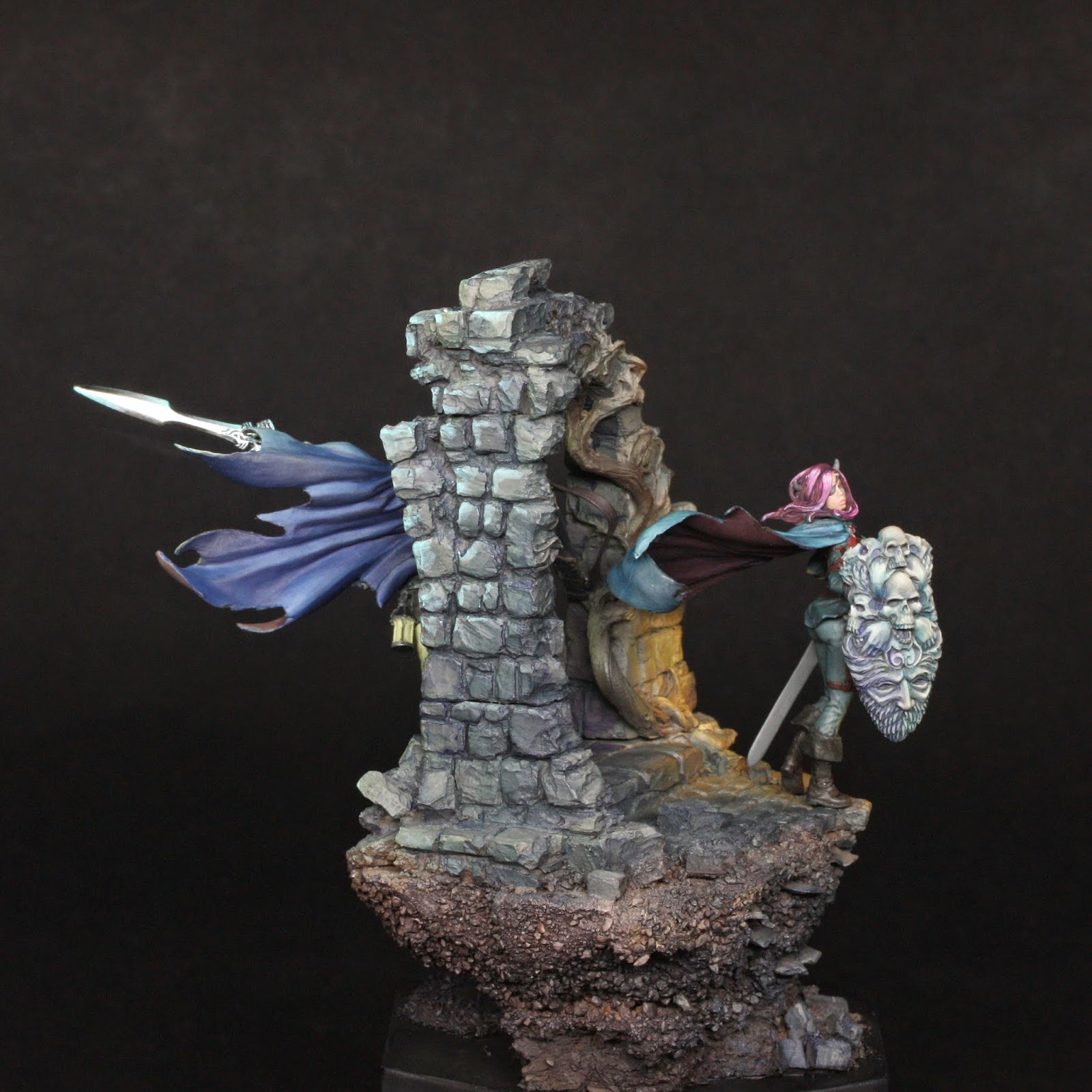 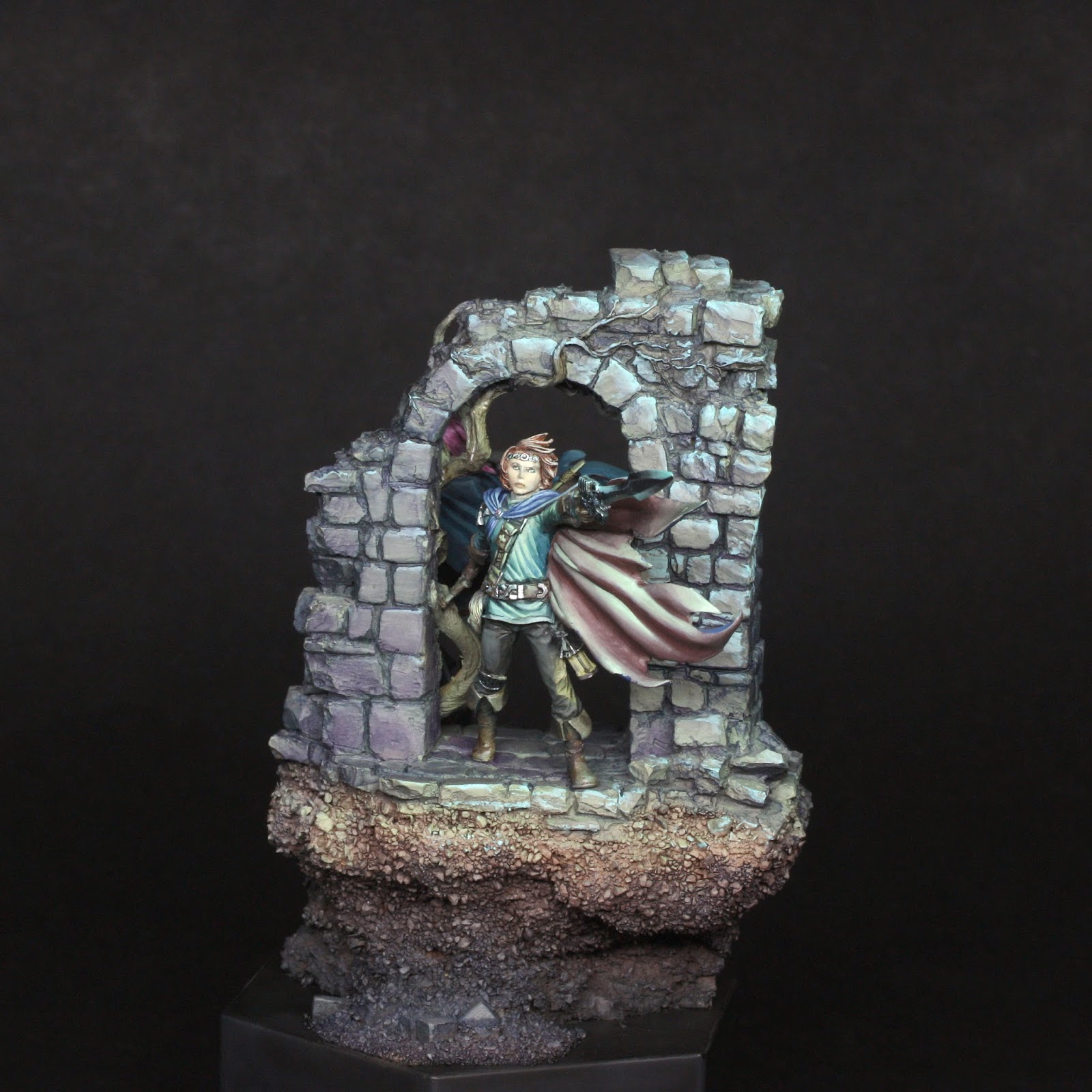 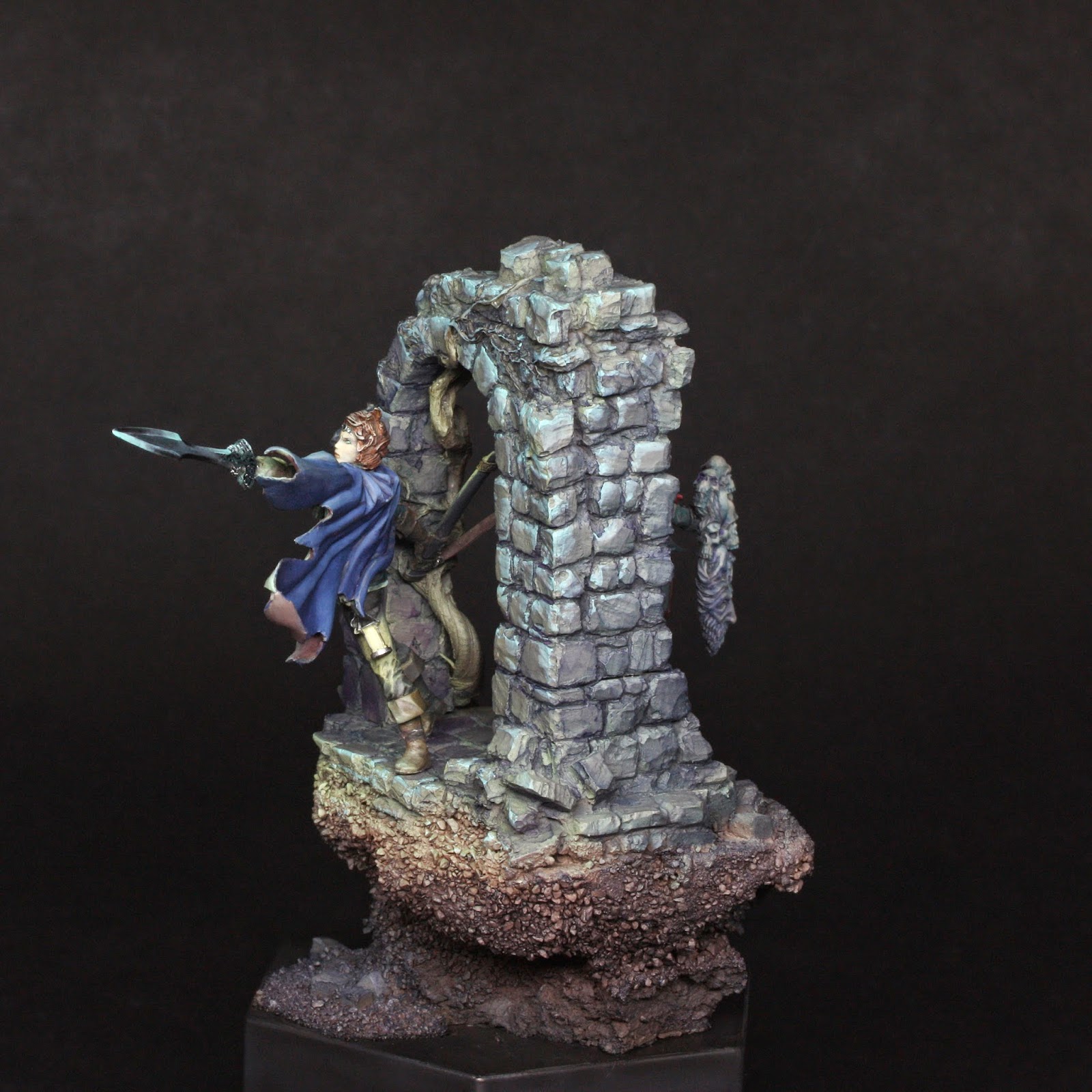 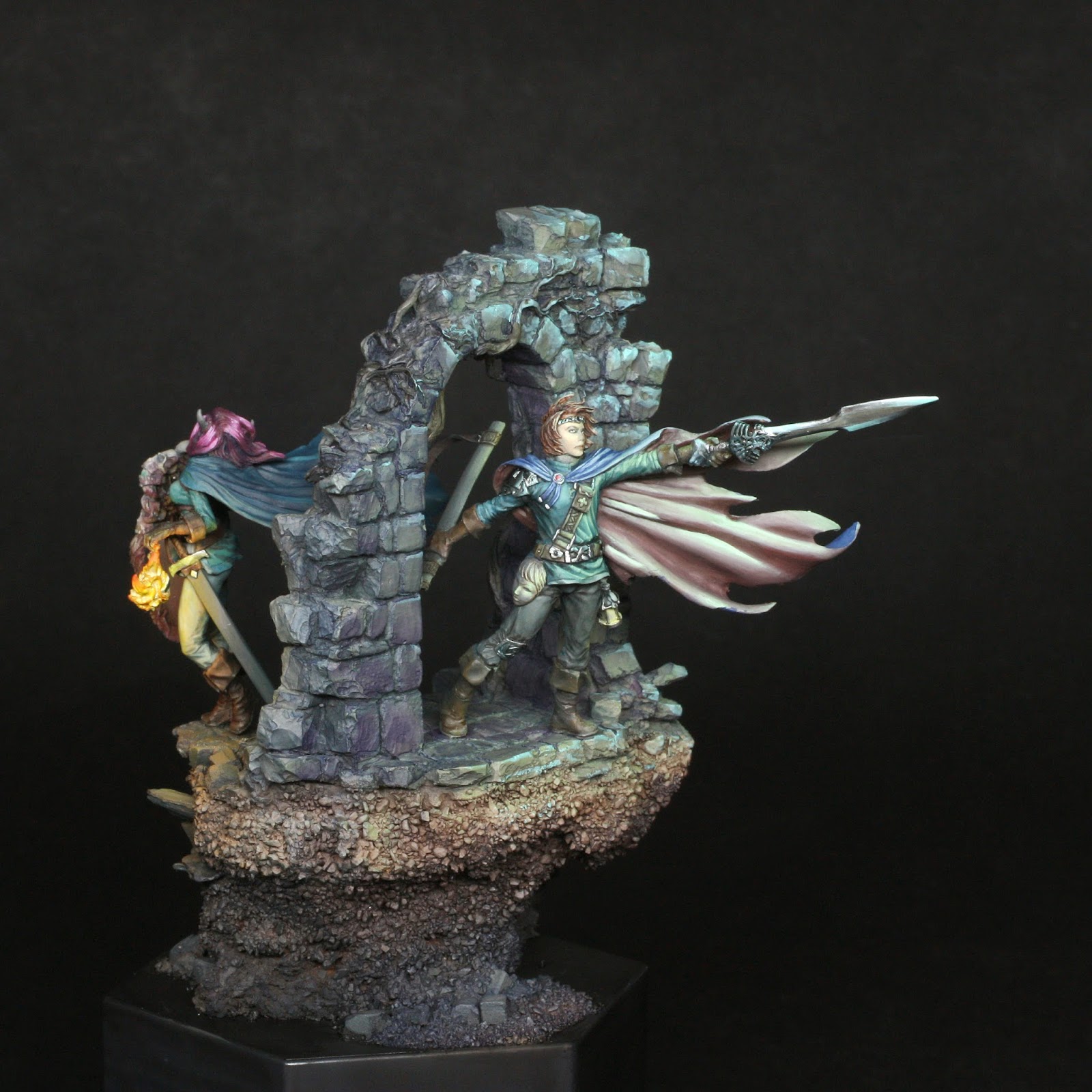 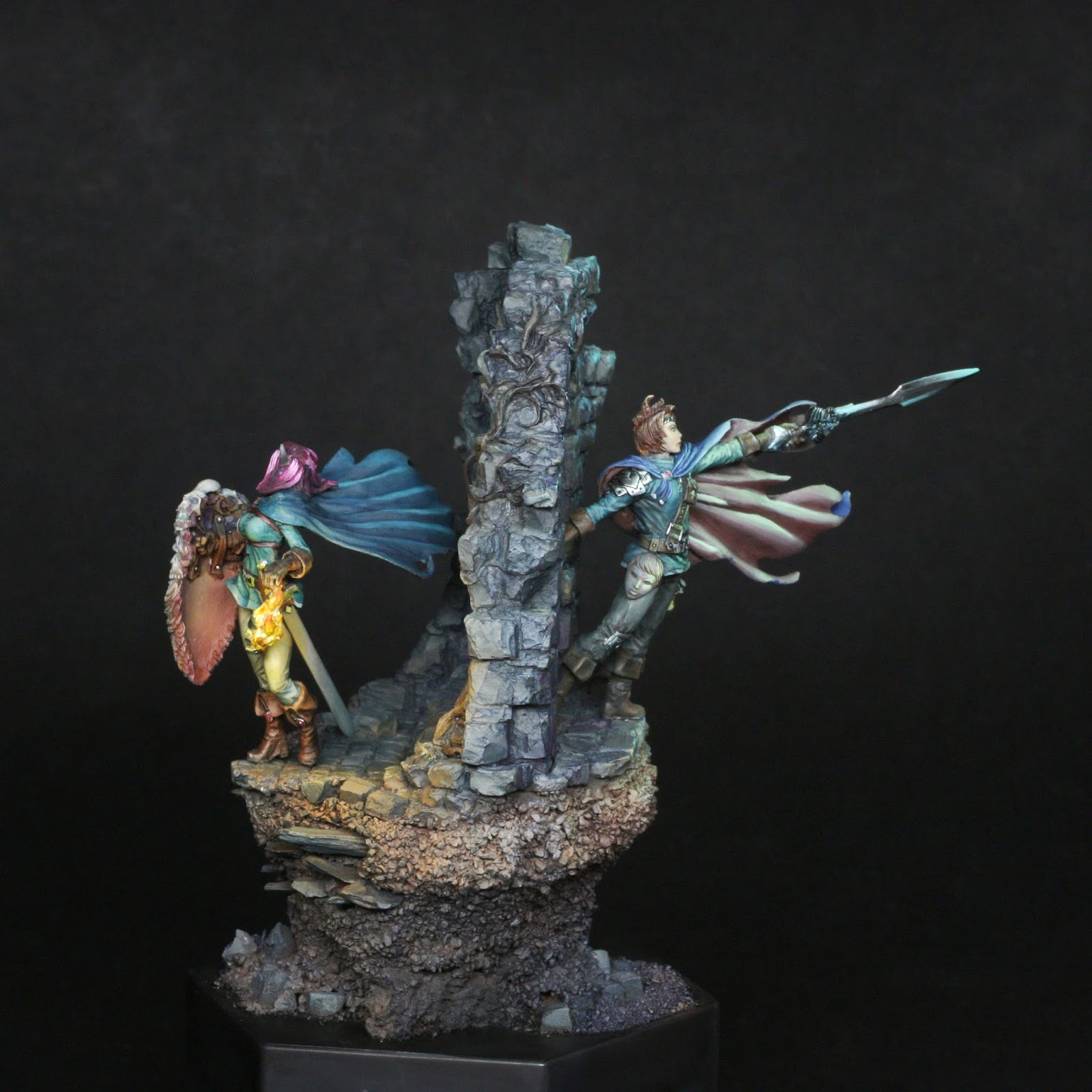 I'm pretty pleased with the final look of this piece as a whole. I've kind of deliberately left some of the brushwork a little "loose" at times, and then sharpened the more important details, and I'm particularly pleased with the warmer glow of the two lanterns. All in all it just about looks like what I intended in my head, so it's all good!


The other Kingdom Death piece that has been on the desk is the Lion God, who has so far still only been worked on with the airbrush. I've enjoyed messing around with consistencies to create glazes, particularly with inks. I am quite looking forward to getting the actual brush onto him, but doing so much with the airbrush sees so much more progress, and should hopefully mean that I'll have just the detailing, final highlights and shades, plus maybe adding some additional points of interest. Whatever I do, this is a superb (and of course weird) sculpt to paint... 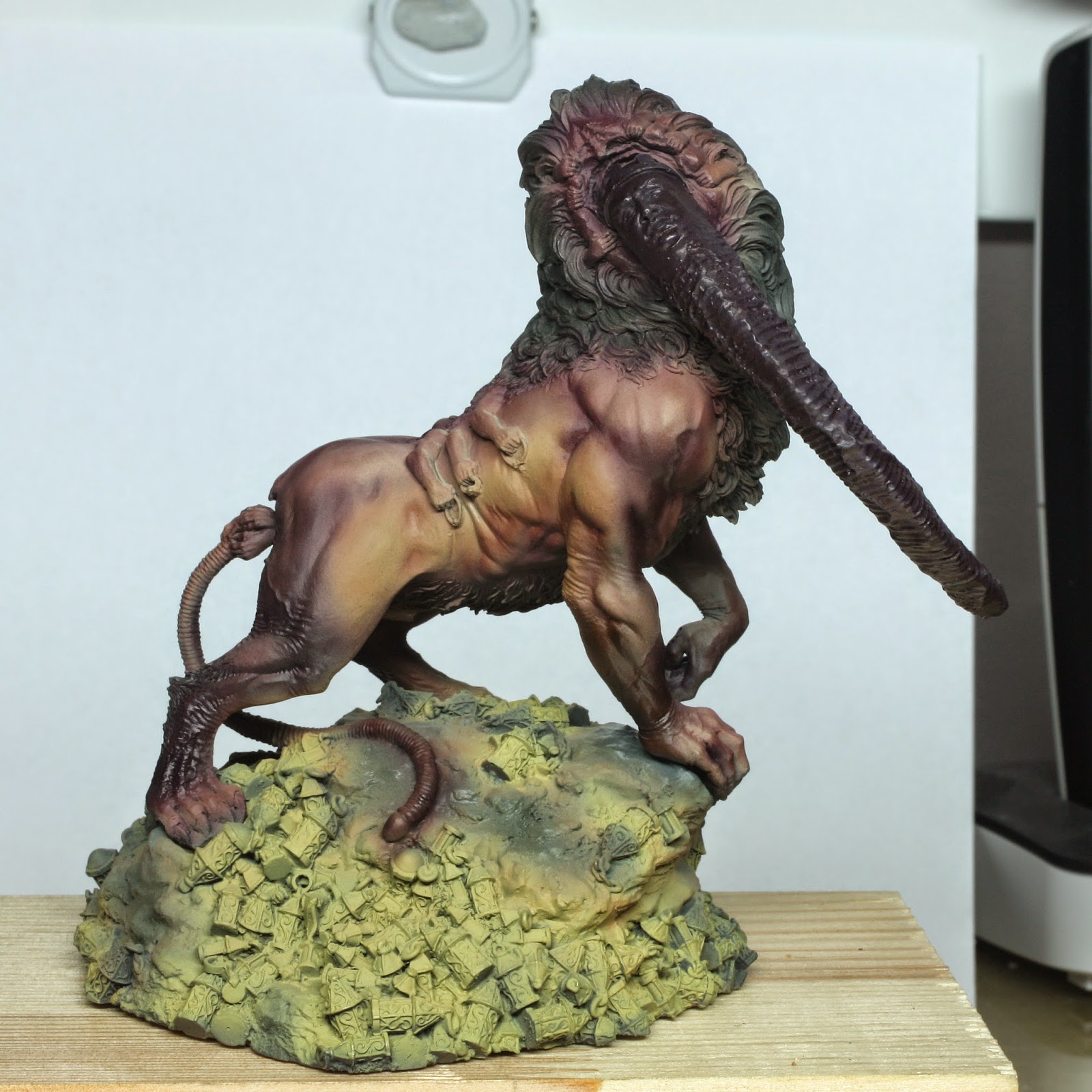 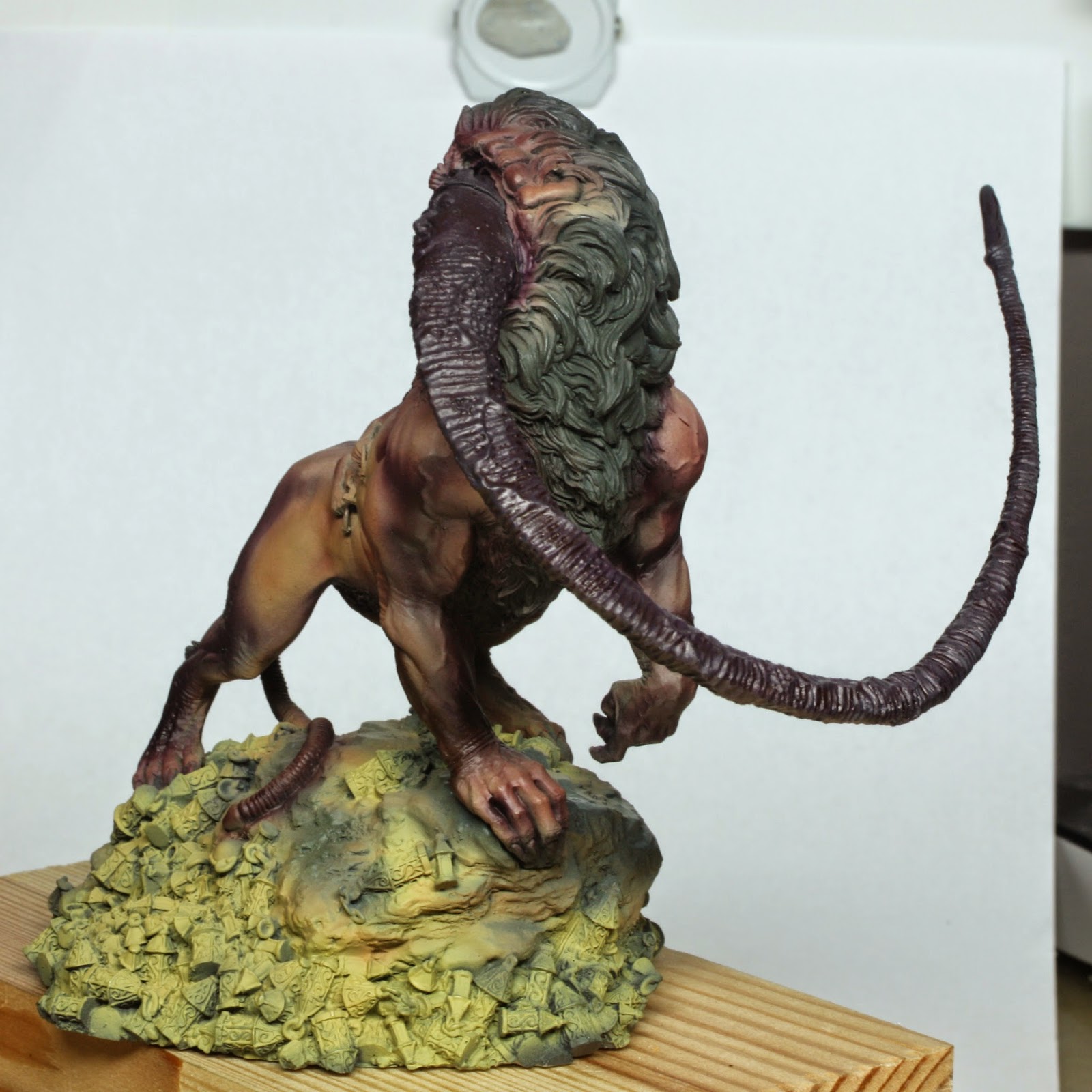 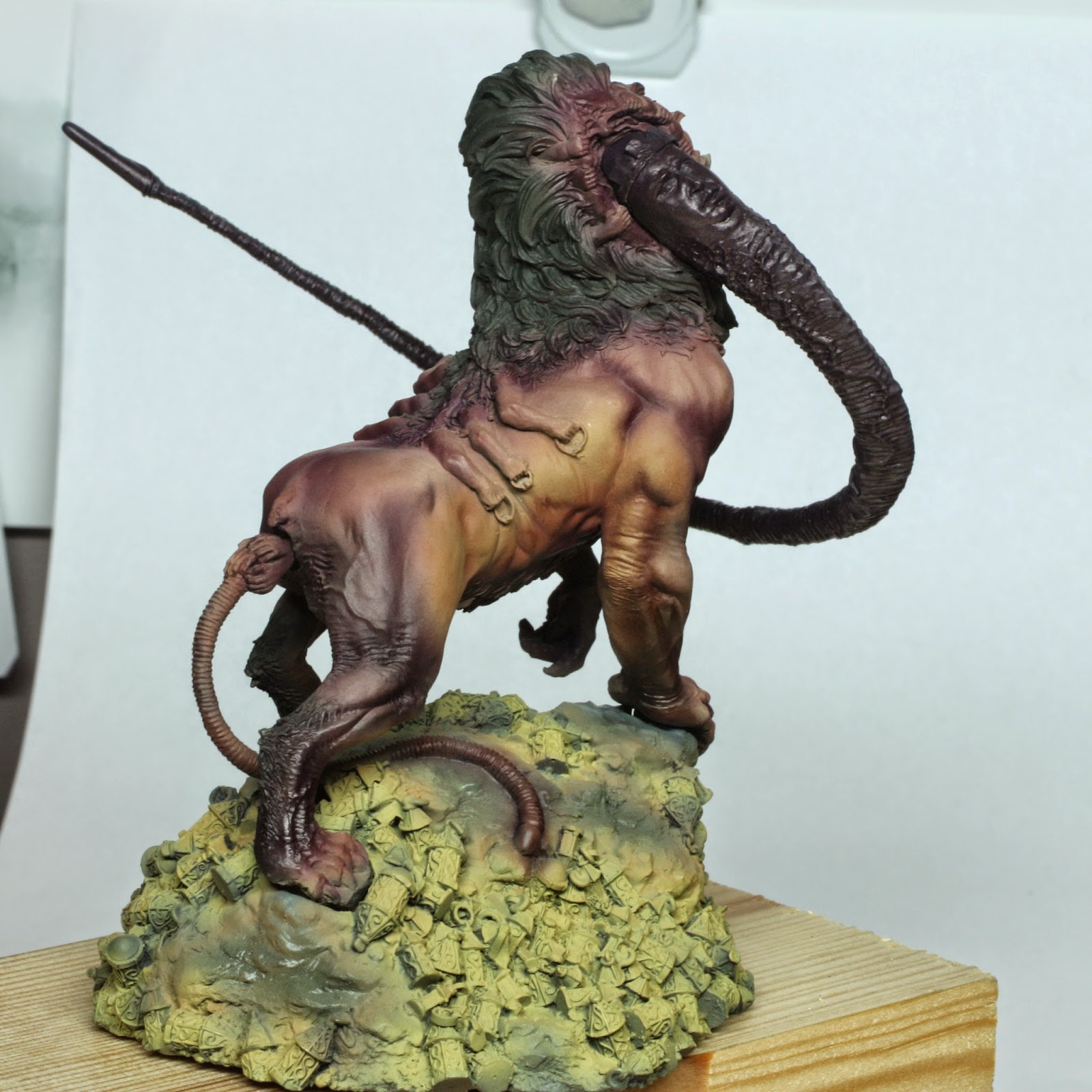 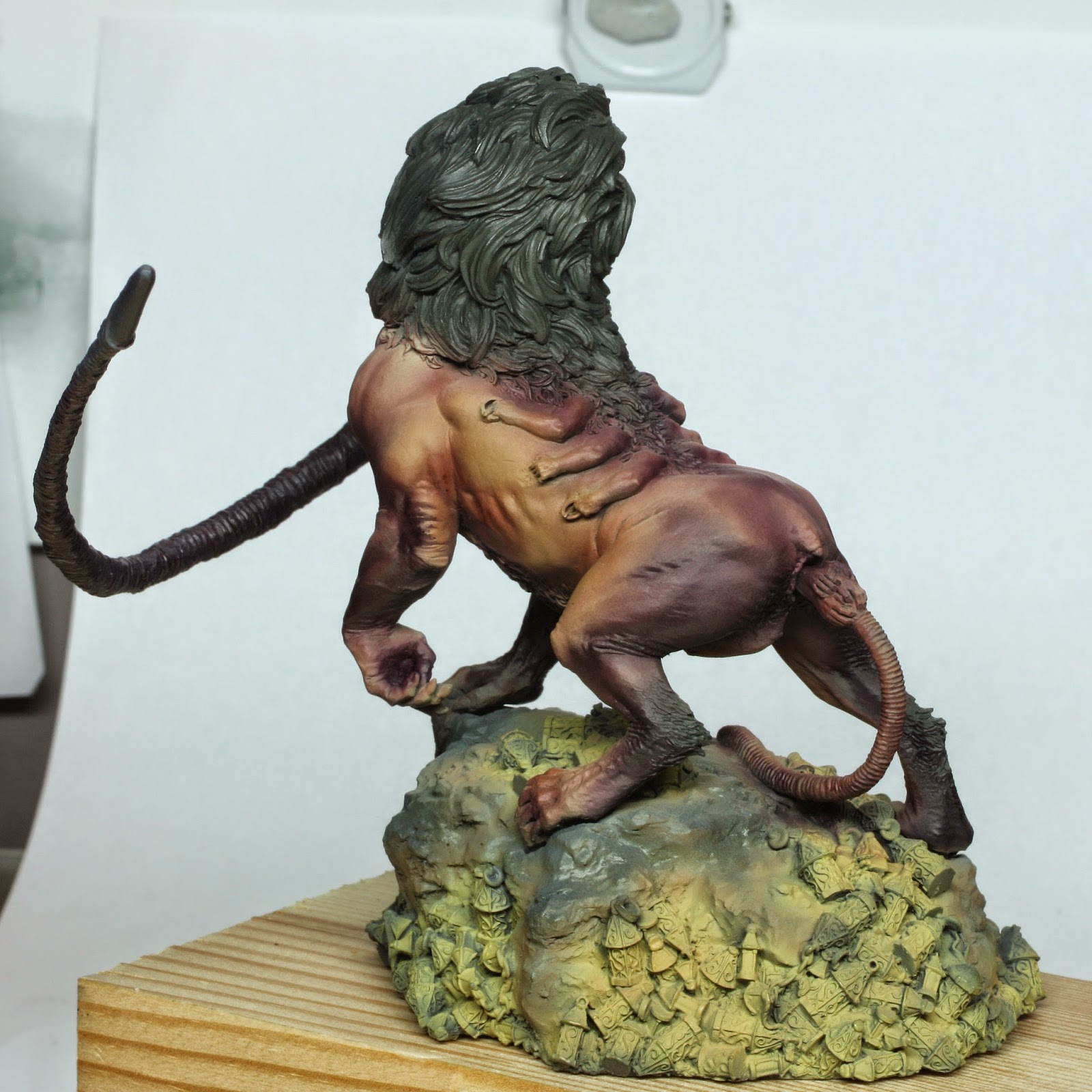 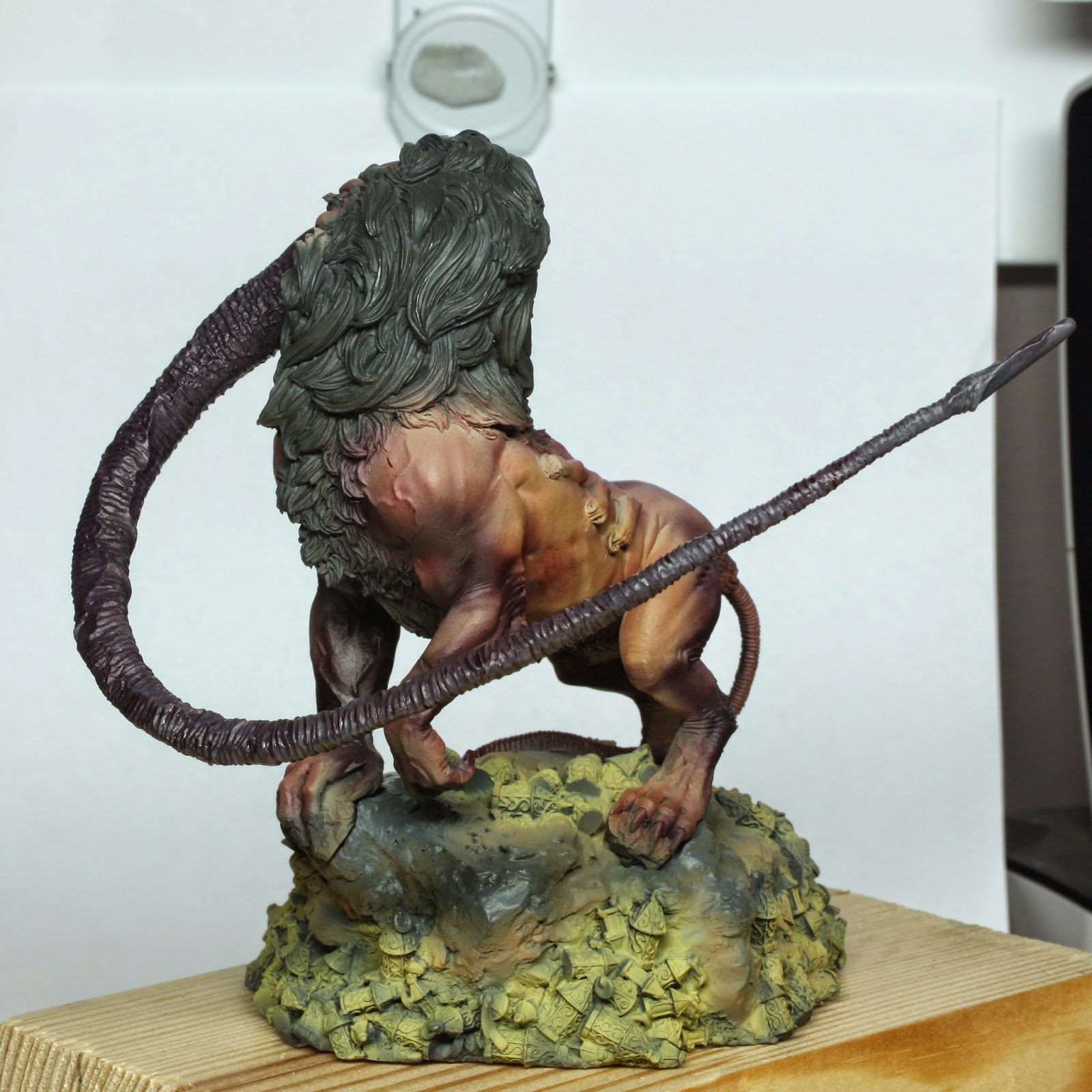 I may or may not keep working on him exclusively in the short term, but I've been rummaging in the box of unpainted toys and decided on the next two that I shall definitely work on. In an odd coincidence it appears that I've gone for two randomly apostrophe strewn sculpts in M'Dusa - a soon to be released Seb Archer sculpt for Twisted Games that I was given at Salute this year; and Shido'ni - a one-off sculpt by Christian Hardy... 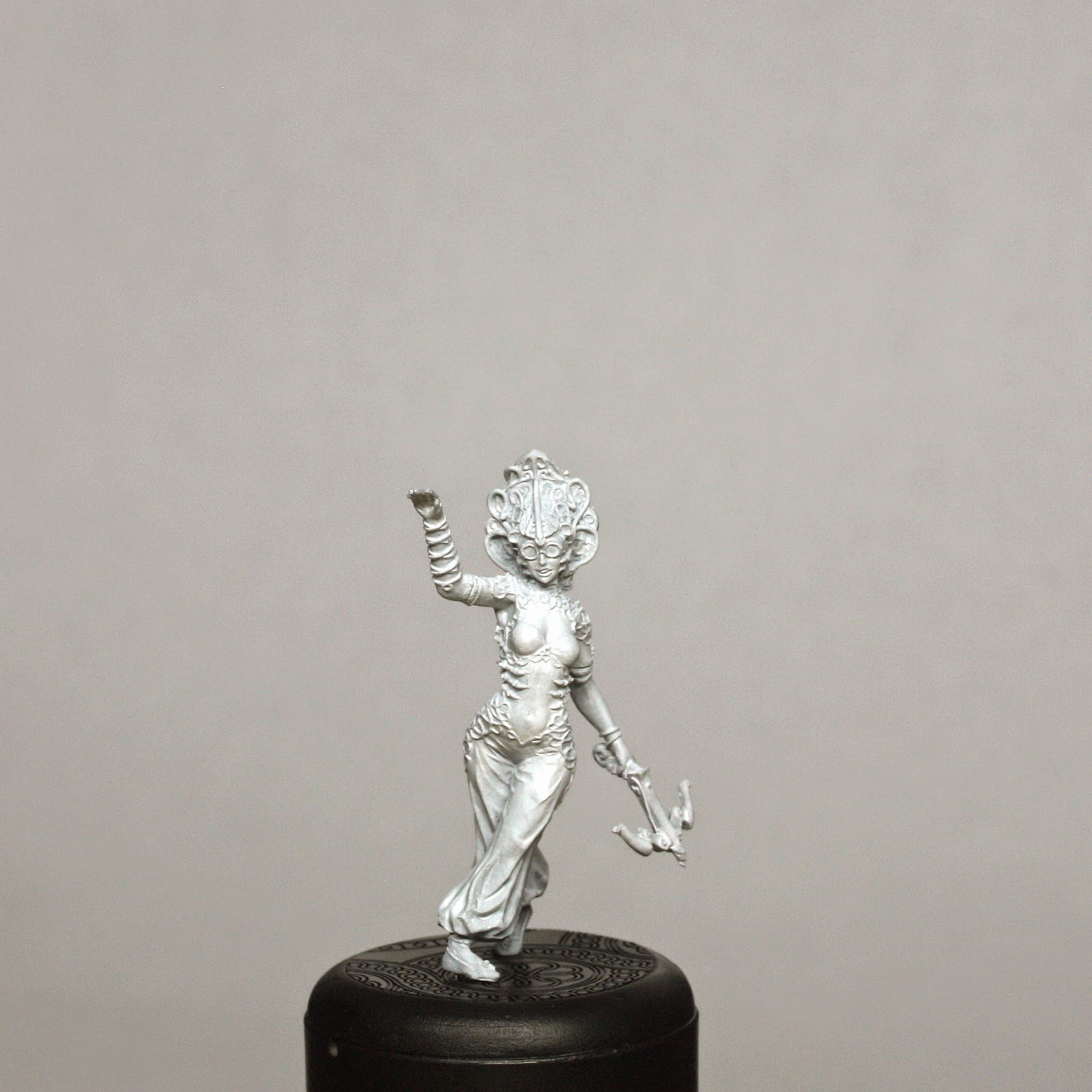 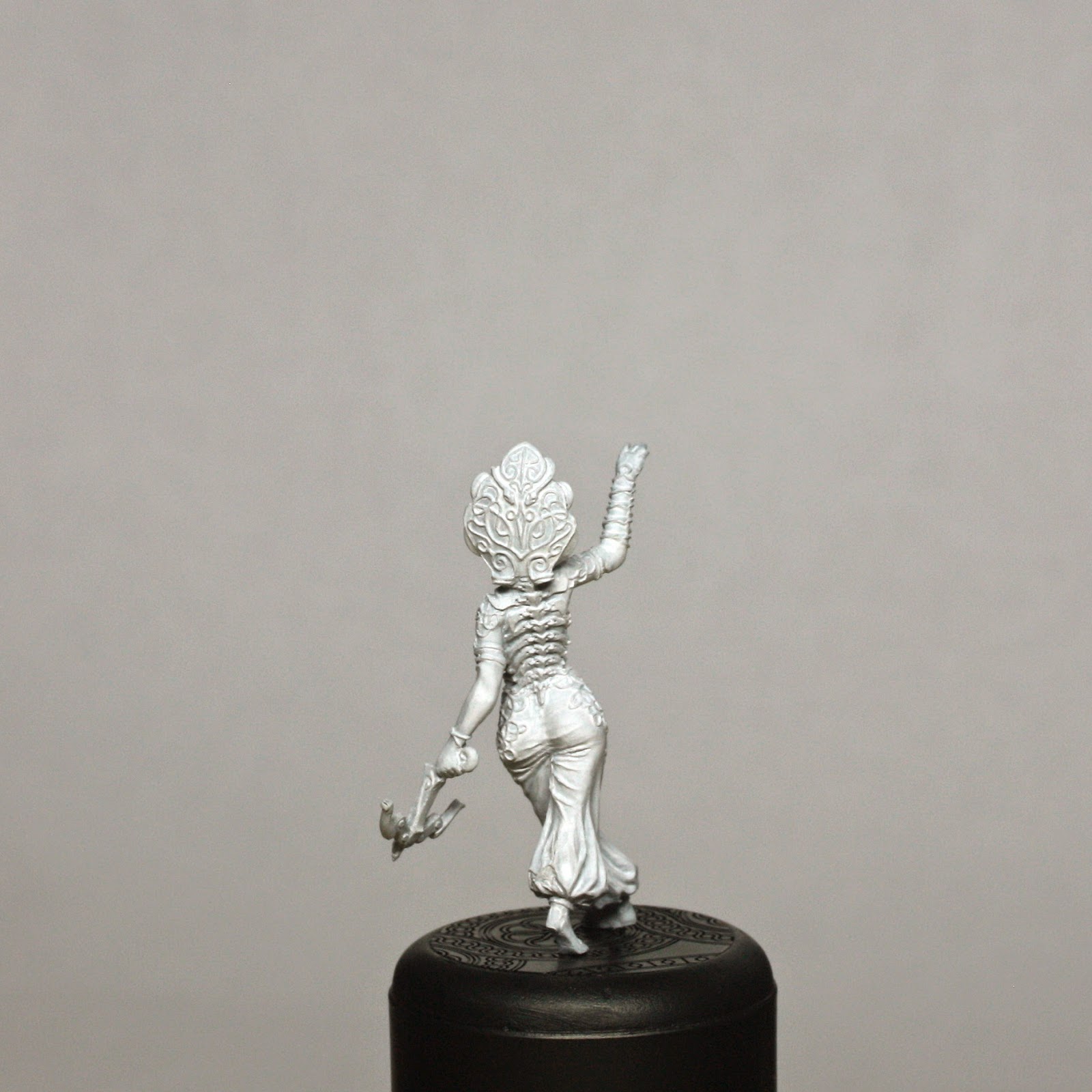 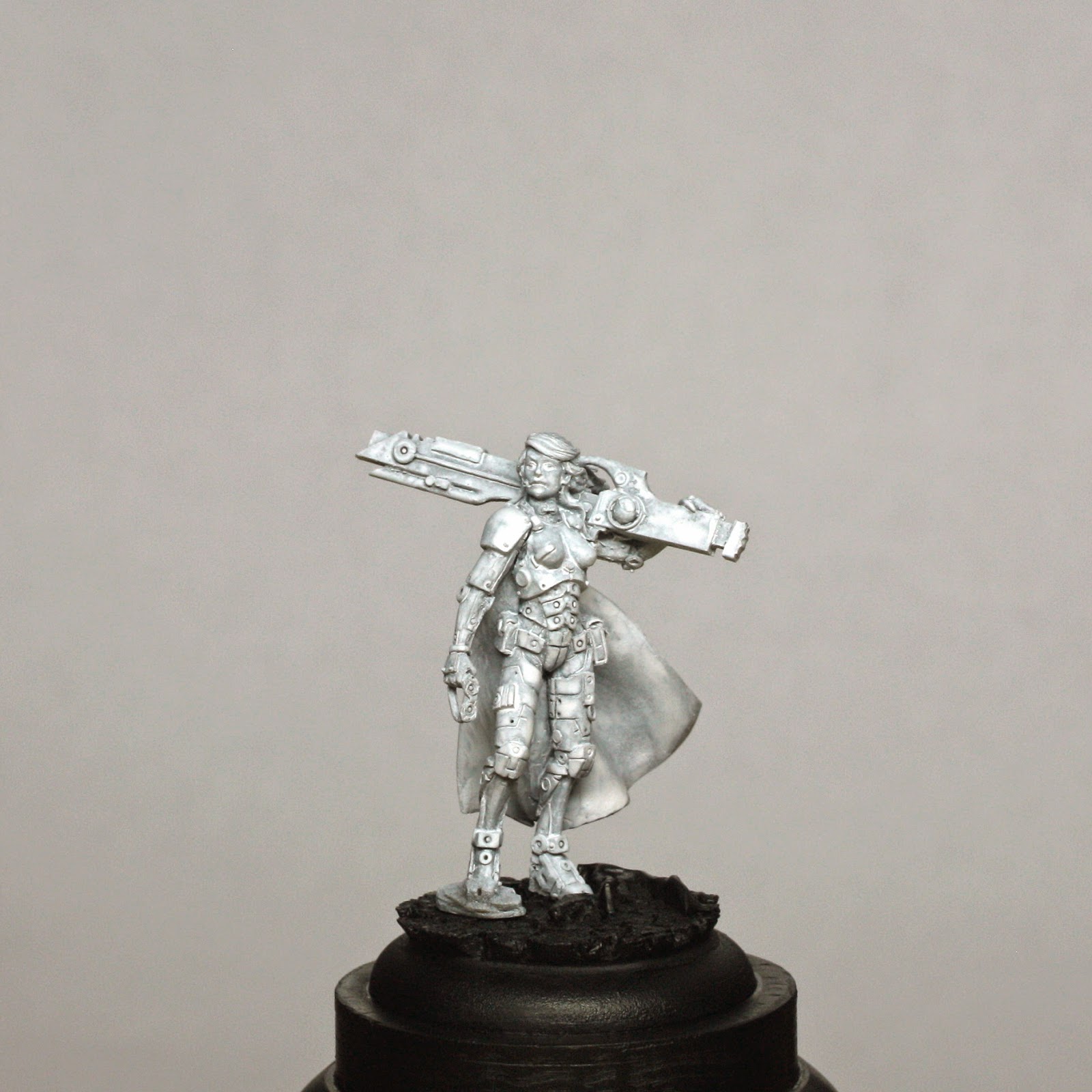 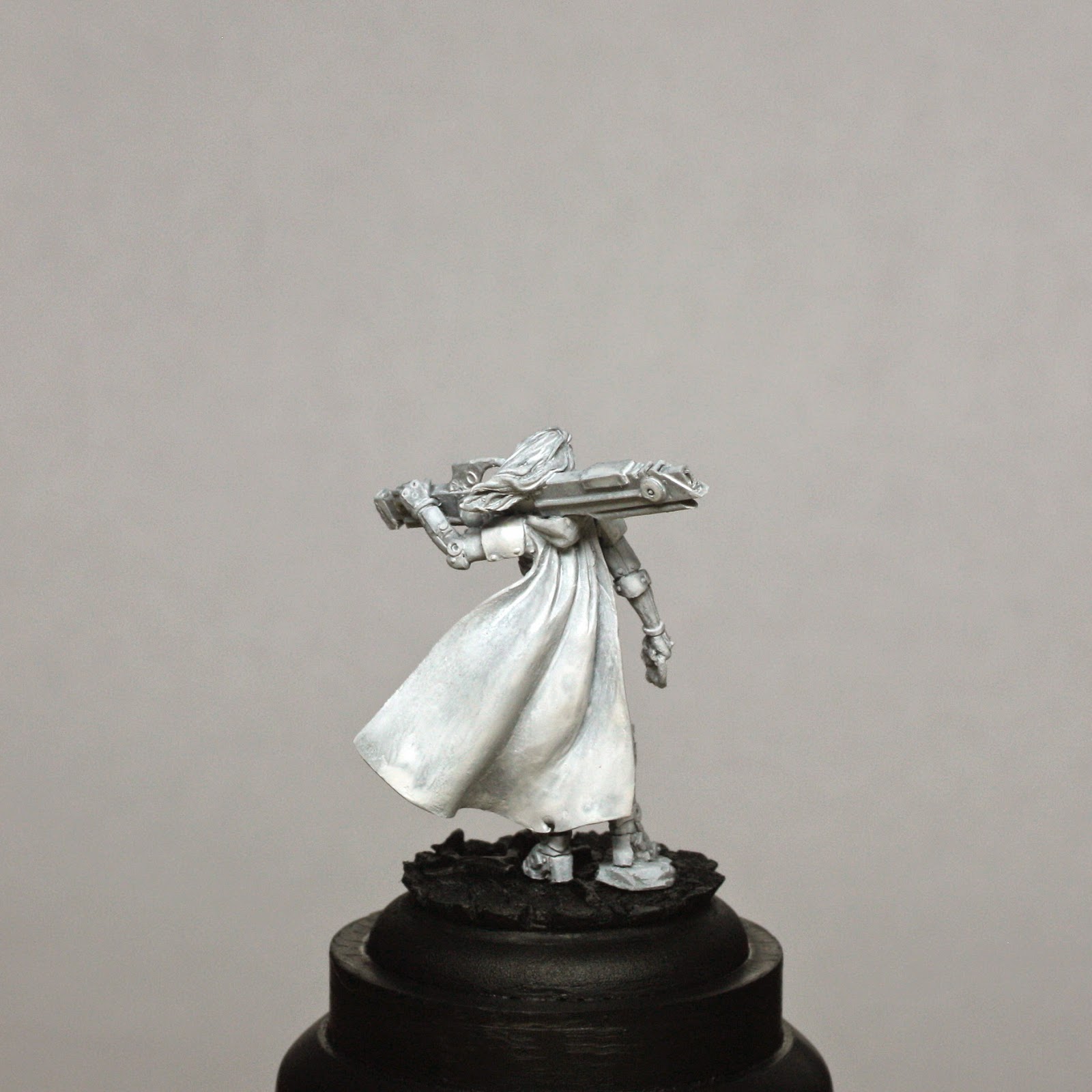 Both should be reasonably challenging "technical" paint jobs, because both have plenty of really intricate details.
M'Dusa I've not decided on a scheme yet, but I'm thinking of a luxuriant red or purple in there somewhere. Shido'ni will be more sandy colours, I think. I will also probably look at putting goggle marks on her face, as she is carrying a set in her hand. O-O

After these two, I have 3 pieces in mind that I am quite excited about. All 3 are slightly larger scale and fairly different too.
The first is a very different take on a Wood Elf, by Carmine Giugliano...

The next is Sergeant Blackart's Kate...

More on her HERE

And finally, Blacksmith Miniatures' Clio & Erato piece, which I am particularly looking forward to, plus they are running a Facebook competition for painted versions of them, so I've tagged onto that too...

That's about all for this instalment, other than to say to keep an eye out for FIGURE PAINTER MAGAZINE's next release in the next few days, as there is an interview with yours truly. Oh, and look out for the next Kingdom Death news letter (and their gallery page), as I think that there may be another pinup article (or two, or three!!)

So, for now, Happy Time Off Time! I'm gonna go practice my sleeping ready for next week! ^_^
Posted by Unknown at 00:03