Where do we glow from here...?

I'm not sure whether I've made lots of progress or not much at all since my last post. The two Kingdom Death pieces that I showed in the last post both have paint on them, that much I can confirm, but I'm not sure whether I've given myself a massive workload to each piece, or made them somehow simpler.
Dealing with each piece individually, I'll start with the Lion God model. I hummed and harred about converting it and also how I would paint it. In the end I've not converted it virtually at all, barring a minor tweak of the face position, which allowed me to get on with priming it.
The colour scheme though was what I needed to decide next, and this essentially hinged on whether the pile of lanterns that he stands upon were to be alight or not...
I've decided that they will. This will make for a rather more complicated paint job, as I will need to work out which parts of the pile create a glow against his underside and go from there. There will then need to be a cold, kind of moonlit contrasting look to the top of him. Should be interesting...
I don't have any new photos though, as it's basically a more grey looking grey than the last set of photos! lol

The Visonaries vignette in comparison has moved on quite a lot more. The size of both this piece and the Lion God has led me to use the airbrush quite extensively up to this point, and in the case of this vignette has given me the opportunity to play with light effects which I shall end up pretty much copying into the Lion God.
In this case I wanted to get two very contrasting light effects into the piece while applying an overall gloomy, twilight kind of feel to the scene. To this end I wanted to make the female Visionary's lighting to be predominantly made up from the flaming skull lantern in her hand, with any areas not lit like this to be cool and subdued.
For the male Visionary, I want him to appear in the scene to be leading the pair of them towards some eerie light in the distance, so a green kind of glow is suffusing the other side of the vignette.

First of all I airbrushed the earth and stone tones of the scenery with just a bit of neutral highlighting where I expected light to fall... 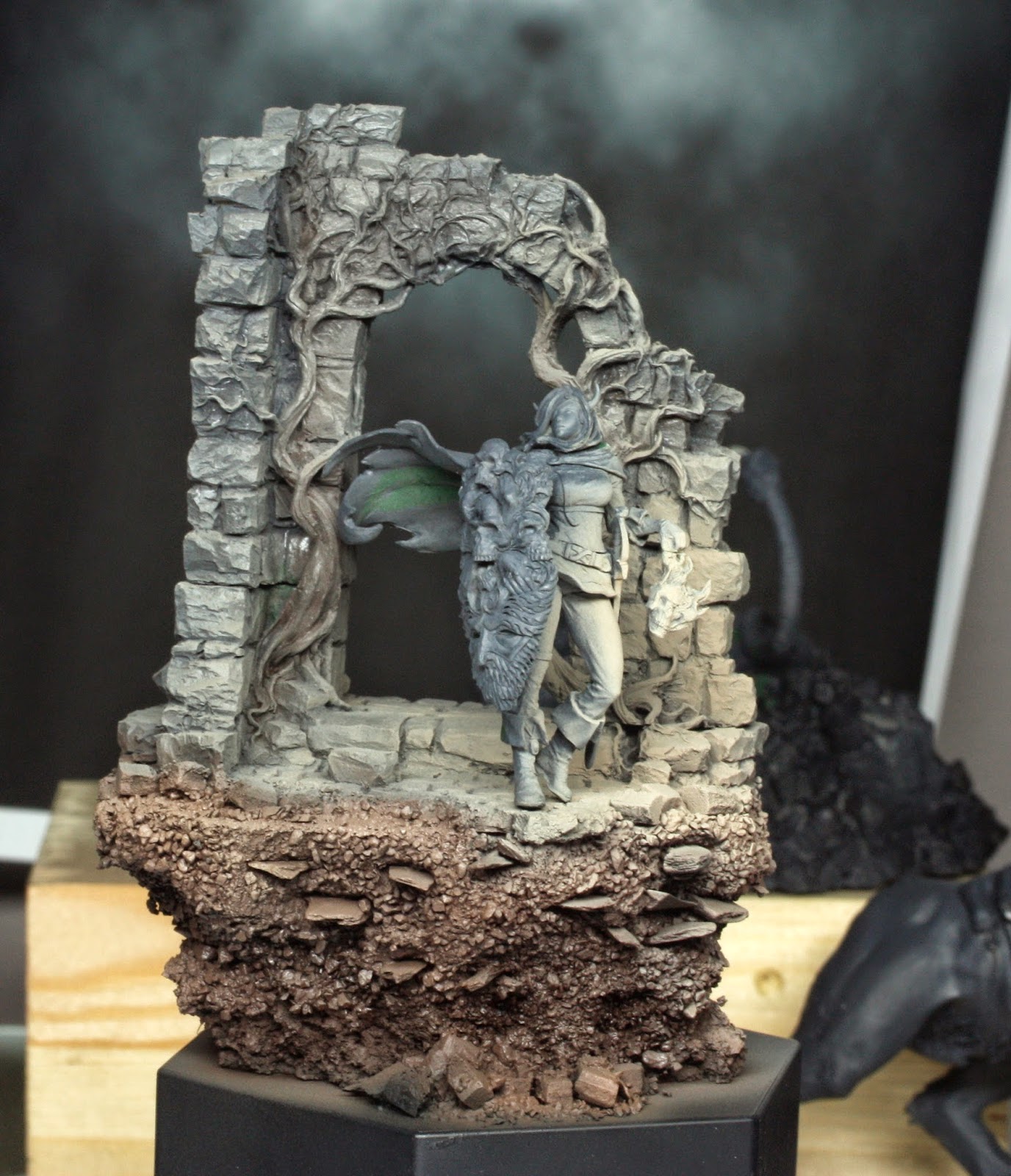 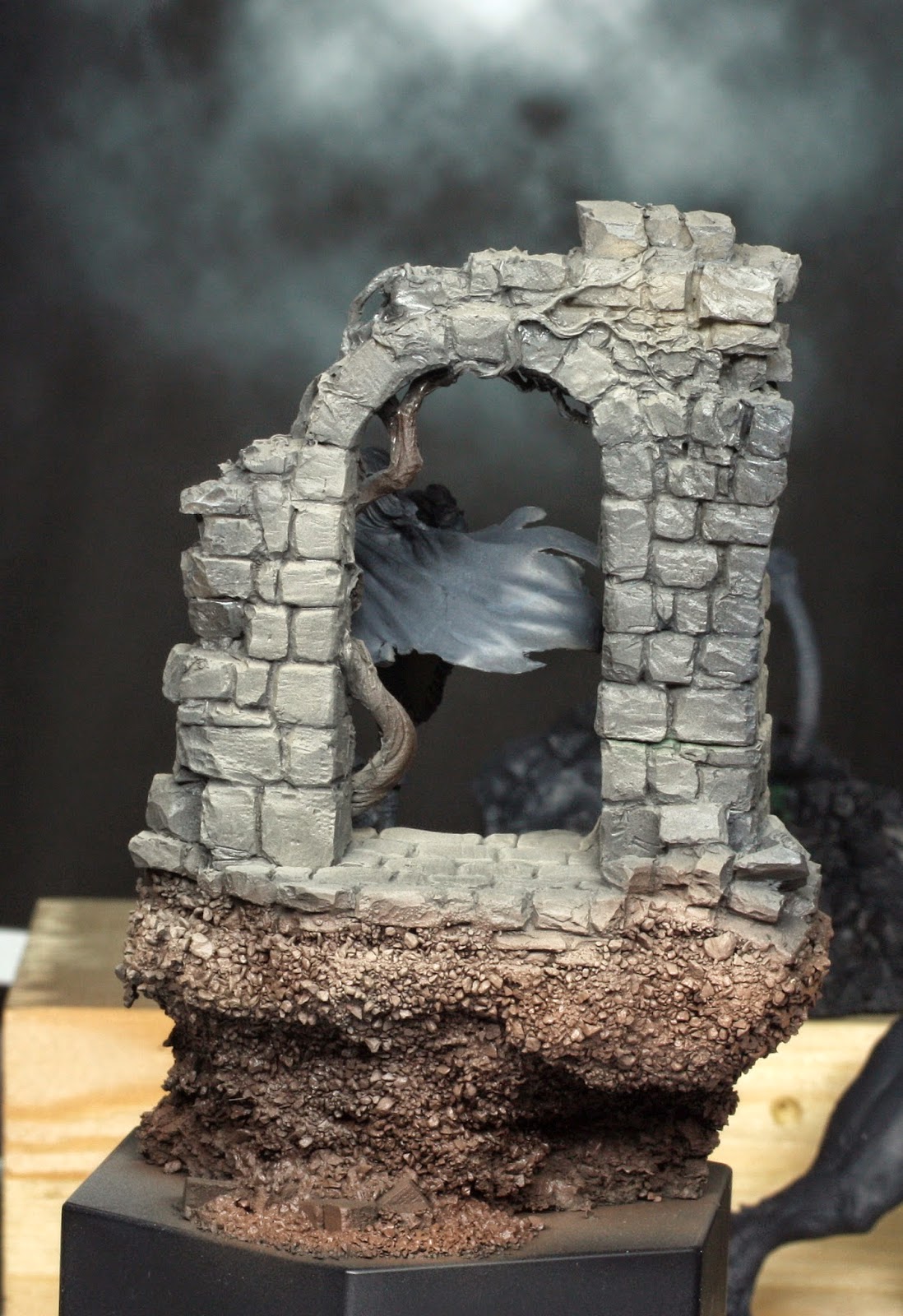 Next I worked in some blueish shading wherever required, picked out the "global" highlight of a pale blue grey colour and added in the green and fiery source lighting (once I had stood both of the models back into the scene... 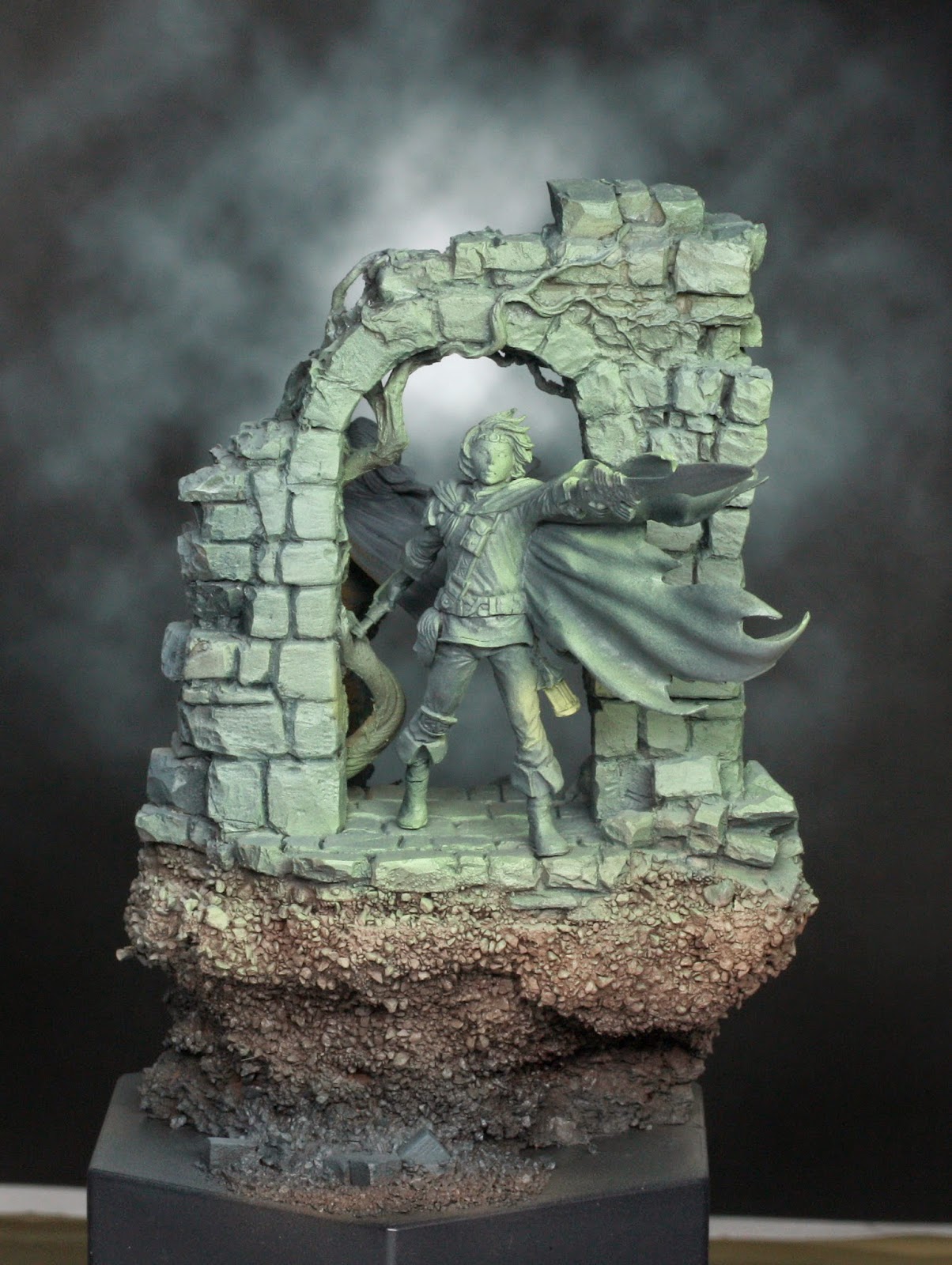 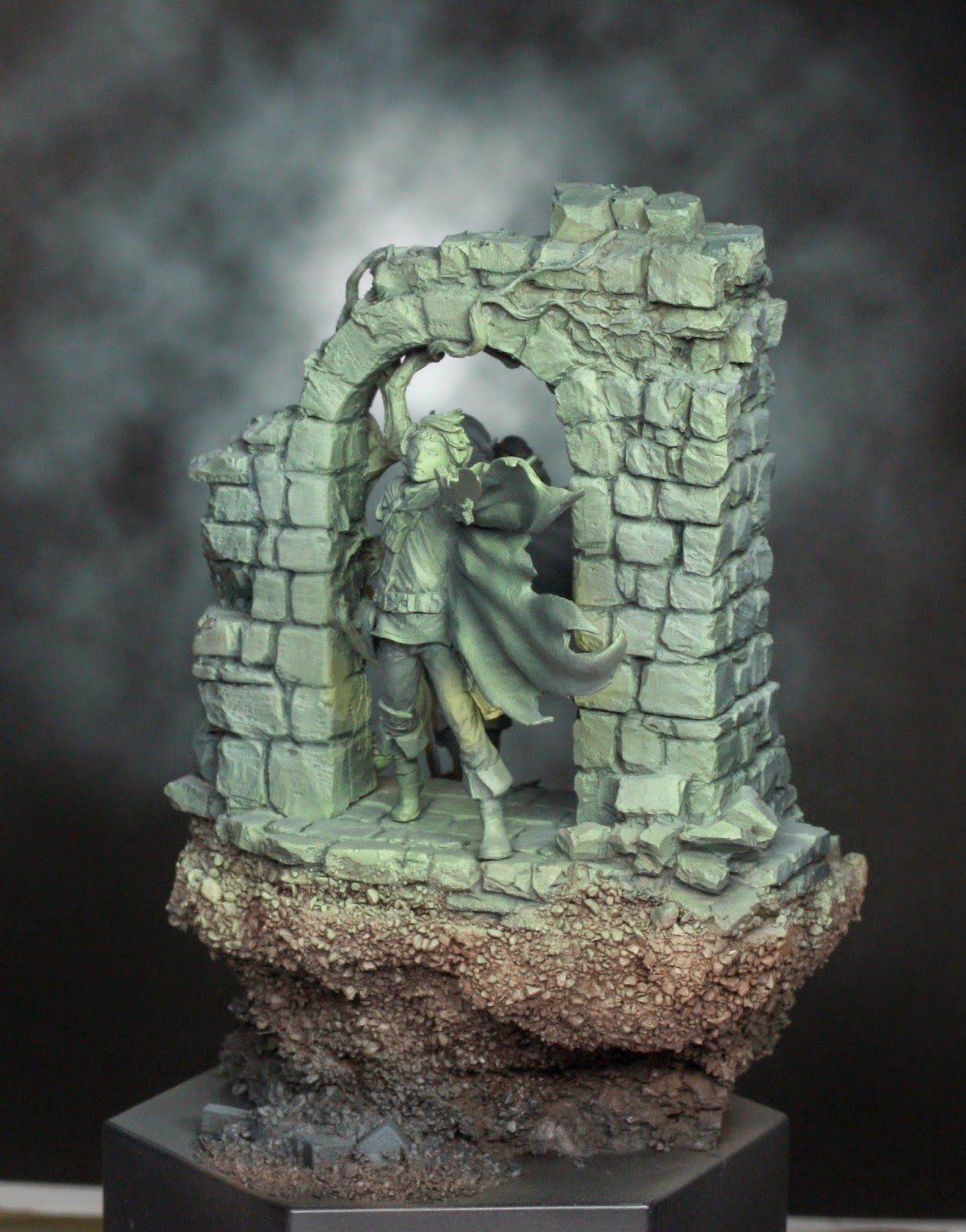 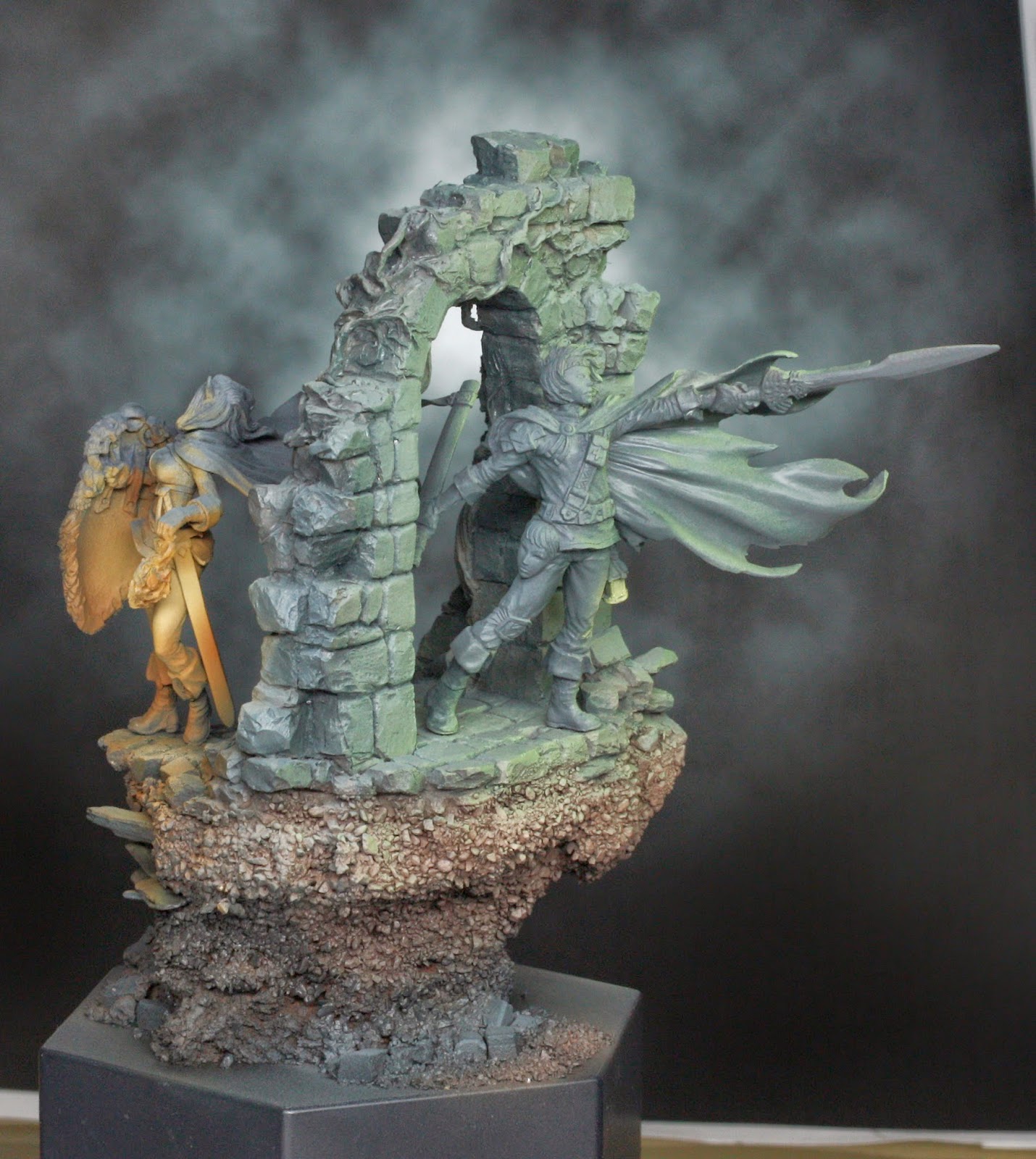 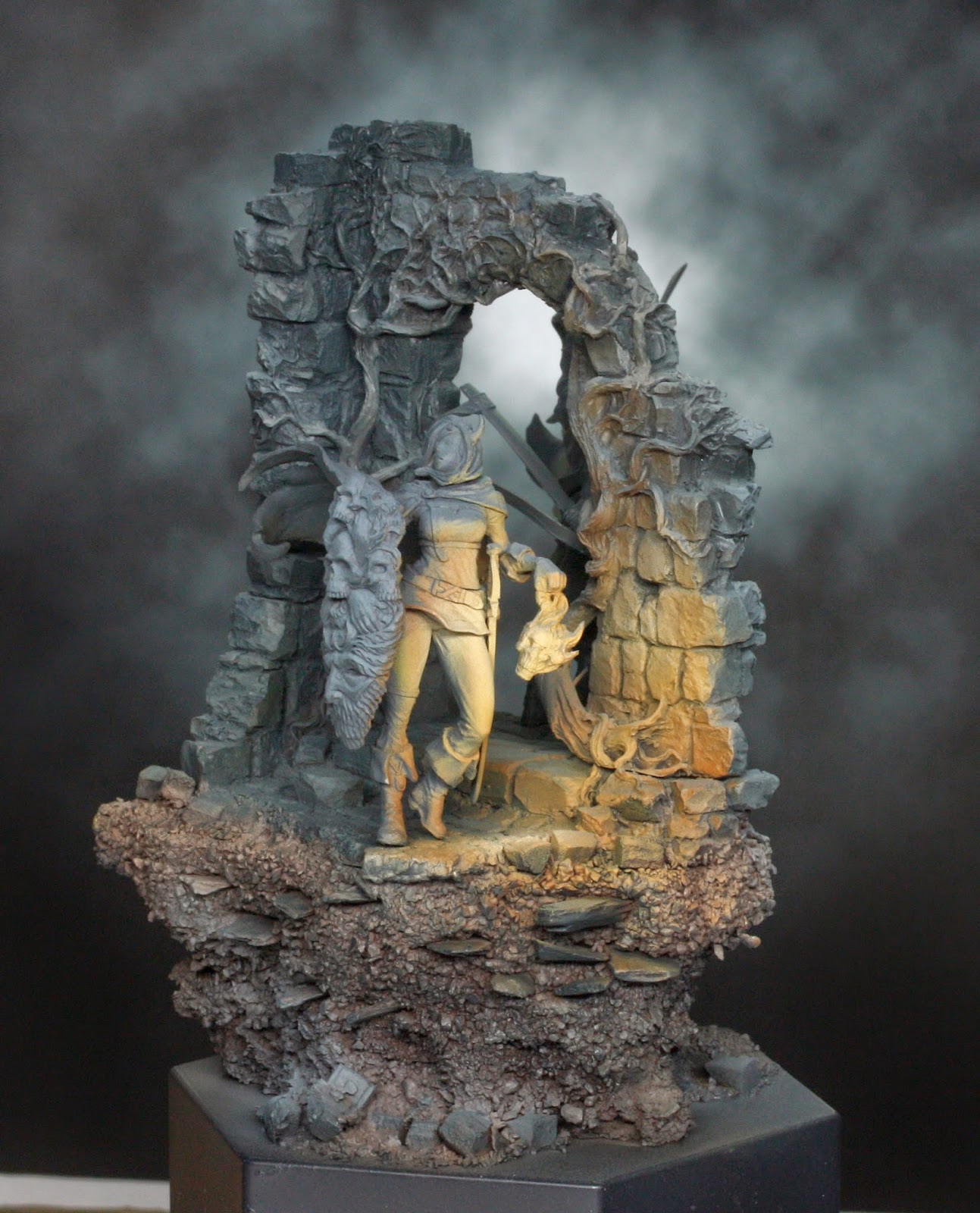 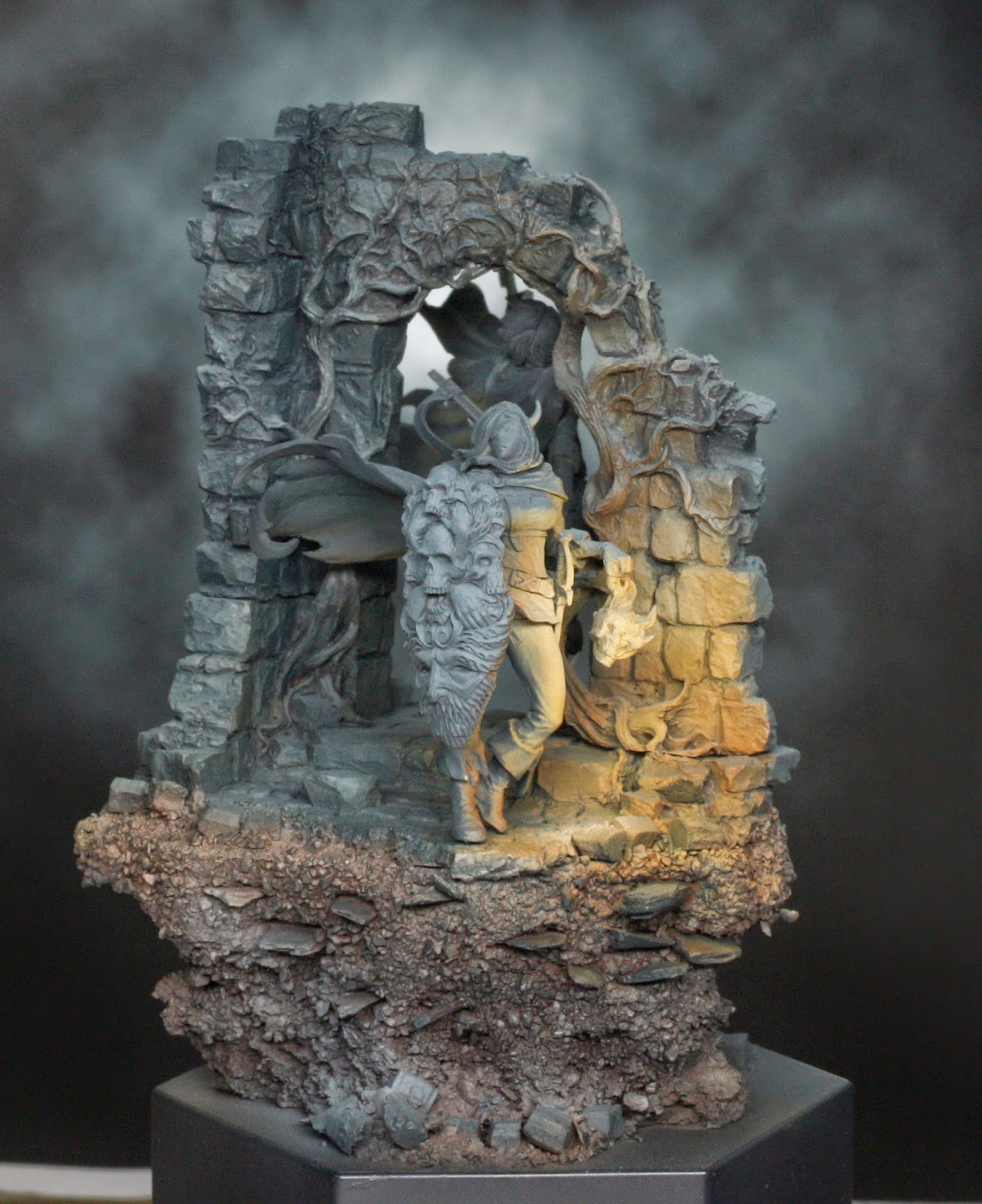 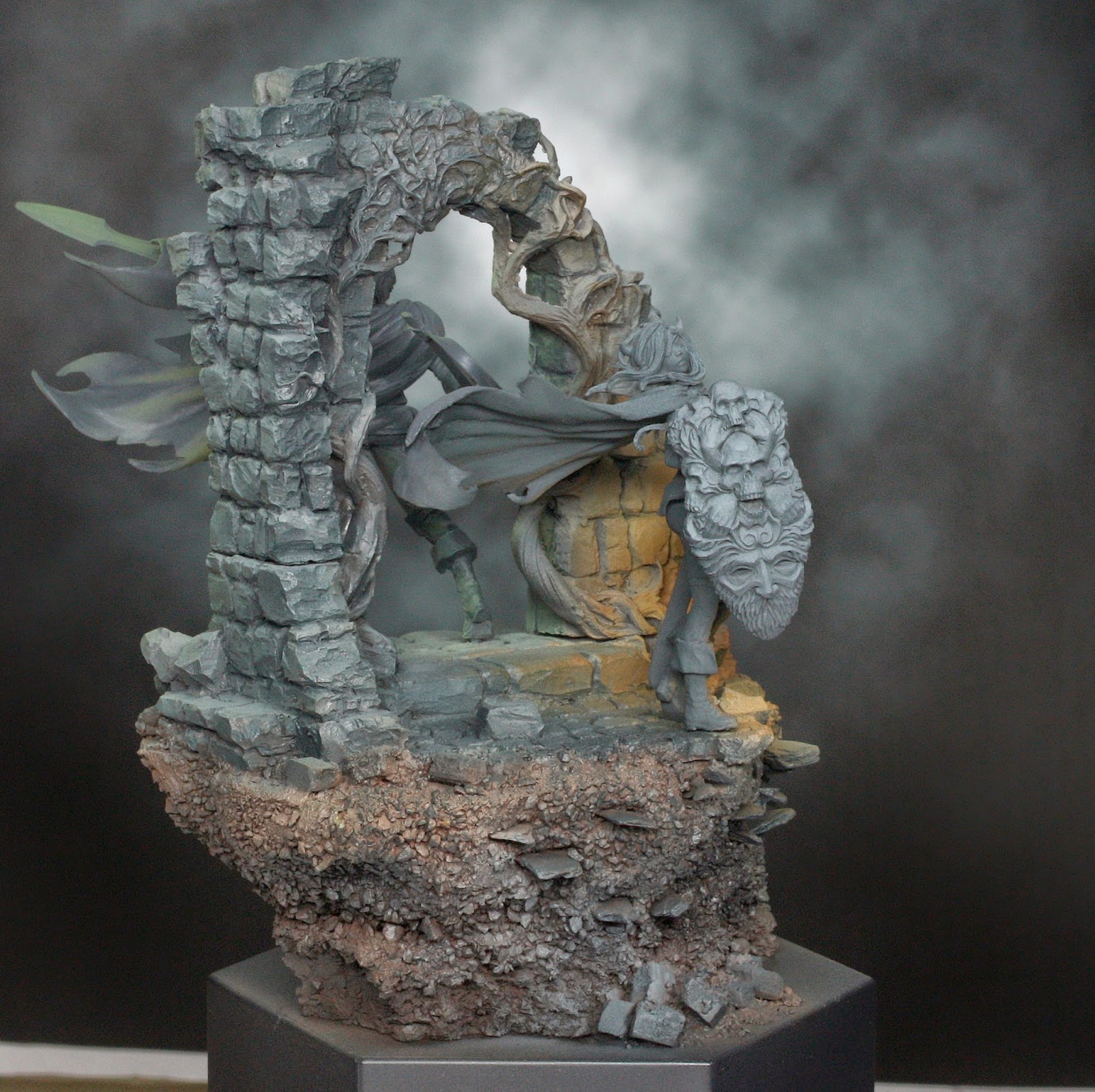 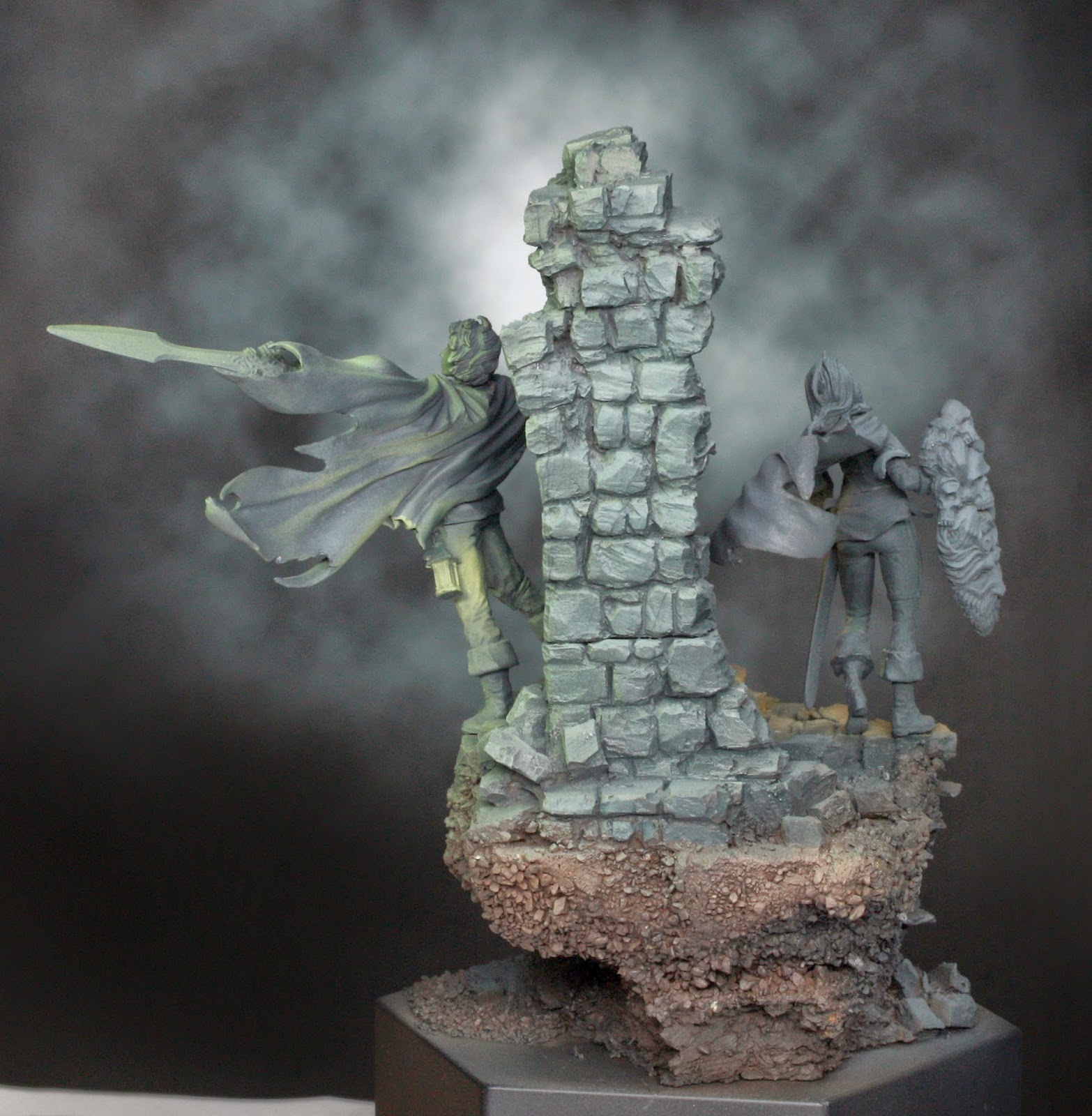 Up to this point I haven't touched the piece with a paintbrush, so I was quite pleased with what I had managed to create in terms of the various textures in the base and the different light effects. All of this was done with Tamiya paints by the way.

Now it is time to get the brushes out and I couldn't resist starting with the female Visionary's shield, which is just superb. I should add at this point that I think that the sculpting of both of these by JAG is just fantastic. I've mentioned in the past that his sculpting of the starting survivors for Monster are fantastic and characterful, and these two are equally as impressive.
The shield in the scene isn't getting any source lighting to the front of it, so I used a slightly warm grey (VMC Medium grey and VMC Panzer Aces Splinter Base) to highlight, and then I used Scale colour inks - blue, violet, green and red - to varying degrees to add a bit of interest to the shading of the shield... 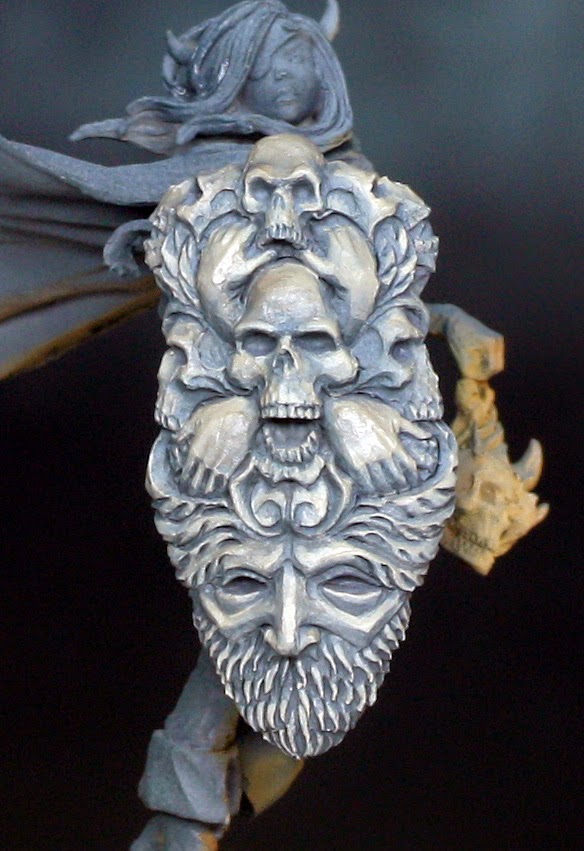 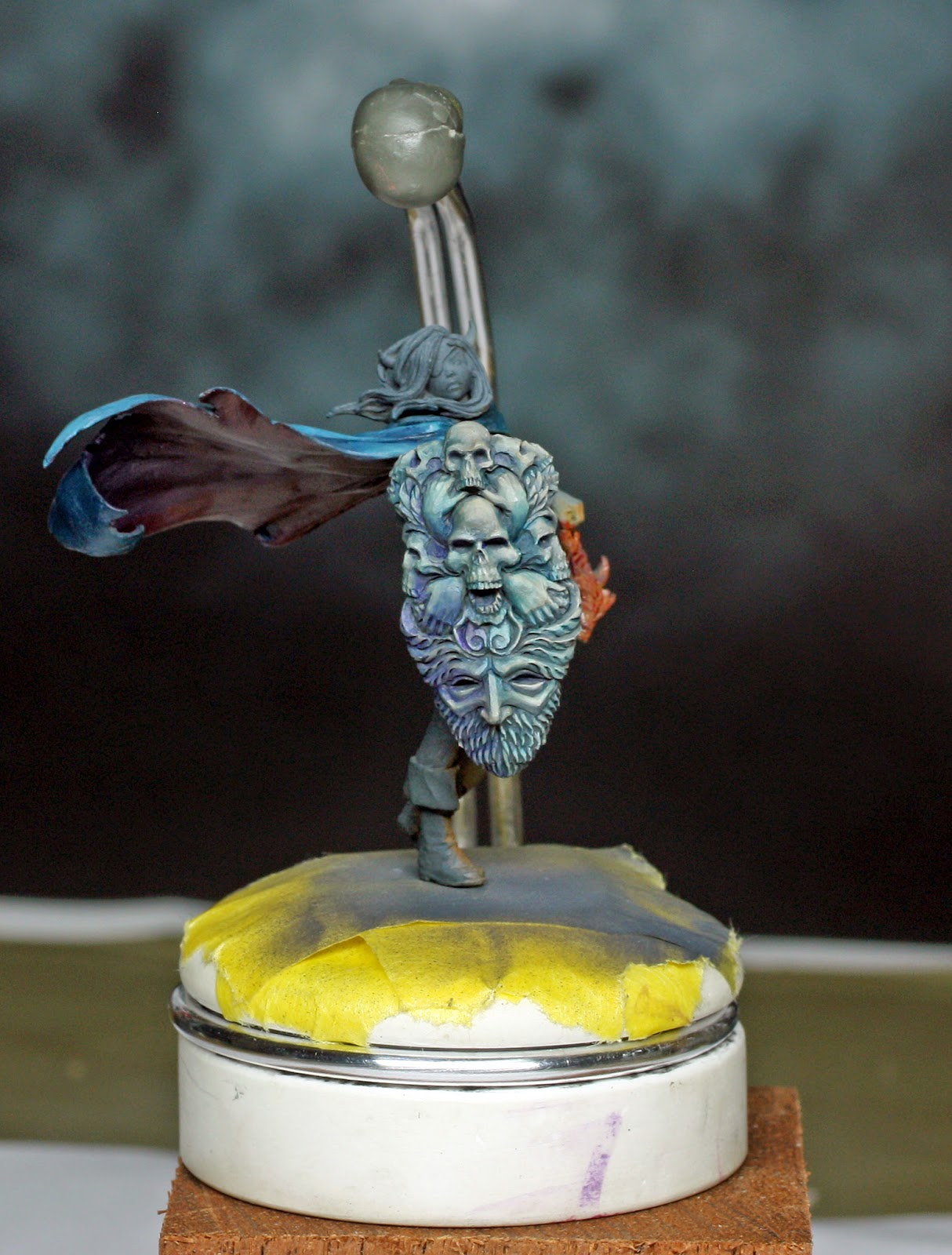 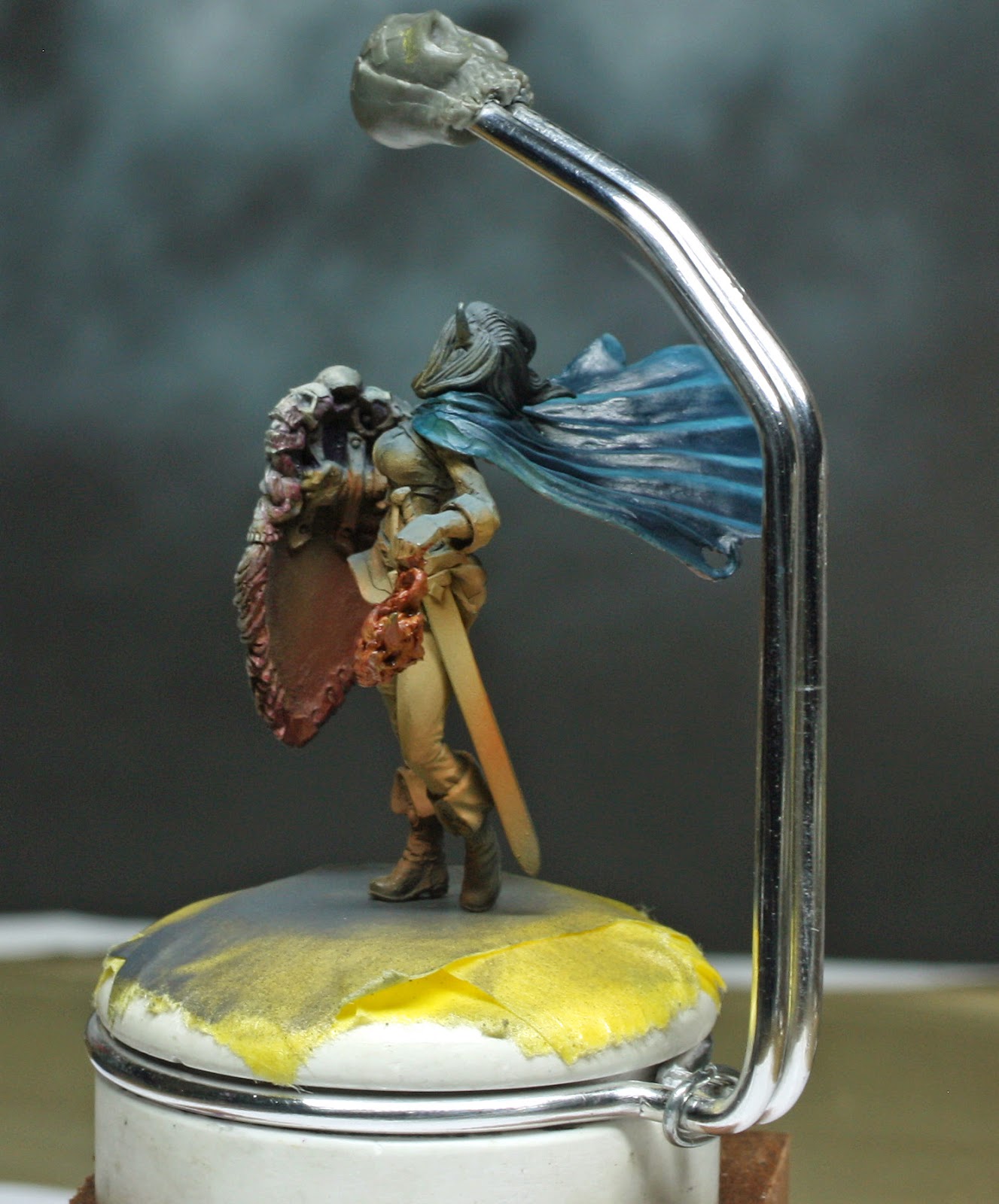 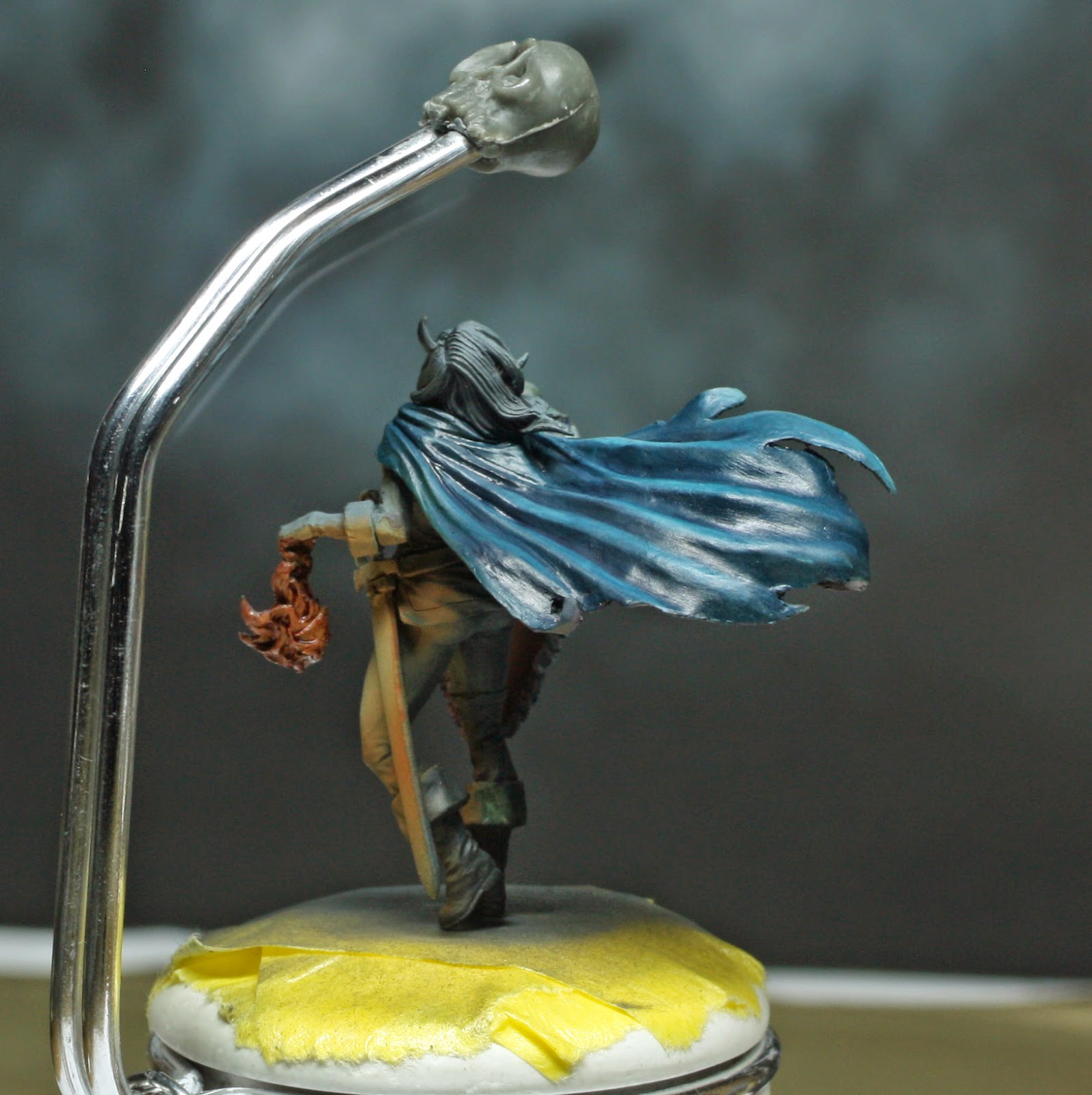 At this stage I used some of the inks to start colouring in the cloak on both sides. I need to matt this down to see if it is any good, because the shine is horrendous at the moment!

A slightly shorter update than usual perhaps, but I've been tucked into the Walking Dead and the Leftovers in the last few weeks too, so table time has been less, plus I've been so busy with work that surfing the hobby forums, blogs and sites has been diminished somewhat too.

Oh, one other thing. Lady Grimdark picked up a win in the WAMP Synthesis competition.
I haven't entered any online contests for a while now - I used to regularly enter them on Wamp, and there is always a good competition going on there - so it was nice to place. It was a "just for fun" competition too, and Lady G was always a fun piece anyway, so all in all very pleased. ^_^

Until next time, cheers all!